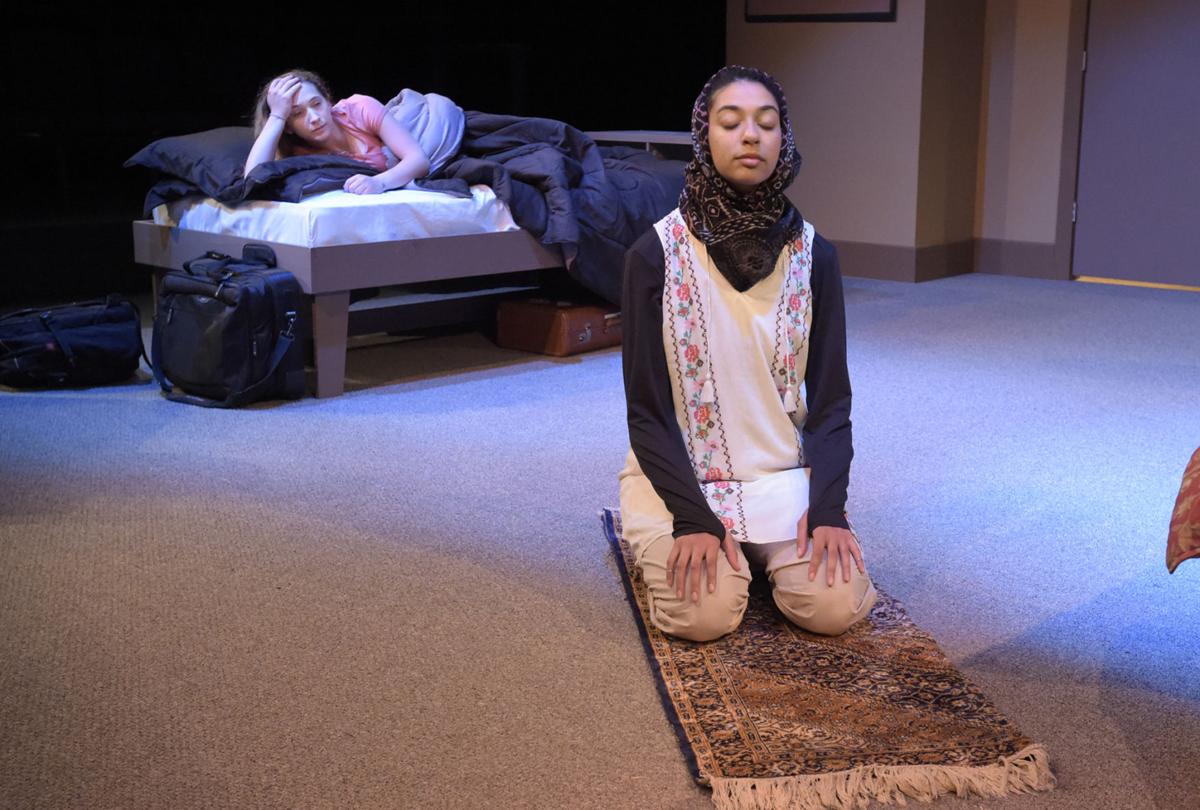 Sumaiya, played by Falyn Lazarus, says her morning prayers as roommate Chelsea played by Hannah Costa looks on during a recent rehearsal of the Linn-Benton Community play "Peace Be Upon You." The play, written by Dan Stone, opens Thursday night in the Russell Tripp Performance Center. 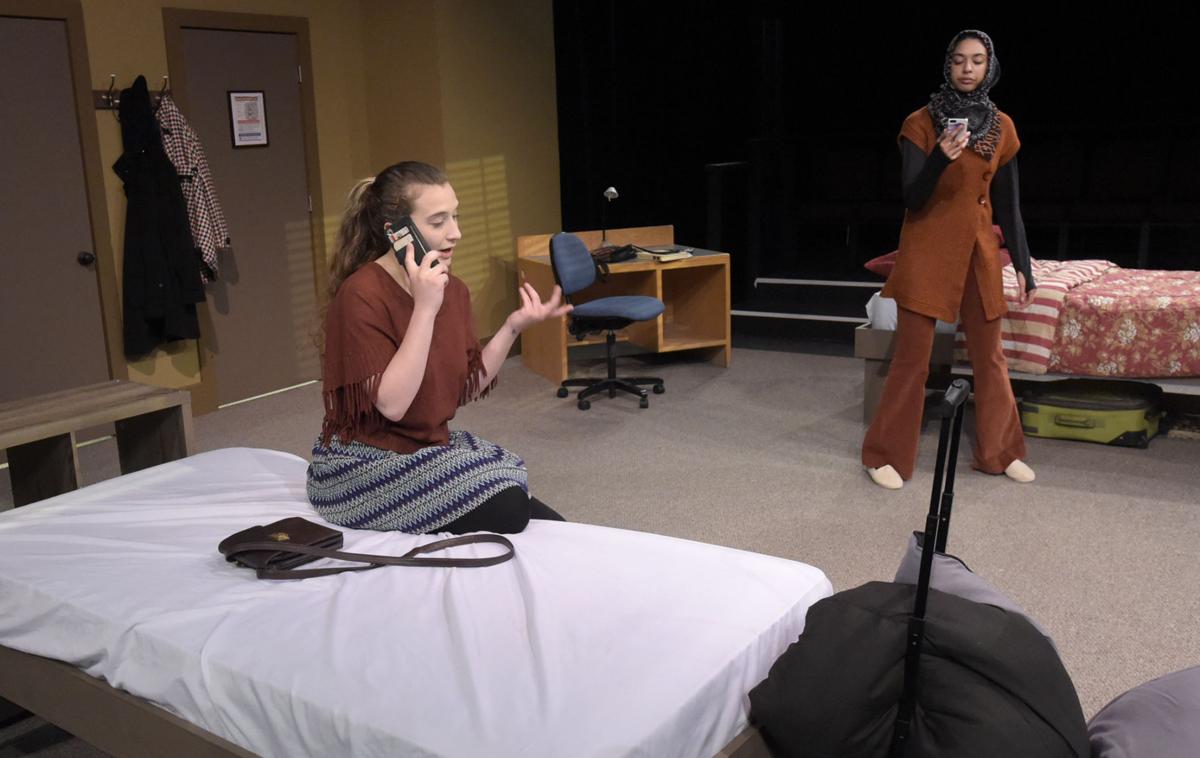 Chelsea, left, played by Hannah Costa and Falyn Lazarus as Sumaiya are college roommates who must put aside their cultural differences in the LBCC play "Peace Be Upon You."

Every other year, the Linn-Benton Community College Theater Department creates a community-engaged theater production about the people around us we don't know.

"We look at micro-communities within our larger community that has a story to tell," says LBCC Theater Director Dan Stone. "They are all original plays about people who live around us, and it's a big part of what we do."

The latest play, "Peace Be Upon You," which was written by Stone, focuses on a Middle Eastern college student living in Oregon. It will debut Thursday night in LBCC's Russell Tripp Performance Center, and be followed by three more performances Friday and Saturday.

LBCC has produced community-engaged theater for the past six years. Previous plays have focused on smaller communities, including military veterans with post traumatic stress disorder in the Willamette Valley, Latinos living in Independence, loggers and their families, and the elderly. The 2019 production, in the early stages of development, is a children's play that will center on ecosystems in Oregon.

Each production takes about a year to complete, and start with interviews and story circles featuring community members, Stone said. That's part of the reason why these productions are staged every other year.

For "Peace Be Upon You," Stone found inspiration inside his classrooms, where more students from the Middle East were taking his courses.

"This is it," Stone remembered thinking. "We need to do a play about people of the Islamic faith from the Middle East living in rural Oregon."

"I would like to thank Yalda Asmatey and her wonderful project, 'This American Muslim,' for her inspiration and expertise," Stone added.

Stone and his crew interviewed students from LBCC, Oregon State University and University of Oregon.

"The thing about this process is we never know what the story is going to be until we start talking to people," Stone said. "The play dialogue and situations often times come right out of the interviews."

He said during the interviews with students and community members, certain comments kept appearing: "We're just like everyone else." "We're human beings." "We are regular people."

Stone said, "We had to come up with a play that showed these people in that light. They are regular people with regular problems."

The 90-minute play follows Sumaiya, a young college student, played by Falyn Lazarus, attending a nonspecific university in Oregon. She is living in her dorm room with roommate Chelsea (Hannah Costa).

Chelsea is your typical 21-year-old young woman, whose only real knowledge of the world and the Middle East has come from the news, which isn't always accurate, Stone said.

The two learn more about each other by living together.

Kase (Kase Allouzi), who is Sumaiya's brother, and Zach (Cole Haenggi), who is a kind of love interest, are other characters in the play.

"Peace Be Upon You" will be performed in a more intimate black box setting, where actors and the audience will be on the stage of the Russell Tripp Performance Center. It seats around 80 people, Stone said.

He hopes audiences will walk away from the play with more compassion and a better understanding of people in the community they don't know.

"A woman walking down the street wearing a hijab is not a bad person. She's a human being with feelings, a sense of humor and emotions," Stone said.

PEACE BE UPON YOU

WHAT: "Peace Be Upon You"

HOW MUCH: Tickets are $10 general, $7 for students and seniors, $5 for children. Advance tickets available at linnbenton.edu/tickets or at the box office one before curtain.

Sumaiya, played by Falyn Lazarus, says her morning prayers as roommate Chelsea played by Hannah Costa looks on during a recent rehearsal of the Linn-Benton Community play "Peace Be Upon You." The play, written by Dan Stone, opens Thursday night in the Russell Tripp Performance Center.

Chelsea, left, played by Hannah Costa and Falyn Lazarus as Sumaiya are college roommates who must put aside their cultural differences in the LBCC play "Peace Be Upon You."