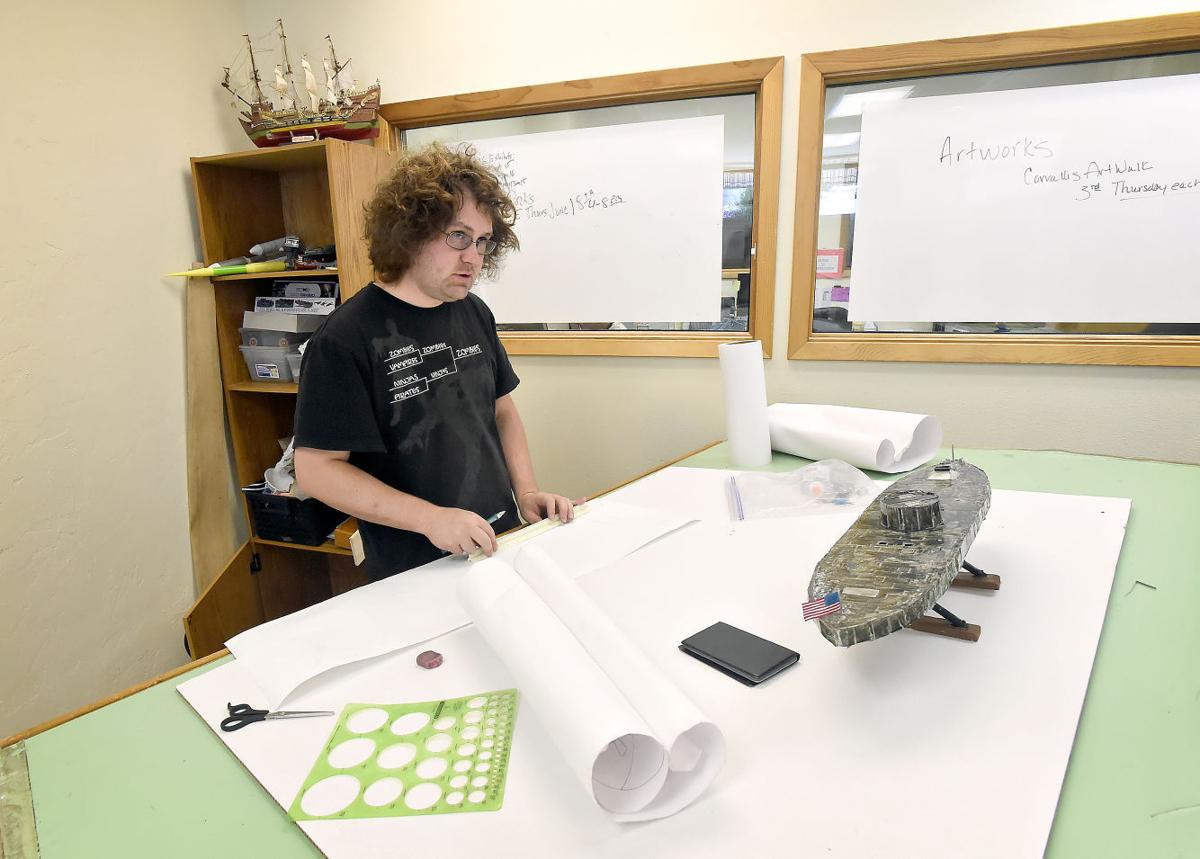 Patrick Hackleman works at drafting his nautical model, the Turtle, which was the world’s first submersible with a documented record of use in combat. 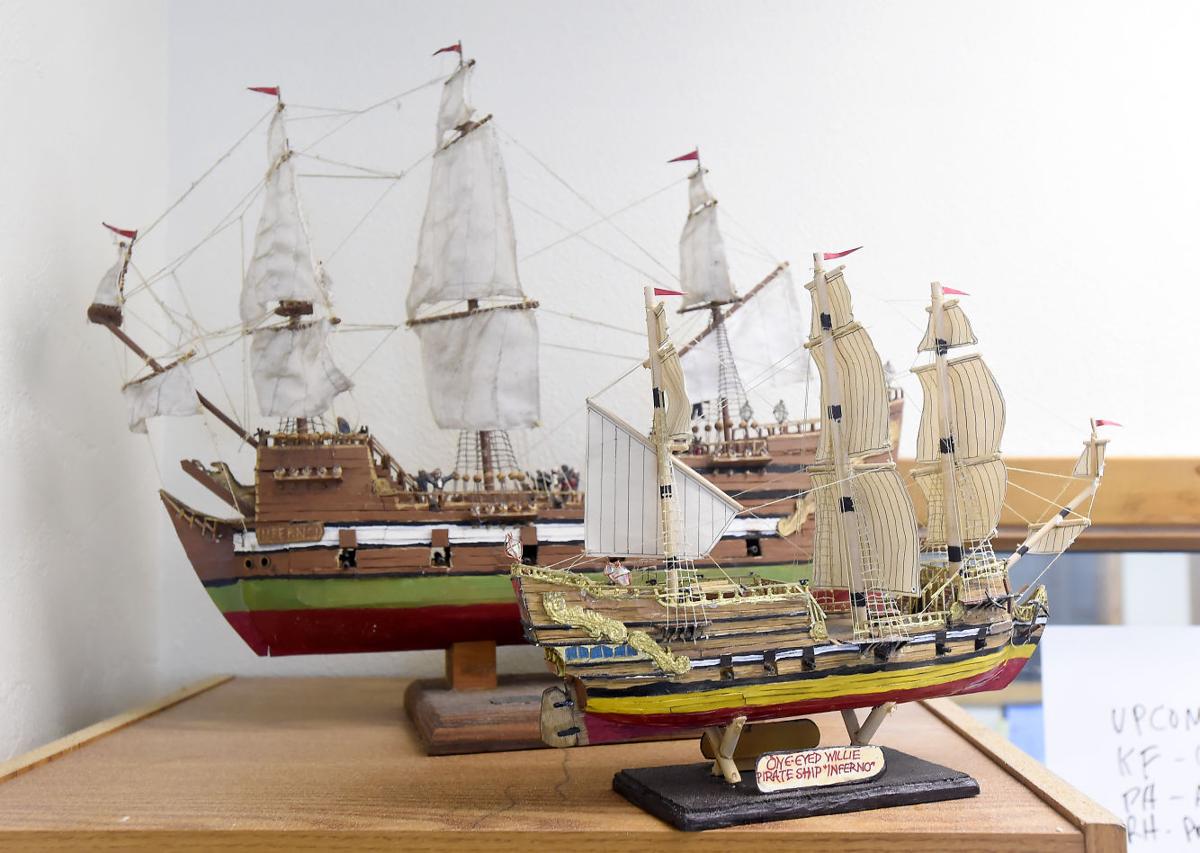 Two scratch-built models of the pirate ship from the movie “The Goonies” were built by Patrick Hackleman. 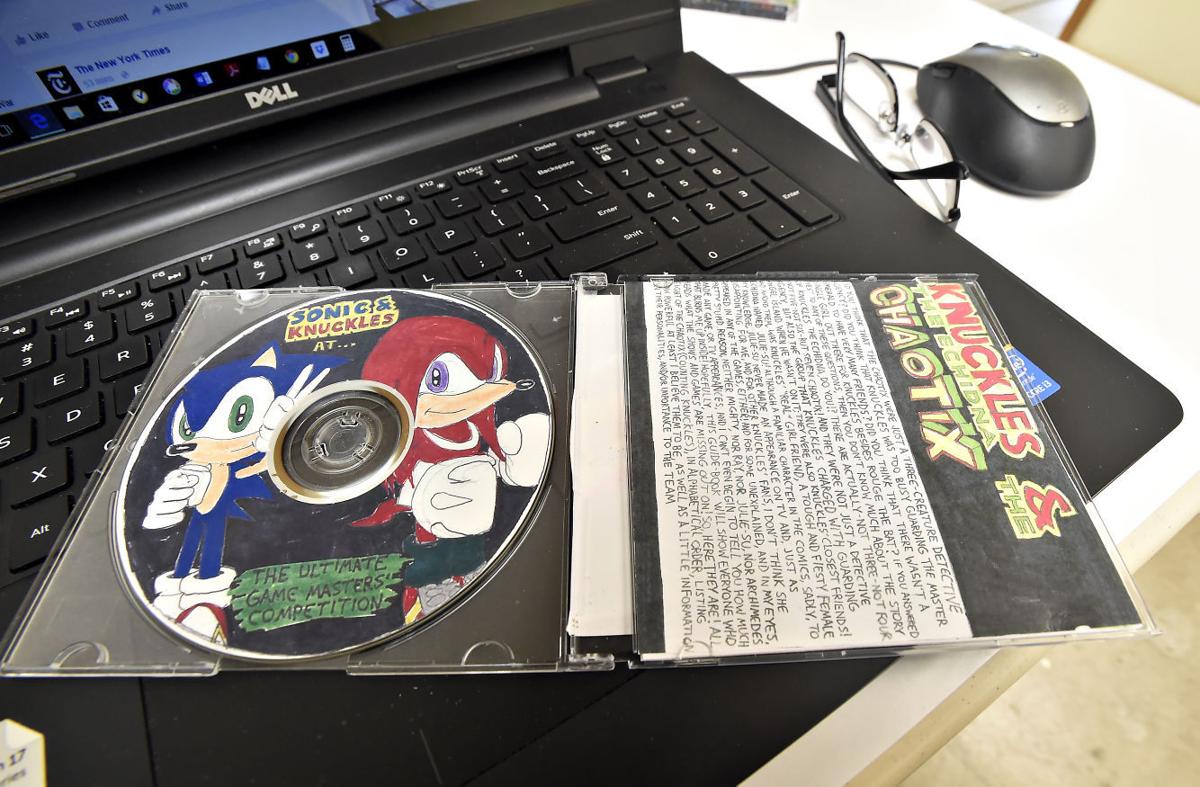 In addition to nautical models, Patrick Hackleman has been creating fan fiction.

Patrick Hackleman's freehand drawings of old warships are so finely detailed they could easily be mistaken for blueprints.

The 34-year-old Corvallis native, who was diagnosed as in the spectrum of autism at a young age, is receiving attention from galleries and art enthusiasts all over the country for his models and drawings, which are done to scale.

"I started getting into them [ships] in the third grade, when we were studying the Titanic," Hackleman said.

As Hackleman talked, he worked on a drawing of the American Turtle (the first submersible used in combat) on his drafting-style table with a pencil and three-sided ruler. A model he built of the U.S.S. Monitor, an ironclad steam ship from the Civil War, rested near the top of his table.

Guided by photographs or his own drawings, he makes boat and warship models from scratch using plastic, wood and other materials. When he was younger he built the pirate ship from the movie "The Goonies," which won a blue ribbon at the Benton County Fair. He's made another one since that he displays atop a bookshelf near his work space.

Hackleman's parents, George and Kathy, said they encouraged their son to make his own models when he was growing up, because he would often spot inaccuracies in the design of store-bought model kits of Civil War, World War I and World War II boats, warships and aircraft carriers.

His dad says his son likes to get things exactly right. Sometimes, though, that isn't easy because accurate records are not always available.

And, sometimes, sources that might seem reliable are mistaken: The two of them once watched a show about the history of Japanese WWII battleships, and Hackleman immediately pointed out an error in a stock photo displayed.

"He looked up and said, 'That's the Matsui, not the Yamato,'" George said.

His parents also took him on a tour to see the U.S.S. Texas a few years ago, and Kathy says he was able to answer more questions about the historic battleship than the tour guide.

Hackleman, who has lived in a group home since he was 18, has produced so many models and scrolls of drawings over the years that his parents were unsure what he could do with all of them.

Bruce Burris, who for 35 years has helped artists launch their careers, came into the picture to help. He is the director of a program and studio called ArtWorks, which works in conjunction with Collaborative Employment Innovations (CEI) to help adults considered to be disabled with job placement and provide them a workstation for art projects.

Hackleman met Burris for the first time at Cornerstone Associates, where he's worked part-time in a wood shop since the late 1990s. On that day, Hackleman was giving his friends gifts he had made: Reillustrated and rewritten "Sonic the Hedgehog" comics with special cases containing a CD-ROM and inserts. He said he enjoyed watching the TV show when he was younger.

Burris was impressed with the illustrations and learned from his colleagues that Hackleman did more. When Burris saw Hackleman's detailed sketches of ironclad warships from the Civil War, he knew there could be a market for the art.

"You can really see his hand in them. He creates them with this idea that they can still be improved," Burris said.

In fact, Hackleman believes that with certain modifications, some of the ships he so painstakingly re-creates could have avoided their historical fates.

For example, he wants to draw up plans for his own version of the Titanic.

"To him they [boats] are very much living, breathing creatures. He sees them in many ways, perfectly, and as more than what is there," said George Hackleman.

To get an assessment of just how marketable Hackleman's models, comics and warship illustrations could be, Burris used his art organization, Outpost1000, to put together a pop-up art exhibit at the ArtWorks building last year. He was blown away by the reception the pieces received.

"What you're seeing with Patrick, is he uses the program as a studio a few days a week," Burris said. "He's really doing his own thing, and I'm encouraging him."

Burris serves as coach for the artist and tries to create opportunities for the public to see Hackleman's models and drawings. One gallery on the East Coast, the Galerie Christian Berst in New York (also with a location in Paris) is handling his warship models, and has commissioned more. Hackleman has a theory why.

"The East Coast probably has pretty big interest in them, because that's where they were built and where they fought," he said.

The gallery featured some of his artwork at its annual exhibit at the National Art Dealers Alliance art fair in Miami earlier this month. Burris says the models are particularly popular with this gallery, and Hackleman has had to change his approach of creating due to the high demand.

"Now we're working to build up parts of his inventory that had been sort of dormant, while he was doing things of more interest to him," Burris said.

This has involved Hackleman working exclusively on the models and drawings for the Galerie Christian Berst, until December. He began over the summer.

"Some days he's grouchy about the whole thing," Burris said.

Hackleman's work will be included in the Outsider Art Fair in New York City in January, and Burris says two of his drawings were recently purchased by a collector in Washington, D.C.

Hackleman said he's very concerned about copyright laws, which is why he gives his "Sonic" comics as gifts. He has completed two of five versions of his Sonic stories (they total more than 1,000 pages), and says he is planning to write a sequel story to the animated series "Bubble Gum Crisis." He'll call the sequel "Bubble Gum Overload."

"I may not be expecting profits from the comics, but the ships are a different story," Hackleman says. "I also like doing it [drawing] for fun."

His parents say they have seen a maturation in him, because he's doing something he enjoys, and people appreciate the art.

"A lot of the time he communicates through his drawings. More recently, he's done more with understanding what people see in his art," George Hackleman said.

Patrick Hackleman works at drafting his nautical model, the Turtle, which was the world’s first submersible with a documented record of use in combat.

Two scratch-built models of the pirate ship from the movie “The Goonies” were built by Patrick Hackleman.

In addition to nautical models, Patrick Hackleman has been creating fan fiction.