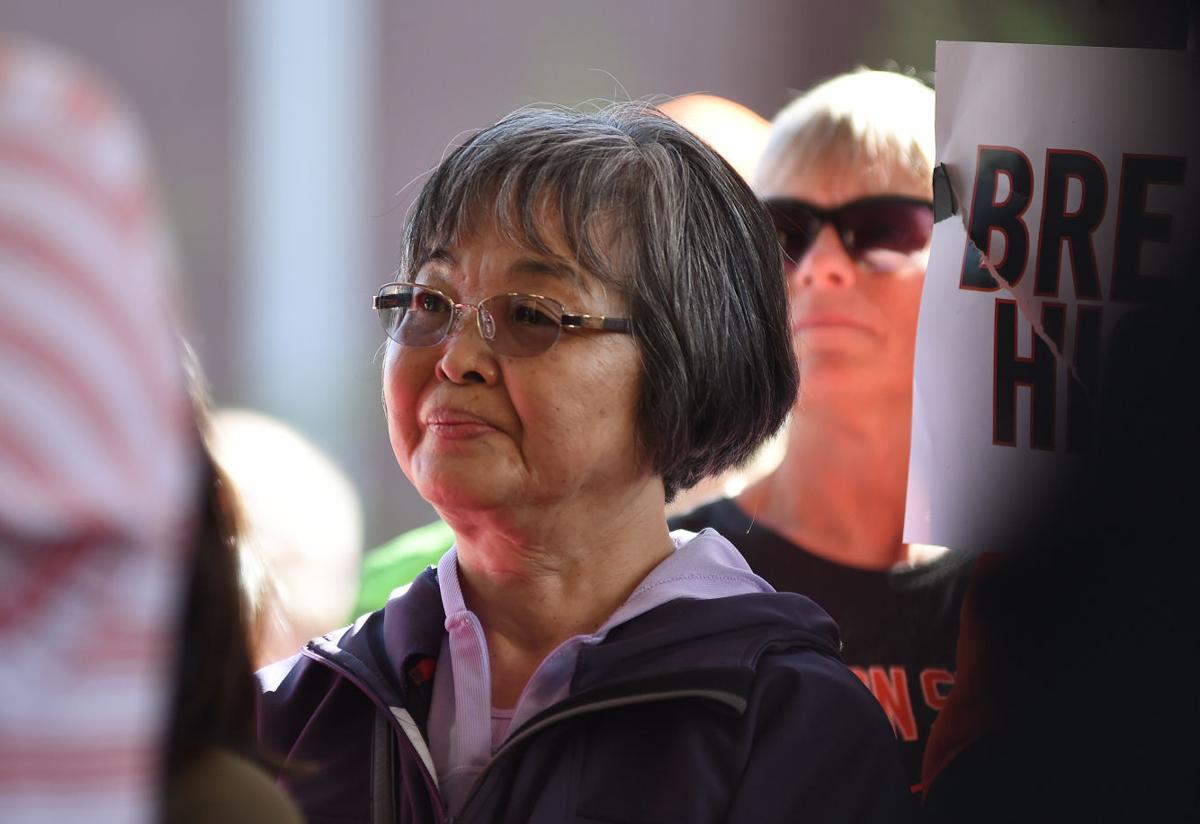 Former Oregon State Beavers women’s basketball coach Aki Hill waits for the team to arrive in Corvallis on Tuesday after their Elite Eight win. The Beavers will face Connecticut in the NCAA Women’s Basketball Final Four in Indianapolis today. 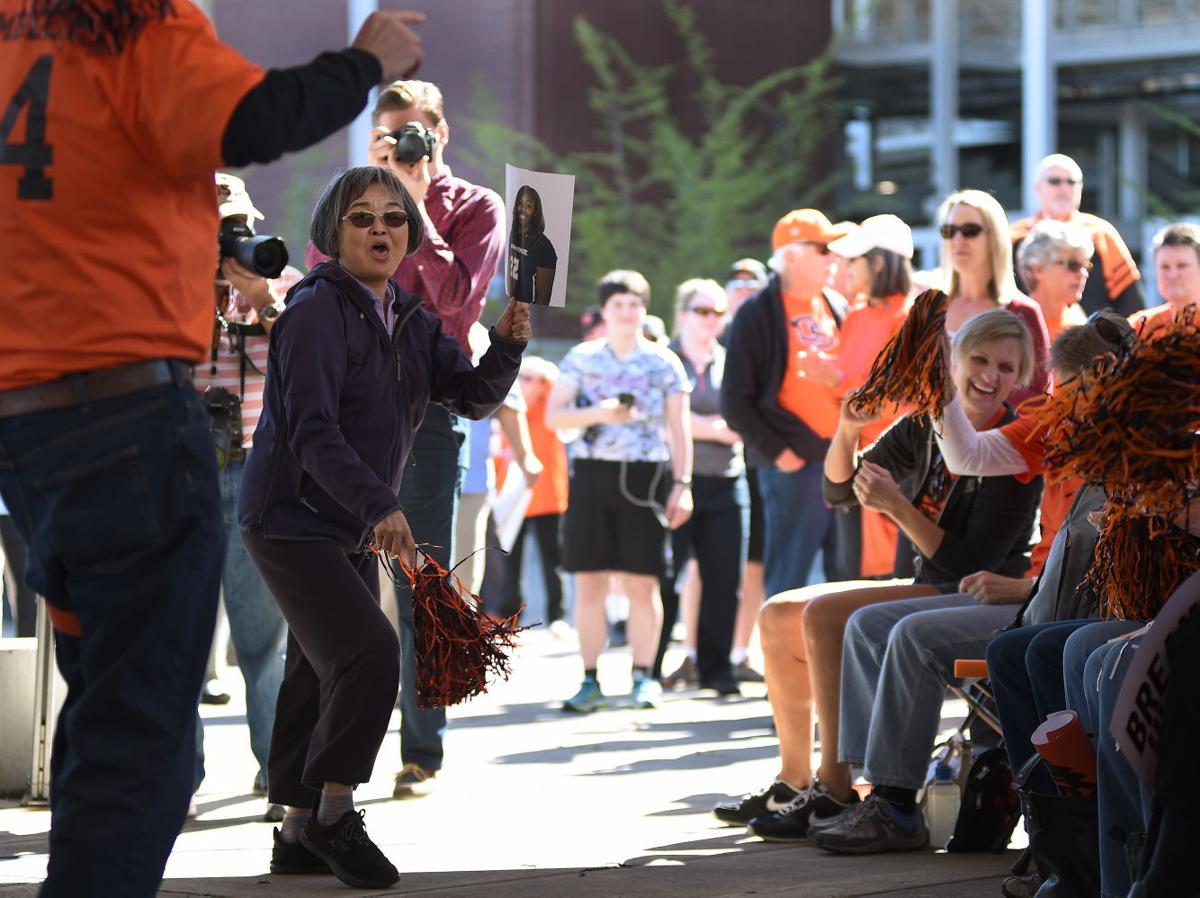 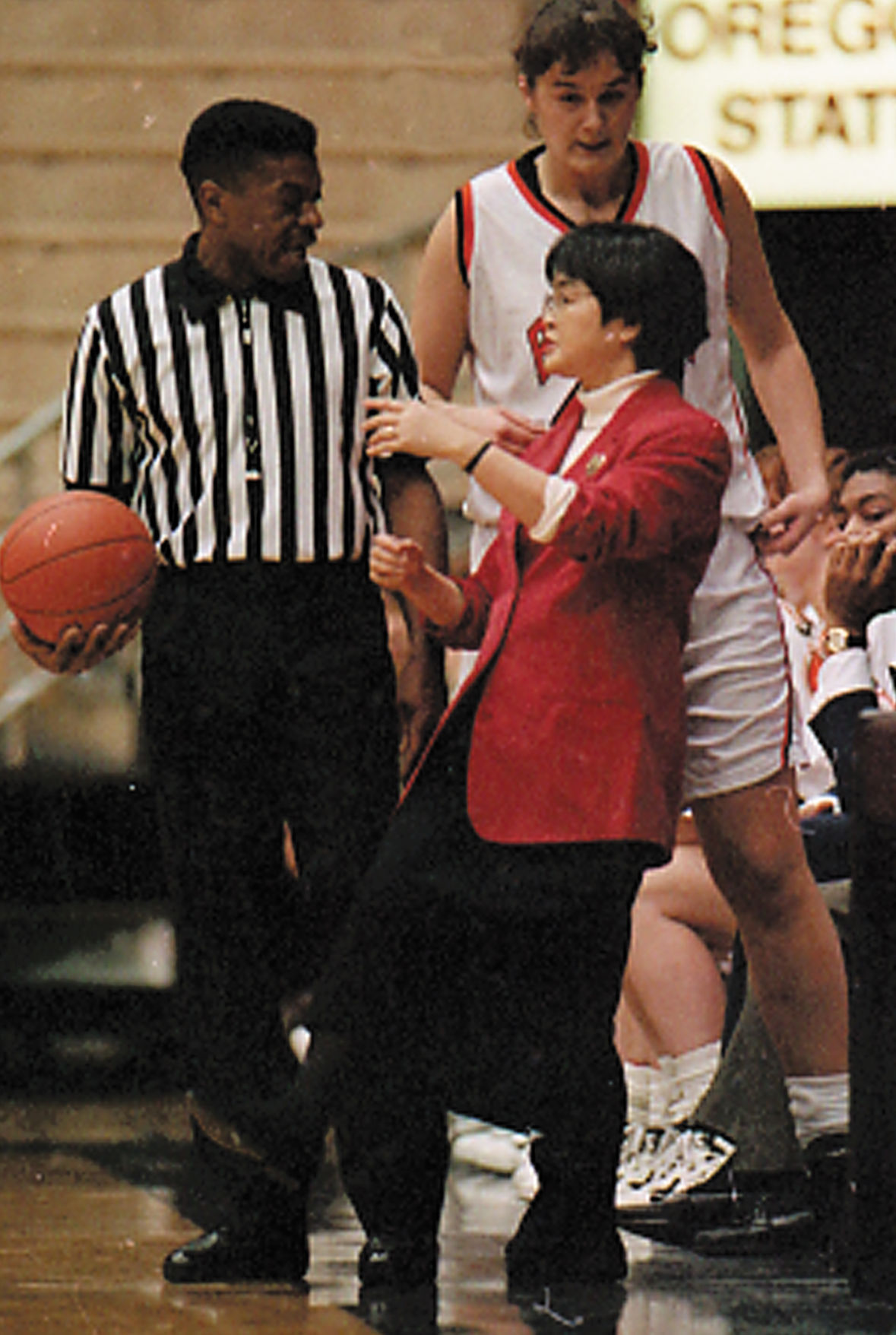 Aki Hill talks with an official during a mid-1990s basketball game at Gill Coliseum. Hill believes the current women’s basketball squad at Oregon State University is the best ever.

Aki Hill doesn’t want the Oregon State University women’s basketball team to be giant killers. She wants them to be giants, a perennial powerhouse in the postseason.

And on Tuesday, a day after the Beavers advanced to the Final Four for the first time in program history, the former Beavers coach was in a state of bliss.

“I cherish this team. I love this team. They’re so beautiful to watch,” exclaimed the 76-year-old North Albany resident.

She joked that she felt five years younger, and raved about OSU’s half-court offense, the ability of role players to step up and the coaching of Scott Rueck and his staff.

Hill coached the Beavers for 17 years before resigning in 1995 with a school record 274 victories. But there’s no doubt this is still her team.

“The opportunity to play UConn is amazing,” Hill said. “They play defense, and they can run, too. They will seek the opportunities to run the fast break as often as they can. Controlling the tempo is important.”

Strong passing and phenomenal 3-point shooting distinguish recent Beaver teams, Hill said. And the squad doesn’t just space the floor, but moves without the ball. “The art of the passing game to the moving person is disappearing,” she added.

Hill noted that Baylor, who the Beavers beat on Monday, focused on stopping Jamie Weisner and Sydney Wiese, two of OSU’s stars. And that left Gabriella Hansen wide open on the weak side. “This cool-as-a-cucumber Hansen, she made shots,” Hill said.

She broke from the interview for a moment to retreat to her office, and when she returned she brought back a copy of legendary UCLA coach John Wooden’s book, “Practical Modern Basketball.”

She turned the page to Wooden’s Pyramid of Success, and pointed to the top section, “Competitive Greatness: Be at your best when your best is needed. Enjoyment of a difficult challenge.”

During the Baylor game, “What happened was this one, top of the pyramid,” Hill said.

She mentioned how Wooden, who brought home 10 national titles with UCLA, didn’t see success as winning.

“Success is peace of mind attained only through self satisfaction in knowing you made the effort to do the best of which you’re capable,” reads Wooden’s definition.

“Trying to win has meaning. It’s to develop our whole potential,” Hill said. And Wooden’s version of success applies for everyone from a star to a bench player to the team manager.

Americans sometimes overemphasize winning, Hill said, rather than the journey.

She pointed to the early struggles faced by this year’s OSU seniors — who went 10-21 as freshmen — as valuable experiences, not failures, and she added that she loved when Rueck talks about the squad’s natural progress. “They blossomed,” Hill said.

She credited Rueck and his staff for being able to recruit incredibly well out of a bad situation, as the team went 9-21 in his first year.

Recruiting is important to sustaining a program, and Hill said that she was fortunate in her first year as coach to land Carol Menken-Schaudt, a 6-foot-5 center who wasn’t recruited at all after playing a season at Linn-Benton Community College.

Menken-Schaudt became a star, leading OSU to the postseason and winning an Olympic gold medal in 1984. She still holds several team records.

Hill also dismissed criticism of Connecticut for being too dominant, likening the Huskies’ impact to that of Stanford in the Pacific 12 Conference. Coach Tara VanDerveer has led the Cardinal to two national championships and 22 Pac-12 regular season titles since 1985-86.

“Stanford was very, very important to the Pac-12. Because of Tara’s hard work, we were trying to beat Stanford. How many teams became stronger?” Hill asked.

This year, the Pac-12 had three teams in the Elite Eight, including Stanford, and has Washington and OSU in the Final Four.

“Now it’s not just Stanford fighting all by themselves, which they did for a long time,” Hill said.

And while she roots for the Beavers, Hill would love to see the Pac-12 bring a national title back to the West Coast.

While Hill is thrilled for the current OSU team, which she called the best ever, she’s just as excited for the Beaver boosters.

“Some people have been supporting us behind the bench for 30 years,” Hill said. “They are so patient. That’s the reason I stayed here. That’s my university.”

For complete coverage of the OSU women's basketball team, see Sports, beginning on B1, and our special Game Day insert.

Former Oregon State Beavers women’s basketball coach Aki Hill waits for the team to arrive in Corvallis on Tuesday after their Elite Eight win. The Beavers will face Connecticut in the NCAA Women’s Basketball Final Four in Indianapolis today.

Aki Hill talks with an official during a mid-1990s basketball game at Gill Coliseum. Hill believes the current women’s basketball squad at Oregon State University is the best ever.