Gizmos, gadgets and great ideas at innovation expo
0 comments
Share this
{{featured_button_text}}
1 of 2 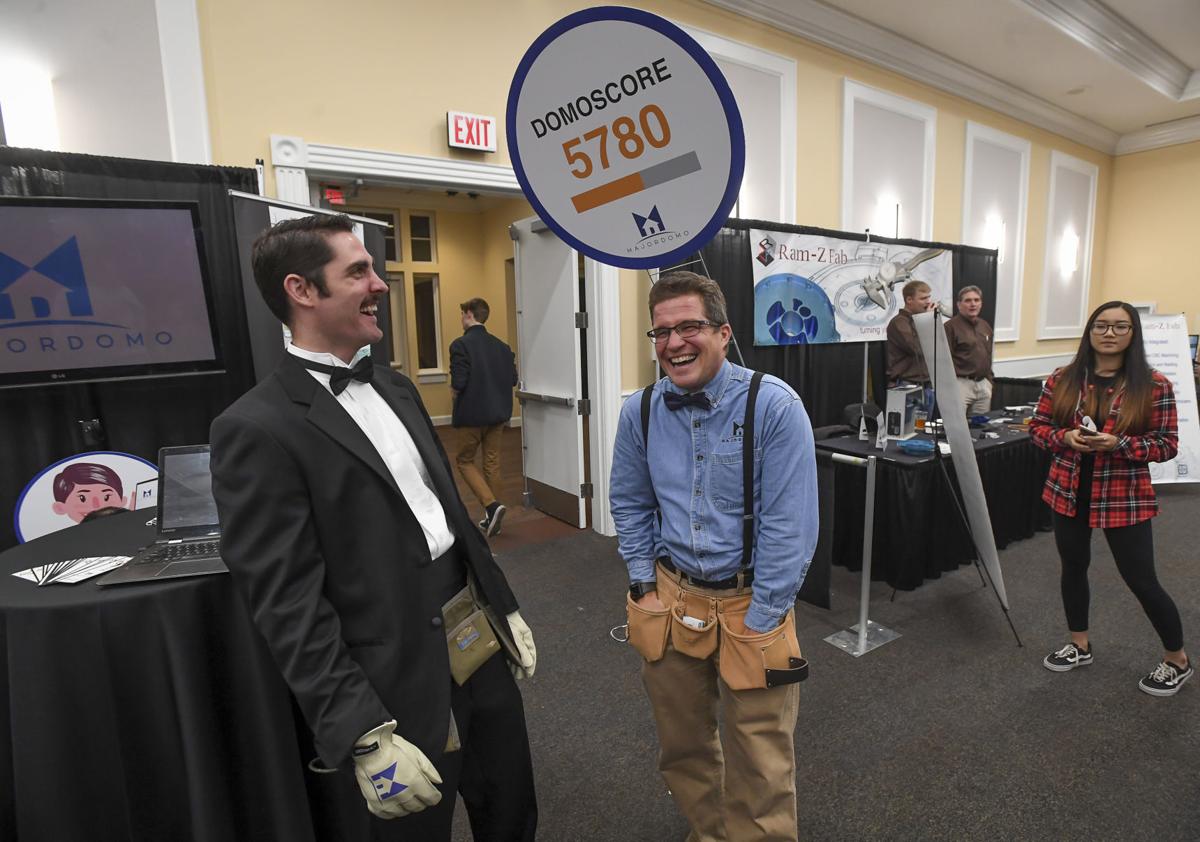 James Furlo, left, and Lee Eckroth had a booth at the WIN expo to share information about their new venture, Majordomo. 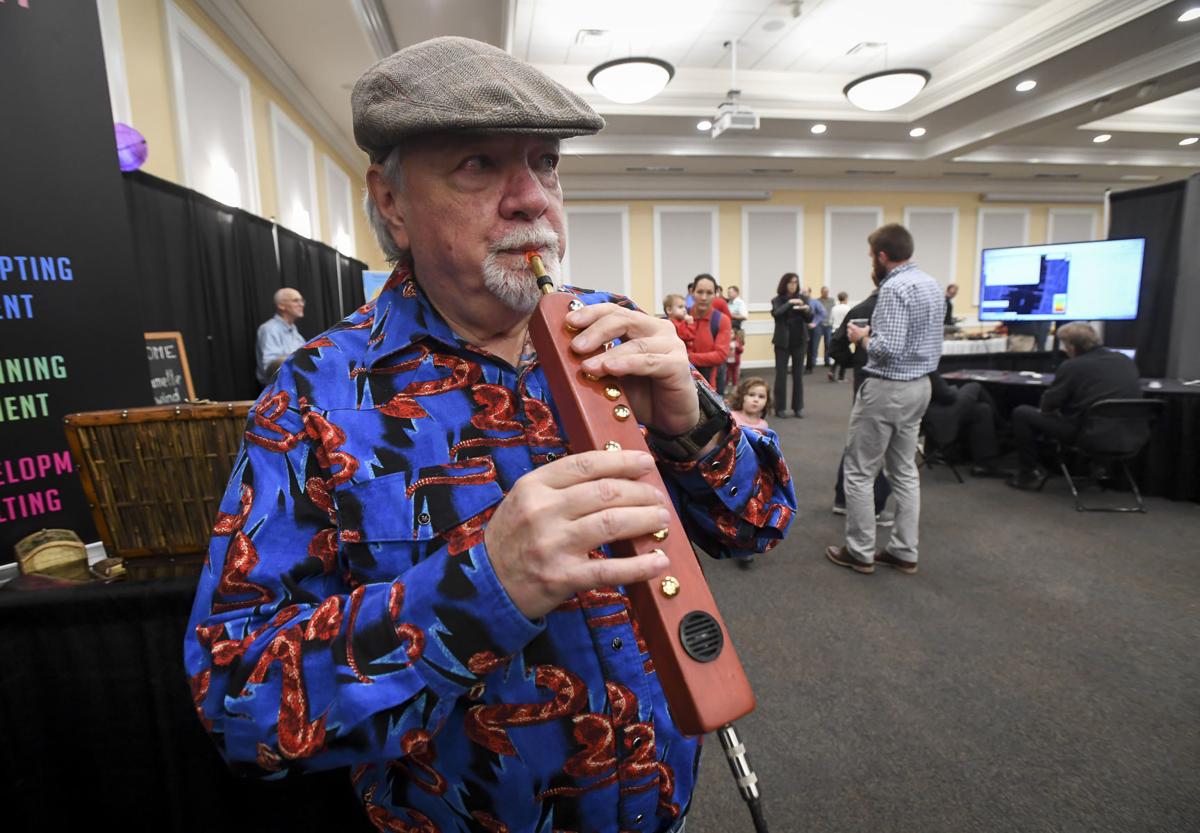 Brad Stewart of Eugene demonstrates the AeroSynth at the WIN expo Thursday night at the CH2M Hill Alumni Center.

With the Willamette Innovators Network annual expo you’re never quite sure what you are going to get. So you walk into the CH2M Alumni Center … keep your eyes open … and find …

Lee Eckroth wearing some sort of harness with a big sign attached. It looks like a thought balloon has erupted out of his head. And he’s styling a bow tie. And a tool belt. And a new project.

It’s called Majordomo, and, no, it doesn’t mean he no longer sells real estate or helps the Rotary Club of Greater Corvallis keep rotating. The new venture just has turned his normal 60-hour week into a 100-hour week. Or so he says.

Majordomo, though, has links to Eckroth’s real estate work. He and long-time friend James Furlo started the start-up to help people make better decisions about their current homes — or their future homes. Getting a “domoscore” by answering 22 questions is designed to help homeowners hone in on what improvements their current home might need and link them with professionals who can help.

“We’re still in startup mode,” Eckroth said, “but we think that this tool we are creating can help homeowners make better decisions … and wind up building better communities.”

So how will Majordomo make money?

“We’ll figure it out,” Eckroth said.

Around the corner was a guy who looked like he was playing an instrument from the Star Wars cantina scene. Brad Stewart of Eugene was at the WIN expo to demonstrate the AeroSynth, a modest-looking wooden wind instrument that when linked to a laptop, tablet or smartphone can take you in hundreds of directions.

In just a few short notes Stewart went from trombone sounds to piccolo trumpet and after dialing up a blues backing track on his laptop he laid out a harmonica solo, with all of the noise burping out of a Simmons amp.

“There’s nothing on the market like this,” said Stewart, a master electrical engineer. “It’s a self-contained synthesizer. Anyone can pick this up and start playing the blues.”

The AeroSynth has a seven-octave range, and Stewart is hoping to add bagpipes to the repertoire, an idea he got from a recent trip to Scotland. Stewart said he is still working on a few details, such as iPhone and Android interfaces, and that he hopes to have the AeroSynth on the market soon.

Down the middle aisle is a massive board game display from Corvallis-based Massif Games, which focuses on 3D mountaineering games. Founder and CEO Corey Wright, an Oregon State University chemistry graduate, got the idea when he was backpacking in the French Alps. And a pre-med career path wound up on a new trail, entrepreneurship.

A three-sided piece juts up about two feet from the game board. Thus the mountain — and the 3D.

Wright, also a venture catalyst with the Regional Accelerator and Innovation Network, said he received lots of assistance and mentorship from the thriving start-up scene in Corvallis. And he showed his fundraising chops by reeling in $145,000 from a Kickstarter campaign, a record for the region.

Wright says the game’s “outdoorsy theme is different than a lot of other games on the market.”

He also sees an opportunity to change the way people think about the outdoors, noting that half of the “characters” in the game are women and that he hopes his “wide range of characters will help convince more kids to get into mountaineering … and out into the woods.”

Wright said he already has 2,000 orders in hand. He had hoped to ship in August but says February or March is more realistic.

“That’s how things go sometimes,” he said, “But I want to ship it out right.”

How you can find and put money into 'recession-proof' investments

How you can find and put money into 'recession-proof' investments

How to maximize your credit card rewards

How to maximize your credit card rewards

James Furlo, left, and Lee Eckroth had a booth at the WIN expo to share information about their new venture, Majordomo.

Brad Stewart of Eugene demonstrates the AeroSynth at the WIN expo Thursday night at the CH2M Hill Alumni Center.