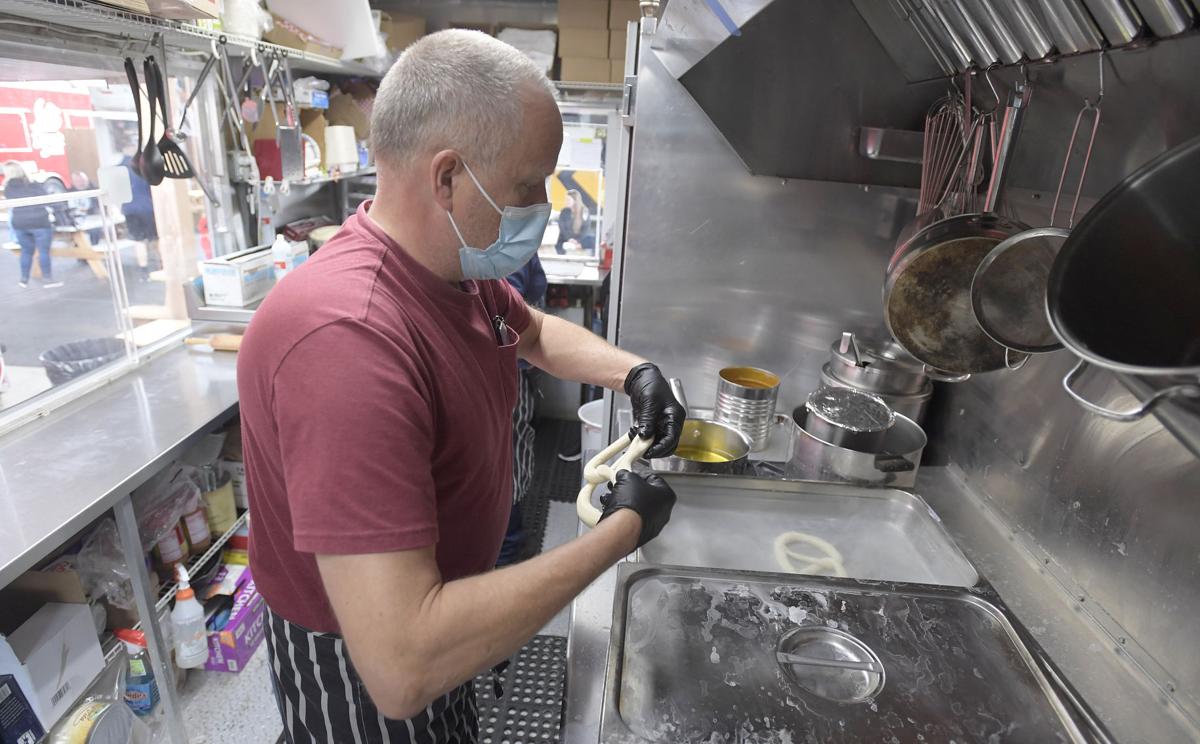 Chris Peterson prepares to drop a pretzel in water at Peterson's Pretzels, a food cart at the Barn in North Albany. 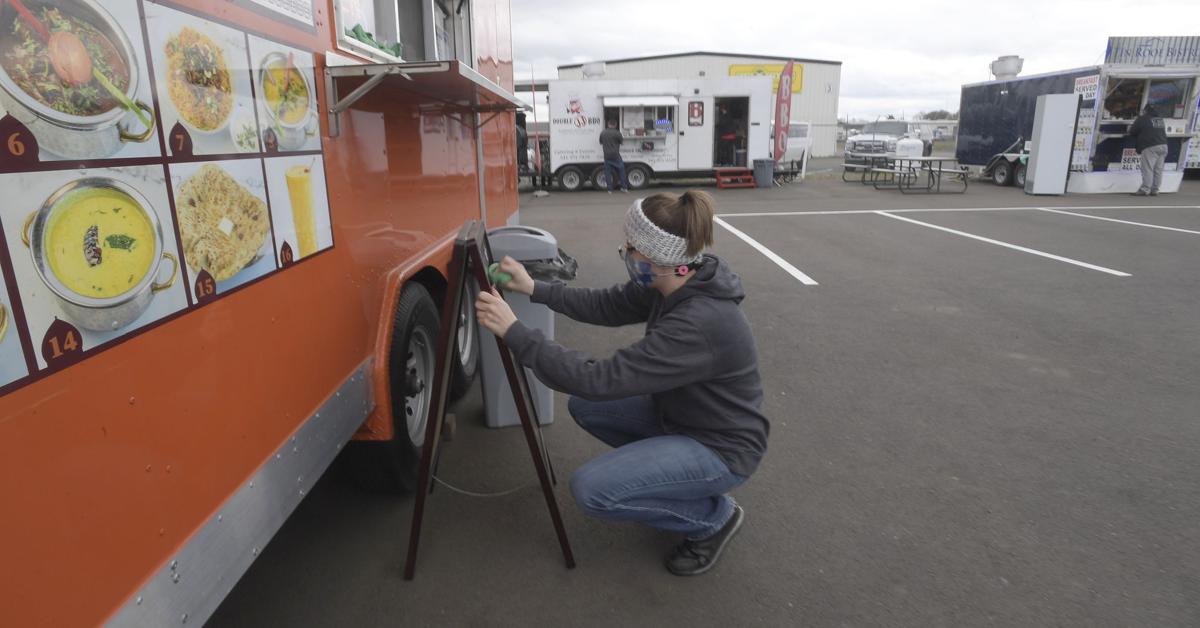 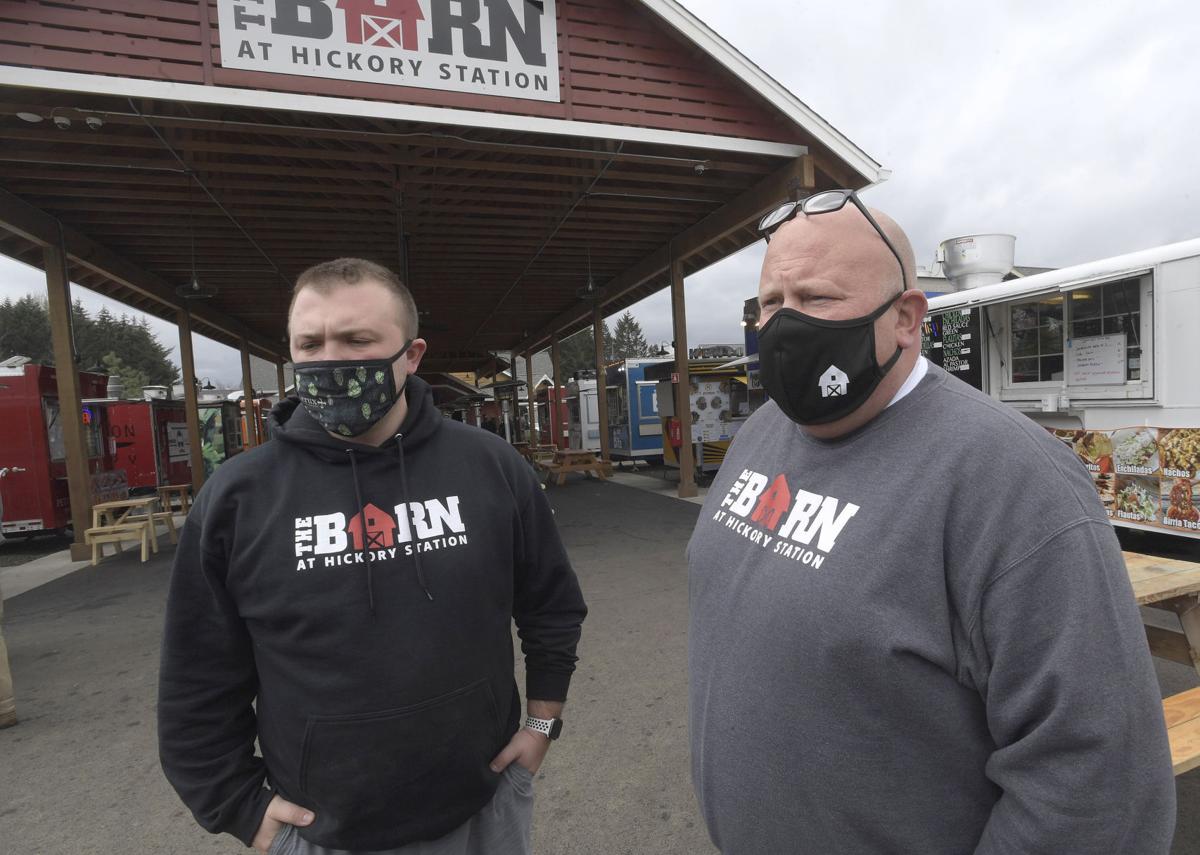 Alex Hovelsrud, left, and his father Brian Hovelsrud have a waiting list of carts hoping to join the Barn, their food cart pod in North Albany. 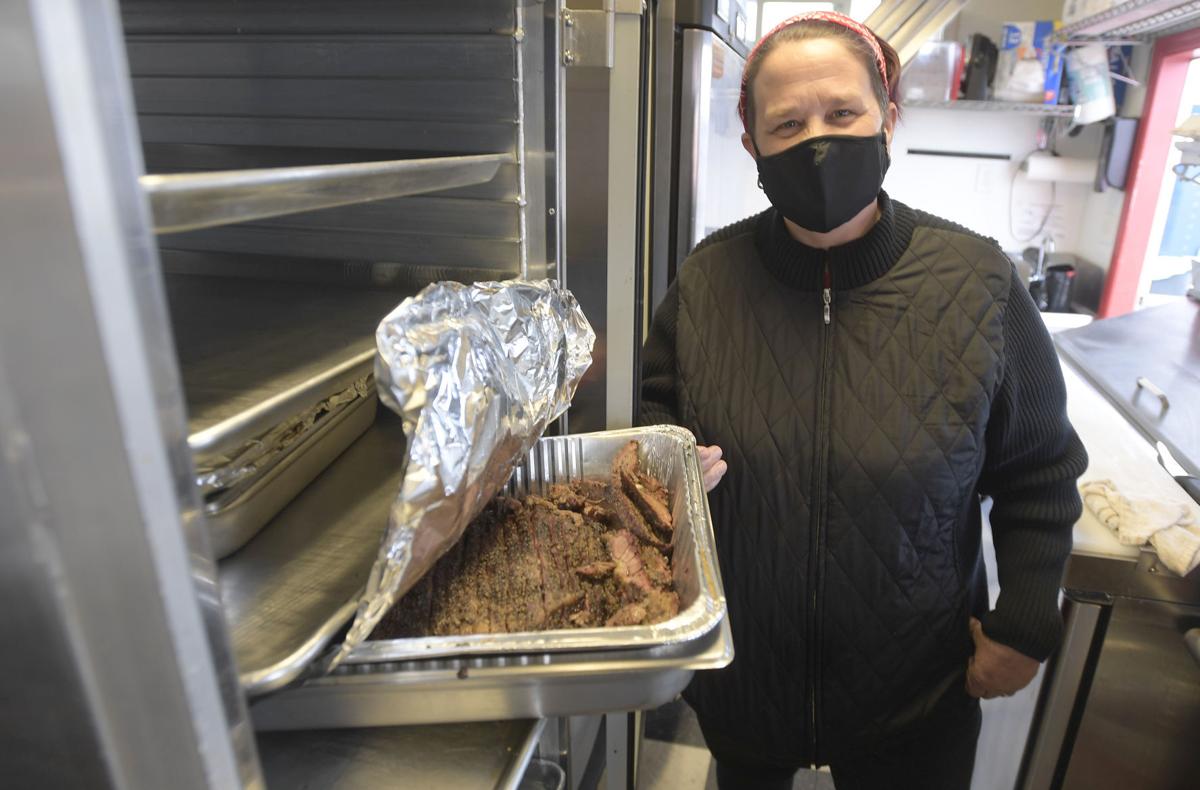 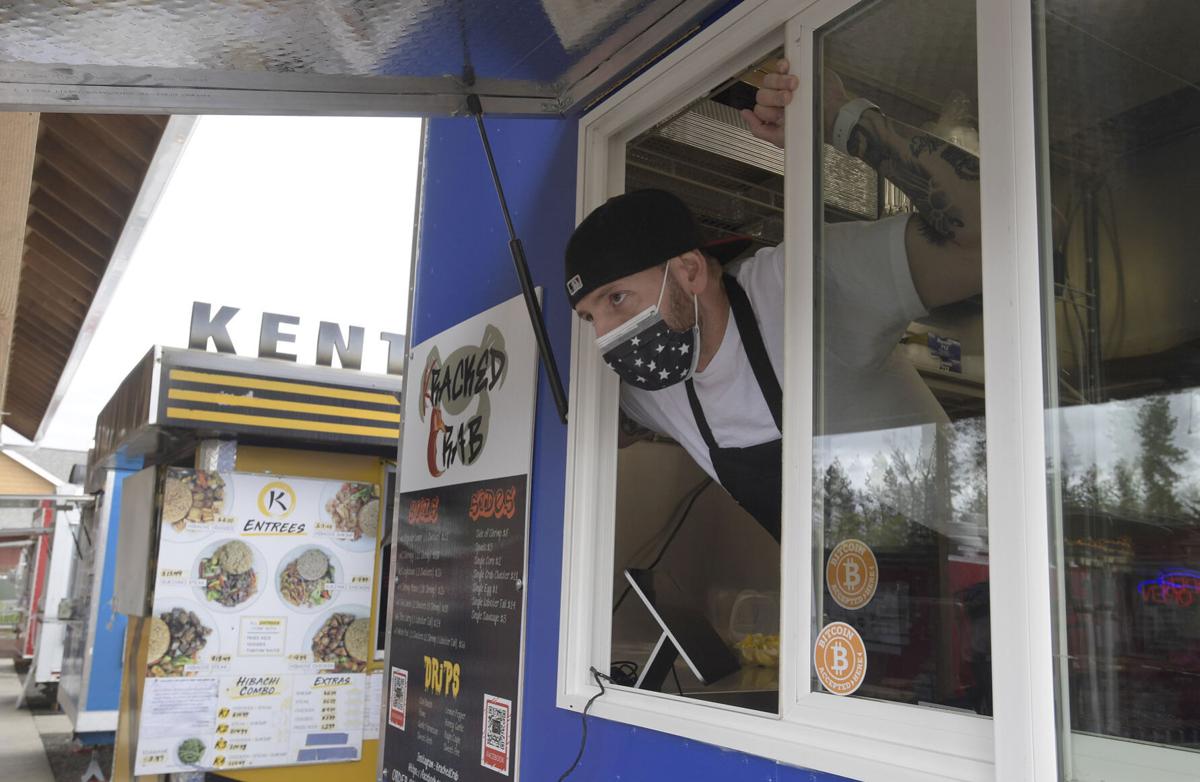 Todd Daily said that business has been going great for the Kracked Crab, which opened in the Barn in North Albany about a month ago. 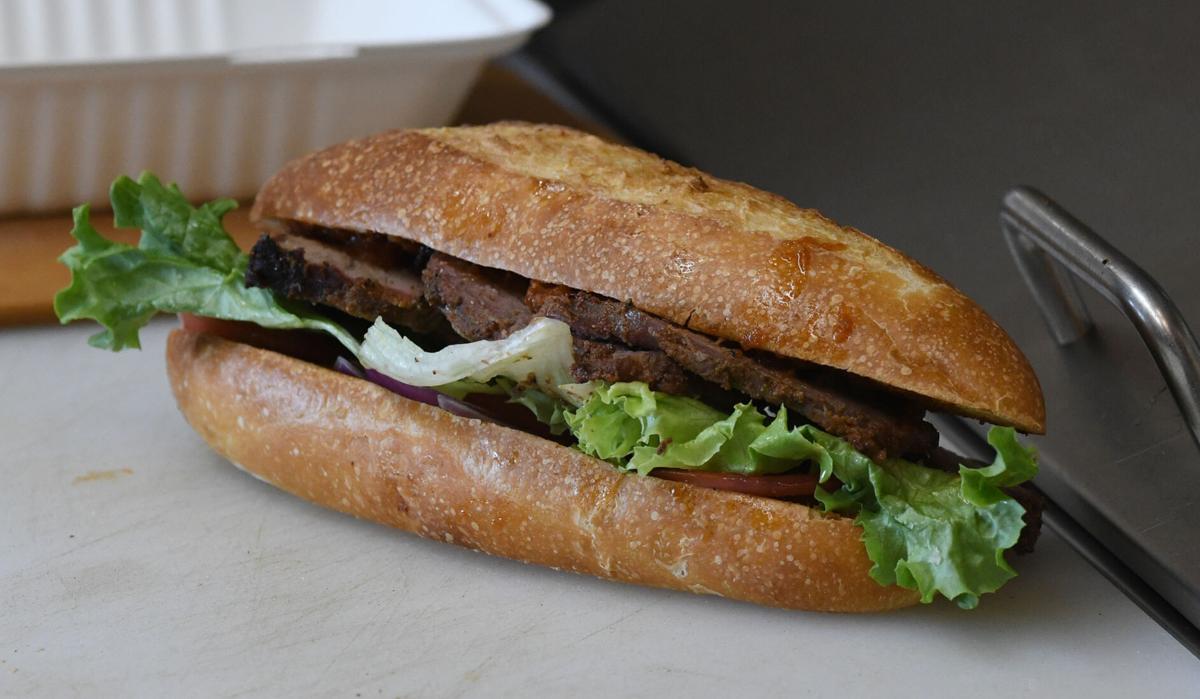 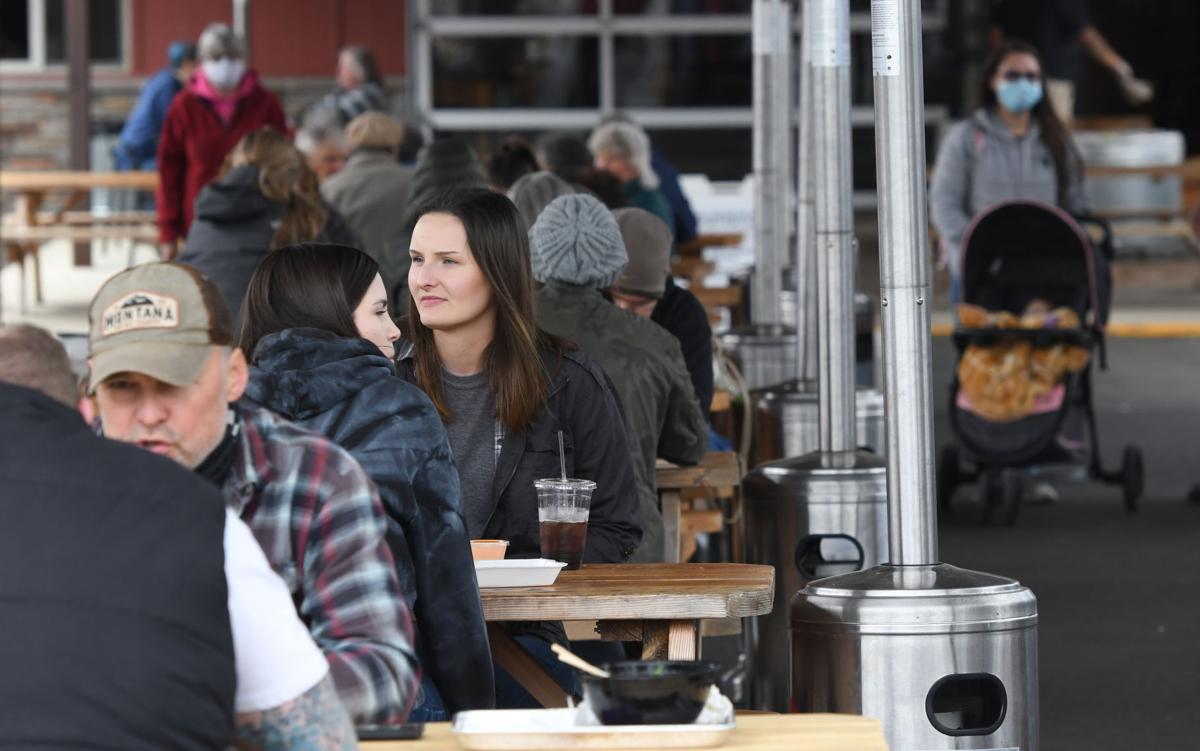 The Barn at Hickory Station has picnic tables set up under a covering as well as more seating in a grassy area.

Food carts and food cart pods were able to weather the storm of the pandemic or perhaps even benefit because they were built for to-go orders and people feel more comfortable dining in the open air, said mid-Willamette Valley business owners.

“The pandemic encouraged more people to try food trucks than before,” said Chelsea Headrick, whose family owns Henry’s Food Court in Millersburg. The pod has six food carts — including one that opened directly due to the pandemic — and will soon add a seventh.

“The ability to have outdoors seating makes a huge difference,” said Brian Hovelsrud, owner of the Barn at Hickory Station in North Albany, a pod that has 13 food carts and a huge picnic-style shelter.

Hovelsrud said his business hasn’t been hammered as bad as sit-down restaurants by the pandemic, but things would be going far better without a 50% capacity limit and other COVID-19 regulations.

“Playing the numbers game can be difficult at times,” added Hovelsrud, who carried a clicker-style counter in his hand. “Most people are understanding about having to wait to come in. We’re ready for a little more normalcy. Well, I’m sure it’s not just us.”

For both the Barn and Henry’s, variety is a major advantage. Visitors can choose from tasty options at each food cart pod.

The timing for food carts has been right in a much different way, as well, as residents no longer look down at “taco trucks” and other eateries that aren’t brick and mortar.

“The stigma of eating food from a food cart is gone. Some of the best food you can get in town comes out of our food carts now,” Hovelsrud said.

Here’s a closer look at the Barn at Hickory Station and Henry’s Food Court.

Cart owners at Henry’s Food Court said they’ve benefited from new construction in Millersburg and a lack of other dining options in the fast-growing town.

The food cart pod sprang up in 2018 to meet the needs of truck drivers, including those at the new Love’s truck stop nearby.

While transportation workers frequent Henry’s, mid-valley residents make up the bulk of customers, according to the consensus from food cart owners. After all, why make the short drive to Albany or Jefferson for grub if you don’t have to?

About 10 years ago, she literally had a dream about opening up such a shop. She said that during the pandemic she realized that the only people making money were drive-through restaurants such as fast food joints.

“I cashed out one of my IRAs and we’ve been running this,” Enzler said. “It was like a no-brainer. ‘This is my opportunity.’”

Cinco Estrellas Taqueriea Y Antojitos got a little bit busier during the pandemic when restaurants were forced to close, acknowledged owner Francisco Farias. The business is now looking to expand with another food cart, potentially in Corvallis.

Many of Cinco Estrellas customers are construction and landscaping workers in Millersburg, as well as recent transplants moving into new homes, said Bryant Farias, Francisco Farias’ son. “Millersburg is getting a lot bigger,” he added.

And that’s good news for Henry’s. “I love our locals,” said Heidi Carver of Tin Roof Bistro, which sells burgers, shakes and more, and also has a location at the Yard in Salem, another food cart pod.

Other options at Henry’s Food Court include: Royal India Cuisine, which has a sit-down restaurant in Eugene; Double JJ BBQ, which used to be off Pacific Boulevard in Albany; and Mill Town Coffee, which features beans from Sisters Coffee.

When the Barn opened in June 2019, it had five food carts, but that quickly increased.

The food cart pod seemed poised to take off in 2020, but the pandemic forced the cancellation of music, class reunions, tap takeovers by microbreweries and other events scheduled for the site last summer.

“We assume we’ll be semi back to normal by summertime,” said Alex Hovelsrud, Brian’s son, and another owner in the Barn.

Live music is scheduled every Friday and Saturday from June until September, as artists are eager to play. Music may even expand to Thursdays and Mondays.

The food cart pod will be switching to summer hours and will be open on Mondays, as well as open an hour later each day.

One of the newest options at the Barn is Kracked Crab, which also has a location in Happy Valley Station near Portland. Owner Todd Daily said business has been “crazy,” and he’s a firm believer in the diversity of choices offered at food cart pods.

“Everybody can find something they love,” he said.

Another relative newcomer is Majahua Authentic Mexican Food. Lisbeth Escalera used to sell homemade tamales from her North Albany house. In September, she opened up her food cart, which is named after the small town in Mexico she’s from.

“This is a dream for me,” Escalera said.

Chris Peterson said his family’s food cart, Peterson’s Pretzels, came down from Alaska to open up in the mid-valley in January. “My business is doing better than it ever has here,” he said. “It’s been a really good, positive move. Our exposure has increased drastically.”

Other options at the Barn include: Curbside Bacon; Family Pho; Aloha Kitchen; High on the Hog, a barbecue cart; Big Sisters Thai Kitchen; On Any Sundae; Dreaming of Sushi; Los Vecinos Authentic Venezuelan Food; The Local Bite, which sells sandwiches, wraps and more; and Kento Hibachi.

Abi Plum and Haley Downer were enjoying lunch recently at the Barn. “My husband and I come here all the time. It’s our favorite place in Albany,” Plum said.

“Same with me and my husband,” Downer added.

While Plum said she loved trying all the different options, Downer said she generally stuck to her favorites, such as pretzels. Her husband loves Kento Hibachi.

“Any group that comes here can find something,” Downer said. She added that she liked the taphouse, too, which has 48 beverages, including local craft brews.

Mitchell Knight, with his dog Princess Peach, ordered from Majahua Authentic Mexican Food and talked about how much he enjoyed food carts, including the variety of food cart pods, the quality of the meals, and seeing the cleanliness of the mobile kitchens.

But there was something more about the interactions at food carts.

“It cuts out the disconnect between the person ordering the food and the person making the food,” Mitchell said. “The people are so nice. They really appreciate the support.”

Go to our website for videos featuring Henry's Food Court in Millersburg and the Barn at Hickory Station in North Albany.

Hitting the green: Golf participation surges in mid-valley during the pandemic

Mid-Willamette Valley golf course representatives said they’ve been hitting the green during the pandemic, so to speak, and that business has …

Now's the time: Mid-valley entrepreneurs bet on themselves, despite the pandemic

Erica Baze and Travis Allen had formulated a plan to open up a bar and restaurant, but were waiting for the ideal location.

Local artists have been more productive during the pandemic, as well as expanding their horizons by learning and applying new techniques or tr…

The godfather of the mid-valley brewing scene

Perhaps no person has nourished the mid-Willamette Valley brewing scene more than Joel Rea, the owner of Corvallis Brewing Supply, which recen…

Put the needle on the record: Vinyl sales surge during pandemic

Michele Colomb might not own a restaurant, café or bar, but she’s an important mover and shaker in the mid-Willamette Valley’s food scene than…

Video: The Barn at Hickory Station

Alex Hovelsrud, with his dad Brian Hovelsrud, talks about the options at the Barn at Hickory Station in North Albany. "You'll never go hungry …

Henry's Food Court in Millersburg has seen a boost in popularity due to the pandemic, as people feel safer eating outdoors. Chelsea Headrick, …

Oregon has surpassed 2.5 million jabs in the arm against COVID-19, and more than 1 million people are fully vaccinated against the illness, ac…

In our first segment, reporter Kyle Odegard gushes about the first sour beer ever from Calapooia Brewing Co. in Albany. Black Bog has blackberries and cranberries and it’s tart and fruity and absolutely tasty.

The best tacos in the mid-valley

Thanks Mom – Culinary Comfort Celebration, a Benton County dining event, is back for an encore starting Wednesday and continuing through Sunday.

Terra Brown said she started her Corvallis food cart, Terra’s Tastee Treats, because she didn’t really have a choice. Due to the novel coronav…

Chris Peterson prepares to drop a pretzel in water at Peterson's Pretzels, a food cart at the Barn in North Albany.

Alex Hovelsrud, left, and his father Brian Hovelsrud have a waiting list of carts hoping to join the Barn, their food cart pod in North Albany.

Todd Daily said that business has been going great for the Kracked Crab, which opened in the Barn in North Albany about a month ago.

The Barn at Hickory Station has picnic tables set up under a covering as well as more seating in a grassy area.