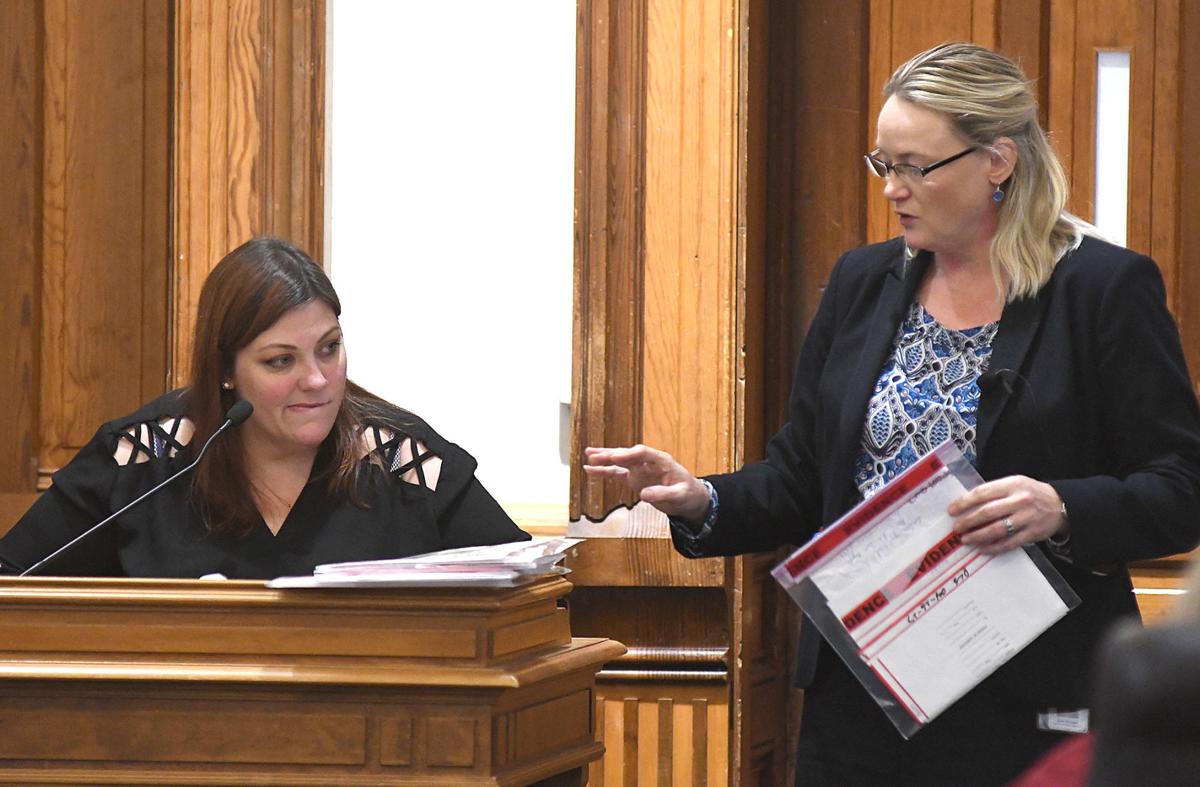 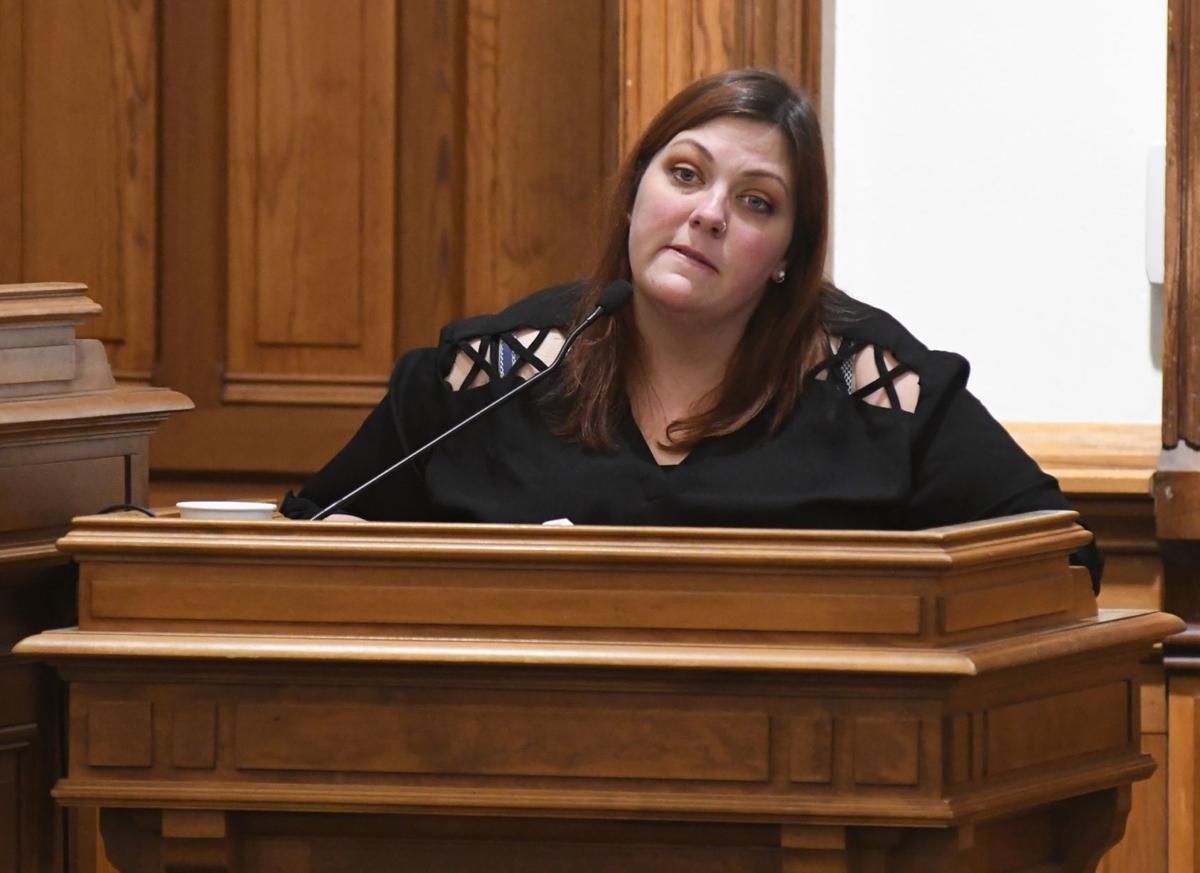 Michelle Chavez testified for nearly six hours Thursday as a witness for the prosecution. 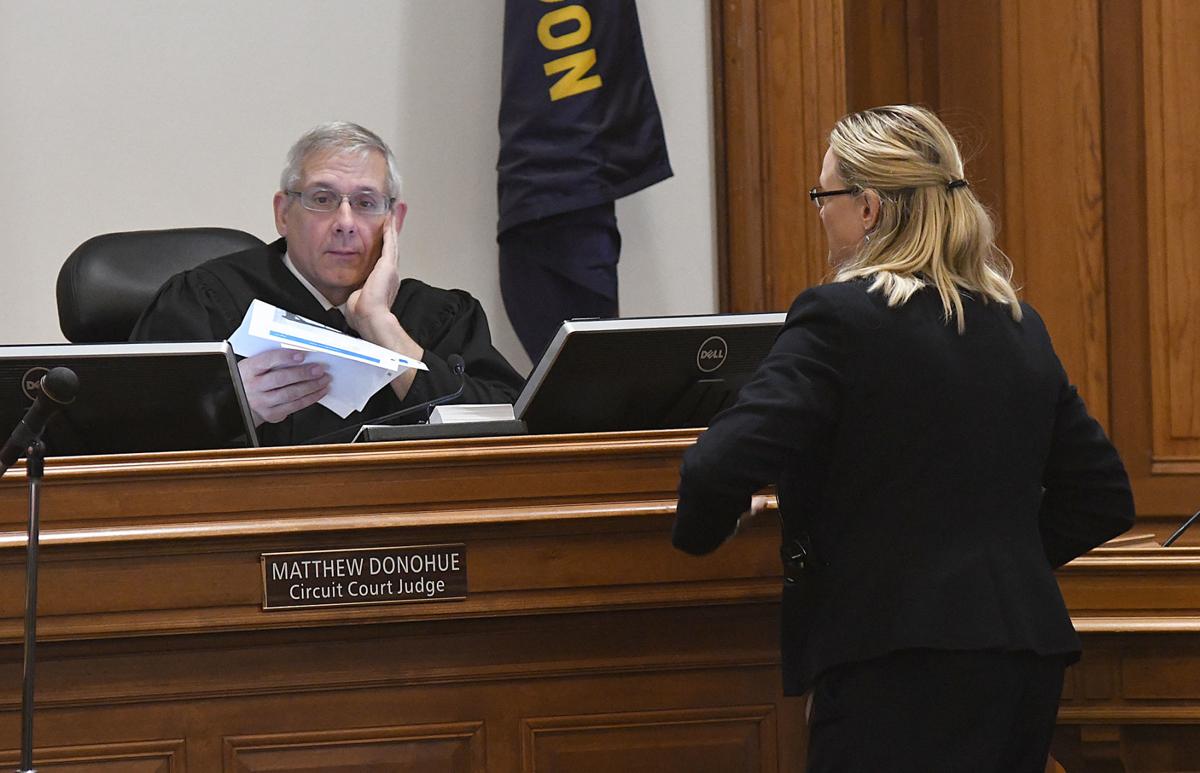 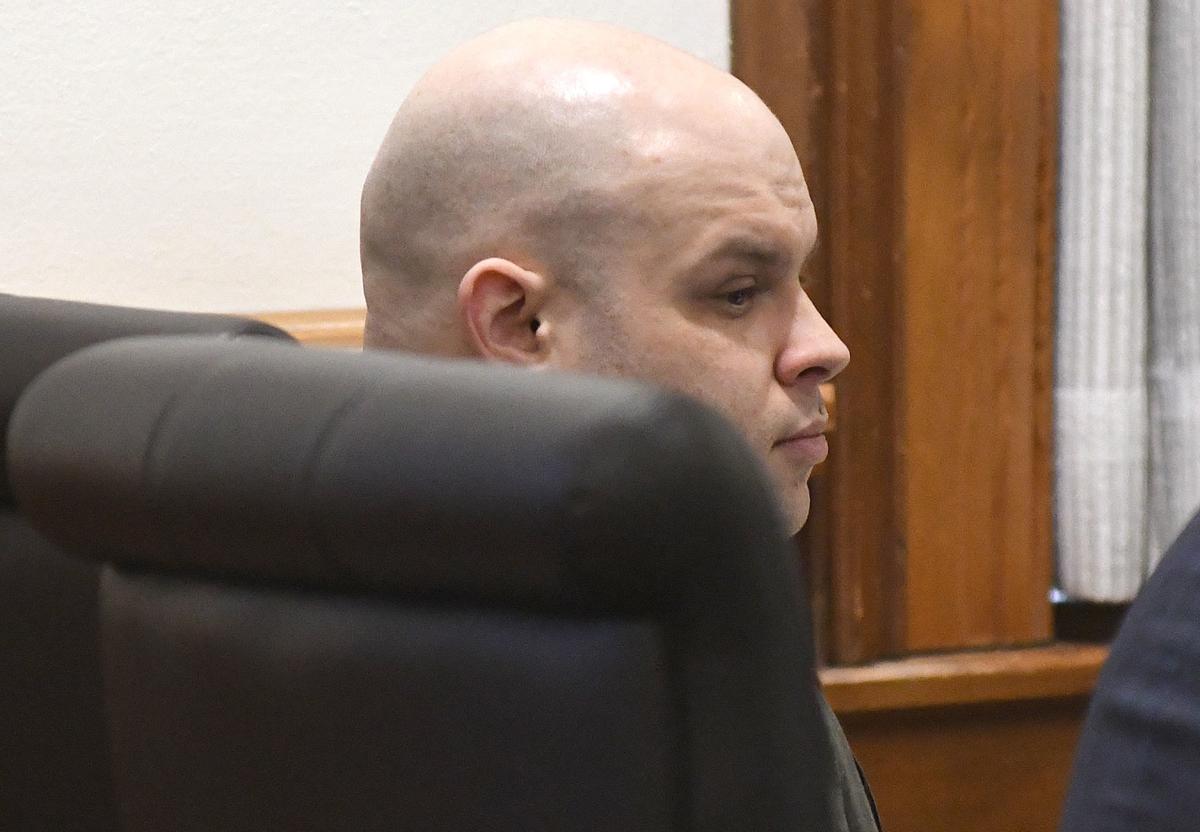 Defendant William Hargrove listens to testimony during the first days of his trial.

The “other woman” in the William Hargrove murder trial took the stand on Thursday, mapping out the complex tangle of emotional ties she says bound her to the defendant and the victim.

Michelle Chavez, 37, testified for nearly six hours in Benton County Circuit Court as a witness for the prosecution.

Hargrove, 29, is charged with murder and other crimes in the killing of Anna Repkina, a 27-year-old Russian woman who was found shot to death on a lonely logging road outside Alsea on April 17, 2017.

Prosecutors allege Hargrove was romantically involved with both women and that he murdered Repkina after Chavez told him he needed to get rid of her.

Defense attorney Mike Flinn insists his client is innocent. In his opening arguments on Monday, Flinn told the 12-person jury it was Chavez, not Hargrove, who fired the murder weapon, then threatened him with her family connections to an outlaw motorcycle gang to scare him into keeping silent.

In Judge Matthew Donohue’s courtroom on Thursday, Senior Deputy District Attorney Amie Matusko walked Chavez through a protracted explanation of her relationship with Hargrove, frequently referencing a thick binder containing transcripts of more than 13,000 text messages the two had exchanged.

From the witness stand, Chavez testified she was trapped in a loveless marriage with an Oregon State University instructor and — with her husband’s acquiescence — began having affairs with other men to fill the emotional and physical void in her life.

“I love you,” she recalled telling him. “But if you can’t give this to me, I’ll have to go find it somewhere else.”

Chavez said she met Hargrove when he was working at the Peacock Bar & Grill in downtown Corvallis and she was working nights as a cab driver.

The two became friends and then lovers, she testified, with an “open relationship” that allowed them to have sex with other people while remaining emotionally committed to each other.

When Hargrove needed a place to live, Chavez said, she let him move into a spare room in the Albany house she shared with her husband, where he paid rent “sporadically.” Chavez testified she sometimes helped him pay his bills, gave him $500 toward the purchase of a used car and co-signed a loan for another.

She said the two sometimes had sex at the Albany house, but more often, to spare her husband’s feelings, they went to motels “that I paid for.” Under questioning from Matusko, Chavez explained that she was sexually subservient to Hargrove, calling him “master” or “sir” in the bedroom, while he called her “Mishka.”

Then, in December 2016, Anna Repkina entered the picture.

Hargrove said he had met Repkina in Russia and that she was coming to the States for a week or so over Christmas, Chavez testified.

The prosecution claims Hargrove had met Repkina online and lured her from Moscow to Oregon with a promise of marriage, but Chavez testified Thursday she knew nothing of any wedding plans until much later.

Rather, Chavez said on the stand, Hargrove told her Repkina would be an “addition” to their relationship. Then he asked if she could stay at the Albany house during her Christmas visit, and Chavez agreed.

According to Chavez, the two stayed in Hargrove’s room throughout the visit, and she only saw them once, when she and her husband bumped into them unexpectedly.

“He introduced her as Anna. She shook my hand, she shook my husband’s hand,” Chavez testified. “That was the only time I ever laid eyes on her.”

Chavez said she and Hargrove talked about including Repkina in their relationship. At one point, she testified, they decided the three of them would move in together, along with Chavez’s two young children, in a Philomath apartment that Chavez’s sister and mother were moving out of.

But those plans would eventually come apart.

Shortly before Christmas, Chavez said, she “got nosy” and checked the messages on Hargrove’s phone — including one to Repkina saying he wanted to marry her.

When she confronted Hargrove, Chavez testified, “He said he didn’t mean it” but that it was too late to call off the holiday visit.

After Repkina left, Chavez said, she and Hargrove resumed their sexual relationship. But then she found another message on Hargrove’s phone saying Repkina was coming back in March, and the recriminations began again.

This time, Chavez said Repkina couldn’t stay with them in Albany. According to prosecutors, at this point Hargrove rented an apartment with Repkina on Garfield Avenue in Corvallis and starting splitting his time between the two residences and his two lovers.

Under Matusko’s questioning, Chavez acknowledged that she was jealous of Repkina and angry at Hargrove. She accused him of lying and demanded repeated assurances of his emotional commitment to her.

For his part, Chavez said, Hargrove started pressuring her to keep her promise to leave her husband, but she wasn’t ready to do that yet. To prove her sincerity, she said, she gave Hargrove the wedding ring her husband had given her.

By this time she had become Facebook friends with Repkina, Chavez testified, and learned that Hargrove had given the ring to her rival. Again, Chavez said, she was furious with Hargrove, and again he told her, “I didn’t mean it.”

Prosecutors claim Hargrove went so far as to take Repkina to the Oregon coast for a wedding ceremony only to call it off after they arrived, saying the officiant had canceled at the last minute due to illness.

But according to Chavez, “he had made it apparent to me that she wasn’t a good fit and that it wasn’t going to work out.”

She said she had decided to leave her husband by April 19 and that she and Hargrove still planned to move into the Philomath apartment on that date, but Repkina was no longer part of the arrangement.

But as the date grew closer, Chavez said, Repkina still hadn’t gone back to Russia. When she pressed Hargrove about it, she said, he lied or made excuses, while continuing to push her about leaving her husband.

Still, he kept promising to break things off with Repkina. When she gave him yet another “choose me or her” ultimatum in mid-April, Chavez testified, he replied with a text saying “I will have this solved permanently” by the 19th.

Things came to a head on April 16, Easter Sunday. According to Chavez, Hargrove had told her that Repkina was leaving Saturday and that he would pack up his things and be at the Albany house by midnight — but he never showed up. When Chavez drove by the Garfield house early Sunday morning after wrapping up her cab-driving shift, she testified, his car was still parked outside and she assumed he was inside with Repkina.

Heartbroken, she went to her sister’s house for a holiday meal with the whole family, Chavez testified, and began drinking heavily. But that afternoon, she said, she got a call from Hargrove, who said he was in Alsea and had run his car off the road after nearly hitting a deer.

She said he sounded shaky, and when he said he needed help changing a flat tire, she agreed to drive out there and meet him — in part, she testified, because “I wanted to yell at him.”

In Alsea, Chavez said, they had an argument and went for a drive, then had sex in his car on a secluded stretch of road.

By that time, prosecutors contend, Anna Repkina was lying dead on a similar stretch of road a few short miles away.

Near the end of Thursday’s testimony, Matusko asked Chavez several questions seemingly designed to head off the defense’s contention that Chavez is the real killer.

Had she ever killed anybody? Did she kill ever threaten to kill Repkina? Was she at the scene of the crime the day Repkina was killed? Had she handled the shotgun used in the killing? Did her father belong to an outlaw biker gang, and had she ever used that information to threaten Hargrove?

Chavez answered “No” to all those questions.

The trial is set to resume Friday morning, when Chavez is expected to wrap up her testimony and the defense will have a chance to cross-examine her on the witness stand.

Michelle Chavez testified for nearly six hours Thursday as a witness for the prosecution.

Defendant William Hargrove listens to testimony during the first days of his trial.