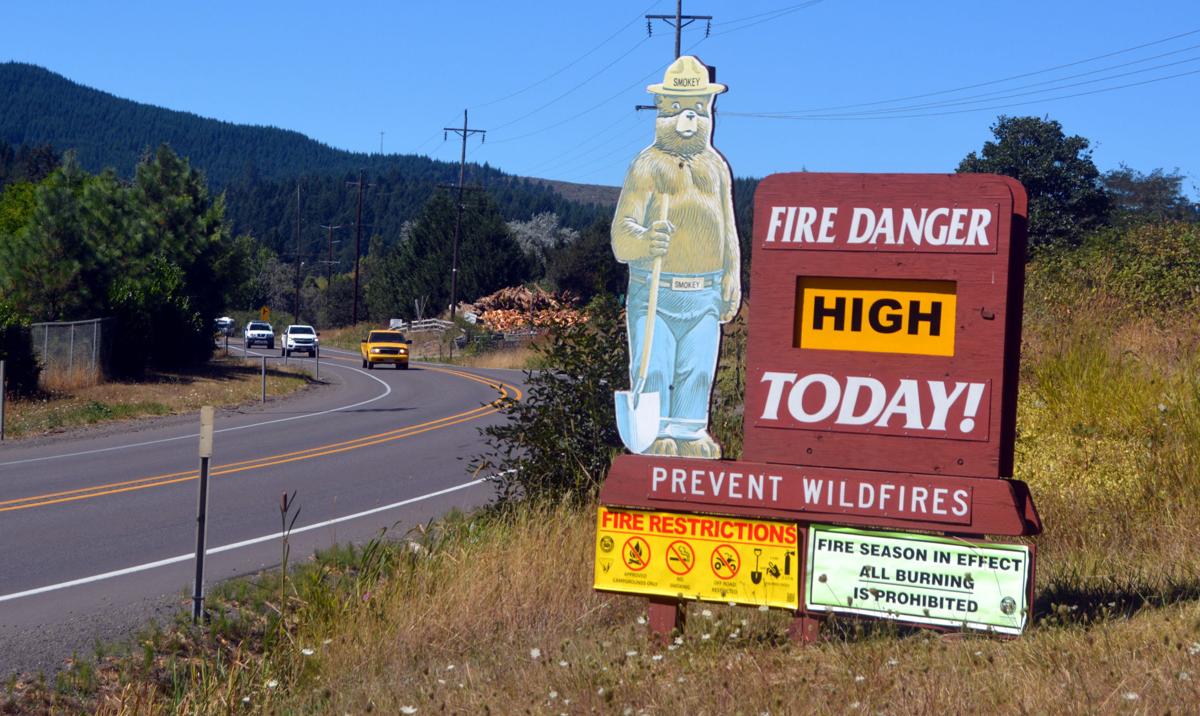 A fire danger level sign shows "high" alongside Highway 20 and near Marys River Estates Road near Philomath in this photo from Friday. 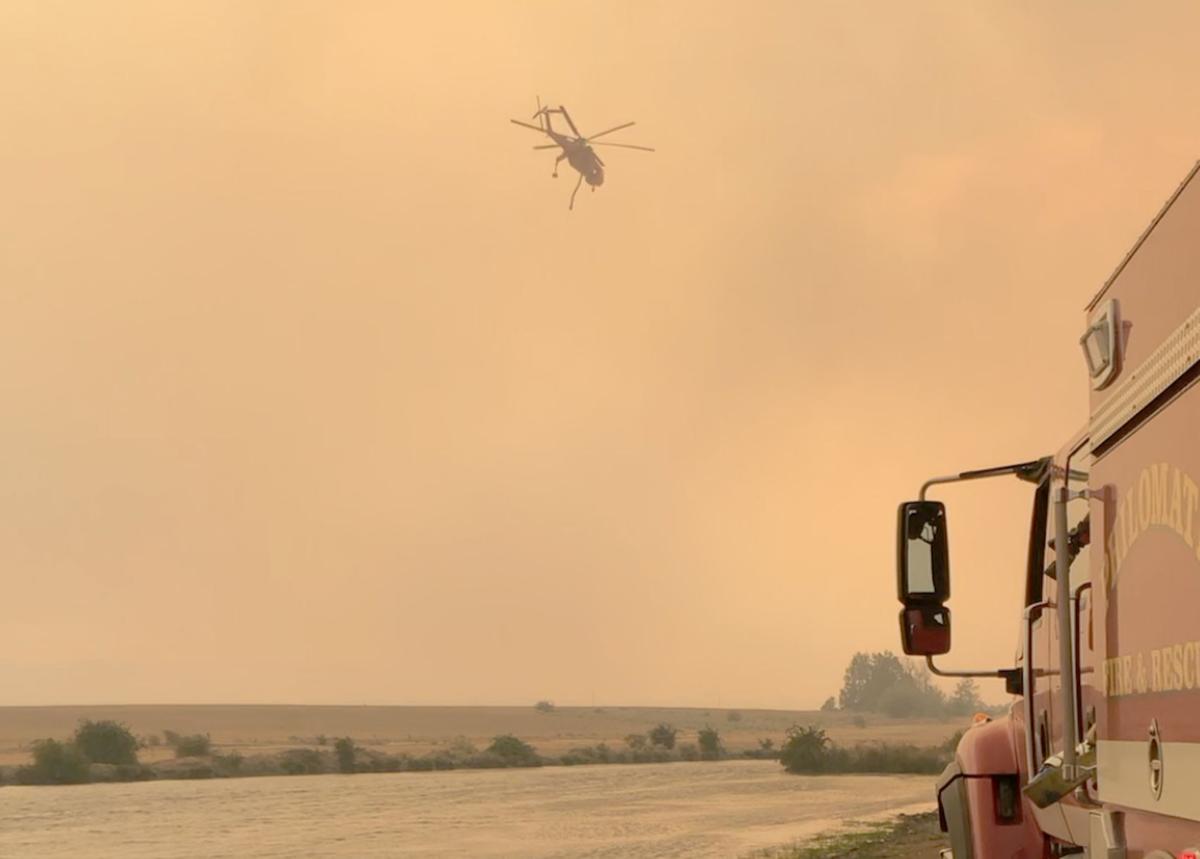 Philomath Fire & Rescue personnel snap a photo of a helicopter passing overhead in a hazy sky while working at the White River fire.

The Philomath winds swept in Thursday evening to provide relief. For the third straight day, the region baked during the daytime hours — 93 on Tuesday, 96 on Wednesday, 98 on Thursday.

Consider this interesting number: Close to suppertime late Thursday afternoon, the thermometer showed 98 degrees but by the following morning as folks were getting ready for the day, the temperature had dropped 45 degrees all the way down to 53.

Despite the brief reprieve, the forecast shows a return to the 90s in the coming days — all sunny with no chance of rain. And with no precipitation, video of devastating fires on the evening news and a lot of forest and grasslands in the immediate vicinity, it makes one wonder if the conditions are right for a fire to ignite in this area.

Philomath Fire & Rescue Chief Tom Miller said local firefighters are doing everything they can to be prepared. Red flag warnings have been issued for the region in recent days.

However, Philomath may be sitting in a better situation than say, the Sweet Home area, where a fire broke out a few days ago near the Green Peter Reservoir, Miller said. According to the Oregon Department of Forestry, the fire danger here as of Wednesday was “high.” There is an “extreme” category if conditions get worse.

“What’s happening is the moisture levels are coming up at night still because there’s still water in the ground,” Miller explained. “That’s the real reason why we’re not at ‘extreme.’ We call that recovery.”

Areas that do not benefit from those conditions could be more susceptible to a fire.

“Like Green Peter and these other fires that are burning in the lower Cascades here, they’re not getting that and that’s why they’re continuing to burn,” Miller said, “whereas ours in the evening with that moisture coming up, it tends to slow down and we can jump on it and get it out.”

The Green Peter fire, by the way, was contained by Wednesday at 18 acres.

But overall, wildfires have become a normal occurrence every summer in recent years — especially with the images that come out of California. Oregon has routinely sent firefighters to its neighbors to the south to help with the fight.

“Southern Oregon and Eastern Oregon tend to be more of the hot spots,” Miller said when asked about this state. “We were talking about the recovery — well, they don’t get the moistures up at night and so that’s why it continues to burn over there. We have the coastal influence and the river running through the middle of our valley and all of the farmlands and the planting and all that stuff continues to be watered.”

Miller said Oregon has an exceptional system for managing its forests, which could be a big reason why fires in California seen to be more devastating.

“I think what we do a lot better in Oregon is we manage our forests better,” Miller said. “I attribute a lot of that to the private foresters that cut down the trees and raise the trees and ODF.”

ODF annually receives grants to perform wildfire mitigation projects in areas around the state. The Wren area is an example where such efforts have been completed in recent years. Soap Creek up near Adair Village is another recent project.

One of the primary tasks in those projects is to eliminate the “ladder fuels,” which includes things like underbrush that could help a fire take off.

“The intent is we don’t want it to go to grass and push us to trees and then they become tree fires,” Miller said. “We can’t do anything with tree fires when we’re on the ground.”

It’s an important consideration for those who want to help protect their property.

“Watch out for the ladder fuels, those bushes that are against your house and on your property,” Miller said. “That’s the stuff that actually makes a difference between a grass fire and a raging forest fire.”

Basically, folks just need to make sure they don’t have things up against their homes that can burn — firewood, leaves, pine needles.

Miller offered this example. When they’re helping out on a major fire, say one of those down in California like they have in past years, one of the first things they do to try to protect property is “prep a house.”

“We clean out the gutters, we blow off the roofs, we make sure the underside is covered by plywood, pieces of metal, whatever we can, to make sure the embers don’t get under the house,” Miller said. “What happens is the leaves and the pine needles, they can ignite under there and if we can’t get in there for an hour, then the house is fully involved by the time we get back in there to check it.”

There are also situations when there’s no time with a fast-moving fire on the way and that prep work can’t be finished.

“Sometimes we’re just trying to get people out of the way or we do as much as we can and then get the heck out of Dodge and let the fire come through and then we come in after,” he said.

Lightning has been the primary cause of fires this summer.

“Most people don’t know this, but we had quite a few that went up in this area, too, or at least in Eastern Oregon up through Bend, Warm Springs, those areas, that were ignited by lightning,” Miller said.

“What’s interesting about the lightning fires is when the lightning strikes, we don’t even know it’s going to be a fire for a couple of days, and then all of a sudden you have a fire up there,” he added. “It might’ve hit a stump or a tree and it evolves into a wildland fire.”

Philomath Fire & Rescue does its best to offer education to the public on how to keep their lives and property safe through various programs. For example, communities such as Wren and Pioneer Village have been involved in the Firewise program, which ODF and Philomath partner on to provide home and property assessments.

Keep Oregon Green, a fire-prevention organization, offers the following tips to stay safe while in the outdoors:

• Operate ATVs and other motorized vehicles only on established roads.

• Check your vehicle for dragging tow chains that can send sparks into roadside vegetation.

• Don’t park or idle on dry grass or brush — the hot exhaust system can set it smoldering in seconds.

• Check current fire restrictions for the area before building a campfire. Portable cooking stoves using liquefied or bottled fuels are allowed at any time of year. Or simplify your life by bringing prepared foods instead of trying to cook over a smoky fire.

• Smoke only in an enclosed vehicle. Properly dispose of cigarette butts.

A fire danger level sign shows "high" alongside Highway 20 and near Marys River Estates Road near Philomath in this photo from Friday.

Philomath Fire & Rescue personnel snap a photo of a helicopter passing overhead in a hazy sky while working at the White River fire.