Scott Lepman, seated at the table on the left with his engineer Brian Vandetta, speaks to the City Council during an Oct. 15 public hearing. 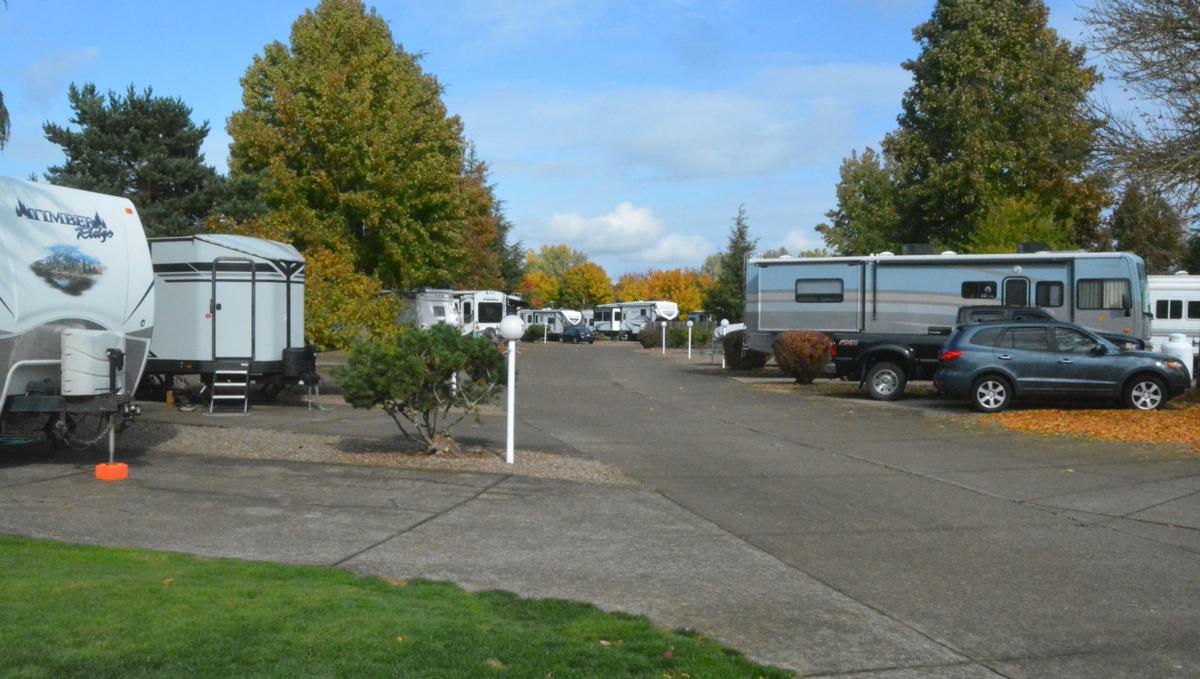 Scott Lepman, who is proposing an RV park on a former mill property in Philomath, owns the Blue Ox in Albany.

A public hearing on a proposed development that includes a 175-space RV park, industrial flex space and storage facilities ran into the late night hours last Tuesday at Philomath City Hall and when the mayor ended the meeting with the sound of his gavel, no decision had been made.

Four hours into the hearing with the clock past 11 p.m., the council decided to keep the written record open until Oct. 22 and then review testimony and make a decision at its Nov. 12 regular meeting.

The Philomath Planning Commission at an Aug. 26 meeting denied on a 3-2 vote a master plan overlay for the proposed development by Scott Lepman. The commission based its findings for denial on the development not meeting goals as outlined in the city’s comprehensive plan — specifically for not providing sufficient jobs as part of an industrial-zoned project and because the large scope of the RV park created questions about what could be interpreted as substandard housing.

Lepman appealed to the City Council and he had his full development team on hand for the hearing. The meeting opened with city attorney Jim Brewer providing various rules that should be followed in a quasi-judicial land-use hearing.

After the hearing opened, city councilors shared 27 minutes of declarations that covered everything from looking at certain websites to listening to Planning Commission meeting audio to driving through various RV parks, including Lepman’s Blue Ox in Albany.

Pat Depa, city planner, provided a 15-minute staff report that ended with a statement that he recommends approval of the master plan overlay with conditions.

Joel Kalberer, an attorney with Weatherford Thompson in Albany who predominantly works on real estate and land-use cases, basically told the council that the decision should only come down to the criteria.

“You have to put on a hat of a judge in a way and as a judge, you are given a set of criteria in which to evaluate applications,” Kalberer said. “As you heard from members of the public, some public members like some applications over others — sometimes it’s a beauty contest to them. But for you, it’s not; you have definite criteria contained in your development code and contained in your comp plan.”

Lepman addressed the lack of sufficient employment that the Planning Commission had cited in its denial.

“We’re providing 43 jobs — it’s not clear in your comprehensive plan or development code that you have to meet any standard for the number of jobs,” Lepman said.

“We are making significant investment in amenities to create a vacation resort,” Lepman said. “We are not developing a trailer park; we are developing a resort that will operate like a hotel with more amenities than any other lodging facility in Benton County.”

Kalberer said the substandard housing shouldn’t even be at issue because of the property’s industrial zoning.

Issues with the wetlands, including native plants and wildlife such as the Nelson’s checkermallow and as a migration stop for the monarch butterfly, was among the concerns brought up during the evening. Among those speaking about the wetlands was Cindy Mitchell, wife of the late Jeff Mitchell, who taught at Philomath High for years and brought hundreds of students to the site.

“As we choose the identity of what Philomath is going to become, are we going to become an RV town with all of the traffic backed up or are we going to think a little bit larger that?” Mitchell, a former Habitat for Humanity executive director, asked councilors. “Let’s keep our hearts and heads open. ... I’m so reminded of ‘you don’t know what you’ve got until it’s gone.’ Let’s not pave paradise and put in a parking lot.”

Water has always been an issue during any proposed development discussions. Lepman said the storage facility will use minimal water and the industrial flex space’s water demands will depend upon the type of occupant. And the RV park, he said, will use city water for domestic uses only.

“The city of Philomath Public Works Department has confirmed that the city has sufficient water for our proposed uses,” Lepman said in written comments to the council. “There are existing wells on the property that were previously used for fire protection for the wood products mill. We will be using these wells for irrigation. This will lessen the demand for public water.”

The evening had started with a capacity crowd in the City Hall conference room but thinned out as the hours wore on. The meeting had gone on past 2-1/2 hours when the public had a chance to voice their views. Mayor Eric Niemann put a limit of 3 minutes on each speaker.

Ten people spoke as proponents of the project — five of those all at once as part of the Blue Ox RV Park management team. Seventeen people testified in opposition to the project. None testified as a neutral party.

Matthew Conser, who brought the Oak Springs Apartments to Philomath and represented David Lin in the sale of a portion of the property to Lepman, said it only makes sense to bring in the development.

“Once the mill left, there had been a lot of hope for various users to take on that site ... but none have materialized,” Conser said. “The Benton jail proposal was very close to a real plan, but frankly, who really wants that in your town? Well, Corvallis would’ve liked to have seen that in your town. As a neighbor, we certainly prefer these uses to a jail.”

Other proponents testifying included Christina Rehklau, executive director of Visit Corvallis, who said there is demand for an RV park. Becca Barnhart, of the Willamette Valley Visitor Association, also spoke in favor of it.

“As the tourism arm for the Benton County area, we often receive calls to our office from people who are looking for a place for RVs, so that’s something that I would love to see,” Rehklau said. “A lot of traffic goes from I-5 to the Oregon Coast and you guys are positioned very well as Philomath to take advantage of it.”

Ken Pellett, a builder and developer who has lived in Philomath for 56 years, believes in the proposal’s end result at the former Hobin Mill site.

“I had friends that worked at that mill and to me, it’s just a picture of something that died and I think it would be turned into something beautiful and I can’t imagine why anyone would have a problem with that,” Pellett said.

Peggy Yoder, who sits on the Planning Commission, testified as an opponent of the Lepman project.

“The project did not comply with the applicable development code criteria pertaining to the city’s comprehensive plan,” Yoder said. “If our comprehensive plan doesn’t match or follow what the development code says or approves, shame on us. ... I am concerned with any precedent-setting about allowing so many large spaces filling up our industrial area with trailers and RVs and such right now.”

Yoder asked councilors to back up the Planning Commission’s vote.

“The Planning Commission spent many hours on discussions, the developer testimonies, public comment and personal at-home review of the pages and pages and pages of material that was provided,” Yoder said. “And I just hope that the decision is not made by either drive-bys or comments made by developers about how this might work for the city of Philomath. I do ask that the city councilors abide by the decision made by the Planning Commission.”

John Booker, a 20-year resident of Philomath, voiced concern over such land going to an RV park with the hope that more businesses will want to come to Philomath. He also urged the City Council to look at the implementation of a tourism tax to recoup investments.

Booker said the comprehensive plan needs a serious review to figure out what’s best for citizens.

“I think if we move too fast, we’re going to anger a lot of people out there, me being one of them,” Booker said. “I moved to Philomath because it was a small town and it was nice and I look forward to having it stay that way.”

Catherine Biscoe during her testimony asked for the record to be held open, a request that others who followed her also made.

Sandy Heath believes the development applications do not qualify under the current comprehensive plan.

“I believe there is sufficient evidence here to rule in the community’s favor and not to reverse the decision made by the Planning Commission,” Heath said.

Near the end of the meeting, a bit of confusion seemed to arise about procedure involving the opportunity for councilors to ask further questions of the applicant at the next meeting. However, Brewer said that would equate to the council asking for the public hearing to be reopened.

“Regardless of the decision that the council makes, I think that there’s a pretty good possibility that it’ll get appealed and it seems to me like having a deliberation that’s really a public hearing but it’s not set up with some of those safeguards and not announced that way, seems like a bad idea to me,” Brewer said.

A single public hearing was held out of two appeals that City Hall received. Biscoe, Heath, Lawrence Johnson and Jeff Lamb filed an appeal involving the Planning Commission’s approval of a conditional use to allow for observation decks and an interior trail to encroach into the Newton Creek Riparian Corridor and for a 0.3% variance to the maximum allowed lot coverage.

The City Council’s next meeting is scheduled for Tuesday, Nov. 12 — a day later than usual because of Veterans Day.

Following is a list of votes taken by the Philomath City Council at its Oct. 15 meeting:

The Philomath Planning Commission approved updates to its Urban Growth Management Agreement with Benton County during a Jan. 21 meeting.

Scott Lepman, seated at the table on the left with his engineer Brian Vandetta, speaks to the City Council during an Oct. 15 public hearing.

Scott Lepman, who is proposing an RV park on a former mill property in Philomath, owns the Blue Ox in Albany.