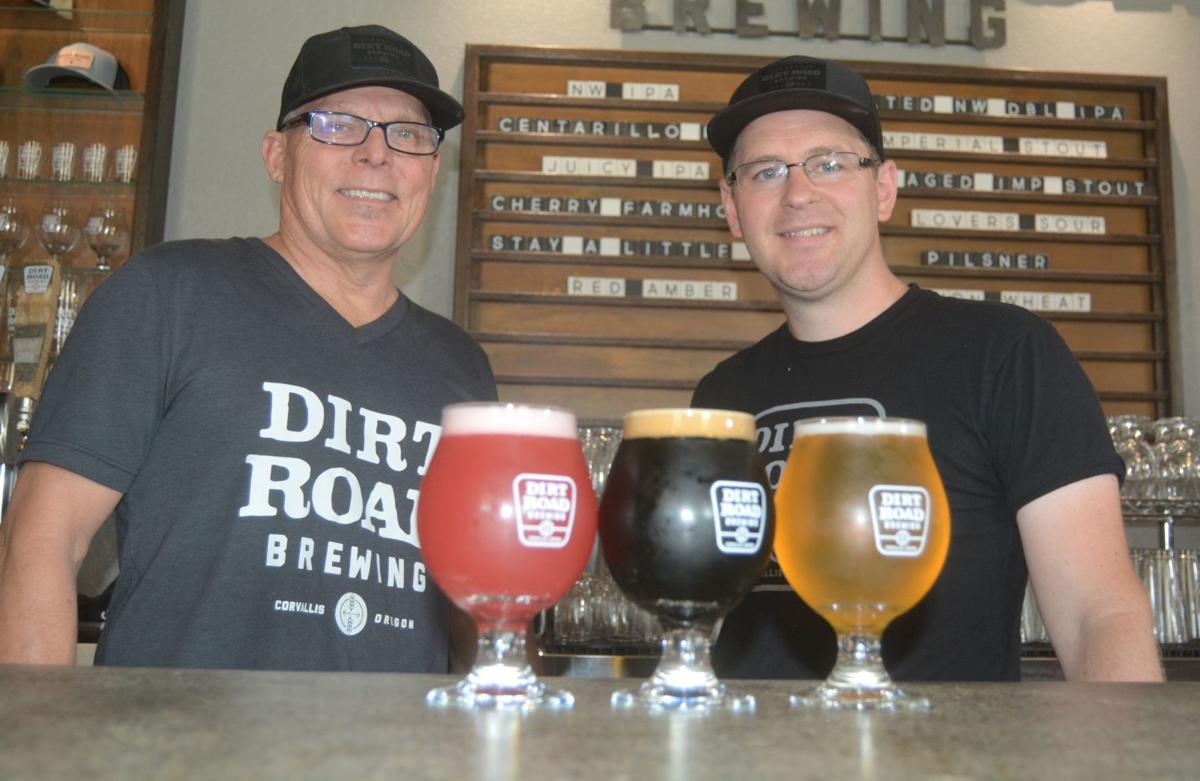 Chuck Cox, left, and Jon Campbell have teamed up to bring Dirt Road Brewing to Philomath. 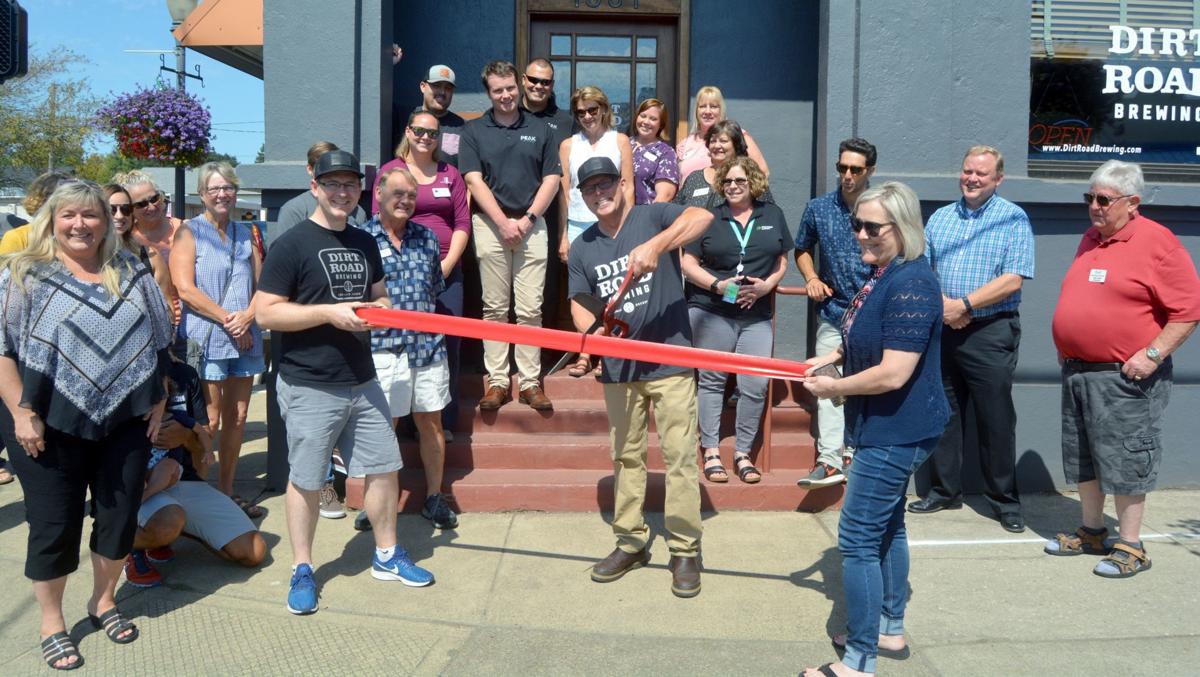 Dirt Road Brewing owner Chuck Cox does the honors of cutting the ribbon Wednesday during a Philomath Area Chamber of Commerce event welcoming the business to town.

The purchase of a home-brewing kit, a chance meeting at a triathlon club get-together and the timely availability of an old bank building all came together in the right way to give Philomath a new taproom.

Dirt Road Brewing opened a few weeks ago on the corner of Main and North 13th streets and celebrated with a ribbon-cutting ceremony this past Wednesday.

The brewery’s owner, 59-year-old Chuck Cox, had no experience with brewing beer until he stopped by a local business.

“I bought a home brew kit from Joel (Rea) downtown at Corvallis Brewing — that’s all I did,” Cox recalled. “I came home one day and told my wife, I’m brewing beer.”

That was just the beginning.

“I was doing that for probably about eight months or so, then I built a bigger brew system, a 20-gallon system, and that’s when I met Jon (Campbell),” Cox said.

Campbell had accompanied his wife, Beth, to a Corvallis Triathlon Club meeting. The two were soon involved in a conversation.

“We just started talking about beer and I showed him my system and we just started brewing beer,” Cox said. “He was a home brewer, too, but he actually knew how to brew, though, and I didn’t. He knew the science behind it.”

Campbell said their first batch together came along in early July 2017. Appropriate for a hot summer day, the brew was Dirt Road’s Lemon Wheat, which is among the dozen beers available at the new taproom.

The pair has a special connection with the Lemon Wheat.

“That was the first batch we had on the big system and the first beer we tapped here at the taproom because there’s a history behind that beer,” Campbell said. “It’s always the first thing we do at a new location. It’ll probably be the first beer that I brew at the new location when we move the production facility down there just to keep with the tradition.”

Campbell was referring to space that has been rented on South 10th and Main streets. Currently, the beer is brewed at Cox’s residence on Oak Creek Drive, located in Corvallis not far from the Benton County Fairgrounds. The transition to the Philomath site will begin soon, Cox said.

Philomath Area Chamber of Commerce members welcomed Dirt Road Brewing to the community with the Aug. 28 ribbon-cutting ceremony. A very well-attended event, it was the first time that many were able to get a look inside the historic bank building, which had previously been home to The Wine Vault.

A contractor by trade, Cox headed up the work and brought in an electrician and plumber to help along with good friends that contributed hours. His son, Corey Cox, did all of the wood work.

“Special thanks to Greg Bean, who did all the welding for me,” Cox said. “He helped me out immensely; we were putting tables together the day before we opened.”

Although doing work on a building that has such a long history in the community sounds like fun, it also can provide challenges.

“It’s like you can’t just go under the floor in the crawl space; everything's concrete and you have a flat roof, so it makes it a little challenging,” Cox said. “Just four concrete walls and it made it quite interesting but we did it.”

The historic bank vault remains in place with the original door intact. Cox said it’s used for storage and as an employee locker.

The opportunity to get into the historic building developed quickly.

“We were always in the hunt for a taproom,” Campbell said. “We couldn’t find a location and this building popped up and provided the means for a location.”

Charlie and Marcia Gilson had owned the building for 15 years as a wine-tasting venue and were getting ready to put it on the market. Cox discovered it after stopping by City Hall.

“Thanks to Chris Workman (city manager) — we walked down to his office one day and told him, ‘we need a place’ and he said, ‘let me introduce you to Charlie and Marcia' and we walked right up here,” Cox recalled. “We were just looking for a lease option on something and they said they’d be interested in selling it.”

“I just bought a brew system so my wife wasn’t going to let me buy a building,” Cox said. “Jon and his wife actually bought the building and Dirt Road leases it back. That’s how we ended up here.”

“We have room for 16 taps but 12 seems like a magic number right now,” Campbell said. “Hopefully we can fill those next four taps in the future as we continue to grow.”

Amanda Bloom joined Dirt Road Brewing as the kitchen manager and came up with a unique food item for the menu.

“The hand pies — they’re kinda the highlight of the menu right now,” Campbell said. “Then we have some snack items. She’s been doing about a special a day.”

Agencies work together to study crosswalk options in Philomath

Heading westbound on their way out of Philomath, motorists will often begin to accelerate along about Eighth Street.

Sitting in the front row of the Benton County Historical Museum’s Moreland Auditorium on the evening of Jan. 29, Jack Lehman listened intently…

Two people were hospitalized after a car vs. motorcycle collision near Wren on Feb. 9.

LINCOLN CITY — On the second weekend in August each summer, the Confederated Tribes of Siletz Indians congregate on Government Hill for the Ne…

CORVALLIS — Annabelle Jaramillo is calling it a career.

Philomath takes look at implementing a lodging tax on visitors

Philomath’s influx of visitors will increase in the near future with the construction of a new recreational vehicle park and as a result, the …

Chuck Cox, left, and Jon Campbell have teamed up to bring Dirt Road Brewing to Philomath.

Dirt Road Brewing owner Chuck Cox does the honors of cutting the ribbon Wednesday during a Philomath Area Chamber of Commerce event welcoming the business to town.