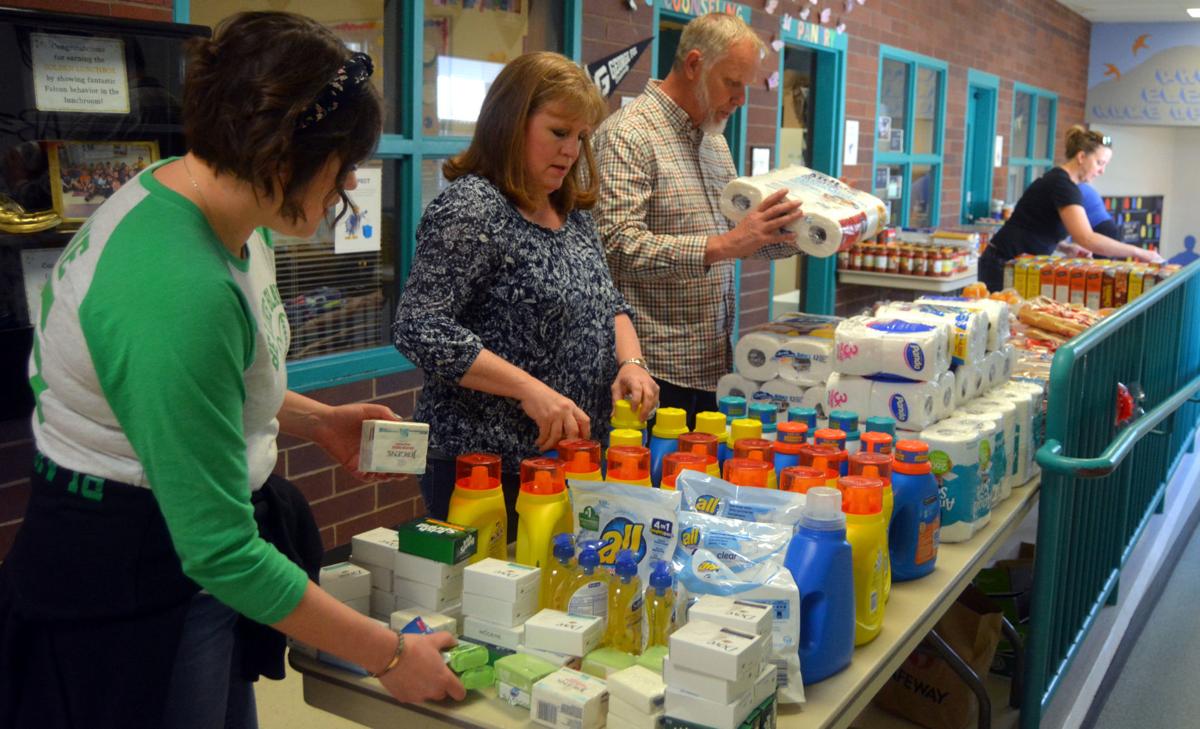 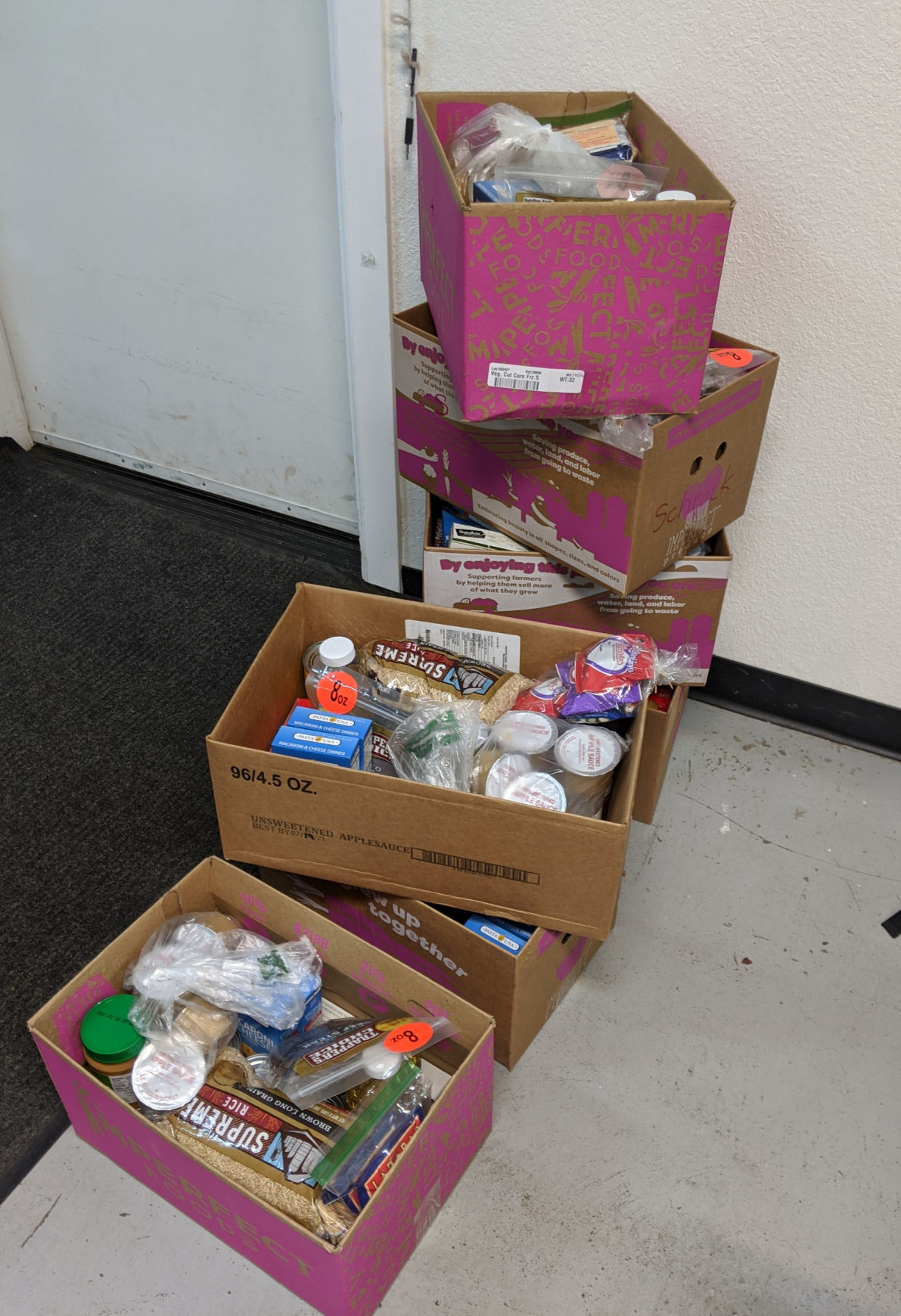 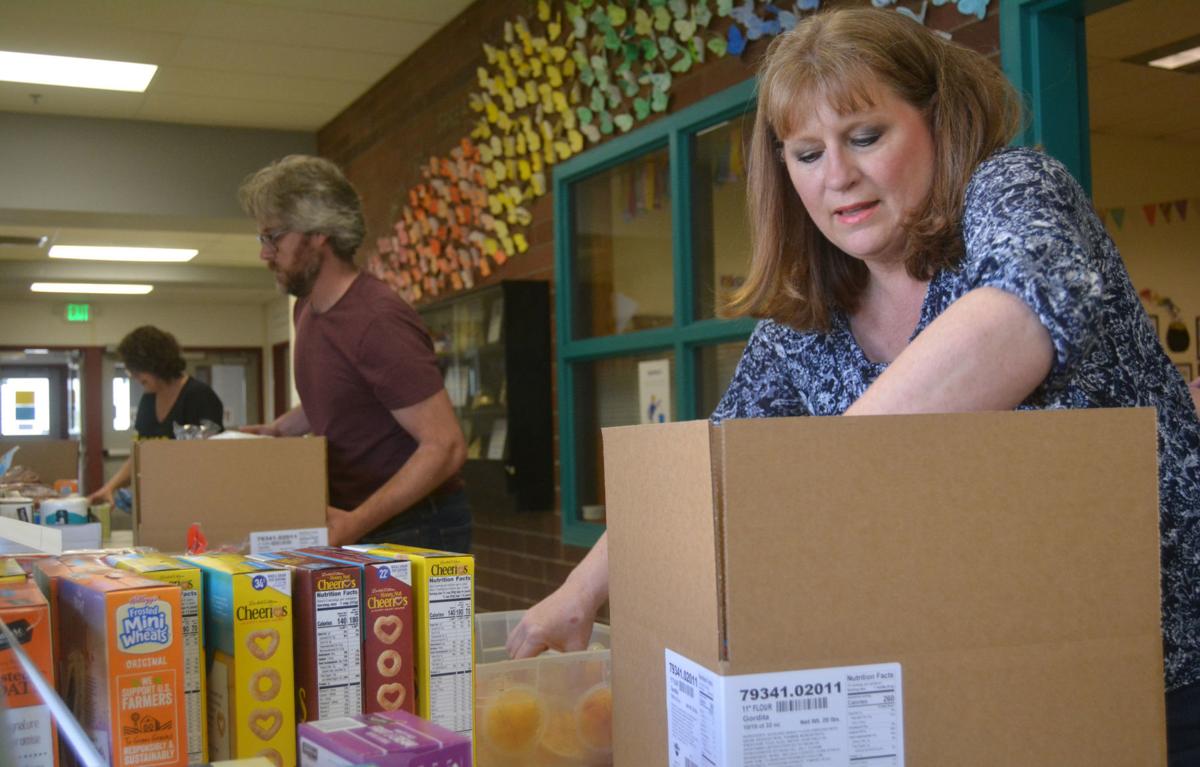 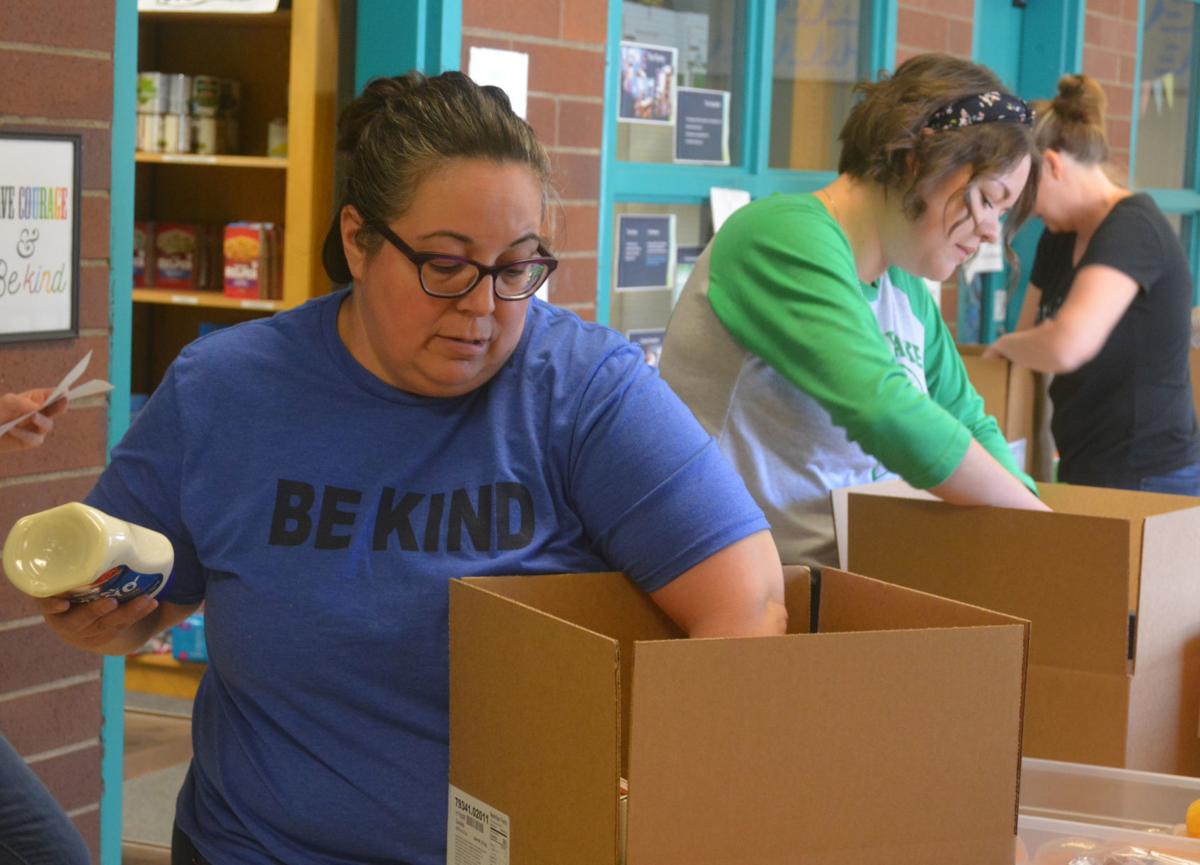 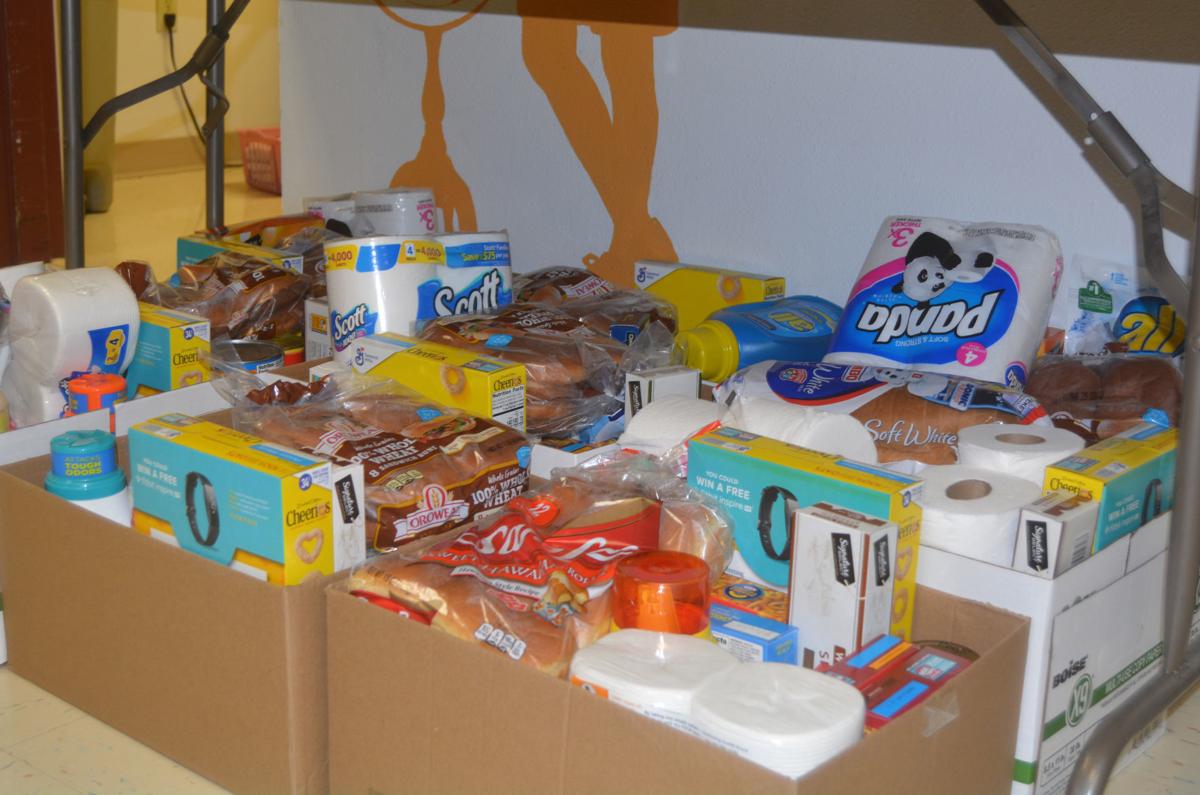 Boxes are filled with various food and household products.

In grocery stores over the past couple of weeks, anxious shoppers have emptied shelves to make sure they have food and other items to take care of themselves and their families amid the chaos of the coronavirus, a new respiratory illness that’s disrupted day-to-day life around the world.

But not everybody can just hop in the car, head to the store, fill a grocery cart and run a debit card to pay for it all. Families living within this reality often depend on food banks to keep the fridge and cupboard stocked and school programs to satisfy mid-day nutritional needs for their children. And then there are senior citizens, many forced to make ends meet on a limited source of income while maneuvering through uncertainties of the future amid this response to a pandemic.

Jill Williams, a Philomath Elementary School counselor who started the school district’s food pack program more than a year ago, has seen a lot of good in the community in recent days. It means a lot to those on the front lines trying to make sure the food doesn’t stop going to those who need it most.

“People, I think, are a little lost. I think they’re not completely sure which direction to go,” Williams said when asked about what she's seeing in the community. “I think people are all responding out of fear right now, even those of us that are trying to be calm and look like we’ve got it together, we’re responding out of fear about what’s going to happen next and what we’re supposed to do.”

Then somebody writes a check for $2,500. And then another check for $2,500. Even the $10 handed to a volunteer during a grocery shopping trip represents a gesture that leads to a calming, deep breath in the midst of the craziness.

Jean Goul, who serves as the Philomath Community Services board president, was shopping at WinCo last week when she received a call from Williams. Gene Tools, a Philomath-based biotech company, was donating $2,500 to go toward food programs. It brought tears to her eyes.

“It was such a surprise,” Goul said. “Here I am, struggling while thinking, ‘Are we going to have enough food, will everybody be open, is everybody well, what’s going to happen, what’s closing?’ It was so uncertain. To have Jill call me and say this donation came in was wonderful.”

Initially, Goul believed it was $2,500 to be split between the school district’s food pack program and the Philomath Food Bank. Instead, each group was receiving $2,500.

School counselors and volunteers from The Refuge church filled boxes Wednesday with food and other items that were scheduled for distribution the following day. School office manager Molly Crocker went on a huge shopping trip just after classes first shut down and came back with her truck full of groceries.

While shopping at Safeway, someone approached Crocker about all of the items in her basket. After learning that the food was for school families as part of the program Williams had started, the woman handed over $10. Asked by Crocker if she would give her name, the woman responded “Nope” and walked away.

“That response is insane,” Williams said. “It’s not about any one of us or what we’re doing. It’s about the community.”

Since the school closed, the food pack team has been calling each family that had been receiving food and asked if they wanted to receive a food box and possibly other services. Everybody contacted responded “yes.”

The food pack program, which was expanded to Kings Valley, was sending home 80 bags per week, which Williams said involves around 35 families.

Each box included various food items such as spaghetti, sauces, chili, macaroni and cheese, rice, Hamburger Helper, soup, cereal, oatmeal, sandwich stuff and ground beef, thanks to a donation from Mount Angel Meat Co. Hygiene items were included as well, including an item that seemed to really be needed, laundry soap.

Prior to the public health emergency, the program had been financially stable enough to continue at least through the next school year. The group will need to re-evaluate, however, to see how far they can stretch the budget. Other sources of income, including a grant, go to the program. And entities such as the Corvallis Food Service have helped, including with fresh produce.

“We should be OK for a little while,” Williams said. “Right now, people are asking if they can donate food and other things and we’re saying yes, we’ll take anything” because we’re continuing to contact families.

The program believes it can afford to do a second round of food boxes.

“We certainly have the money in the food pack program account to do this at least a second time and the district is in full support of that,” Williams said. “In a couple of weeks, we might call families again and say, ‘OK, is there still a need?’”

The school district also is offering its “grab-and-go” meals, which are distributed to students ages 18 and under from noon-1 p.m. at Clemens Primary School. Similar to the program offered to children over the summer, the distribution includes both that day’s lunch and the following morning’s breakfast.

Philomath Community Services needed to change its method of distributing food with precautions in place because of the coronavirus. The food bank closed its shopping-style pantry to the public and instead is putting together boxes of food along with a bag of perishable items that can be picked up at the door.

Goul estimated that 20 families were served last Tuesday and around 18 on Thursday. The food bank offers monthly emergency boxes.

“We’re selecting the meat for them instead of giving them a choice and we have a very limited supply of bread,” Goul said. “It’s been kind of tough because we do like for people to have a choice of what they want. If we give out food, we can’t accept it back so we hope they’ll use it.”

Goul said Linn Benton Food Share is the primary source of products for the food bank.

“We do have some (food) donations from the community but they’re sporadic and sometimes they’re a little bit of this and a little bit of that, so it’s hard to distribute that equitably among the boxes of food,” Goul said, adding she’s been encouraging monetary donations instead because PCS can purchase more food per dollar through Linn Benton Food Share’s connections with Oregon Food Bank and the USDA.

“In fact, I just received a donation from the middle school and it was actually a drive for the food bank during the holidays and it was $675,” Goul said. “It was just a wonderful addition to our coffers.”

Other sources of money could be available through grants, including a sizable gift from Nike to the Oregon Food Bank. PCS plans to apply to that organization for an emergency grant.

Goul said she believes early numbers suggest that more people may be interested in the food boxes based on what she saw at the Tuesday and Thursday distributions.

“I saw a few people who weren’t already clients and they wanted to join in because they needed food,” she said. “People can sign up fairly easily right at the spot and get their box of food.”

The gleaners program launched its own prepacked box and bag system this past Saturday with deliveries to adoptee households. The program offers weekly food boxes to its participants during the public health emergency.

The gleaners have a more extensive sign-up process, although Goul said that based on information received from Susan James, Linn Benton Food Share gleaning and volunteer programs coordinator, they’ve curtailed their requirements at this time to ease the process. New members will receive food and follow-up on applications will be done as time and resources permit.

Lupe’s Community Garden plans to set regular hours for volunteers to help get exercise and do some gardening with planting to take place soon. There will be limits on numbers, however, and those on site will be spaced out. The organization is working on a plan on how it would work.

June’s Kids Kloset closed back on March 12 as PCS refocused its priorities to serve the community as part of the response. Goul said that if someone does have an urgent need — she mentioned diapers and baby wipes — they can make contact during the regular food bank hours.

The Philomath School District’s food pack program welcomes donations of food or cash. For those who would like to help, call the elementary school at 541-929-3253 (leave a message) or send an email to jill.williams@philomath.k12.or.us or jilliwilli@comcast.net.

Philomath Community Services welcomes monetary donations to help its programs, including the Philomath Food Bank and Philomath Community Gleaners. For information, go to the organization’s website at www.philomathcommunityservices.org/donation-page. PCS has a secure link to donate with a credit or debit card. Checks can be mailed to P.O. Box 1334, Philomath, OR 97370.

SALEM — Governor Kate Brown on Monday directed most Oregonians to stay home except for getting groceries, going to work or handling important …

Oregon reports 30 new COVID-19 cases, including another in Linn County

The state of Oregon is reporting 30 new COVID-19 cases as of Monday morning, and one of those is in Linn County.

Boxes are filled with various food and household products.