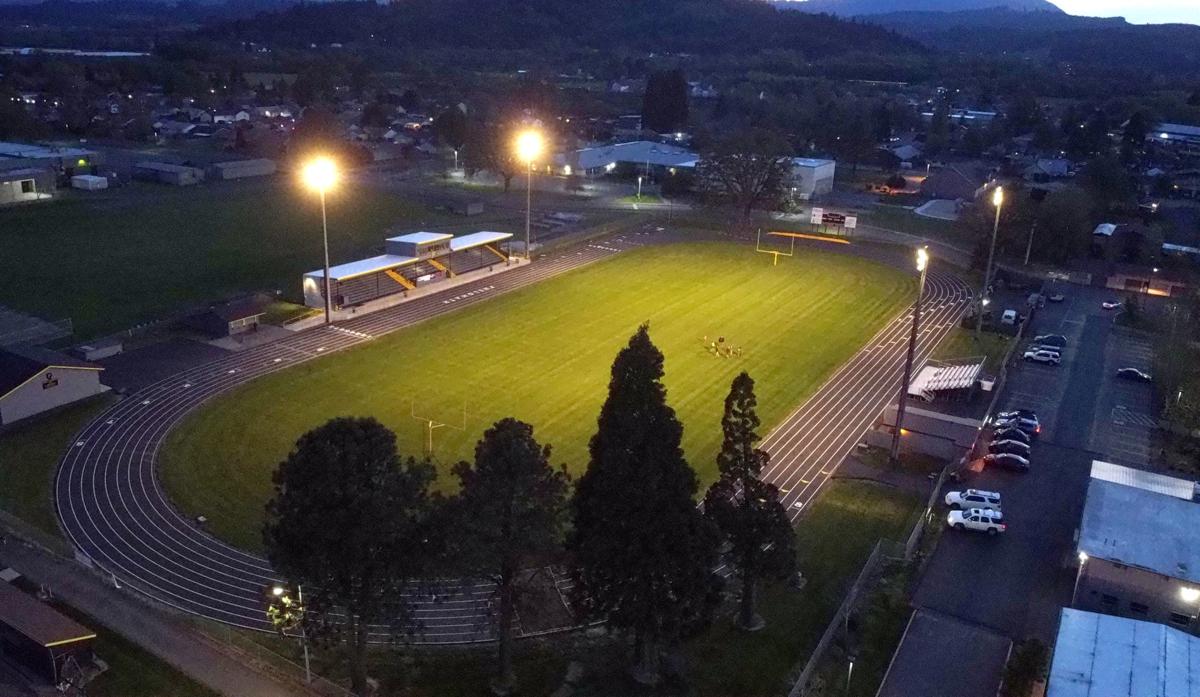 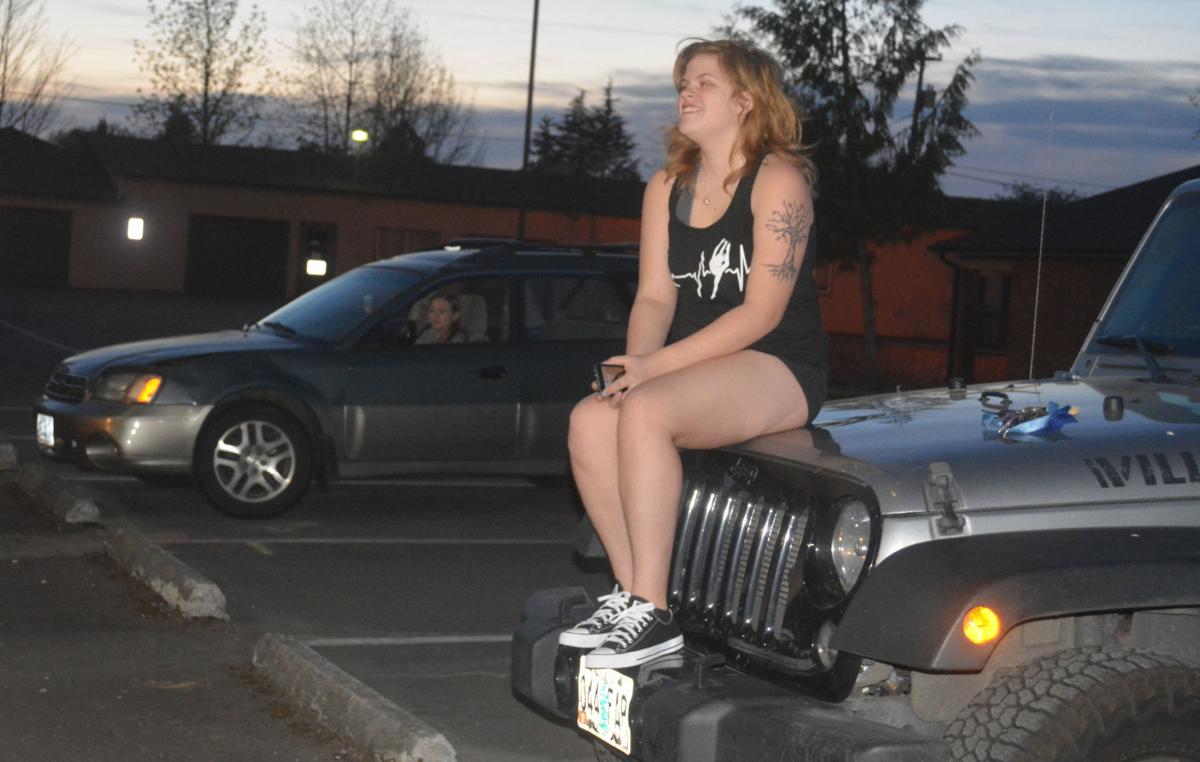 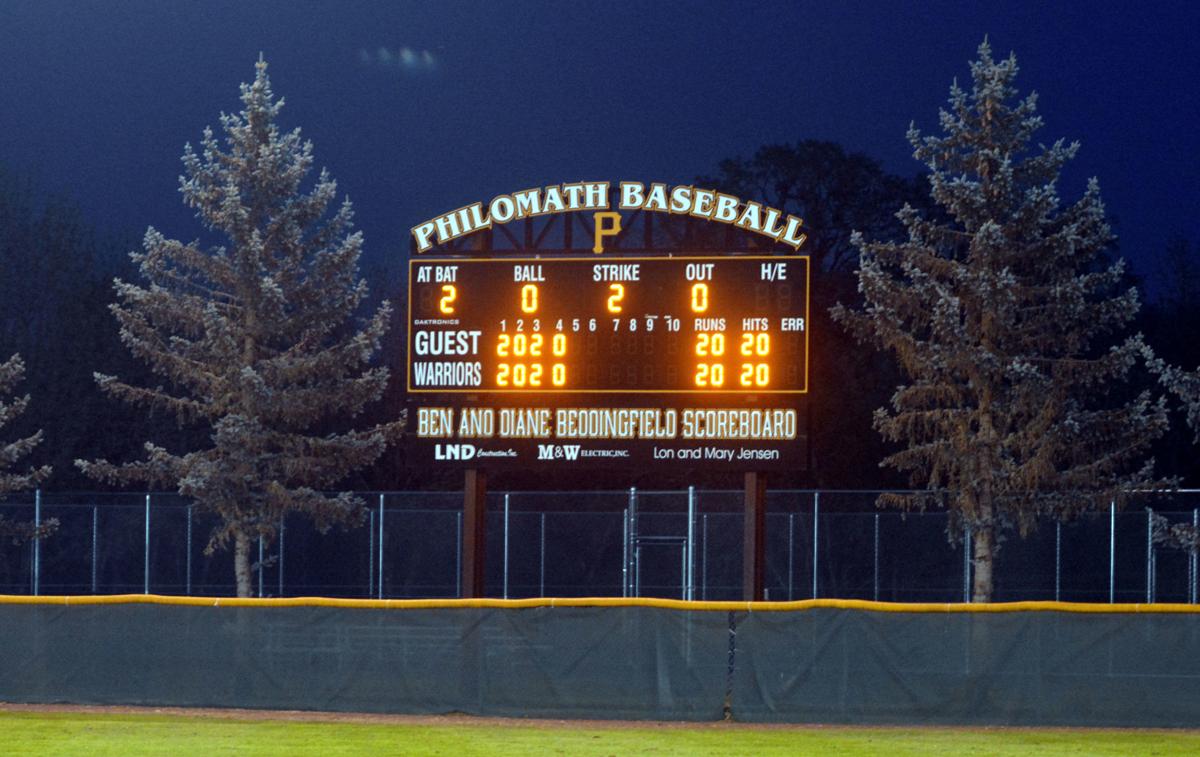 The baseball field's scoreboard Friday night illuminated five 2020s in honor of the five seniors that were part of the program this spring. 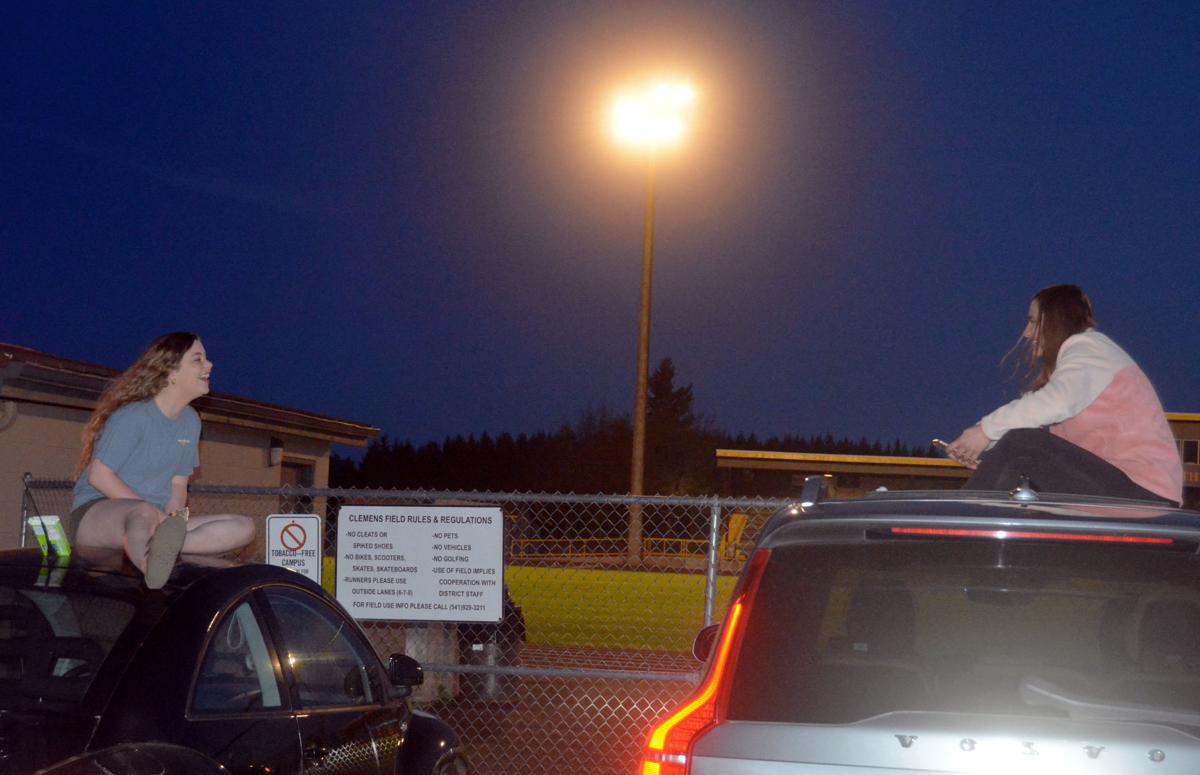 Alexis Van Vlack, left, and Emma Pankalla, both seniors, visit during the 20-minute period that the Clemens Field lights were on Friday night.

With the glow from the Clemens Field lights overhead, Philomath High School seniors Alexis Van Vlack and Emma Pankalla chatted with one another on a pleasant Friday night. Sitting on top of their cars. Beyond 6 feet apart.

“It’s cool that we can come out here and stay apart but still have something to come together for,” Van Vlack said a few minutes before the lights were illuminated over the football-track and field complex.

A handful of seniors turned out for the #BeTheLight movement, which Philomath first participated in on April 10. Several campuses across the state have jumped on board to turn on their stadium lights as a gesture to the seniors that have seen their last few months of their high school experience vanish.

“It’s a way to show that you support the kids, and specifically at the 20:20 military time, for the Class of 2020,” PHS Athletic Director Tony Matta said. “To show that you’re here for them and you’re thinking about them and hope they’re doing well.”

The lights at the PHS baseball field were also turned on, including the scoreboard that was all lit up with five “2020” references that corresponded to the number of seniors — four players and a student manager — in the program.

“I think it’s a good way to support the seniors since we don’t get to have our seasons,” said Tasha Varnado, a PHS athlete senior who is really missing her favorite sport. “Not having a senior softball season is killing me.”

The movement took hold in Oregon a few weeks ago after Madras Athletic Director Evan Brown sent out emails to his colleagues on the idea. Brown had read about how the movement had taken off in other states.

“We’ll do that every Friday through the end of the school year,” Matta said.

The lights remain on for 20 minutes — another reference to the Class of ‘20. Matta said some schools are leaving on their lights for the number of minutes that corresponds with the number of days that campuses have been closed.

“It may seem like a small thing to some community members but to us — I’ve played on this field and have been in the student section where a bunch of people have had their best memories,” senior Logan Hannigan-Downs said. “It’s Friday night lights; it’s the whole community coming together at one time.”

For the students who came together for the lights — and yes, social distancing was maintained — it was a chance to see friends. That’s the part of school that they seem to miss the most.

“(I miss) walking down the hallways and seeing everybody,” said Varnado, who was on hand for the lights for the second straight Friday. “It was an everyday thing and now it’s not.”

Said Hannigan-Downs, “We have a pretty close class and I think it’s hurting all of us to not see each other and smile at each other in the hallway each day.”

Van Vlack misses “a lot of small interactions that you don’t even think about” along with the bigger events that seniors enjoy, such as prom.

The PHS commencement, scheduled for June 6, may not occur as it has in the past with parents and friends packed into the stands to celebrate the graduates.

“All throughout high school, we’ve seen all of our older friends go through it and walk,” Hannigan-Downs said. “I don’t think the big thing for us is walking, but it’s after the fact when we get to see everyone and give hugs and take pictures. It’s really that social piece and coming together to celebrate this.”

Added Varnado, “A bunch of my family was going to come and it’s going to suck if we don’t actually get to celebrate with our class.”

Van Vlack is still hoping that an on-site graduation ceremony can occur.

“I hope they can still have one, even if it’s postponed — just to have it in person and have the experience,” Van Vlack said.

The Philomath Frolic & Rodeo’s annual fireworks show will light up the sky on Friday night. The rodeo grounds will open at 8:30 p.m. and t…

Following is a rundown of students that were recognized with awards during an online convocation that occurred this spring:

Public to be able to comment on streetscape themes

Philomath citizens and business owners will have an opportunity in the coming days to weigh in on the downtown streetscape design, a project t…

A number of Philomath restaurants, bars and wineries are trying to utilize their space to the fullest extent possible amid state-imposed reope…

The Oregon Health Authority reported 146 new confirmed and presumptive cases of COVID-19 on Monday, including two in Benton County, and two ad…

The baseball field's scoreboard Friday night illuminated five 2020s in honor of the five seniors that were part of the program this spring.

Alexis Van Vlack, left, and Emma Pankalla, both seniors, visit during the 20-minute period that the Clemens Field lights were on Friday night.