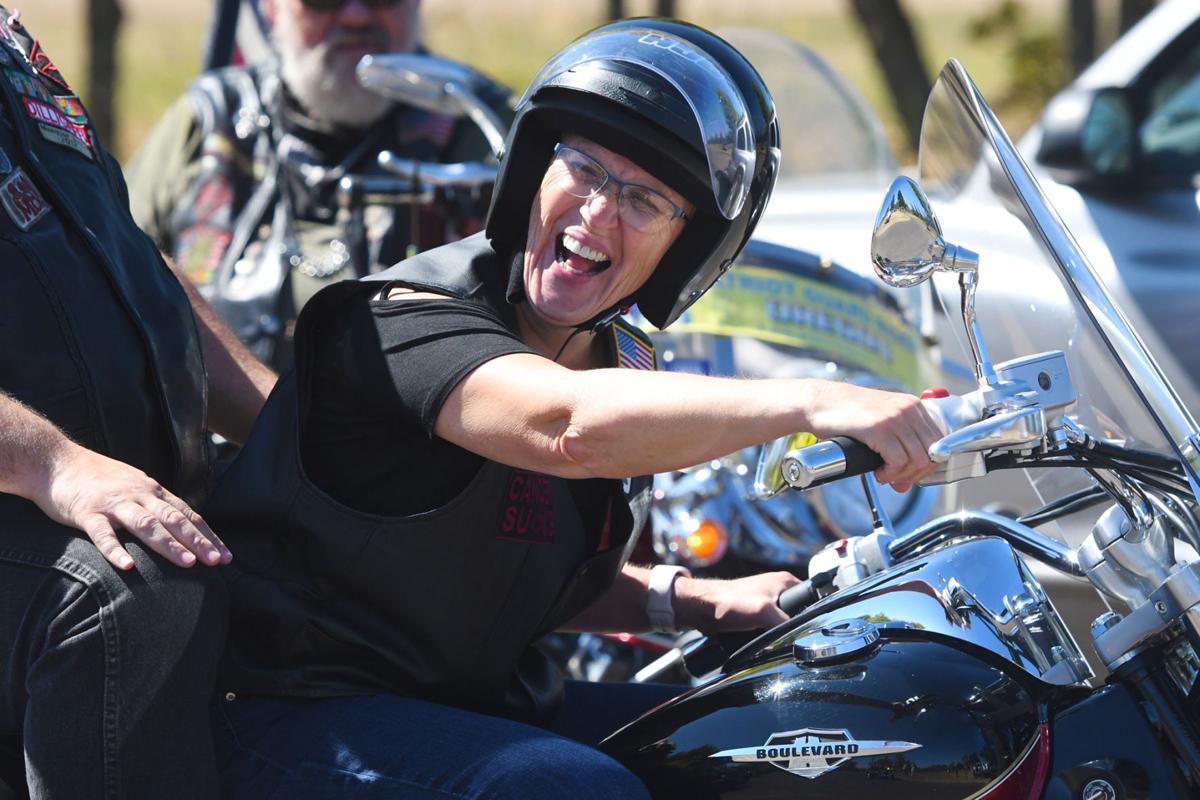 Janice Page laughs as she figures out how to ride a motorcycle gifted to her by the Patriot Guard Riders and the Albany American Legion during a celebration for Page and her son, Joshua Brennan, Saturday in Philomath. 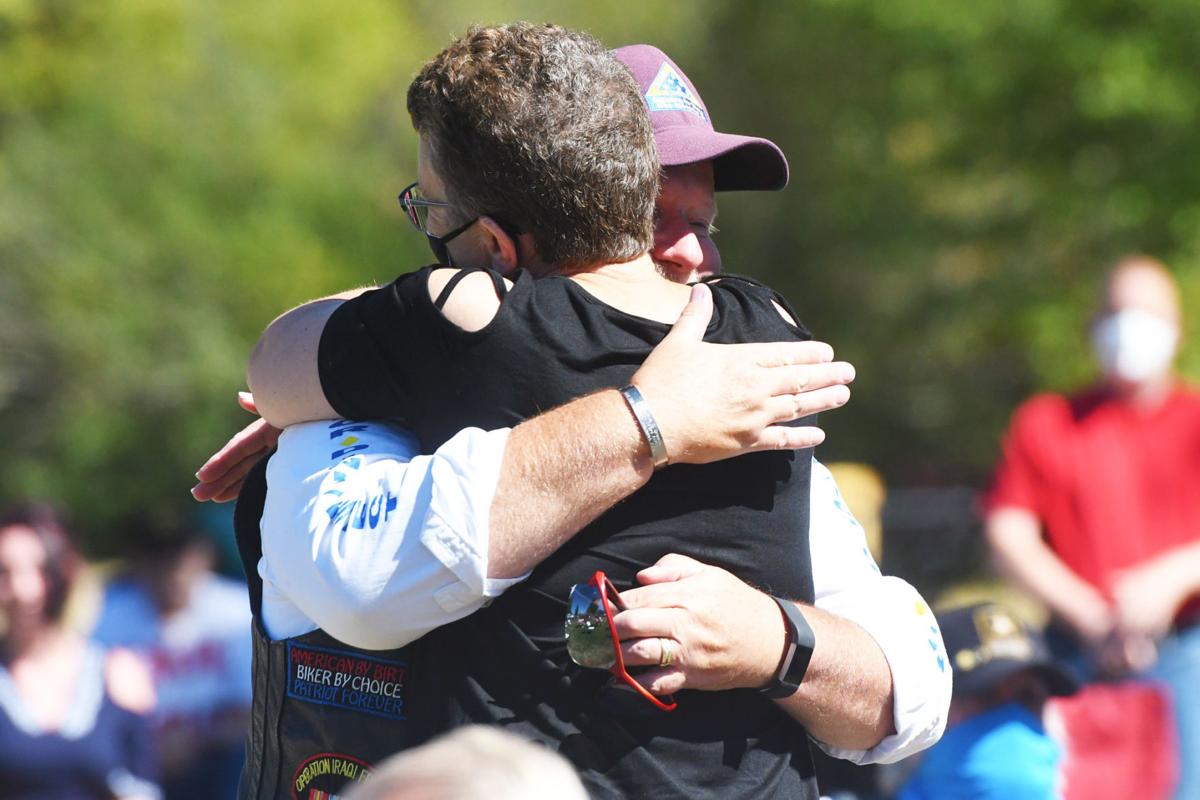 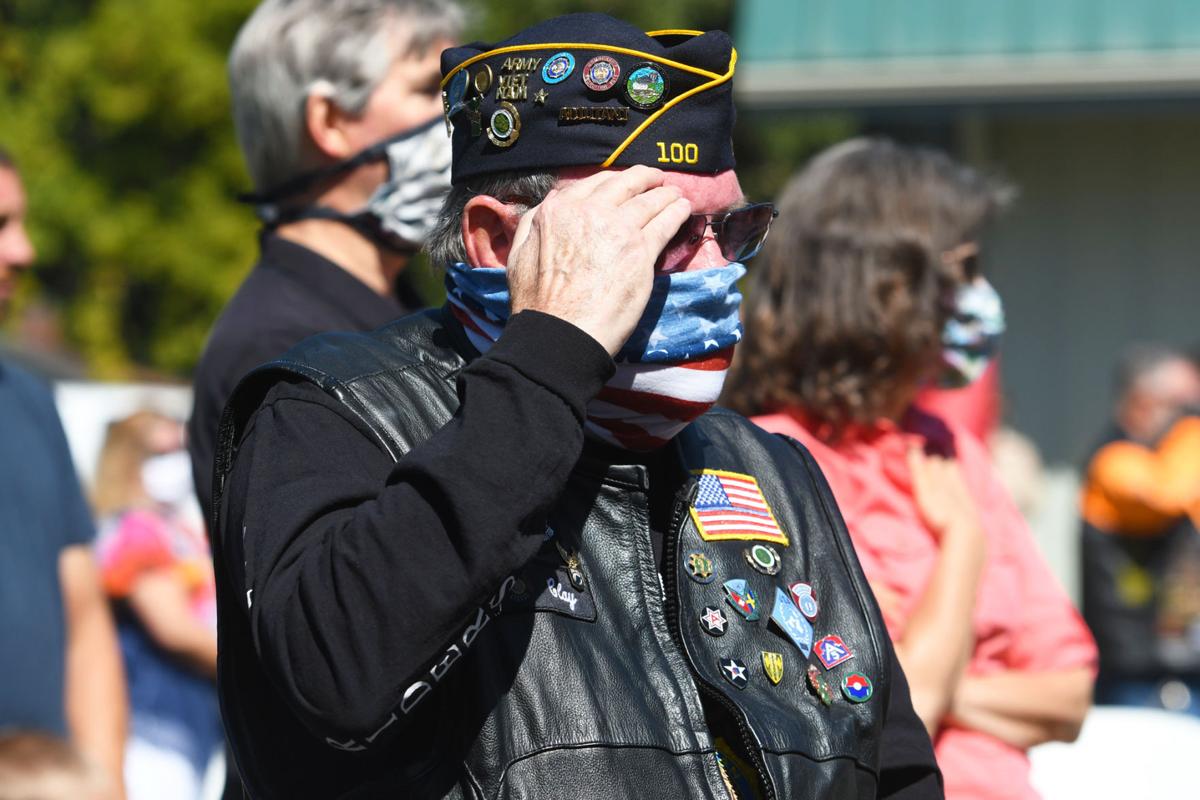 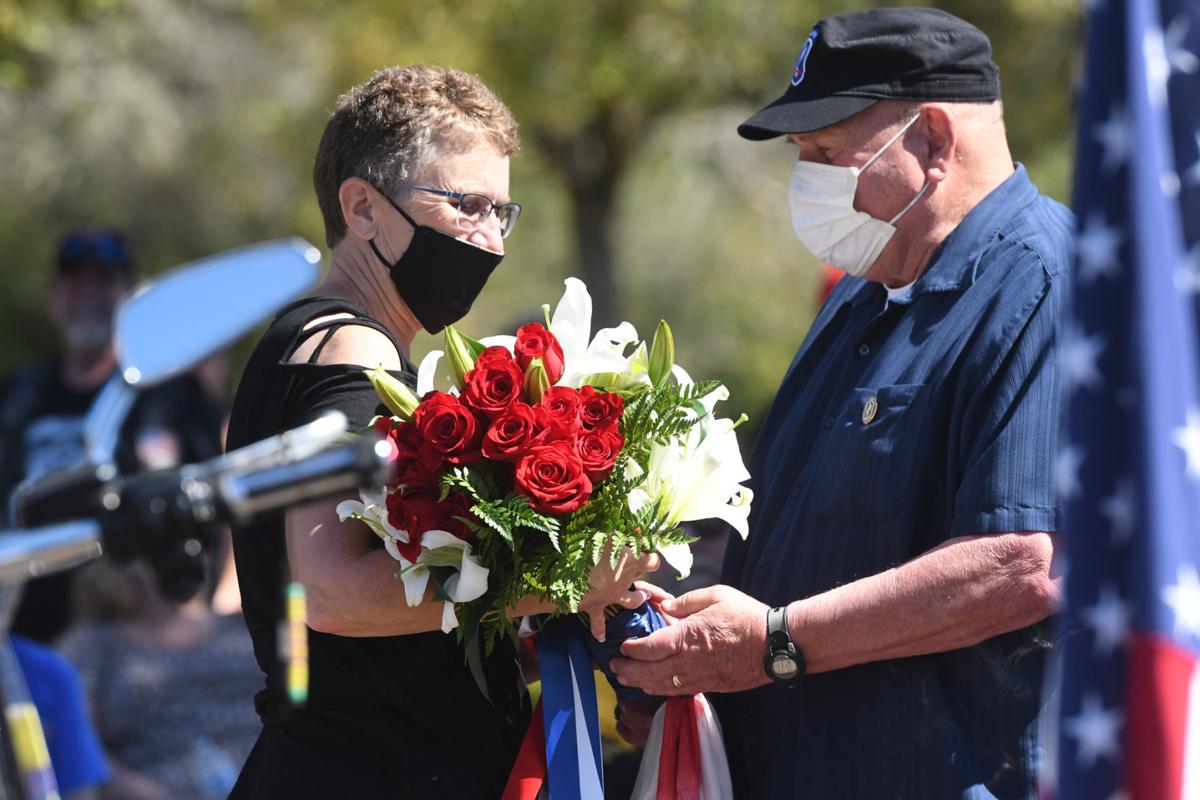 A Philomath veteran’s dying wish came true Saturday when she got the ride of her life — a motorcycle of her own.

Janice Page, a U.S. Army vet diagnosed with stage 4 bladder cancer, was gifted a 2013 Suzuki Boulevard with a trike kit from the Patriot Guard Riders at Philomath City Park. Page lost her son, paratrooper Sgt. Joshua Brennan of the 173rd Airborne Brigade Combat Team, when he was killed in action in Afghanistan in 2007. The Patriot Guard Riders escorted his body to his funeral and ever since, she’s wanted to become a rider herself.

“The experience of the Patriot Guard honoring my family was so amazing,” Page said. “I just want to pay that forward to other families.”

With a prognosis of up to nine months, Page told PGR Northwest District Capt. Debbie Shoemake that she wanted to finally try her hand at driving a motorcycle during other PGR events similar to that of her son’s. Shoemake and her fiance, state PGR Capt. Smokie Parrack, went above and beyond to make that wish come true.

“Janice is just this sweet woman,” Shoemake said. “She has gone through hell.”

According to Shoemake, Page overcame her cancer once and entered remission last year. However, when she found out her cancer metastasized, she decided not to put herself through chemotherapy again.

“She beat it in November,” Shoemake said, “came back cancer-free, but when she went back in for a checkup, they found it was back with a vengeance. She wanted help in finding a decent (motorcycle) because she didn’t know anything about bikes (or) trikes.”

So Shoemake said that the least she could do was make Page’s wish finally come true. She and Parrack, with the help of the Albany American Legion Post 10, created a GoFundMe page with a goal of $10,000 in order to give Page her own motorcycle. After about a month of fundraising, they surpassed their goal and, when they found a bike in Portland with only 5,600 miles on it, they knew they’d hit the jackpot.

After decking it out with a trike kit to make the riding experience easier on Page, they decided to put the extra money toward detailing the bike at Oregon Design Co., in Gresham with photos of Page and her family — including Brennan’s Army portrait. Also included were accessories like a helmet and a custom-embroidered biker vest with the help of Cruise-In Consignment in Vancouver, Washington.

Page said when she asked Shoemake if she could learn how to ride a motorcycle, she didn’t expect in her “wildest dreams” to get her own, let alone the pomp and circumstance that came with it.

“I just thought this was something neat that I would be able to do,” Page said. “This is just crazy awesome.”

Page herself served in the Army as a military officer for six years, then worked as a Malheur County sheriff’s deputy for two decades. She then settled in Philomath just a few years ago.

“She's just given so much to the communities, not only from her son’s passing but also in her life’s work,” Shoemake said.

Philomath Mayor Eric Niemann and City Manager Chris Workman were present at the gifting ceremony Saturday. After giving praise to Brennan’s service and that of Vietnam and Iraq veterans in the crowd, Niemann honored Page’s sacrifices.

“Janice is fighting her own battle right now — it’s a battle called cancer,” he said. “But Janice has a bucket list, and at the top of her bucket list was to ride with the Patriot Guard Riders.”

Page said she’s thankful to still be able to enjoy her “surreal” gift.

“She’s an incredible woman, and we think that she has an amazing story that deserves to be shared,” she said. “Everyone has shown their hearts and come together. It’s truly beautiful.”

+16 Gallery: Janice Page, mom of fallen solider, is gifted the ride of her life

“She’s an incredible woman, and we think that she has an amazing story that deserves to be shared. Everyone has shown their hearts and come together. It’s truly beautiful.”

For more photos from Saturday's event, go online to PhilomathExpress.com.

Janice Page laughs as she figures out how to ride a motorcycle gifted to her by the Patriot Guard Riders and the Albany American Legion during a celebration for Page and her son, Joshua Brennan, Saturday in Philomath.