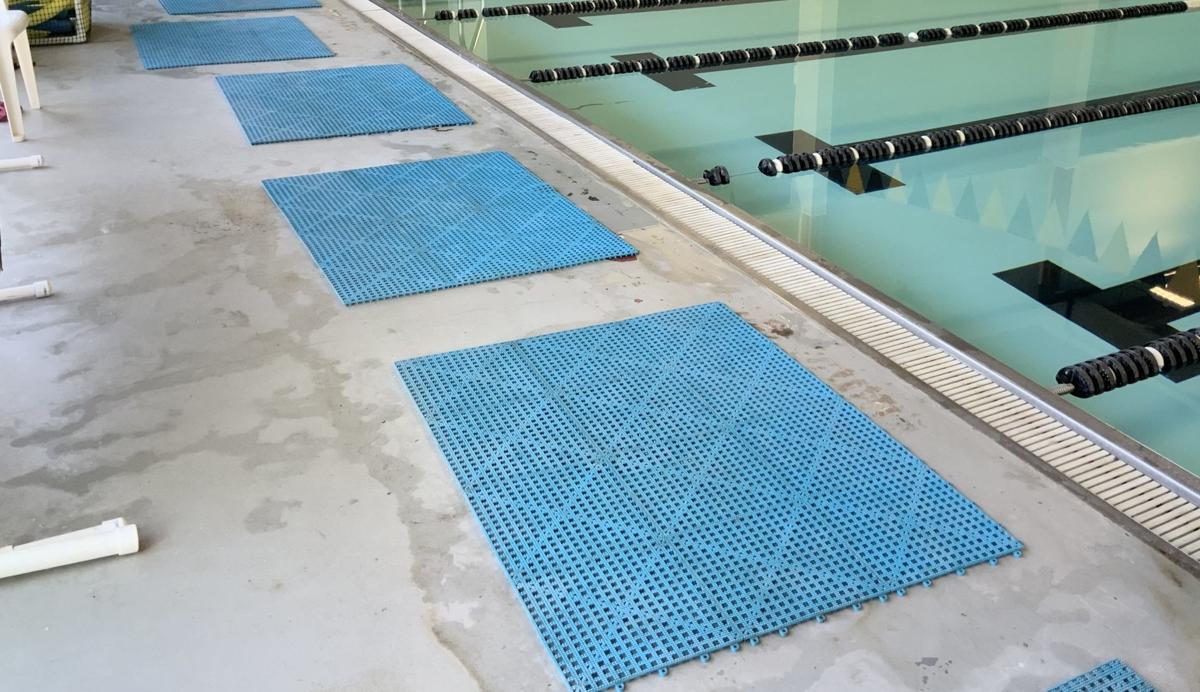 Mats currently sit on the deck at Clemens Community Pool. A maintenance project in September is planned to reduce slippage. 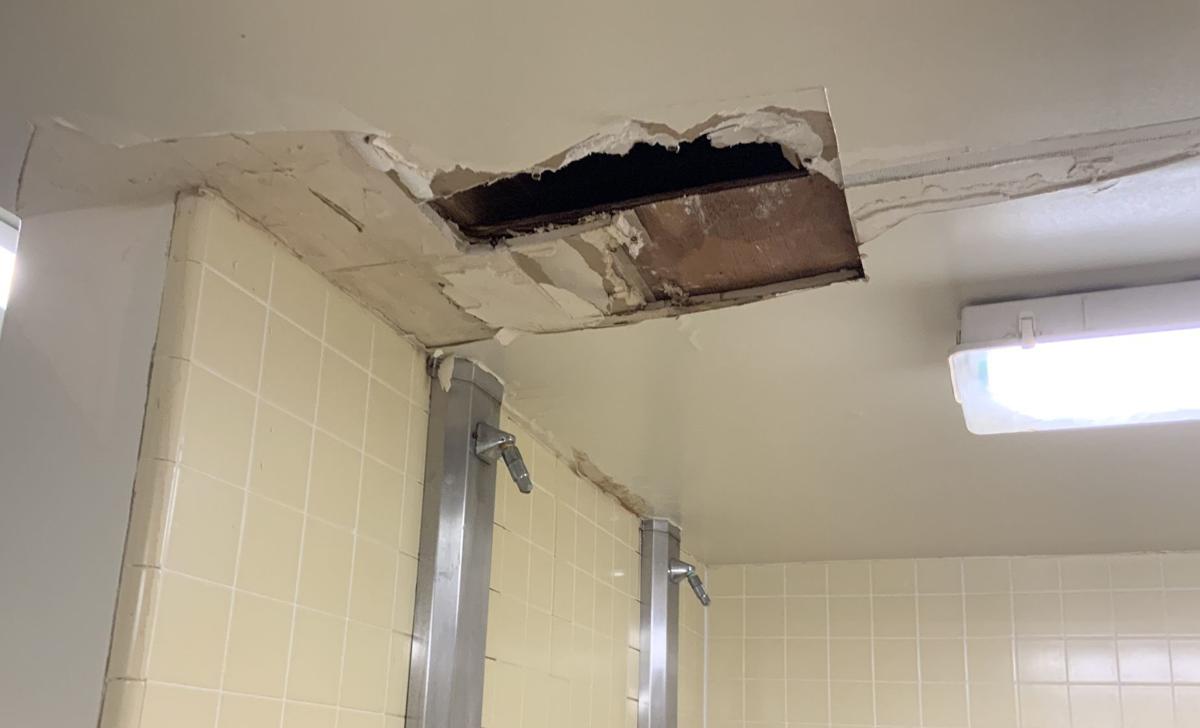 Part of the ceiling in the boys locker room showers came down late this summer. It is not on the immediate fix list in September, but superintendent Buzz Brazeau said a decision will be made to either encapsulate or abate asbestos found in the space while installing new plumbing. 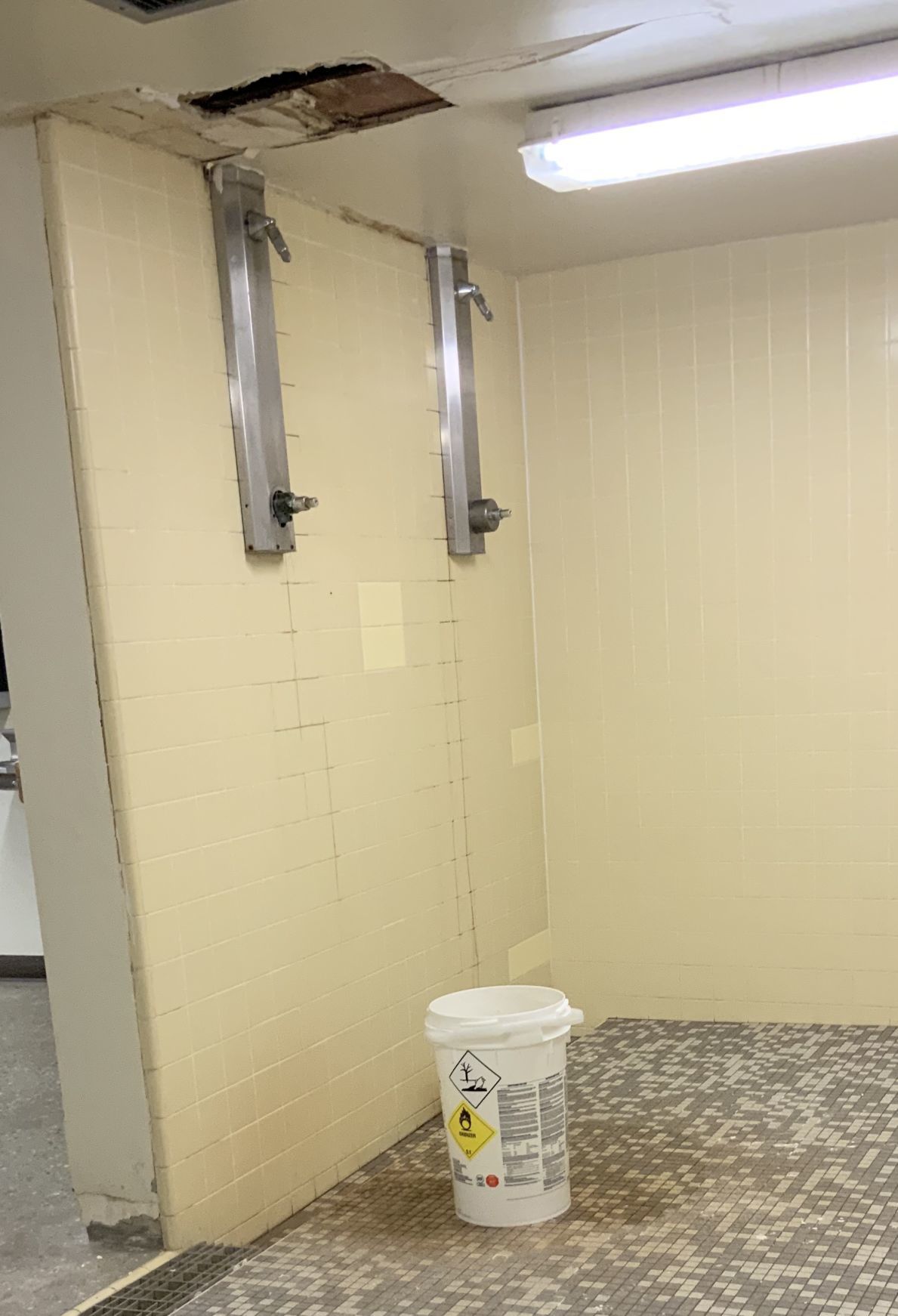 Part of the ceiling came down in the boys' showers. 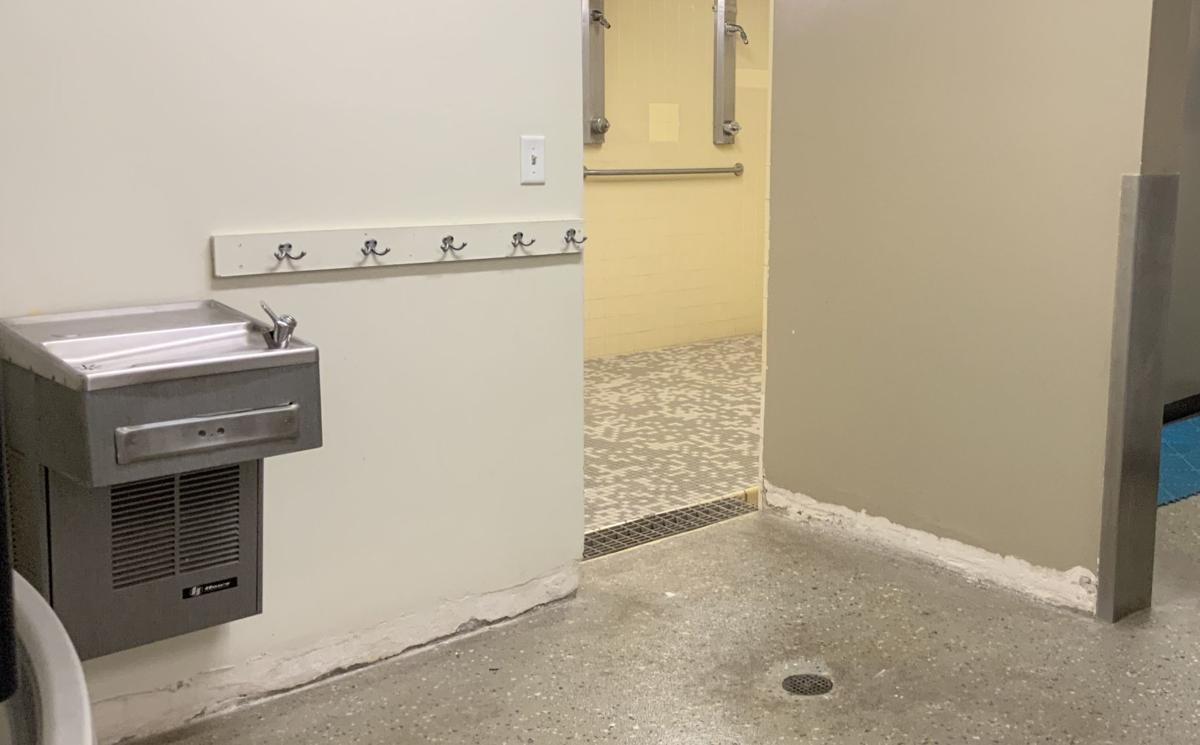 Damaged wall and molding can be seen in the boys locker room, a problem that also exists in the girls locker room.

Brazeau said walls and molding in the boys’ and girls’ locker rooms will be repaired along with work to reduce slippage in the pool deck area.

“In the men’s and women’s locker rooms, there are areas that need to be addressed with some water damage on the walls, so we’re going to get in there,” he said in reference to sheet rock and rubber molding near the flooring. “We’re going to fill in where we need to fill in but then we’re going to cover it with probably about a 4-by-8 sheet of waterproof material.”

The expense of doing the locker room and pool deck work will come out of the school district’s maintenance budget, Brazeau said. School maintenance staff will do the work.

Slippage has been a concern in the pool’s deck area for some time and Brazeau it’s an issue that needs to be solved. Exactly how it will be solved was to be determined, although he added that there are a lot of options to consider.

“We’re going to use a synthetic covering so we don’t have to worry about it for a number of years or we’ll get the rubber matting to make sure it’s all protected,” he said. “But right now, we have some areas that we are concerned about from a slippage point of view.”

After talking to outgoing pool operator Ellen Luke, Brazeau said he discovered that a lot of pools routinely slow down or shut down in September for maintenance issues anyway. Plus, it’s a time when the school district’s maintenance staff has a little more time following a rush of summer projects to get completed.

“It’s not the 10-year solution; it’s the solution for us to become operational again,” Brazeau said. “It’s what we can do in that 30-day window.”

Another problem cropped up late this summer which forced the shower area in the boys’ locker room to be closed. A leak in the ceiling brought down tile and materials and remains exposed.

“We’re going to seal that area off because as we went up there, of course, it’s old asbestos,” Brazeau said. “What I’ve seen happen in the past is there are two things you can do with asbestos — you can abate it or you can encapsulate it.”

Fixing the plumbing will be a need in either case and Brazeau said sealing off the areas with asbestos would be kinder to the budget.

“At this point in time, it’s not something we can fit into the window we’re talking about so we’ll get bids on it,” Brazeau said. “The one thing we hope is if we can get a bid on it that’s reasonable and we can get in there.”

Since the incident, males wanting to take showers could go down the hallway to the showers located near the gym. But with school now in session, Brazeau said a family restroom, which does have a shower in it, can be used.

In another issue involving the pool, a new certified operator is needed. The closure for maintenance buys Brazeau more time to get the position filled.

“I’m going to try to do that as quickly as I can,” he said. “The auxiliary benefit is it gives us a little bit more time but the quicker we get somebody on board, then the quicker they can be a part of what we’re doing, how we’re doing, what’s best, etc., etc.”

One of the challenges with finding a new pool operator involves the certification process. Osborn Aquatic Center’s lead operator and an assistant — both of whom could lead such a class — recently left for Eugene, Brazeau said. He added that although they still plan to teach the class, which he believed runs about two days, it would be later than they originally planned because of the relocation.

CORVALLIS — William Chase Hargrove was given a life sentence for murder during a hearing in Benton County Circuit Court Thursday morning.

Mats currently sit on the deck at Clemens Community Pool. A maintenance project in September is planned to reduce slippage.

Part of the ceiling in the boys locker room showers came down late this summer. It is not on the immediate fix list in September, but superintendent Buzz Brazeau said a decision will be made to either encapsulate or abate asbestos found in the space while installing new plumbing.

Part of the ceiling came down in the boys' showers.

Damaged wall and molding can be seen in the boys locker room, a problem that also exists in the girls locker room.