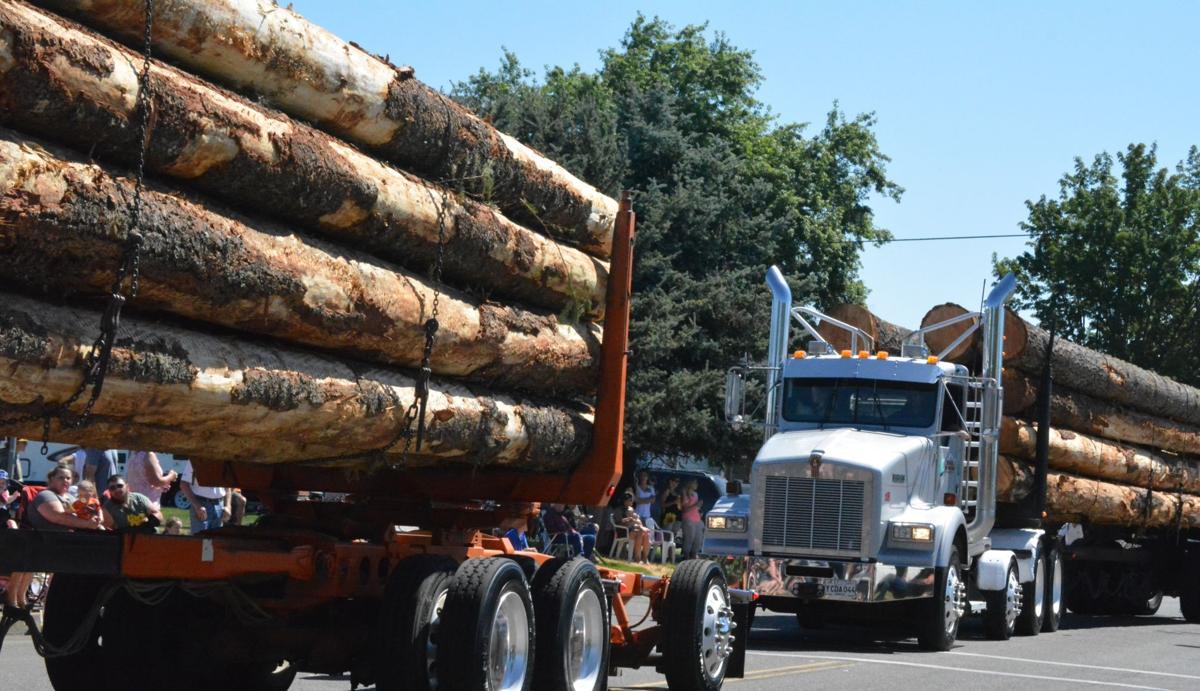 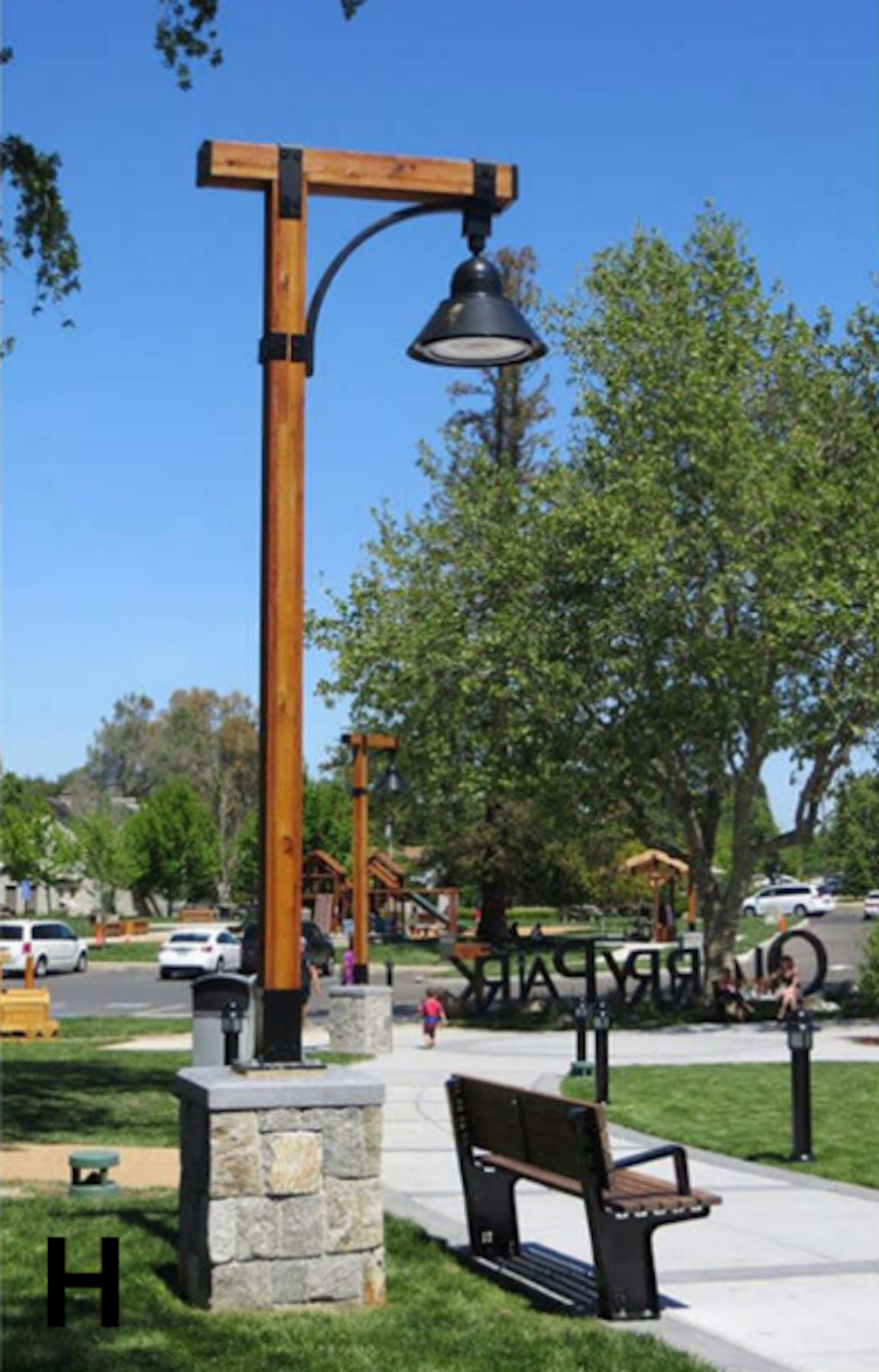 This image of timber-themed light pole attracted the most interest in that category among respondents at a recent farmers' market.

Based on survey results collected online and at a recent farmers’ market, Philomath residents clearly favor a timber-themed design when it comes to the downtown’s new look.

“There was definitely no interest in a modern, futuristic look,” said Gary Conner, who has served as the Planning Commission’s lead on collecting project data. “There was a little bit of an interest in the historic-steel look but there was a lot of interest in timber.”

The surveys were conducted in connection with theme preferences for the Downtown Streetscape Improvements Project, which is scheduled to go out for bid in late 2021. Current plans call for construction to occur during the spring and summer of 2022.

Philomath has been working toward a downtown redesign for several years and in those earlier plans, engineers primarily focused on standard designs seen in most cities. Conner said City Manager Chris Workman wanted to see if residents would be interested in something different.

“He and I went back and forth with the engineering consultants a few times to see if there was something that wasn’t completely custom and super expensive and they did find some,” Conner said. “And actually Chris dug up wood products that are available as a catalog item.”

Those catalog items were what people voted on in the surveys — less-expensive options instead of pricey custom designs.

“In the three hours, there was a steady stream of people,” Conner said about the farmers’ market event, which allowed people to place stickers on images they preferred. “We were talking about the project and a few other issues constantly the whole time, so it was very good.”

The online survey asked questions on each element with participants choosing what they liked a lot, what they disliked, or if they were neutral.

The results fit in with Philomath’s history and traditions as a timber town. In its earliest years, the city thrived with farming and ranching as main industries along with the activities of the local college. In the late 1800s and early 1900s, loggers transformed the region into a major center of lumber production.

Through the surveys, Conner said specific preferences included wood benches with metal frames, and wood trash receptacles and light poles. Downward light fixtures were most popular. Opinions on bike rack designs varied and there was interest expressed in a whimsical, art-focused design for bike racks, such as the style seen in front of the library.

“Based on the consensus of the results, I would guess that we would end up with some timber or wood-framed elements but it’s not certain exactly what they are,” Conner said. “But hopefully we’ll have input into that process over the winter.”

The engineering consultant has the design element information and is currently preparing a preliminary plan that outlines the extent of the project, including scope of the work and concepts. Once the report is finished, it will be forwarded to the Oregon Department of Transportation for review.

“There is some precedent to ODOT accepting timber elements, so we’ll see where it goes,” Conner said.

Following comments from ODOT and the city, the document advances and becomes a design acceptance package, commonly known in the industry as a DAP. Final design would follow later on.

“That will be like in the November to February time frame in which they will actually be doing the design, selecting the particular elements, the locations of benches and all of those sorts of details,” Conner said. “The reason they wanted to know now was to get an idea of which direction they were going with the lighting because it can have an effect on pole placement and electrical service location requirements and all of those behind-the-scene details.”

Beyond the design element discussion, Conner also has been hoping for a few other areas to be addressed as the process moves forward. For one, he’d like to see one more crosswalk included in the ODOT project area.

“That particular crosswalk on the west side of 15th across Main is not included in this project,” Conner said. “But all of the subsequent crosswalks all the way down to Eighth are included. It’s as if one crosswalk got left out.

“Whether we get ODOT to add it to the project or the city does an additional piece, I don’t know,” he added.

Conner also has concerns over the wide driveway that leads in and out of the Chevron station. It’s not uncommon to see motorists head down Main Street in the wrong direction after a tank fill-up.

“I’ve maintained for a long time that they should do something there and I’ve started talking to people about it and it’s right there at the end of the project,” Conner said, adding that there are no ground-level cues to inform drivers of the one-way street. “That driveway is 65 feet wide, it’s wider than Main Street. It’s not right.”

Conner anticipates providing a report back to the Planning Commission in the September through November time frame.

“Based on the consensus of the results, I would guess that we would end up with some timber or wood-framed elements but it’s not certain exactly what they are. But hopefully we’ll have input into that process over the winter.”

Only a few weeks shy of its one-year anniversary in Philomath, Dirt Road Brewing’s taproom on the corner of Main and North 13th has seen signi…

Editor's note: This story has been updated from an earlier version.

If you need an example of the global reach of HP Inc's inkjet printing technology, just think about the millions — if not billions — of color …

Those interested in checking out the exhibits at the Philomath Museum no longer need to make an appointment. But those who visit must wear mas…

The Oregon School Activities Association isn’t ready to give up just yet on fall sports. Even if those teams are allowed to compete in the com…

New park with a pond, dock coming to Philomath

A new city park to be constructed as part of an agreement with a residential subdivision in Philomath appears to be on the horizon.

This image of timber-themed light pole attracted the most interest in that category among respondents at a recent farmers' market.