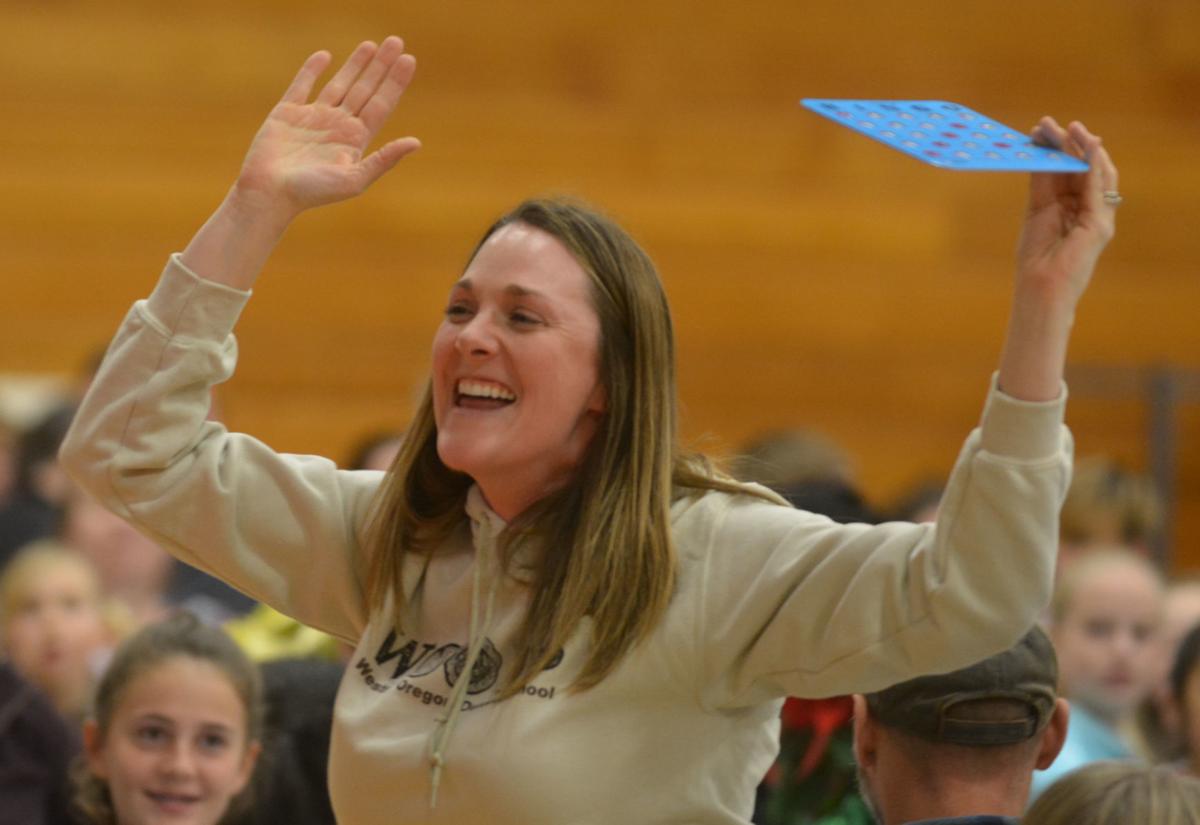 Jen Grube reacts to getting a bingo during Friday night's event. Grube, who has participated all 16 years, failed to get a turkey, however, on a tiebreaker. 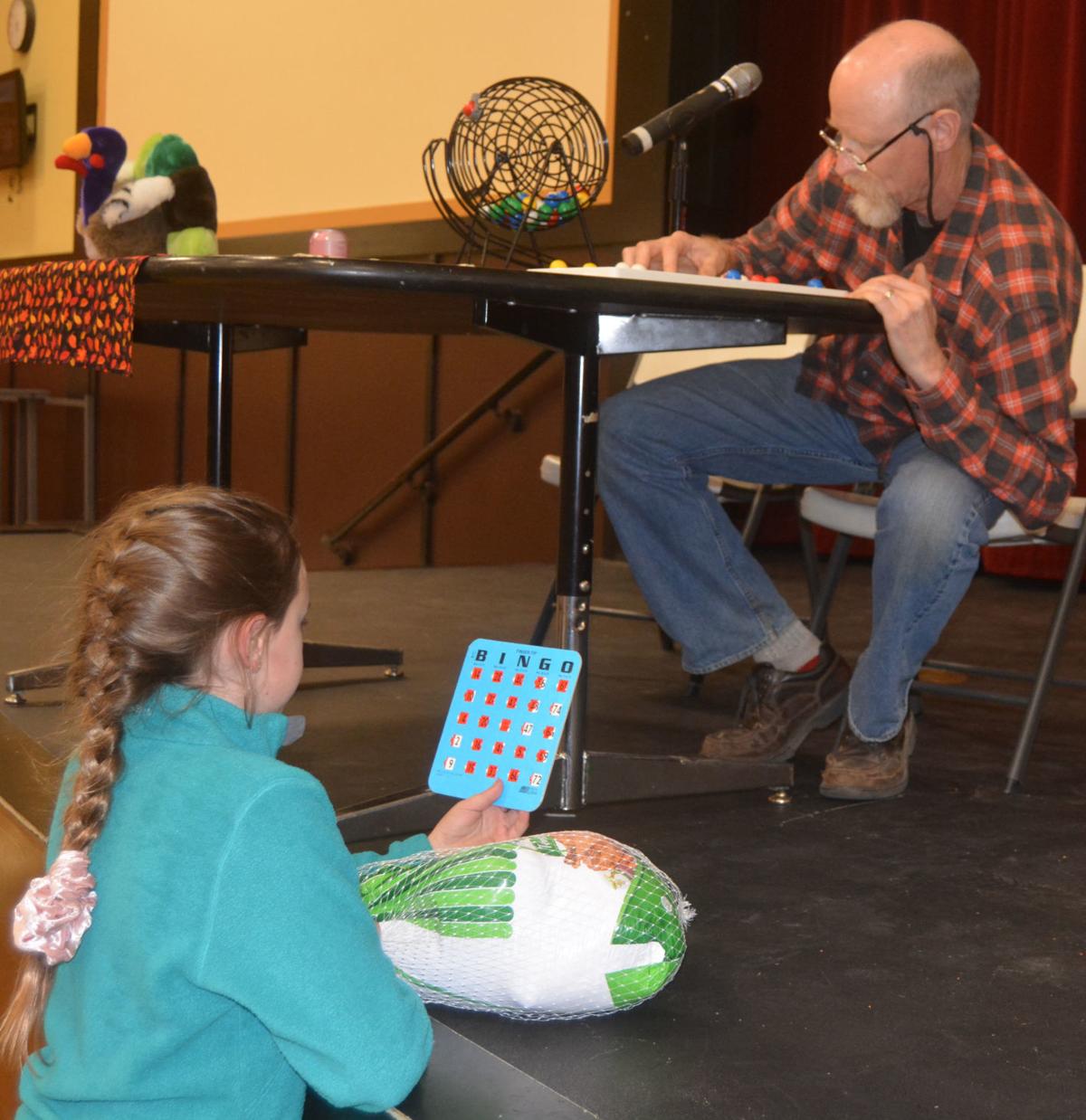 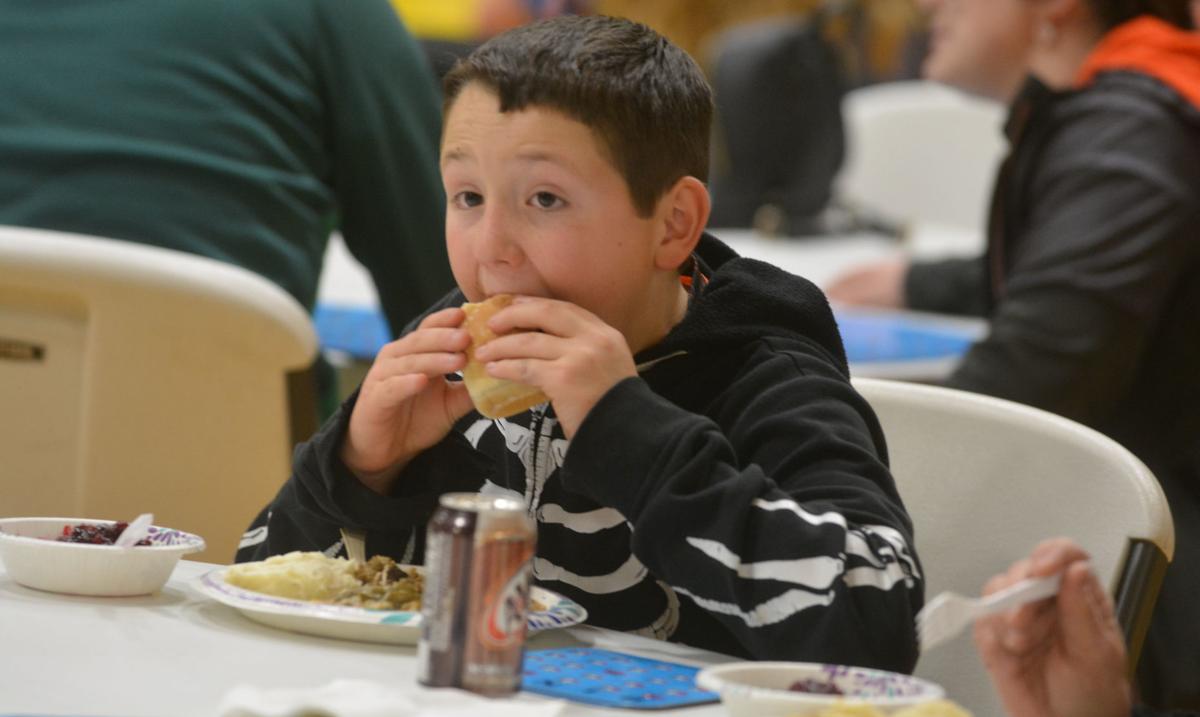 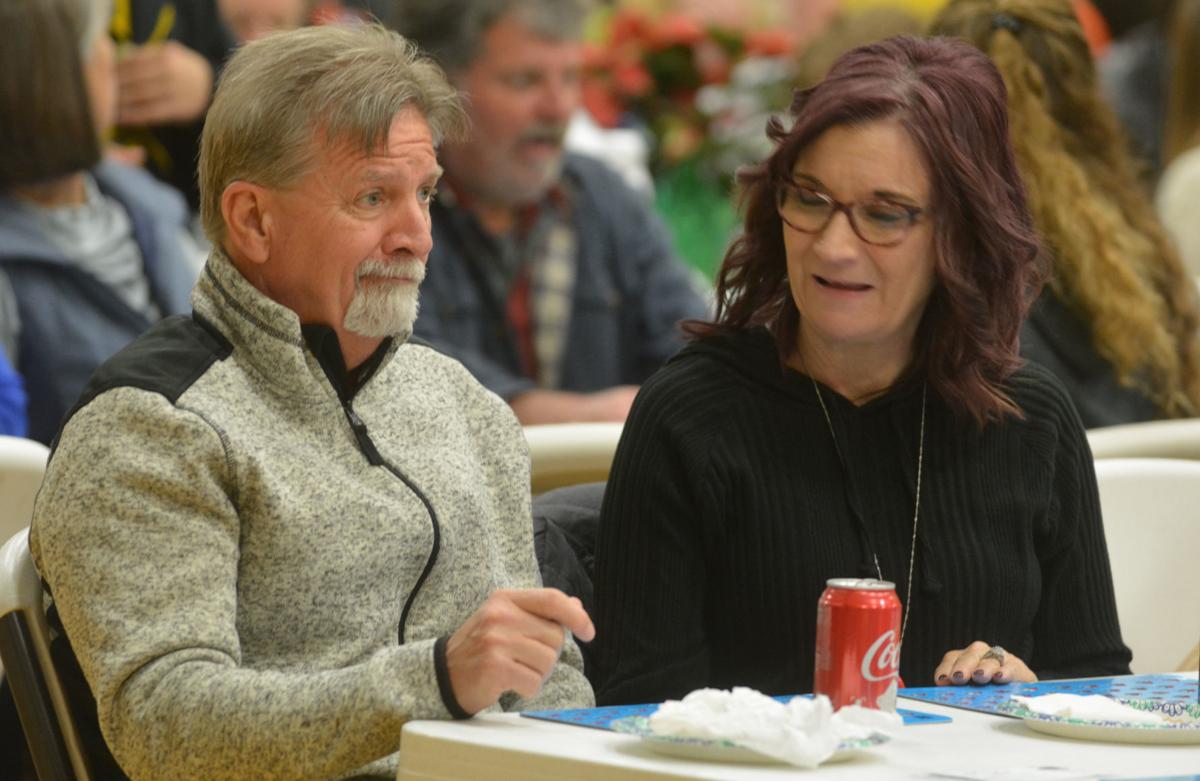 Craig and Debra Bybee, of Albany, check their bingo cards. 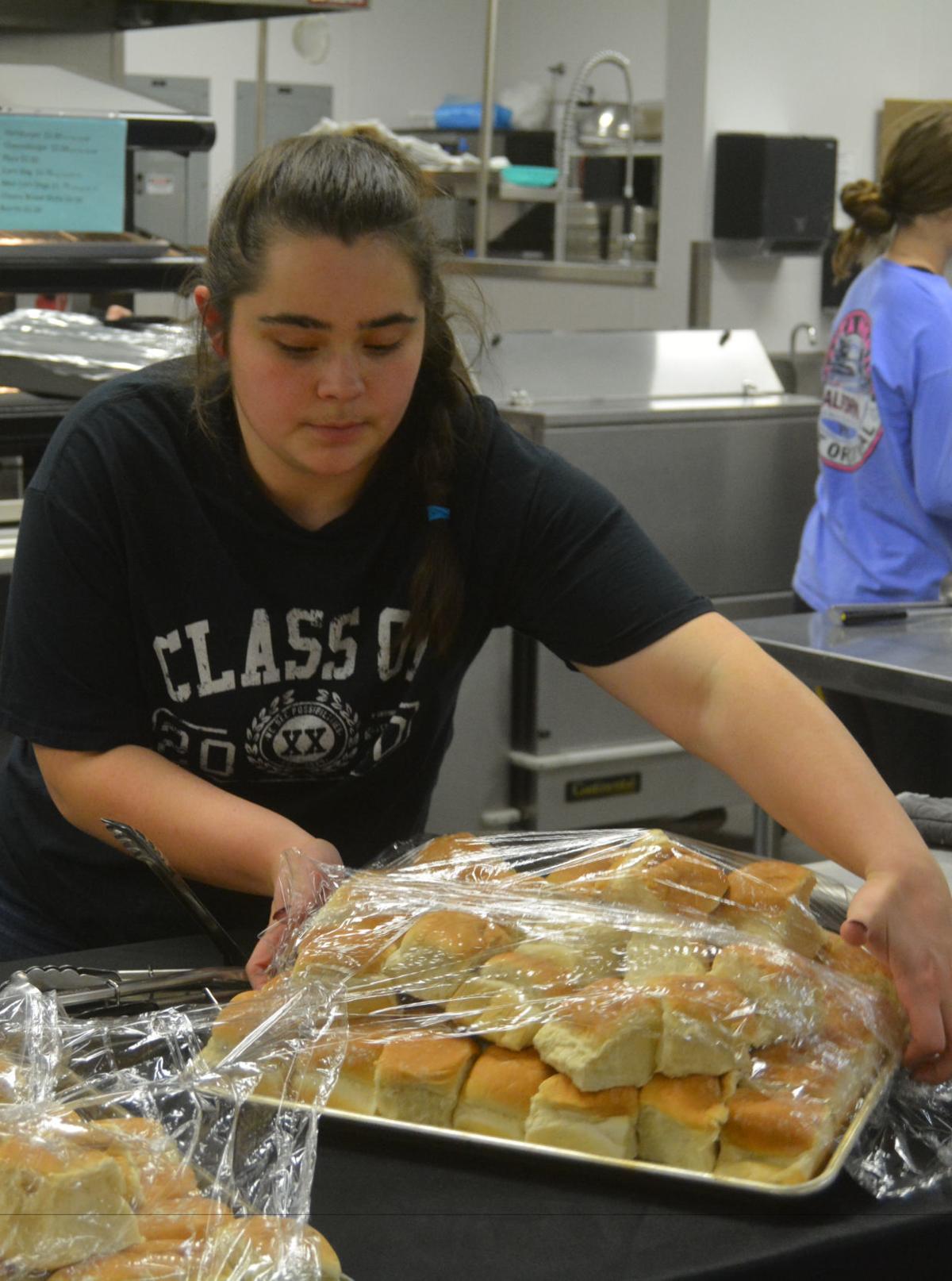 Philomath senior Jordyn Foster was among the student volunteers in the kitchen serving up turkey dinners. 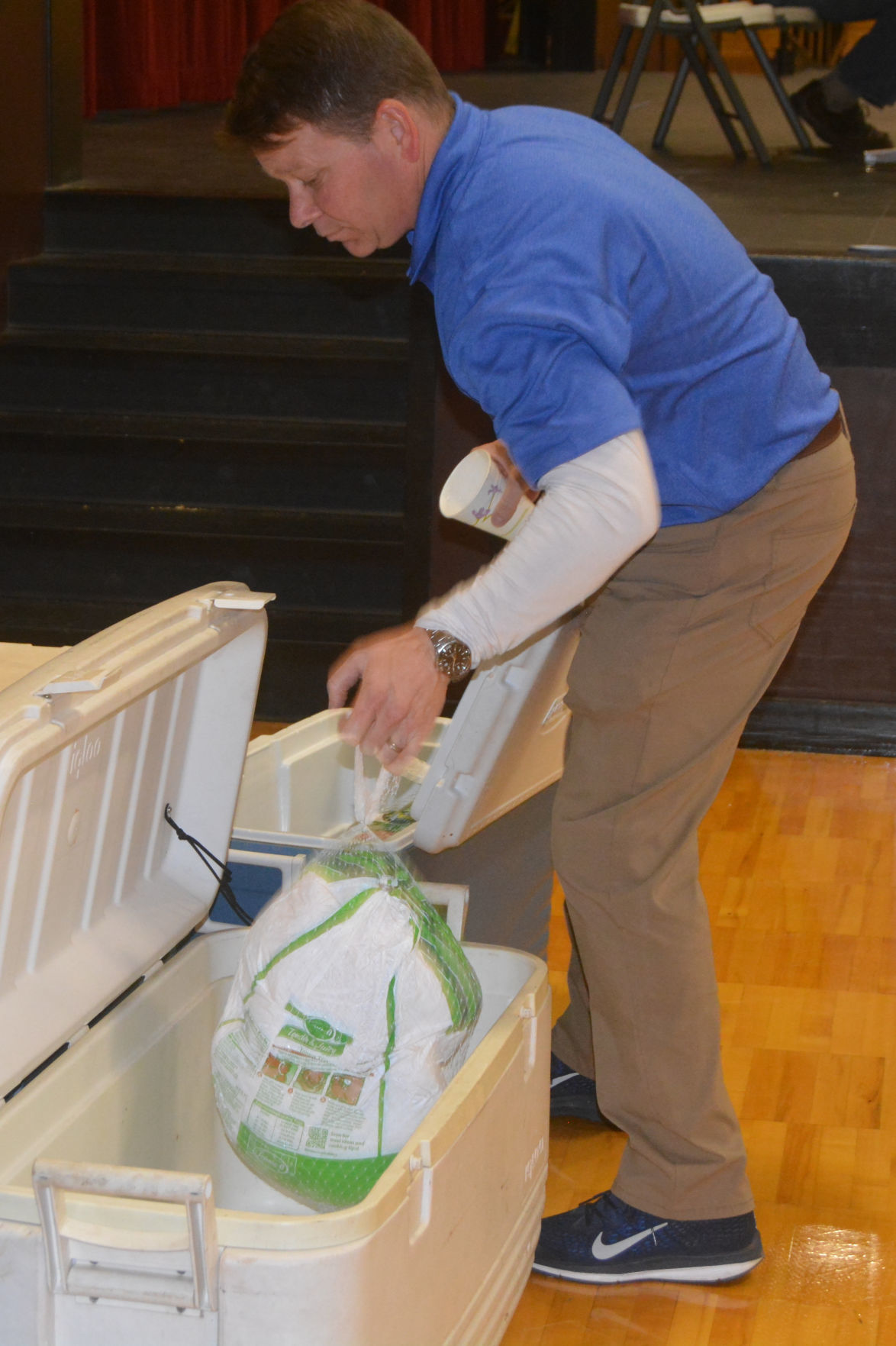 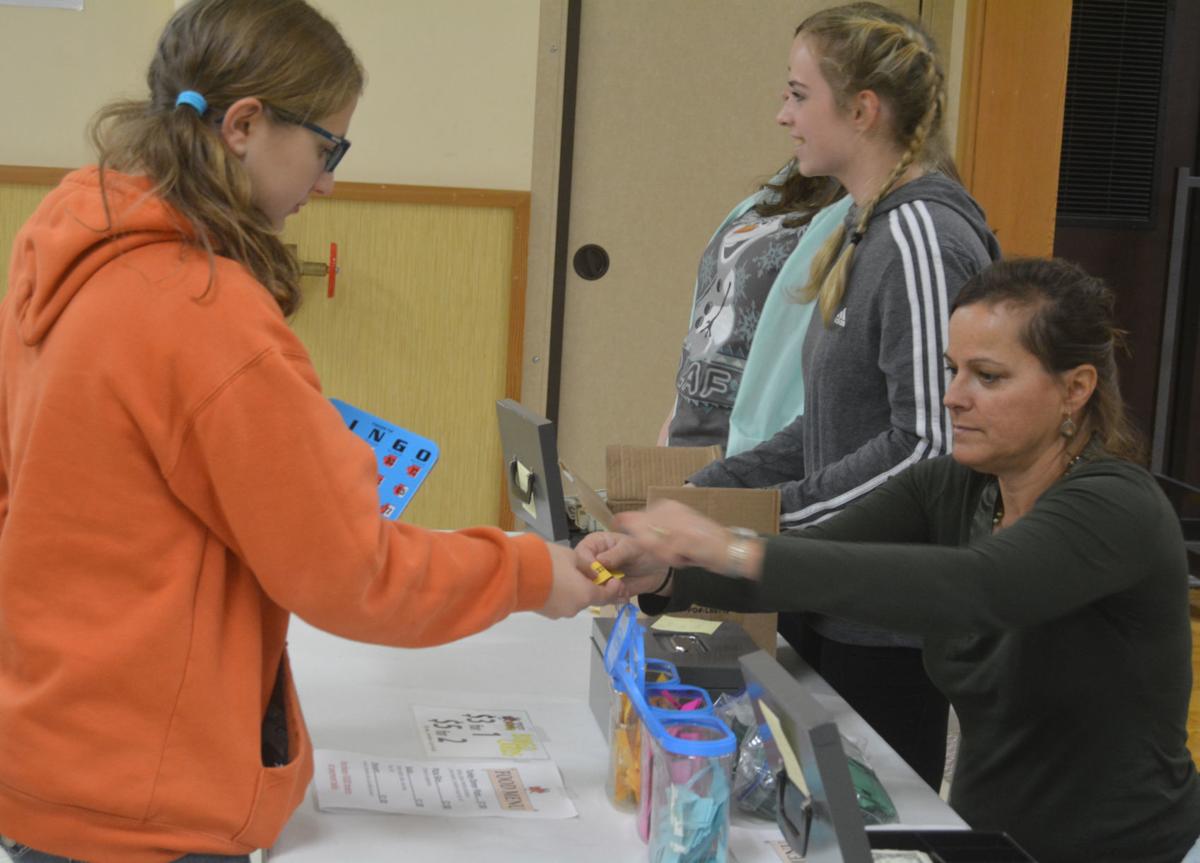 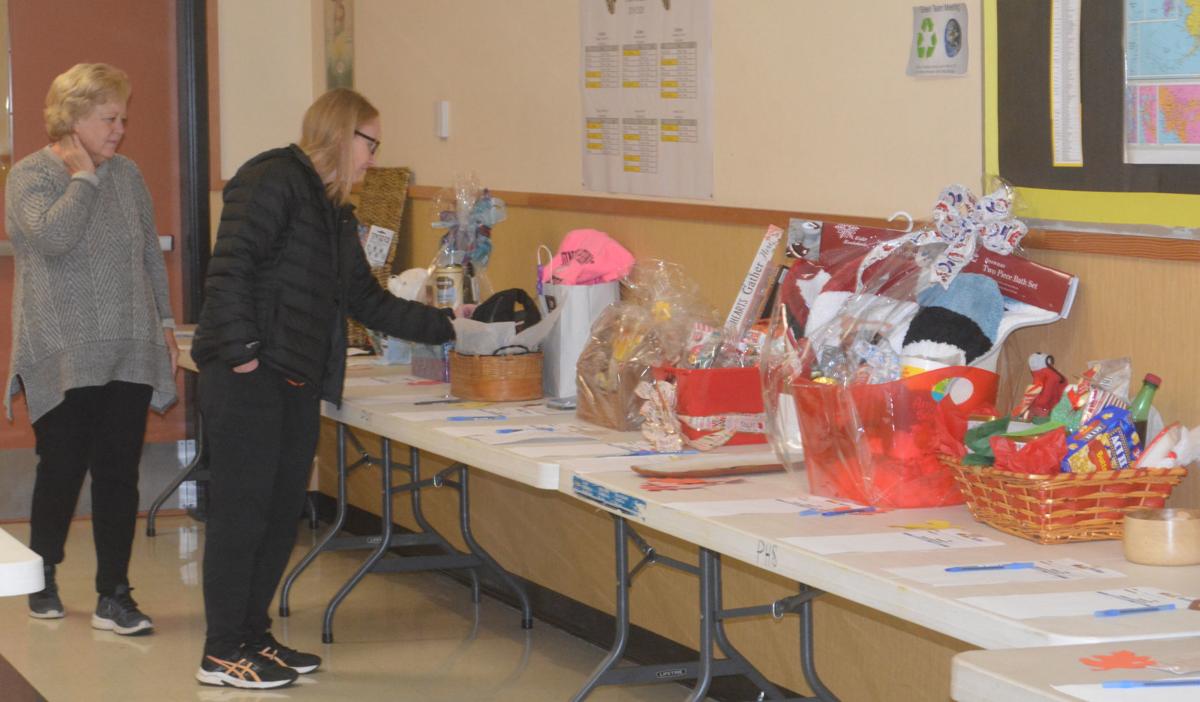 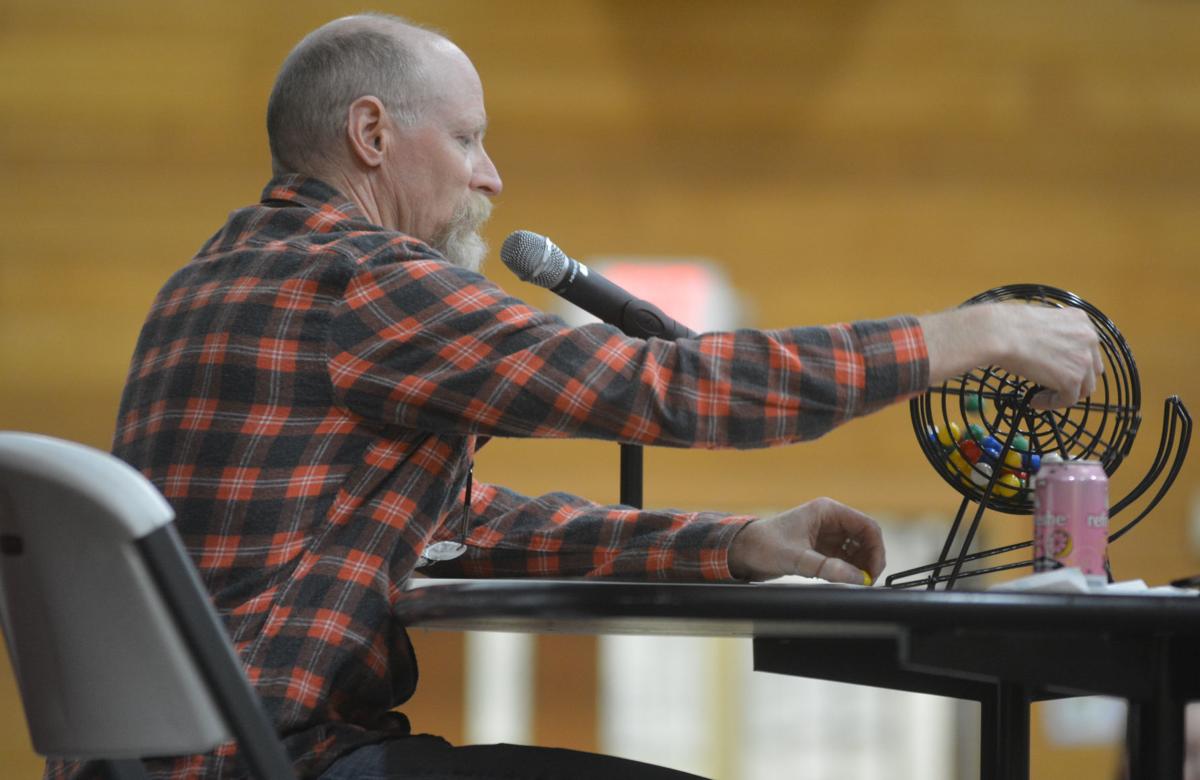 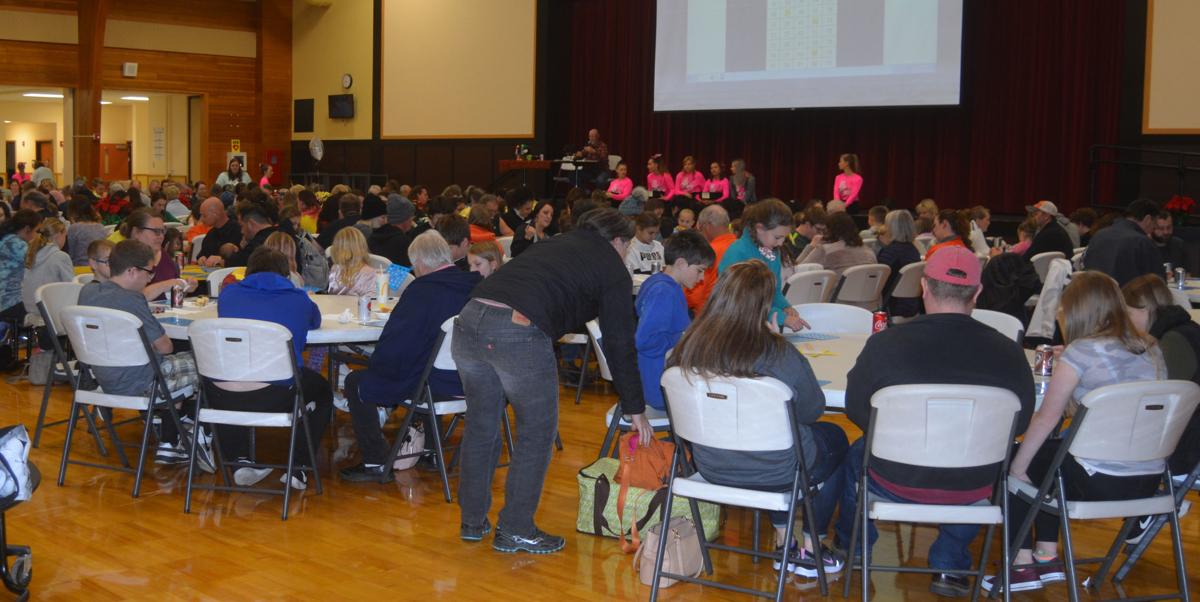 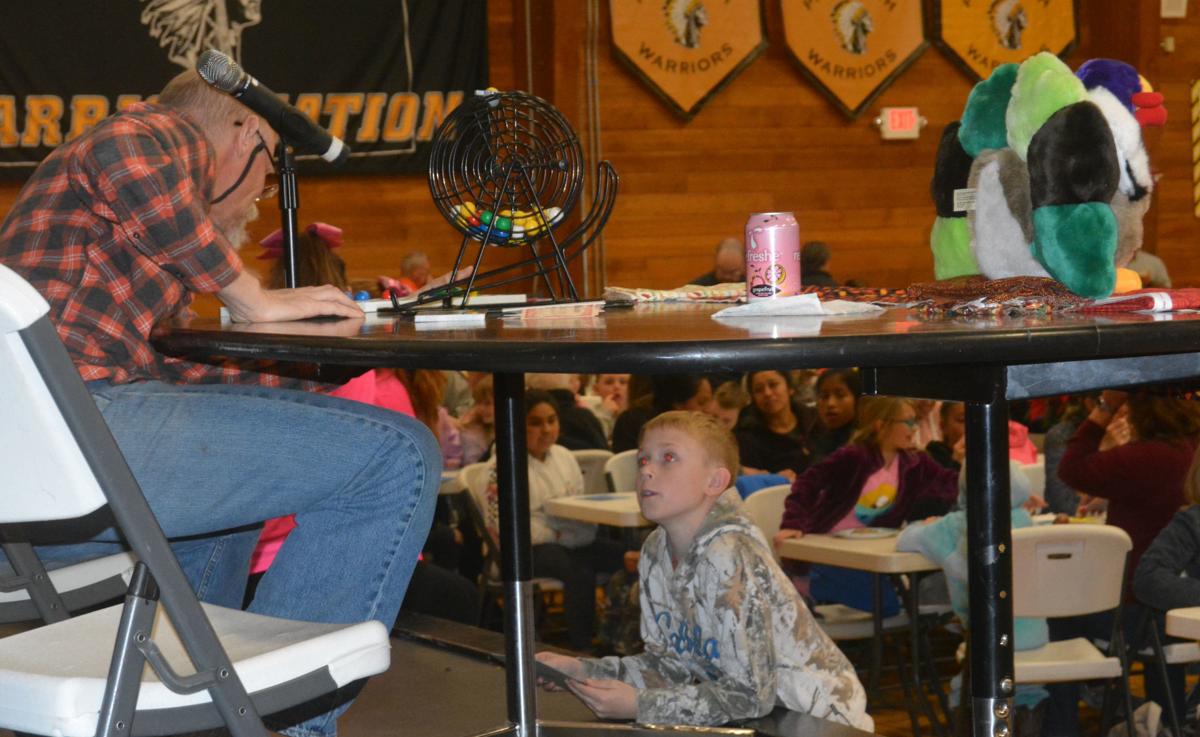 First of all, the Philomath Middle School’s outdoor school program no longer needs to worry about getting the bills covered through fundraisers. Measure 99 — passed by voters in November 2016 — mandates that all fifth- and sixth-grade students should have the opportunity to participate in a weeklong outdoor program.

Second, participating in such a fun event just brings a smile to the faces of most.

“The thing I love about this is it continues to be such a fun community event,” Grube said, who has been the outdoor school director since 2001. “The attendance has not really seen a year where we’ve seen a massive decline and it’s always fun, people are always happy and having a good time.”

And third, Grube jumped to her feet with joy, performed a few high-fives and headed to the stage after getting a bingo.

“I have yet to win a turkey and I don’t think I’m the only one,” Grube had said perhaps 10 minutes earlier. “I remember the one year, I actually did get a bingo and it was for a turkey and we did the roll-off and the child won. So I graciously left thinking, well, I hope you cook a fabulous meal for your family.”

Then it happened again on Friday night. Grube and two other players were at the stage caught up in a tiebreaker. Soon, it was down to two with Grube still in the running. Let’s just say, she still hasn’t won a turkey.

The event filled up Philomath High’s auditorium with bingo players trying to take home not only turkeys but other prizes as well such as gift cards. Silent auction items ranging from sweet treats to themed baskets fill several tables. Many buy food tickets and fill up on a turkey dinner or the various other food items.

“People donate frozen turkeys and some people year after year just know it’s happening,” he said. “They’ve had children graduate 10 years ago and they come and still bring turkeys and other items. Probably the most sought-after item for winning is like an 18-pack of toilet paper. I don’t really know who it is that brings that in, but someone donates it every year.”

And that’s the big story behind Turkey Bingo — all of the businesses and individuals that support it through donations.

“We have lots of volunteers that go around on the streets and get gift certificates,” said Connie Barnes, who wore the coordinator’s hat for the second straight year. “Several businesses — all you have to do is walk around and say the name of their business (and they likely donated) ... It’s amazing. Once you start going out there and asking for stuff, people just give it to you.”

Organizers put a limit of 10 on turkeys but Barnes said with a laugh that they ended up receiving closer to 20.

A lot of moving parts going into making Turkey Bingo work every year but Barnes said the use of online tools helps with planning.

“It does, but you know, we sort of have a system set up where we have a SignUpGenius and parents can sign up for bringing prizes, for bringing desserts, for bringing silent auction baskets, and I have a couple of volunteers and we keep track of it on a spreadsheet online on Google Docs,” Barnes said.

Philomath’s outdoor school program dates back to 1988 and Camp Tadmor northeast of Sweet Home became its traditional home in the early 1990s. But with Measure 99, contributions from Turkey Bingo are now limited.

“It has allowed us to shift the direction of where the money goes from fundraising,” Bell said. “Some of it goes to outdoor school but then the majority of it goes to what we call the Turkey Bingo accounts at the middle school and those are student body funds.”

Through that system, teachers or staff members can apply for a mini-grant. The application goes to the site council, which determines if an award should be granted.

“Last year, we funded items such as field trips, we also purchased chairs for the choir room, purchased five Chromebooks for a classroom and we also did some hardware materials for our technology class — a variety of items such as that,” Bell said.

“We still have some of the proceeds going into outdoor school for a couple of reasons.,” Grube said. “One is if the state decides to not fund as generously or things like that, or if we have a couple of expenses that lie outside of what the state would cover. There are certain things the state guarantees money for and if we have expenses that pull up outside of that, this money would go toward those things.”

For more photos from Turkey Bingo, go to PhilomathExpress.com and look for a gallery.

For the past month, sixth-graders at Philomath Middle School and a number of high school students have been eagerly anticipating this week: Ou…

Jen Grube reacts to getting a bingo during Friday night's event. Grube, who has participated all 16 years, failed to get a turkey, however, on a tiebreaker.

Craig and Debra Bybee, of Albany, check their bingo cards.

Philomath senior Jordyn Foster was among the student volunteers in the kitchen serving up turkey dinners.