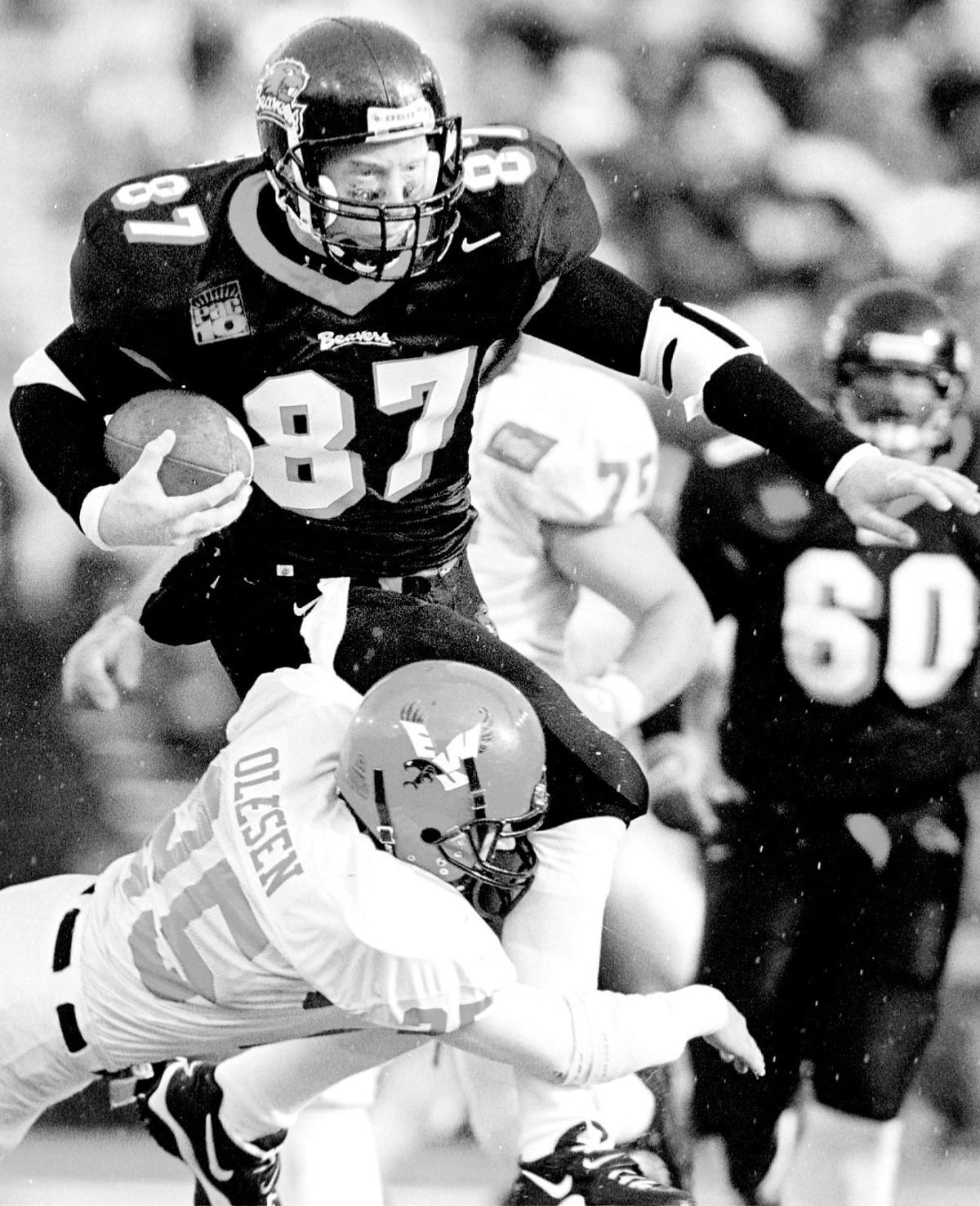 Oregon State tight end Marty Mauer carries the ball against Eastern Washington in the 2000 season-opener. The Beavers managed a 21-19 win to start 1-0. Mauer finished with five catches for 61 yards. 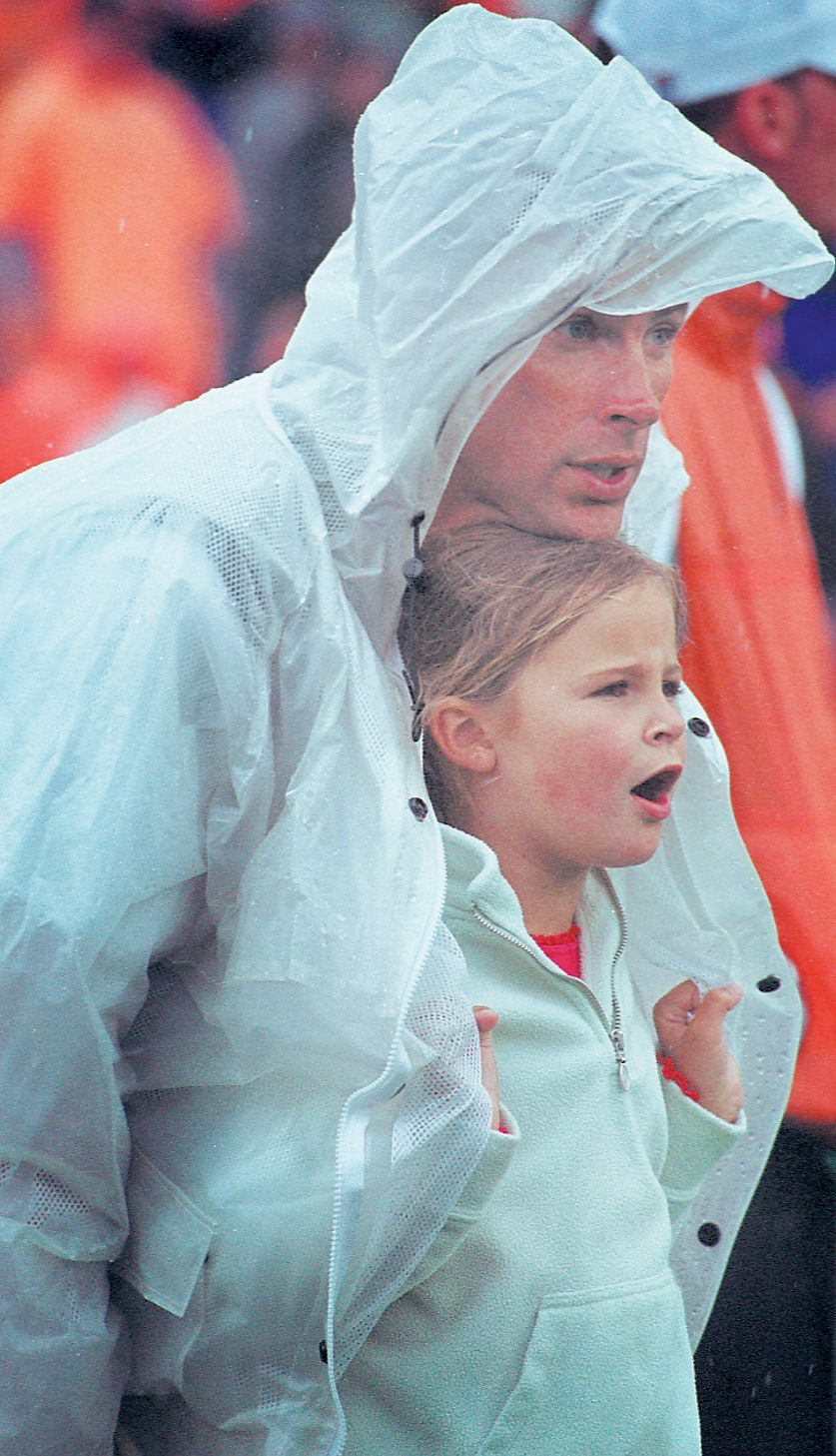 Mckenna Mikesell, 7, from Albany attempts to keep dry under the coat of her dad Rick during OSU's 21-19 win against Eastern Washington. The game and weather might have dampened the high hopes of the fans for a time. 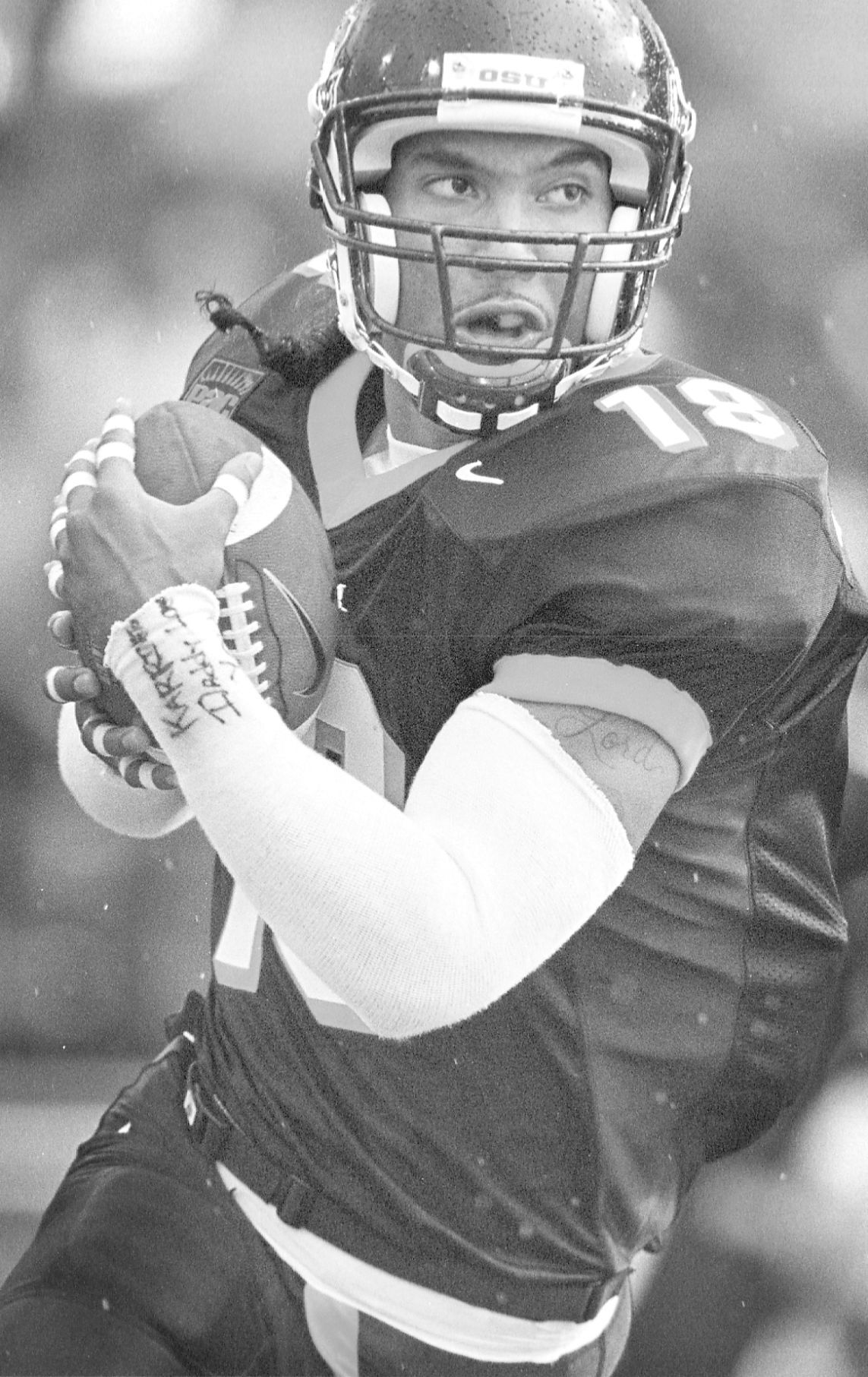 You can call college football Autumn Madness because when all is said and done the race to the Rose Bowl or any other postseason game is nothing more than an 11-game NCAA tournament.

Somewhere along the line there’s going to be a stinker or two, bit if you somehow prevail and keep moving forward even the stench of a rancid performance will disappear in a few weeks.

Just ask Stanford. After the Cardinal clinched the Pacific-10 Conference championship last November and earned their first trip to Pasadena in 28 seasons, do you think anyone on The Farm wasted any time commiserating about their hide-your-eyes, bury-your-heads setbacks to Texas and San Jose State?

So that, Beaver faithful, is my advice to you when some know-it-all gets in your face this week and lambastes you about “Oregon State’s so-called Rose Bowl contender” in the wake of Saturday’s 21-19 squeaker over Eastern Washington.

They’ll chortle and trot out all the old, tired jokes OSU diehards agonizingly endured for 28 consecutive seasons before the 1999 breakthrough.

They’ll ask how a team that barely staggered by an overachieving group from Cheney can even hope to compete with the Pac-10’s big boys.

They’ll term last season a one-hit wonder, a fluke, and predict a return to the basement.

Heck, even some of the players were wondering exactly what happened.

“I don’t know what it is about these I-AA teams,” slotback T.J. Houshmandzadeh said, shaking his head. “I don’t know if we underestimated them, or what.”

EWU played with emotion; OSU went through the motions. The Eagles dictated the tempo, took away a significant part of OSU’s offense and generally hung around far longer than they had any right to, especially considering they were without four injured offensive starters.

“Maybe we fooled ourselves and thought we worked hard enough,” senior tight end Marty Maurer said. “Obviously we didn’t. That should not happen out there, and that won’t happen around here.”

OSU coach Dennis Erickson didn’t even try to affix a happy face to Saturday’s performance, and no one else tried to deny what was obvious to a hypnotized Reser Stadium gathering.

“It’s very disappointing,” he acknowledged with typical candor. Our schedule gets tougher and tougher and if we play like this in the Pac-10 we’re not going to win many games.

“I think we can be a good team, but we can’t afford to play like that.”

Sure it was awful. As quarterback Jonathan Smith readily admitted, he had a terrible day, and in Erickson’s offense when his position is ailing almost everyone else catches the bug.

Like most of you, I thought the Beavers’ days of struggling against even high-as-a-kite Division I-AA programs were long gone. Apparently they’re not, especially if OSU just decides to mail it in.

“My hat goes off to them, by far.” Maurer said. “I-AA school that had to take a 10-hour bus ride down here. They didn’t get to fly, they didn’t get pampered like the way we usually do, and they came down and played their hearts out.

“They weren’t intimidated by a Pac-10 team.”

And when you throw in a November-like rainstorm, such games are just plain miserable to endure, even if you’re high and dry in the press box.

But remember, win and advance.

Erickson began his fifth decade on a college sideline Saturday. If anything has been drilled into his head since he started this coach-for-pay gig at Fresno State in 1969, it’s that the ultimate objective is to leave the stadium with at least one more point than the other guys.

Or two more, in this case.

Coaches with too many feel-good losses eventually get fired and become TV analysts. Those with a lot of wins stay employed and get second-guessed by those analysts they kept beating.

When Erickson finally drove home on Saturday, he probably felt a lot better than R.C. Slocum, Mike DuBose, as well as Paul Wulff and Tom Cable, his two ex-players who each lost their head coaching debuts on Saturday.

He came to work this morning undefeated. They didn’t.

Any Beaver fan who starts whining about the margin of victory has a pretty darn short memory, in my opinion. If you’ve been around here since 1970 or so, you’d better realize that you don’t dare play catch-and-release with a football victory, no matter how hideous.

“The locker room after the game was pretty intense,” Maurer said. “Everybody realizes what happened.

“We know what we have to get done. If we come out and handle our business and play like we’re capable of, we should win every game. If we don’t, if we shoot ourselves in the foot, we’re in trouble.”

Last spring in the NCAA men’s basketball tournament, Florida needed a miracle buzzer-beater by Mike Miller to beat underdog, overmatched Butler by one point in the first round. The Gators eventually made it to the national championship game; by then their near-pratfall was ancient history.

They took it away.

Oregon State tight end Marty Mauer carries the ball against Eastern Washington in the 2000 season-opener. The Beavers managed a 21-19 win to start 1-0. Mauer finished with five catches for 61 yards.

Mckenna Mikesell, 7, from Albany attempts to keep dry under the coat of her dad Rick during OSU's 21-19 win against Eastern Washington. The game and weather might have dampened the high hopes of the fans for a time.