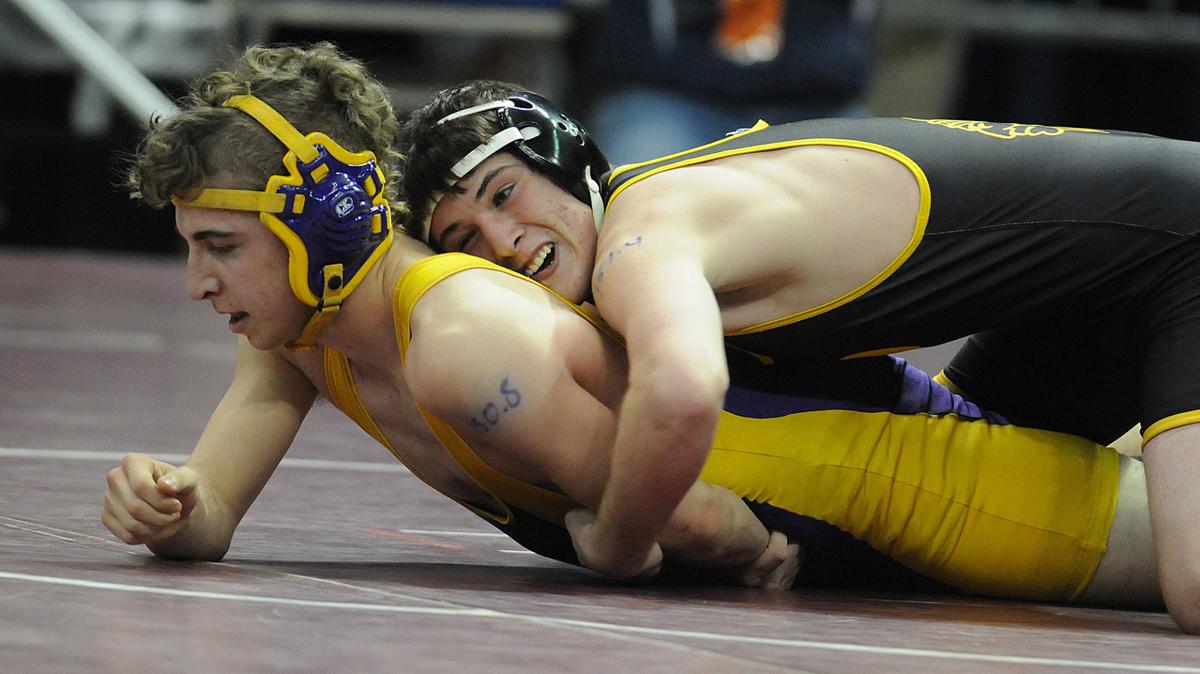 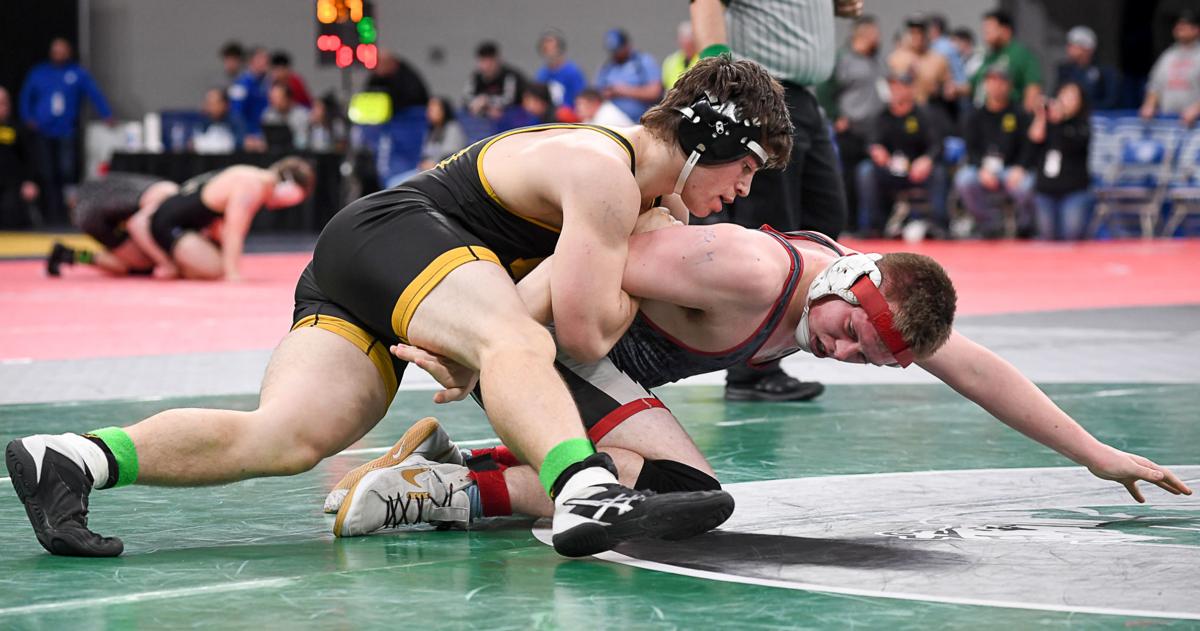 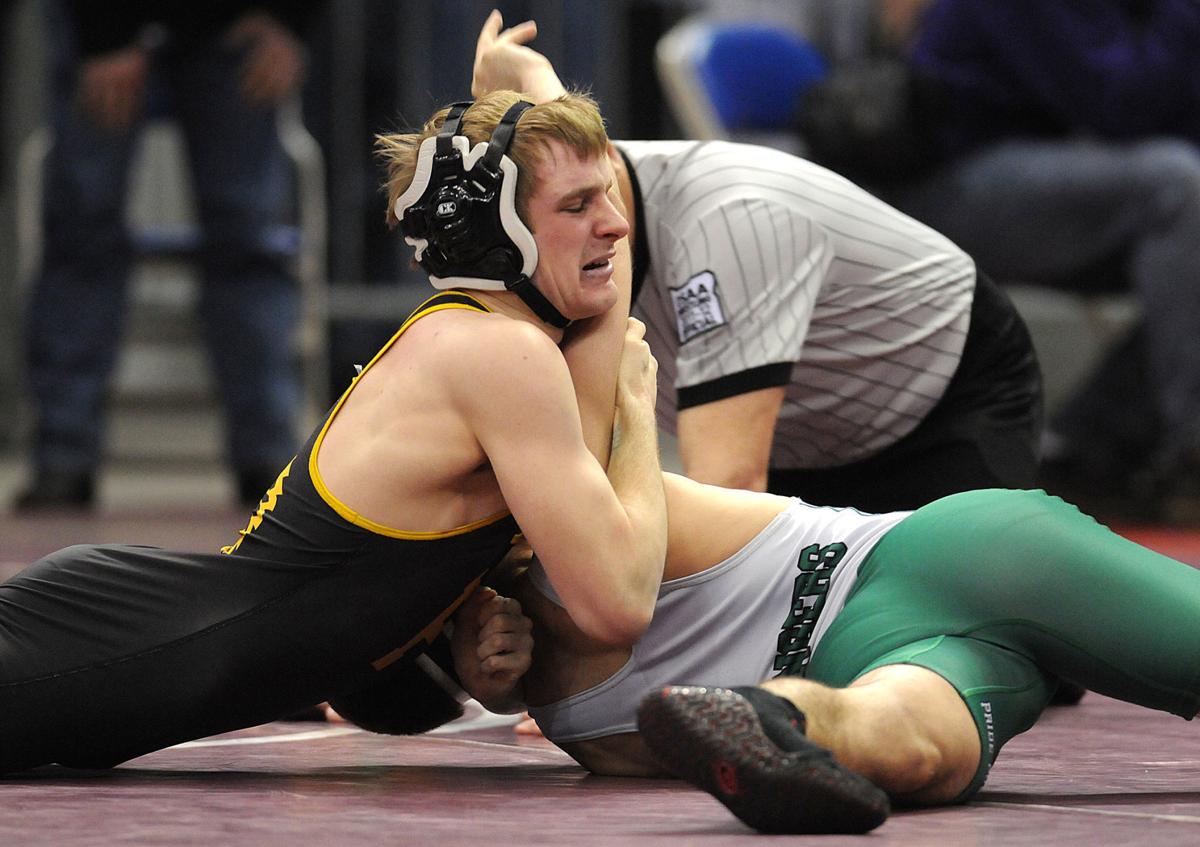 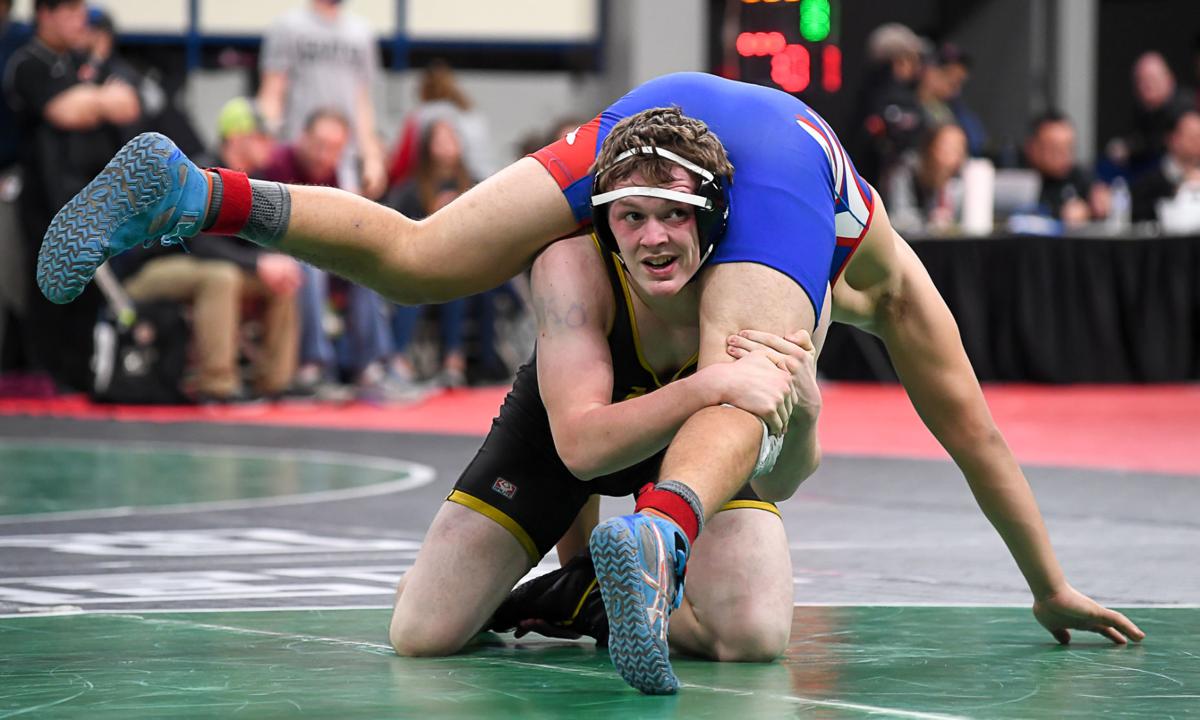 Connar Kohn has 93 wins through his first three seasons with the Warriors. He's on the all-decade first team at 220. 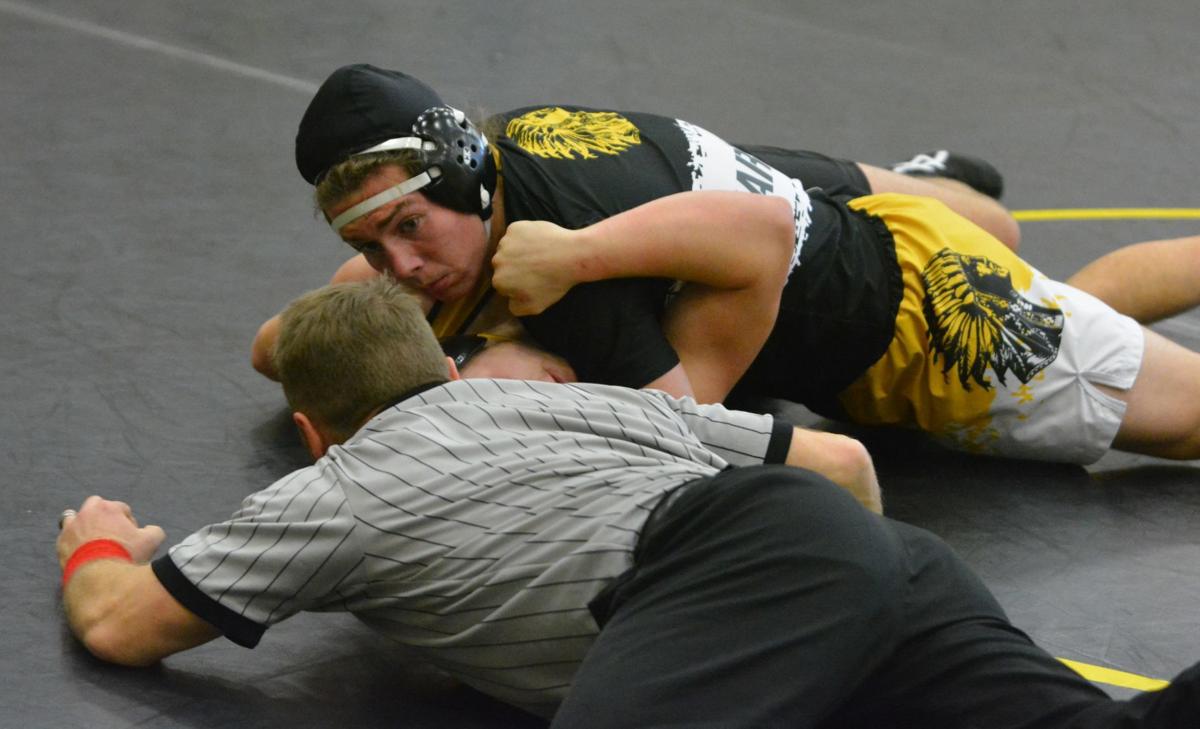 Brooks Stearns gets in position for a pin during a 2019 match. Stearns had 42 wins and placed fifth at state as a senior. 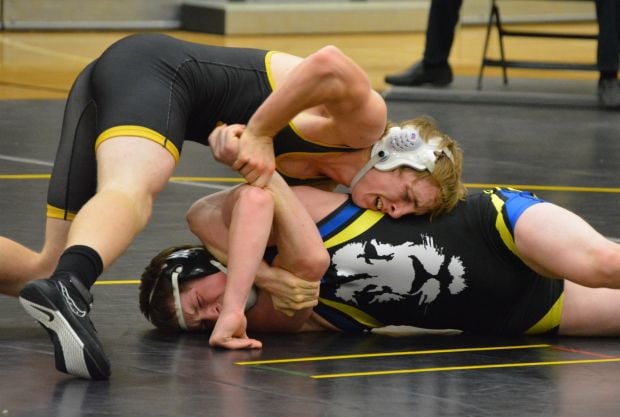 Nate Burkus took fifth at the 2015 state tournament for the Warriors. 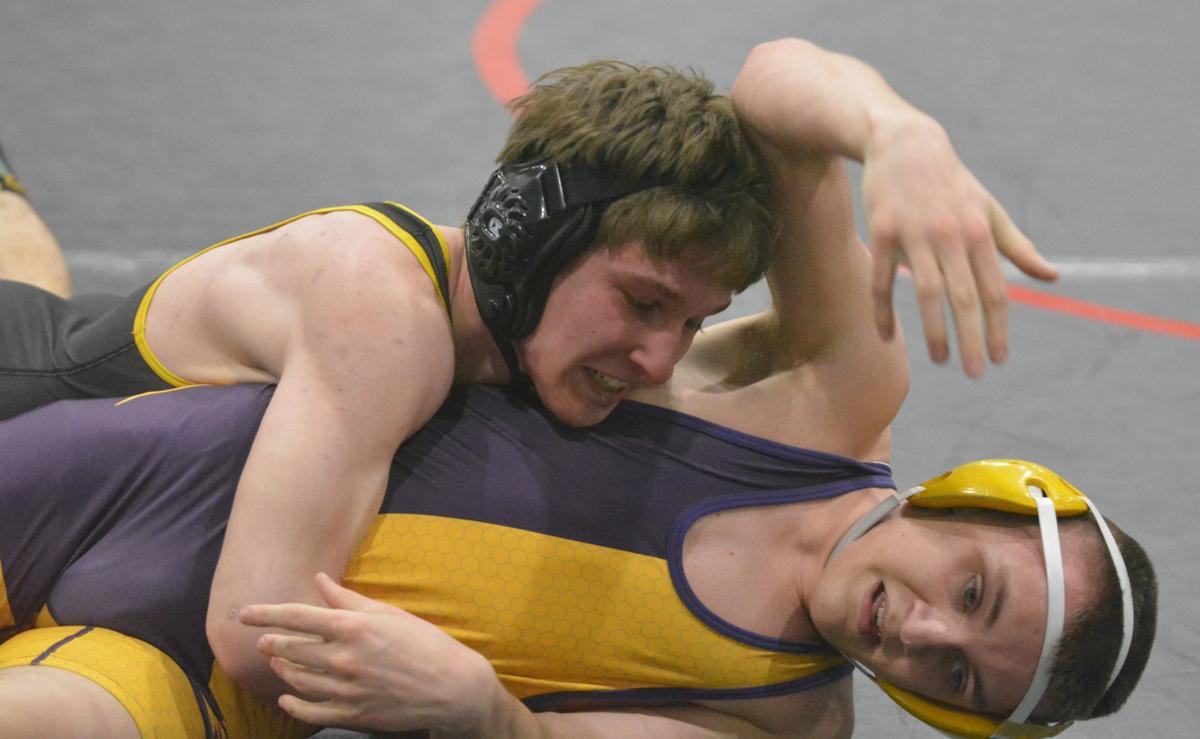 Tony Rath placed sixth at state in 2018 after fighting back through the consolation bracket. 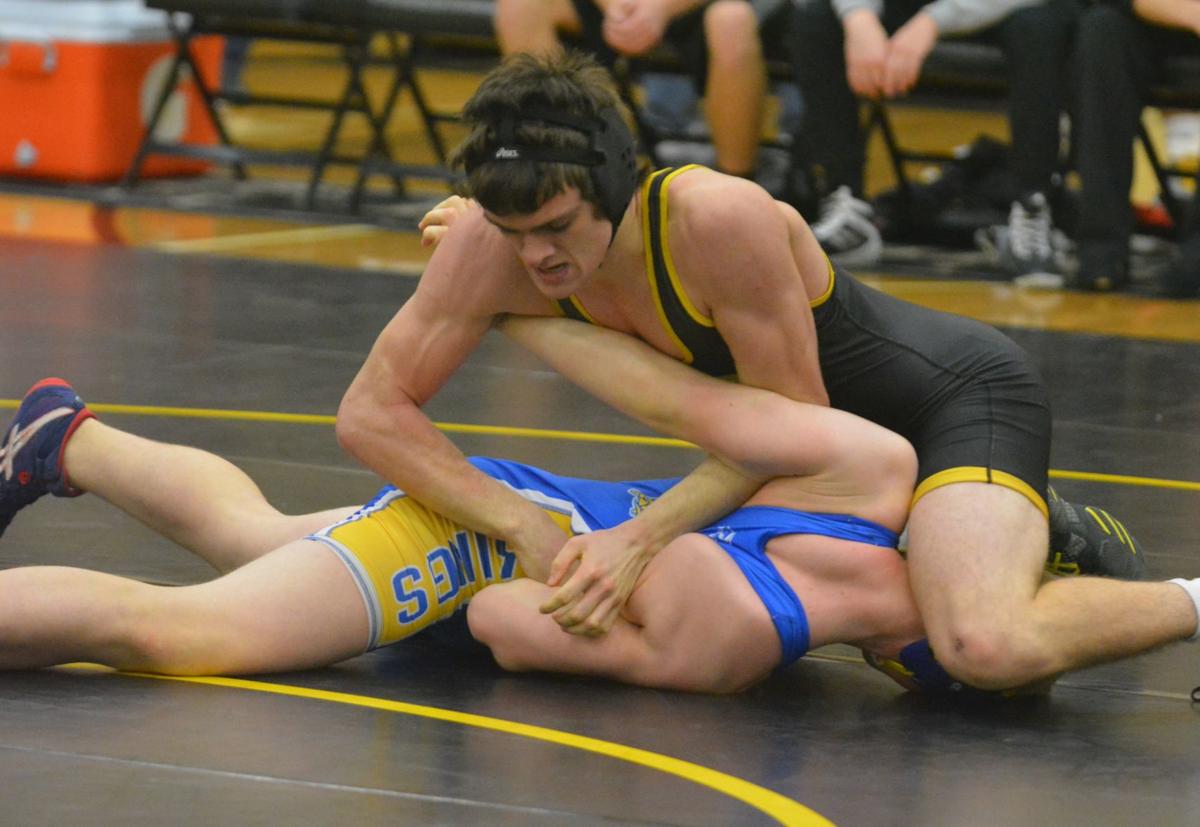 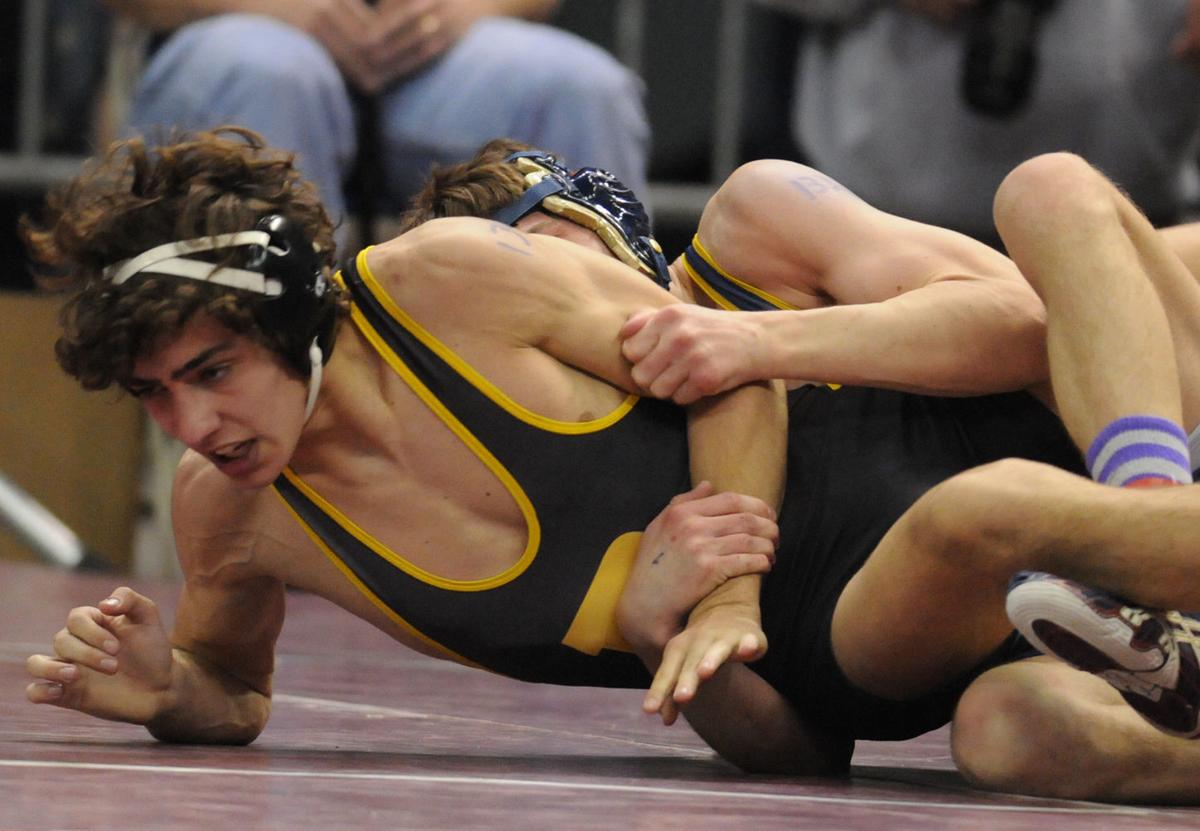 Zach Leonard won matches at state during his junior and senior years. 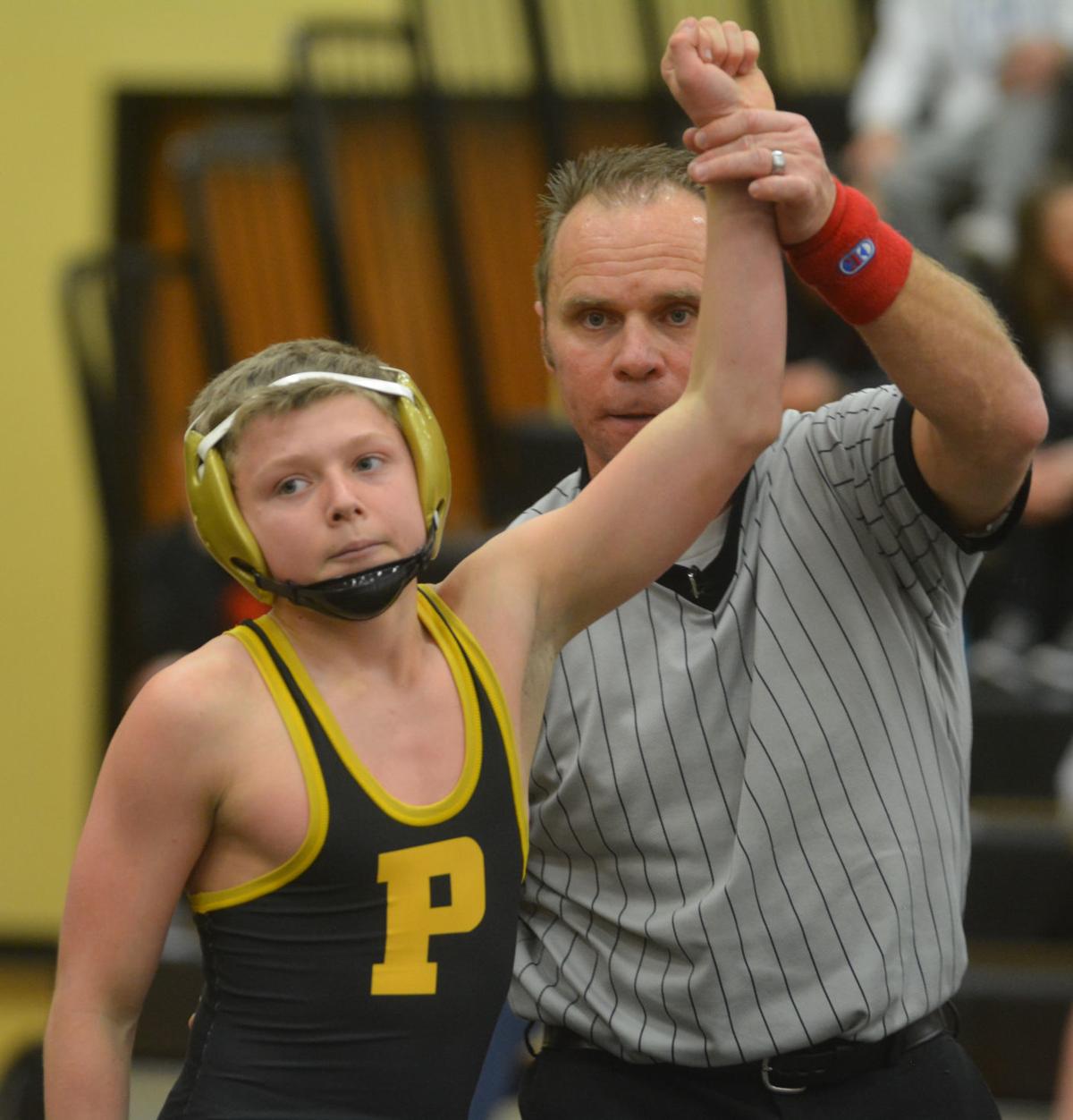 Blake Niemann gets the nod for the all-decade first team at 106 pounds. 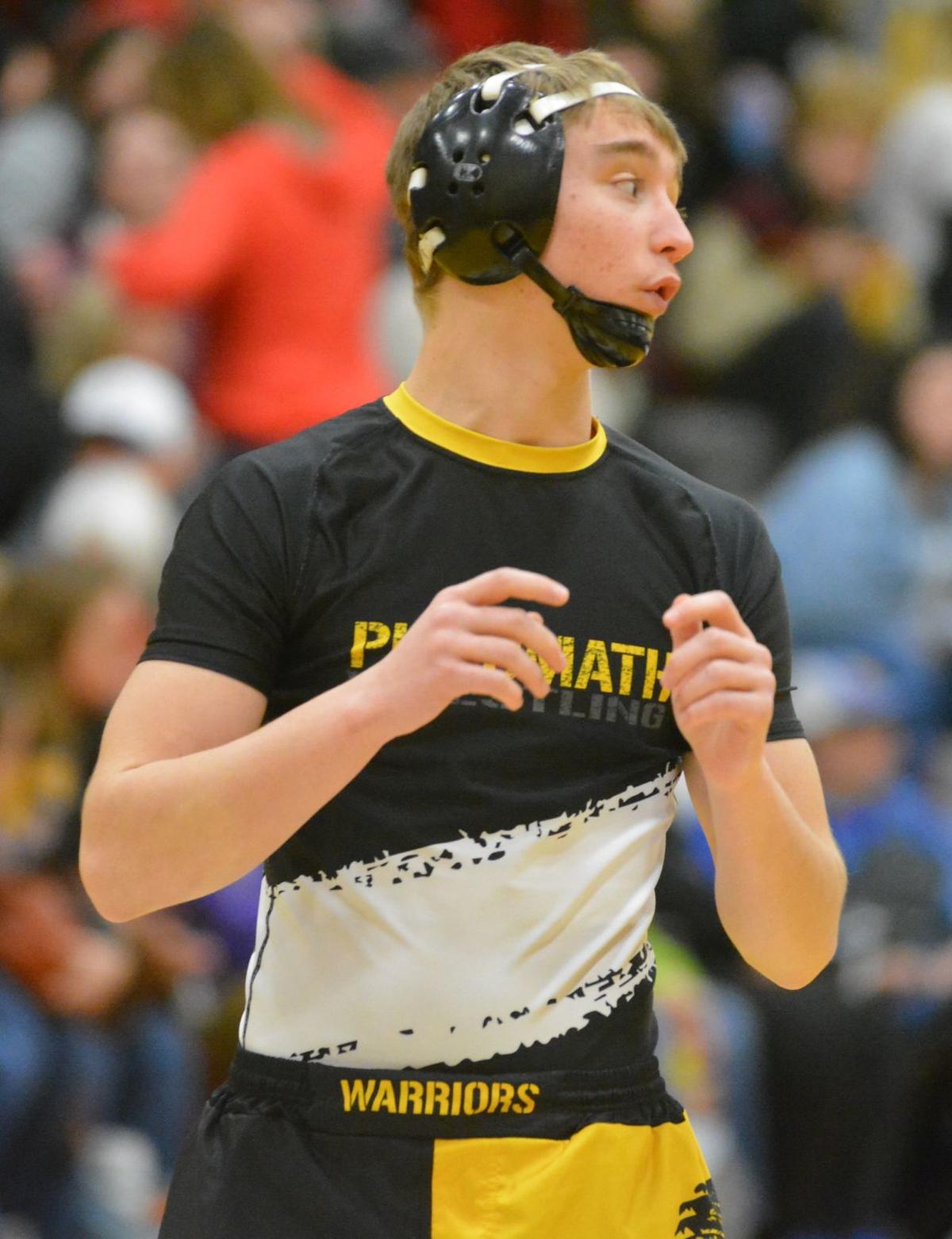 Hunter McCaskill competed at several weights during his four years but makes the all-decade list at 113. 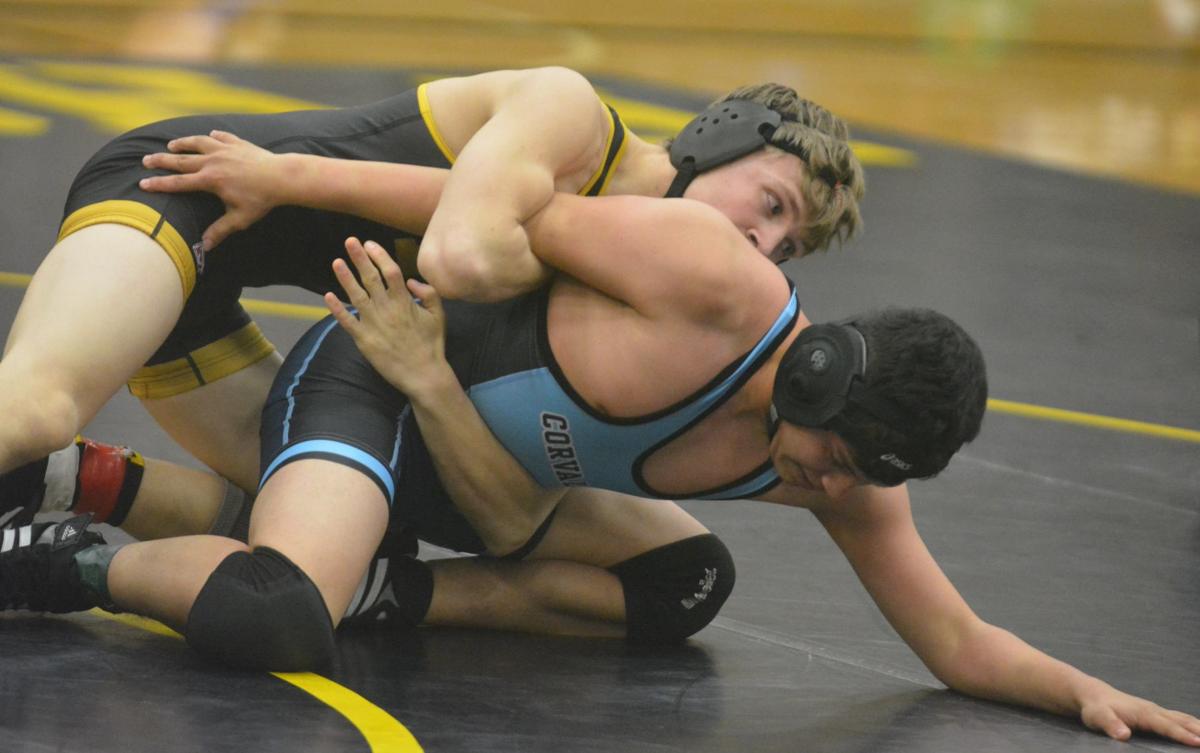 Keltin Benson won 101 matches in his four years with the Warriors. 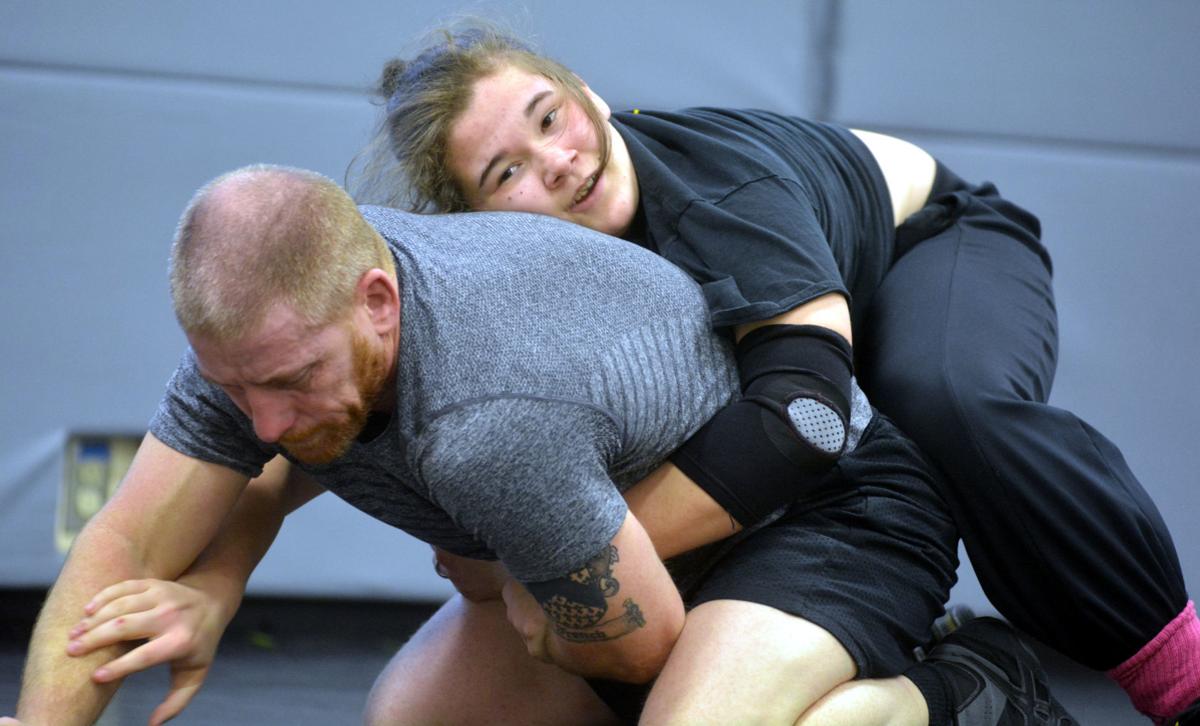 The goal is to make it up onto Philomath High’s "Dale Mosbaugh Wall of Champions" in the wrestling room.

The list has grown over the years and several names were added during the past decade with Warriors that placed in state tournaments. Based on state wrestling tournament results from the 2010-11 season through the 2019-20 season, 12 Philomath wrestlers earned 13 medals while in the spotlight in Portland.

From a team standpoint, the Warriors had their strongest showings at state to begin the decade and to end the decade. This past February, the Warriors scored 60 points and tied for 11th just 3.5 points out of a top-10 finish. In 2010-11, Philomath was ninth in the team race with 56 points.

To come up with first and second all-decade wrestling teams, a list of all PHS state qualifiers from the past 10 seasons was compiled. Their performances at state and season records were considered. As you might imagine, some wrestlers made it to state competing in different weight classes as they progressed through high school. A lot of emphasis was placed on Troy Woosley’s input to come up with the first and second teams since he coached and worked with all of these athletes.

Here’s a look at the first team:

106—Blake Niemann (2018-20): Through his first two years of high school wrestling, Niemann has already won 58 matches and earned a victory at the state tournament. Last season, he went 35-9, including a memorable 9-7 win in the consolation semis at districts. Niemann still has two years of eligibility remaining for the Warriors.

113—Hunter McCaskill (2015-19): McCaskill qualified for state in 2015-16 as a freshman at 106 pounds and finished 29-12 for the season. He also saw some time at 113 and makes the first team at that weight. Through his four years with the Warriors, McCaskill was a steady competitor and finished with 84 victories.

120—Keltin Benson (2014-18): Benson earns his way onto the all-decade team as a Warrior who steadily improved with each passing season and made it to state as a senior. Benson won 101 matches in his four years.

126—Tony Rath (2014-18): Rath was another wrestler who came on strong as an upperclassman, winning at a 70% rate through his junior and senior seasons. At the state tournament as a senior, he won three matches — all on hard-fought decisions — and placed sixth.

132—Zach Leonard (2008-12): Leonard’s junior and senior seasons occurred during the past decade and he gets the first-team spot at 132. Leonard won matches at state both of his final two seasons. In 2011, he made it the quarterfinals at 125 and finished 2-2.

138—Zach Trask (2009-12): Entering the wrestling program as a sophomore, Trask had a memorable state tournament in 2012 with a third-place finish. Trask qualified for state with third place at districts and then had an exceptional showing at state, defeating a Crook County opponent in his medal match.

145—Mikael Hill (2008-12): Hill earned the distinction of being the only Philomath wrestler to medal twice at state in the past 10 years. Hill placed third at 140 in 2011 and fourth at 152 in 2012. During his junior year, Hill beat Sweet Home’s Kyle Hummer, 8-6, for the district title and followed that up by winning five of six bouts at state, including a 5-1 decision over Yamhill-Carlton’s Steven Groce for third. Blaise Pindell, who placed fourth at state last year, goes on the second team.

152—Joey Howell (2014-18): Howell won 124 matches during his four years with the Warriors, which included a 71-16 record combined for his junior and senior seasons. Howell earned a sixth-place medal at state during his senior season, qualifying at 152 after competing at 160 for most of that season. Jacob Morris, who competed from 2012-16 and won 88 matches over his final three seasons, was close but has to go on the second team.

160—Braydon Calder (2008-12): Calder had a winning record (5-4) for his junior and senior appearances at state. As a junior during the 2010-11 season, he placed fourth at this weight with three wins. A multi-sport athlete, Calder went on to play college soccer. Matt Trask (2009-12) was strongly considered but is on the second team.

170—Nate Burkus (2011-15): Burkus ended Philomath’s three-year medal drought at state by taking fifth in 2015 — that performance coming at 160. During his final two seasons with the Warriors, Burkus had a combined record of 62-22. Taylor Kohn (2012-16) just misses the first team at this very competitive weight but should be mentioned for his 41-7 season and sixth-place medal at state in 2015-16.

182—Brooks Stearns (2017-19): Stearns wrestled just two years in the program but definitely left his mark with a 64-21 record — 42 of those wins coming as a senior. As a junior, Stearns was having a good season at 22-9 and likely was on his way to state before suffering a season-ending shoulder injury. As a senior, he started the season at 220, qualified at 182 and placed fifth.

195—Issiah Blackburn (2017-20): Blackburn became one of three Philomath wrestlers in the 2010-11 to 2019-20 period to finish as high as third at state. Blackburn won four of five matches in Portland and defeated teammate Connar Kohn in the third-place match. Blackburn will head into his senior season with 76 wins over his first three years. Charlie Stouder, who placed fourth at 189 in 2011, was also in the conversation at this weight and is on the second team.

220—Connar Kohn (2017-20): Kohn is another wrestler off last season’s squad that earned a medal with a fourth-place finish to cap his junior campaign. Kohn also qualified for state as a freshman. Through his first three years with the Warriors, Kohn has racked up 93 wins.

285—Lucas Sinclair (2010-14): Sinclair gets the heavyweight spot based on what he accomplished as a senior in 2013-14. That season, he finished 32-7 and earned a victory at state with a first-round pin over a Ridgeview opponent.

Girls—Reynece Ryan (2018-20): Ryan is the only female wrestler to ever compete at state for the Warriors with the sport only sanctioned by the OSAA two years ago. Just a sophomore, Ryan went 21-6 last season and won a match at state with a pin in 50 seconds over a Warrenton opponent. Before girls wrestling became an official sport in Oregon, Marissa Loyd had a good season in 2016-17 and is on the second team.

This is the seventh in a series of all-decade stories as selected by the Philomath Express. The period covers teams that competed from the 2010-11 through 2019-20 academic years. The compilation of the all-decade teams are for entertainment purposes only.

The Philomath High School tennis program has come a long way since its transition in 2006 from club sport to OSAA-sanctioned status. Over the …

Logistics too challenging for PYAC to be able to offer baseball, softball this summer

The Philomath Youth Activities Club’s executive director, Eddie Van Vlack, was holding on to the hope that at least T-Ball and Mites participa…

Philomath High’s softball program has evolved into one of the best in all of Class 4A over the past few seasons.

Connar Kohn has 93 wins through his first three seasons with the Warriors. He's on the all-decade first team at 220.

Brooks Stearns gets in position for a pin during a 2019 match. Stearns had 42 wins and placed fifth at state as a senior.

Nate Burkus took fifth at the 2015 state tournament for the Warriors.

Tony Rath placed sixth at state in 2018 after fighting back through the consolation bracket.

Zach Leonard won matches at state during his junior and senior years.

Blake Niemann gets the nod for the all-decade first team at 106 pounds.

Hunter McCaskill competed at several weights during his four years but makes the all-decade list at 113.

Keltin Benson won 101 matches in his four years with the Warriors.