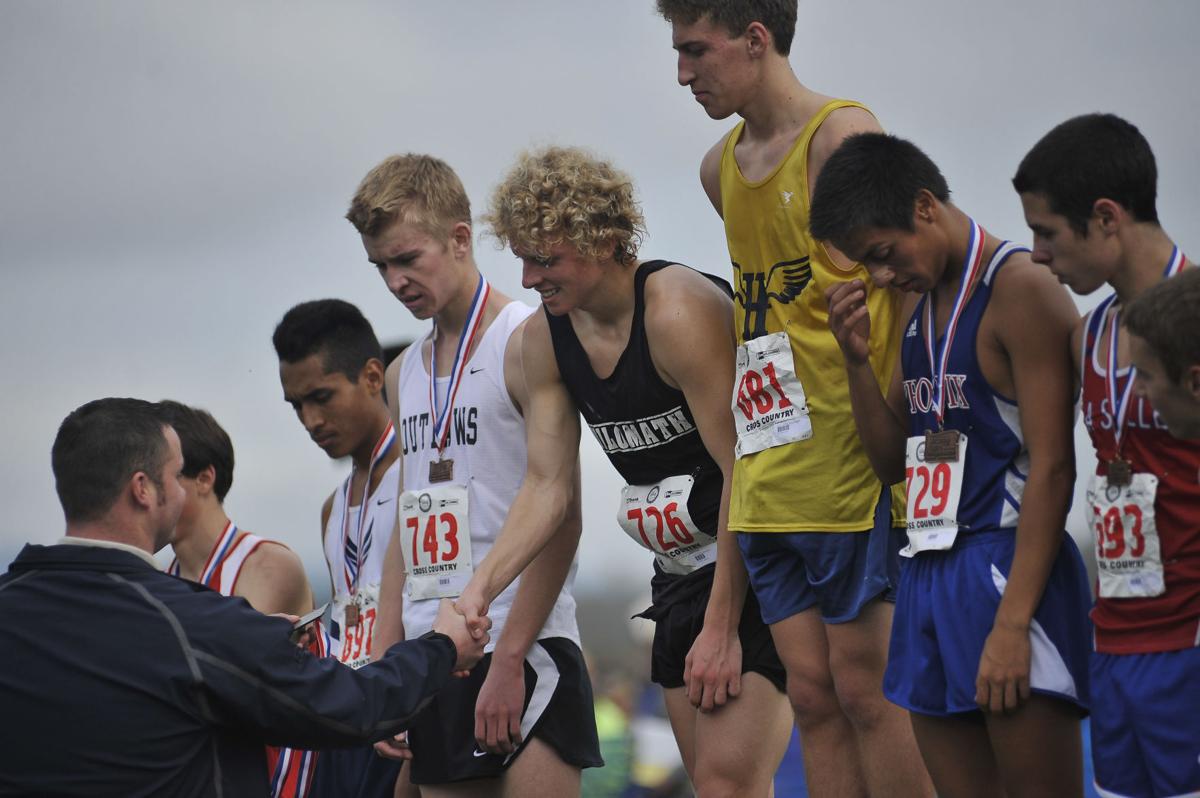 Philomath's Josh Seekatz placed second individually at the 2010 state cross-country meet during a championship season for the Warriors. 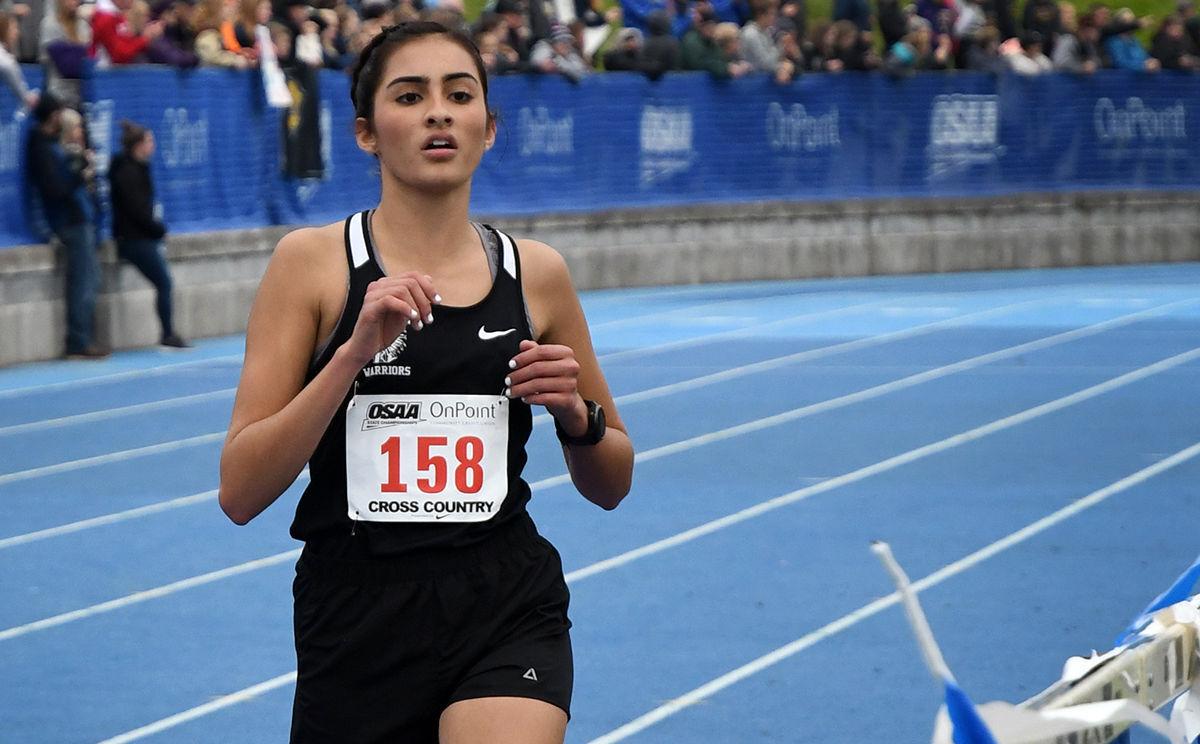 Hannah Hernandez wrapped up a memorable four-year run with the Warriors this past fall. 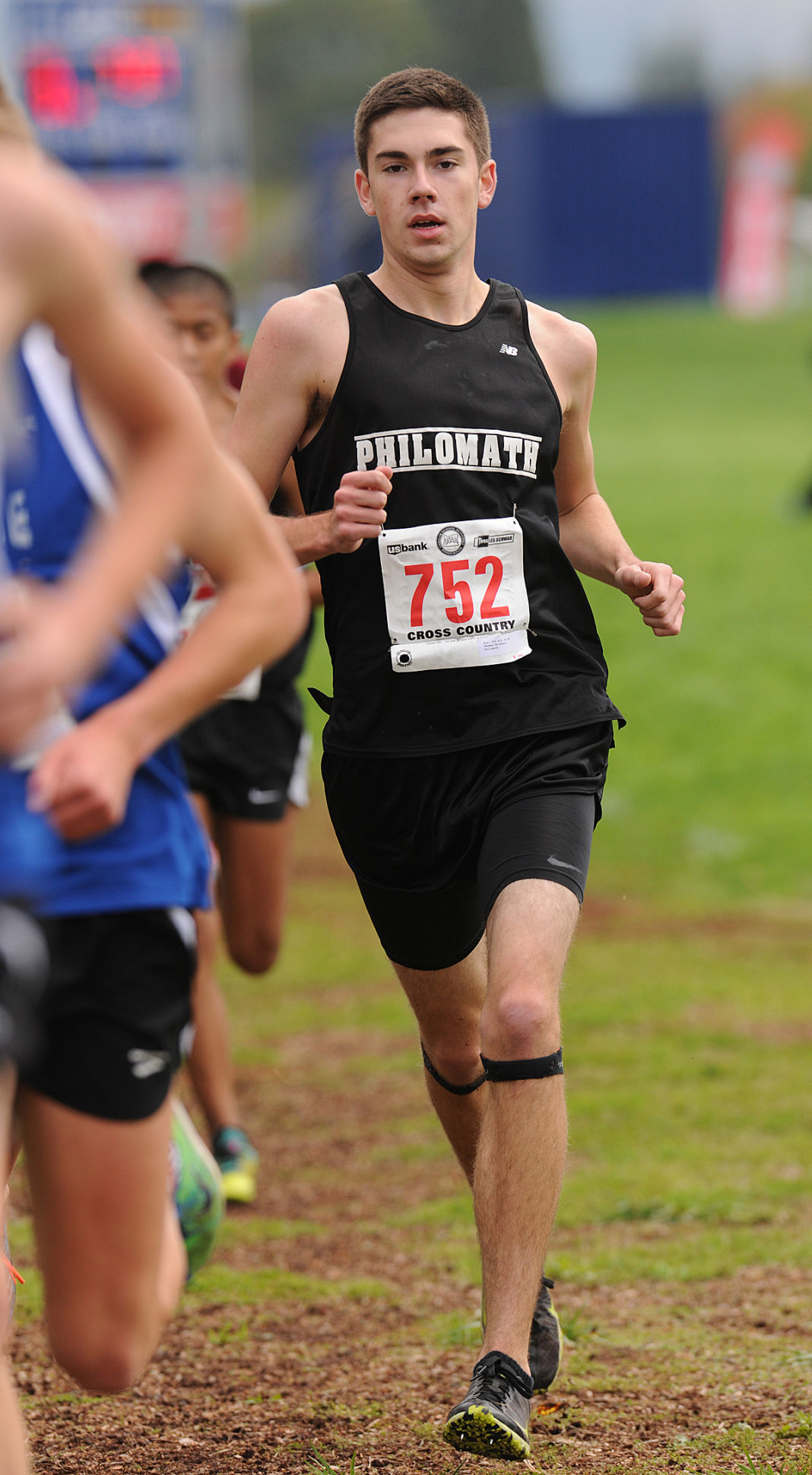 Philomath's Mitchell Thomas competes at the 2014 state cross-country meet, placing eighth and helping the team to a fourth-place trophy. 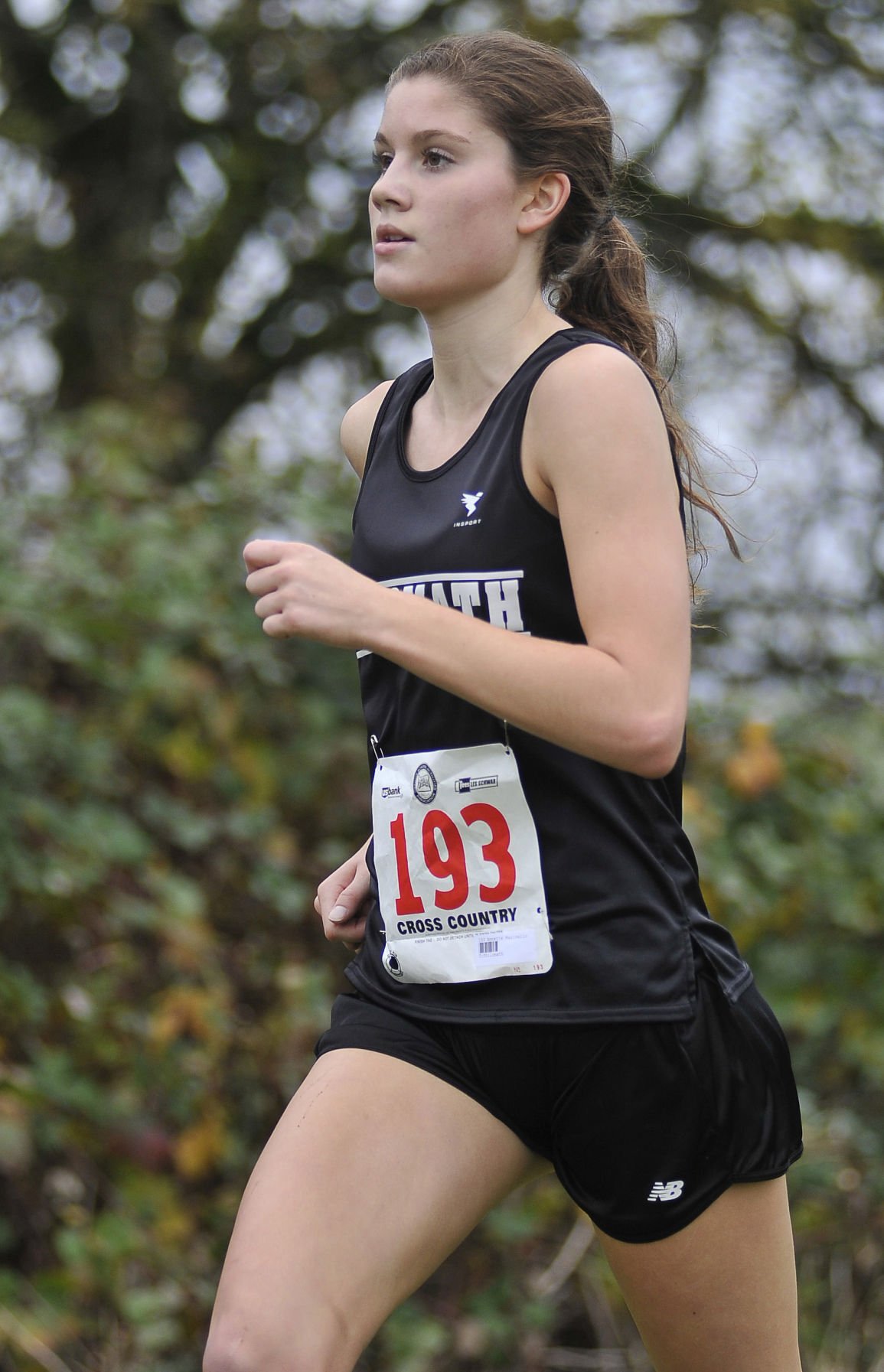 Annie Marinello placed seventh during her senior season at the 2010 state cross-country. 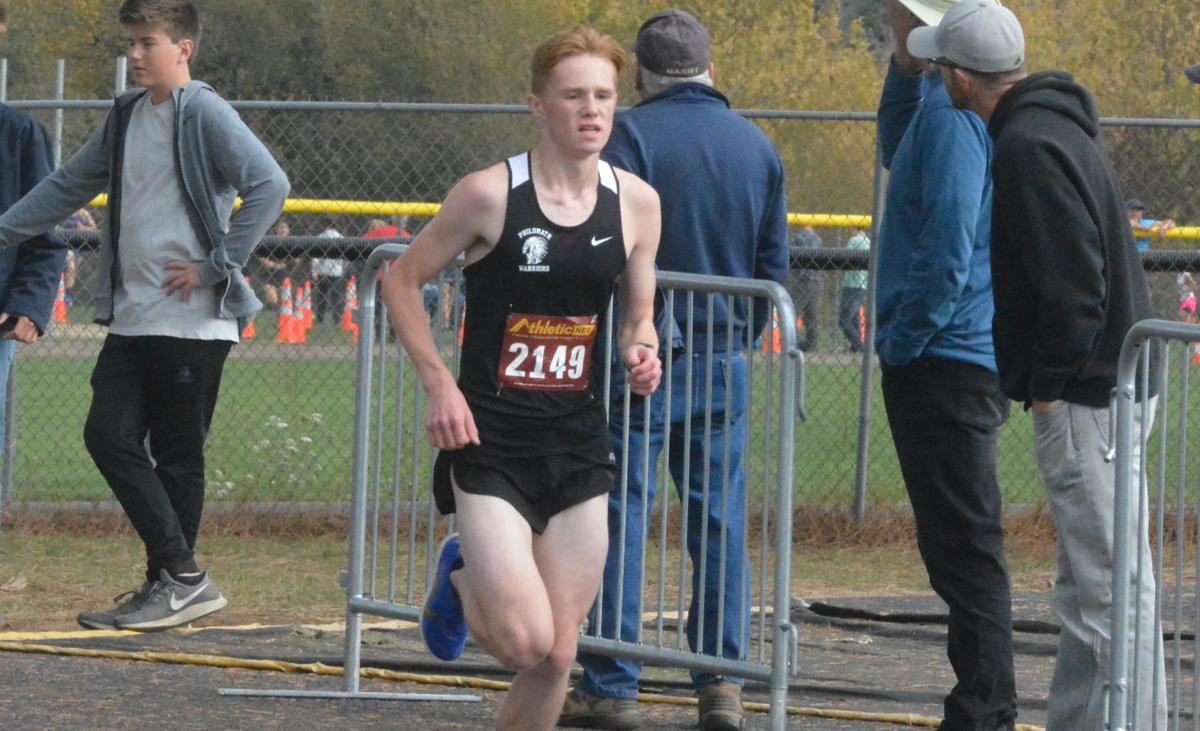 Brody Bushnell makes the all-decade team with only a freshman season under his belt. 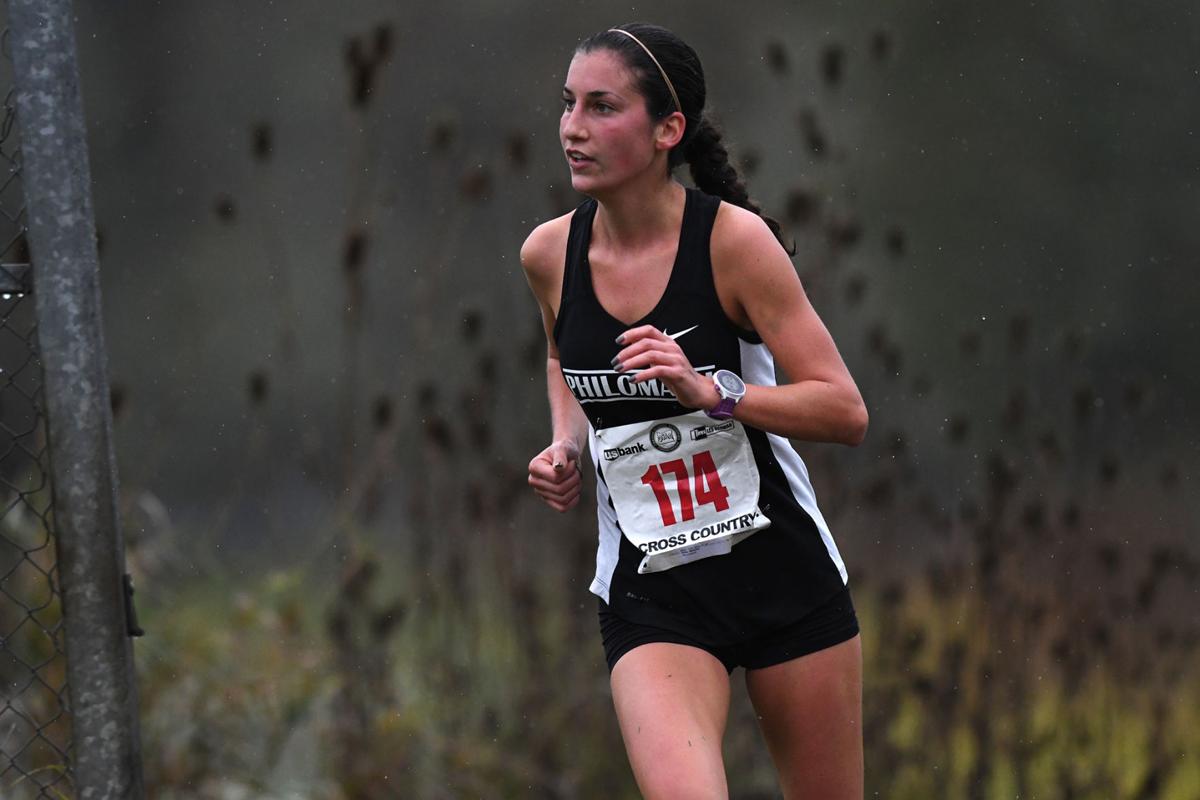 Philomath High School’s cross-country program ranks as one of the most consistent winners among all sports in any classification. Coach Joe Fulton’s teams churn out quality runners year after year. It’s pretty much a given each season that the Warriors will somehow factor into the 4A picture.

This past decade, the school had several quality runners that rank among the best in Philomath High’s history. One of the sweetest moments for the program occurred just this past fall when the boys surprised a few by winning the state championship.

The 2019 runners seemed to be on a mission with a more serious approach and harder workouts that all paid off in the end. Brody Bushnell, Brody Gerig, Grant Hellesto, Justin Enghauser and Sean Cummings were the top five runners on the squad. Bushnell, only a freshman, placed ninth individually. Noah King and Levi Knutson were in the No. 6 and No. 7 positions.

It was the Philomath boys’ second state title of the decade. The Warriors started out the 2010s just as they had finished — with the 4A title. The 2010 squad took first with Josh Seekatz, Jeff Schreiner-McGraw, Boone McCoy-Crisp, Zach Trask and Julio Alvarado filling the top five positions. Chase Celorie and Alex Munsee were in the final two spots.

Which of those two teams deserves the title of the decade’s best? There are arguments both ways with the 2010 team’s Seeketz leading the way with a runner-up finish among the individuals. But if you look at the two squads from top to bottom, the 2019 team probably has the edge with a bit more depth.

But beyond the teams, how do all of the individuals stack up over the past 10 years?

To kick off a series of all-decade teams in each sport, the Philomath Express this week takes a look at boys and girls cross-country. Seven-athlete first teams were chosen for each with seven more on a second team.

The Philomath High boys had three top-four finishes at the state meet during the 2010s. Besides the already-mentioned state title teams of 2010 and 2019, the Warriors finished fourth in 2014. That squad featured Mitchell Thomas, Tim McIlroy, Andrew Damitio, Clay Youker, Kurt Foster, Clark Hellesto and Marcus Weaver.

As mentioned, Seekatz placed runner-up individually at the 2010 state meet and helped the Warriors to the team title. He came in with a time of 16:21. Earlier in the season, he had his all-time best time of 15:54, that coming at the Country Fair Classic in Veneta.

“So finally it’s all come together, we have all the guys we needed to do it and it just feels great,” Seektaz said after the Warriors won the 2010 state title. “It’s so rewarding because we’ve been working at this definitely for years.”

At the time, it was the first state title for the PHS boys since 2003.

Thomas was a consistent performer for the Warriors over his four seasons from 2011 to 2014. During his junior year in 2013, Thomas ran his fastest-ever 5K in high school with a 16:28.9 at the Oregon West Conference Championships. The following season as a senior, he won the district meet and placed eighth at state. His finish helped the Warriors win the fourth-place trophy in 2014.

“I’m a senior, it’s my last race. So I came and just gave it my all. And it paid off,” Thomas said after his final cross-country race in high school. “We’ve been working for this trophy for a long time, and it feels so good to finally come out here and leave with one in our hands.”

Arriving on the high school running scene with a bang in 2019, Bushnell, a freshman, placed ninth in his first-ever state meet with a time of 16:20.20.

“We wanted to stay together for most of the race and then try to have a good kick and get in as many people as we can,” Bushnell said in reference to the running-in-a-group strategy worked for the state title. “(I wanted) to stay with the team and keep guys I wanted to beat in sight so I could always try to outkick them at the end.”

Bushnell’s PR already ranks him No. 3 on the school’s all-tine list for 5,000 meters.

“If you watched him race, you wouldn’t predict it,” Fulton said in 2012. “He rocks. He’s kind of aggressive. He’s so gutsy and he hates losing, so consequently, he’s been beating guys who probably have a little more natural ability than he has.”

Schreiner-McGraw was part of the 2010 state championship team as a senior, placing 20th individually in 17:04. He had a PR of 16:31 at the Country Fair Classic in Veneta. He had been competing with the Warriors since 2007. Schreiner-McGraw was a strong 800 runner in track. Before the 2010 state track meet, Fulton said about him in an interview, “He’s the kid in the race with the best leg speed, s he’s capable of staying up there with Josh (Seeketz) and other top runners.”

Gerig just completed a four-year run with the program in 2019 and was a key part of the state title team. Gerig provided the Warriors with a big boost midway through last season after sitting out early meets while continuing a comeback from a stress fracture in his tibia. He placed 15th at state last year with his best-ever 5K time, a 16:24.0 that ranks him sixth-best all-time in the PHS record book.

Another member of the 2019 championship team, Hellesto, who is a junior, placed 16th in Eugene last fall with a PR time of 16:24.1 while running with Gerig. Hellesto has been running with the varsity since his freshman year and appears to have a habit of finishing seasons very strong. Until his performance last fall at state, his previous PR had been as a sophomore with a 16:40.6 at the district meet.

Hernandez completed a memorable four-year run through the PHS program this past fall. She won the Oregon West Conference’s individual title four straight years (2016-19) and has been a primary contributor to several team trophies, including two third-place finishes at state during her freshman and senior seasons.

Hernandez had the top time of any PHS girl during the 2010s with an 18:17.9 in 2018 when she was a junior. That came in an invitational at Champoeg State Park. Hernandez plans to attend Oregon State University and continue to develop her cross-country abilities at the next level with the Beavers.

Marinello came to Philomath prior to the 2009-10 season as a transfer from Corvallis High. She placed seventh individually at the 2010 state cross-country meet. A senior that season, she came in with a time of 20:03.

“I wanted to stay pretty strong throughout and try to finish strong,” Marinello said after the 2010 state meet. “I could have finished a little stronger but I had a nice kick, which was great because it got me to first-team all-state, which is something I’ve never done before.”

Alba had a solid four-year run from 2013-16 with three top-16 finishes at the state meet. Her top season came when she was a sophomore in 2014. Alba, who was a two-sport fall athlete as part of the soccer team, ran her personal-best time of 19:08 at the Country Fair Classic, won her only Oregon West Conference title by a margin of 26 seconds and had her highest finish at state with 10th in 19:40.

“I definitely feel them the whole way, but it kind of turns into adrenaline once the race starts,” Alba, who today competes at the University of Vermont, said after her 2014 finish.

Sheeder’s cross-country career at Philomath High got off to a great start and by the time she was a sophomore, she had placed third at the Oregon West Conference meet with a personal-best time of 19:34 (third-best in the decade). She continued to be one of the team’s top runners in 2014 but an injury prevented her from competing at the state meet that fall. Sheeder didn’t compete in the sport at all as a senior because of injury.

Hellesto is just getting started with her PHS career with a stellar freshman season. In one of the most remarkable seasons ever in terms of improvement, she started the 2019 season with a 78th-place finish and time of 25:06 in the Northwest Classic. By the time she was running at state, Hellesto had broken 20 minutes with a PR time of 19:54.6 — which ranks her among the top 10 in the school records list.

Bushnell wrapped up her four years with the program this past fall. She competed at state all four years and ran her best-ever time in 2018 as a junior with a 20:10.6 for seventh at the Oregon West meet.

Nuno also wrapped up her cross-country career this past fall after spending three years with the program. A transfer into PHS before her sophomore season, Nuno had an immediate impact. She had her best-ever time in her final appearance with the Warriors — a 20:08.5 at the 2019 state championships.

This story originally appeared in the April 22, 2020, Philomath Express.

This is the first in a series of all-decade stories to appear in the coming weeks in the sports section. The period covers teams that competed from the 2010-11 through 2019-20 academic years.

The process to compile the all-decade teams begins with compiling a list of all-conference athletes and then reviewing published stories and available statistics, and when possible, receiving input from Philomath coaches. The compilation of the all-decade teams are for entertainment purposes only.

Philomath's Josh Seekatz placed second individually at the 2010 state cross-country meet during a championship season for the Warriors.

Hannah Hernandez wrapped up a memorable four-year run with the Warriors this past fall.

Philomath's Mitchell Thomas competes at the 2014 state cross-country meet, placing eighth and helping the team to a fourth-place trophy.

Annie Marinello placed seventh during her senior season at the 2010 state cross-country.

Brody Bushnell makes the all-decade team with only a freshman season under his belt.