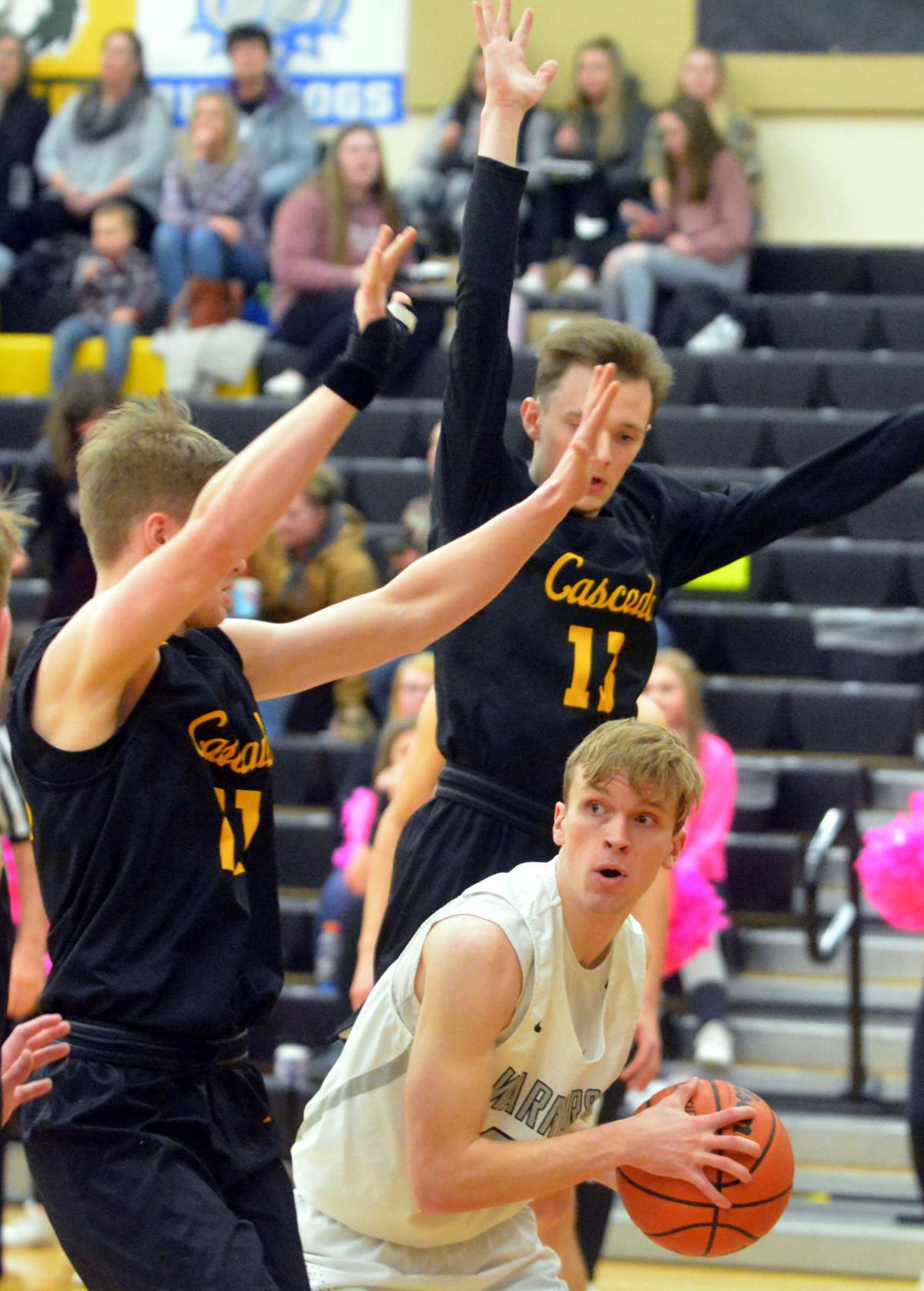 Dylan Bennett works underneath the hoop this past season for the PHS boys basketball team. Bennett was named PHS Male Athlete of the Year. 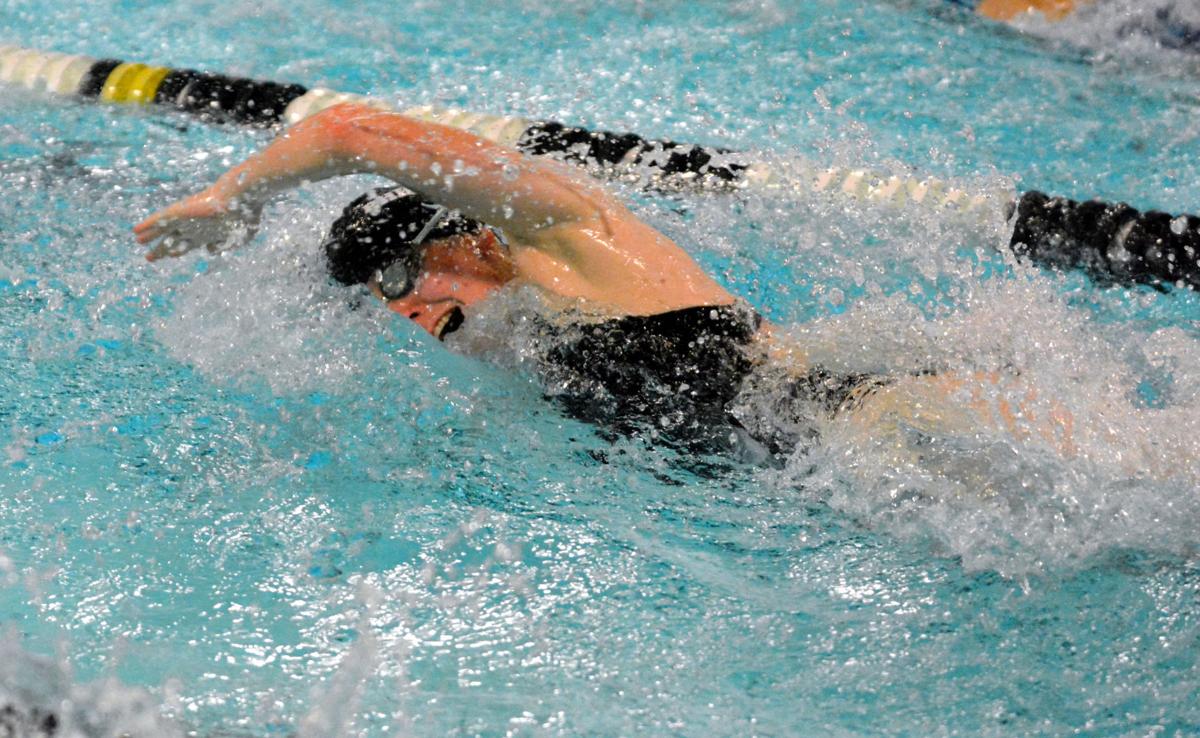 Maggie Ross focused on the 50 and 100 freestyle during her senior season with the PHS swim program.

Working hard inside to grab a rebound or sprinting forward in left field to snag a catch, Philomath High graduate Dylan Bennett certainly left his mark in athletics while wearing the Warrior colors.

During his senior year, Bennett ventured beyond the basketball court and baseball diamond and returned to a sport that he hadn’t participated in since he was a freshman — football.

“I played a lot better than I thought I would for sure,” said Bennett, who made several big catches as a wideout for the Warriors last fall. “Overall, it was a great experience.”

Ross is another athlete that will be remembered for years to come.

“I think there are sports that aren’t exactly as popular basketball or volleyball or baseball, so I was surprised that I got that award,” said Ross, who competed in track and field and swimming. “I was very honored.”

Athletic Director Tony Matta said the award recipients are selected based on a vote of PHS coaches.

Bennett went out for football last fall to have some fun but ended up as one of the top offensive and defensive players in the league. Bennett was an all-Oregon West Conference second-team selection at wide receiver and honorable mention at defensive back.

“Since I didn’t play my sophomore and junior year, I came out just because I wanted to do something for my senior year and hang out with my friends,” Bennett said. “I wasn’t expecting us to make a run at state or anything but I was hoping to have a fun time with it. My expectations were blown away; Despite our team not doing amazing, it was a fun year.”

Bennett’s previous experience in football when he was younger had mostly involved playing quarterback. But the prospect of playing receiver intrigued him.

“It’s more thought-provoking and you have to think things through more and know what everybody’s doing on the field,” Bennett said about playing QB. “Whereas at receiver, you’re just given a route — you run out there and if they throw you the ball, you have to catch it. I just had a lot more fun with it overall and it was a great experience for me.”

In the defensive backfield, Bennett played most of the time at safety.

Bennett’s primary sports, however, have been basketball and baseball — he competed in both all four years of high school.

The PHS basketball team had an exceptional season by winning the Oregon West Conference title, securing the postseason’s No. 2 seed and winning a first-round playoff game to advance to the state tournament.

“The season as a whole, the season was amazing,” he said. “It blew my expectations out of the water. I knew we were a good team; I knew the chemistry was there and everything but it was just cool to see everything come together.”

Asked about a favorite memory from his senior year, Bennett mentioned the win over Phoenix in the first round of state playoffs.

Concerns with limiting spread of the coronavirus became serious during the week of the state tournament and the season ended with no champion crowned.

“Obviously, the state playoffs did not go the way we expected,” Bennett said. “Just the atmosphere when we found out we weren’t going to be playing, everyone was so shocked. There’s nothing you can do about it and I think as a team, we handled it pretty well.

“It would’ve been cool to see what would’ve happened,” he added, “but I think overall, it was an awesome season.”

Bennett and his teammates then didn’t get to play baseball.

“I had similar feelings as basketball, it was just so out of my control that I tried to make the beset of things,” he said. “I don’t want to hang my head down on things I can’t control.”

Philomath High’s baseball team appeared to be among the top teams that would content for an Oregon West title.

“Last year’s season was awesome for baseball; we made a pretty good state run and it was just a fun year,” Bennett said. “But it’s not a really good way to end my baseball career. ... I’m pretty sure we would’ve been pretty good.”

Bennett plans to pursue a degree in engineering at Oregon State University. He’ll focus on academics and not compete in athletics other than intramurals.

Ross will be remembered as a sprinter in both track and swimming. Losing the 2020 season was rough for the girls’ track and field program with a serious shot at winning the state team title. Several individuals had realistic chances to win individual titles as well, including Ross in the sprints and as part of two relays.

“It was pretty rough for a while not being able to have that final season because that was my sport since before middle school,” Ross said. “I’ve been participating in track for a lot of years and it was supposed to be kind of my grand finale and I was expected to win some state championship titles. I was looking forward to the competition.”

Ross said as time went on, she realized “track isn’t the most important thing in the universe. Winning more medals wouldn’t change me as a person necessarily and I have a lot to be thankful for because my family is healthy and all of my friends are healthy.”

Ross said she enjoyed the atmosphere that the swimming program offered.

“My freshman and sophomore being an underclassman was weird as far as atmosphere went because I was kind of more scared and timid about everything,” Ross said. “But by junior year and senior year, it definitely became a great space with the team and everything.”

Ross focused on the 50- and 100-yard freestyle in her last years in the program.

“Originally I was a 100 butterflyer but by my senior season, I was pretty much dialed in to the 100 freestyle and the 50 freestyle,” she said. “I switched a little bit (between events) but I never branched out from those two strokes necessarily.”

One fortunate circumstance involving swim season was the timing of districts and state. The season ended before the pandemic cancellations occurred.

“When the girls basketball team and the boys basketball team found out they couldn’t attend state and couldn’t participate, I realized how lucky we were because we were done probably a month sooner than they were,” she said. “It felt pretty blessed to finish up our season.”

Ross competed at state in the 50 freestyle and as part of the 400 freestyle relay.

Asked what her favorite sport was, Ross couldn’t answer that easily.

“Track as far as the races go, they aren’t as physically demanding as the swim races, so I believe as a sport and the competition itself, I enjoy track more,” Ross said. “But as far as the team atmosphere, I enjoyed swimming more.”

Ross is headed to Brigham Young University-Idaho to begin work toward a degree in nursing.

Dylan Bennett works underneath the hoop this past season for the PHS boys basketball team. Bennett was named PHS Male Athlete of the Year.

Maggie Ross focused on the 50 and 100 freestyle during her senior season with the PHS swim program.