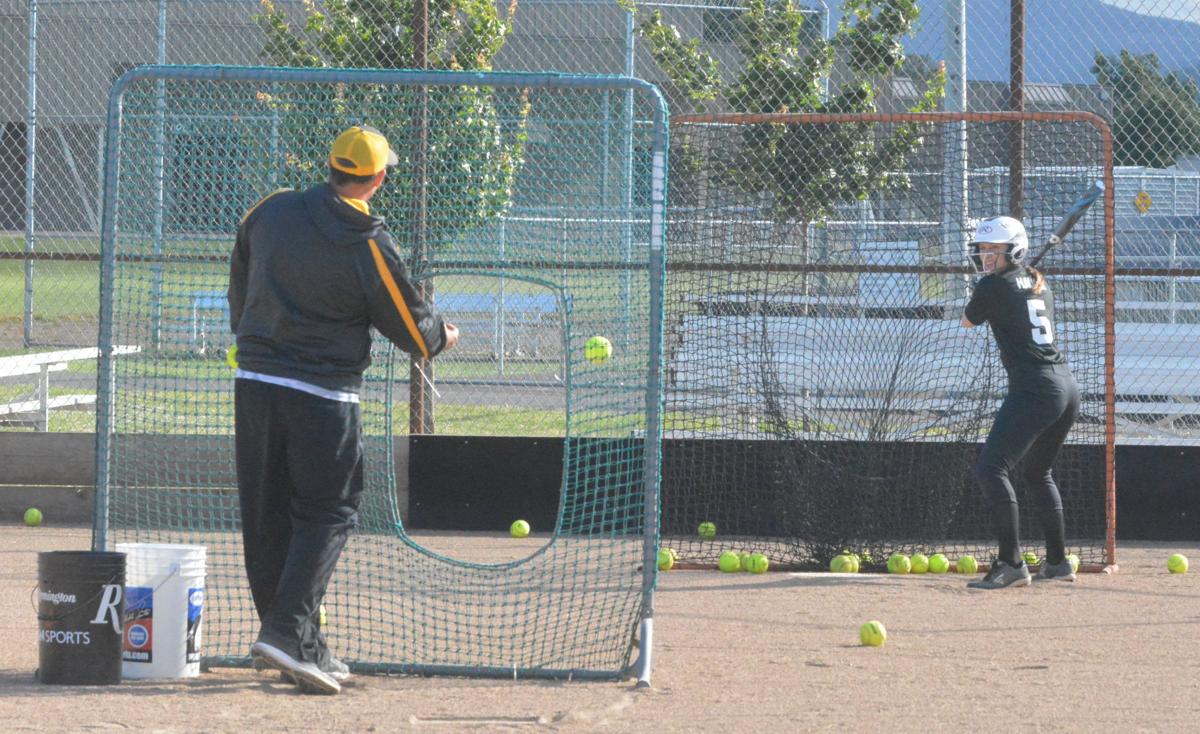 Philomath High's McKenzie Hauck gets in some work at the plate while head coach Travis King throws batting practice during a workout on July 2. 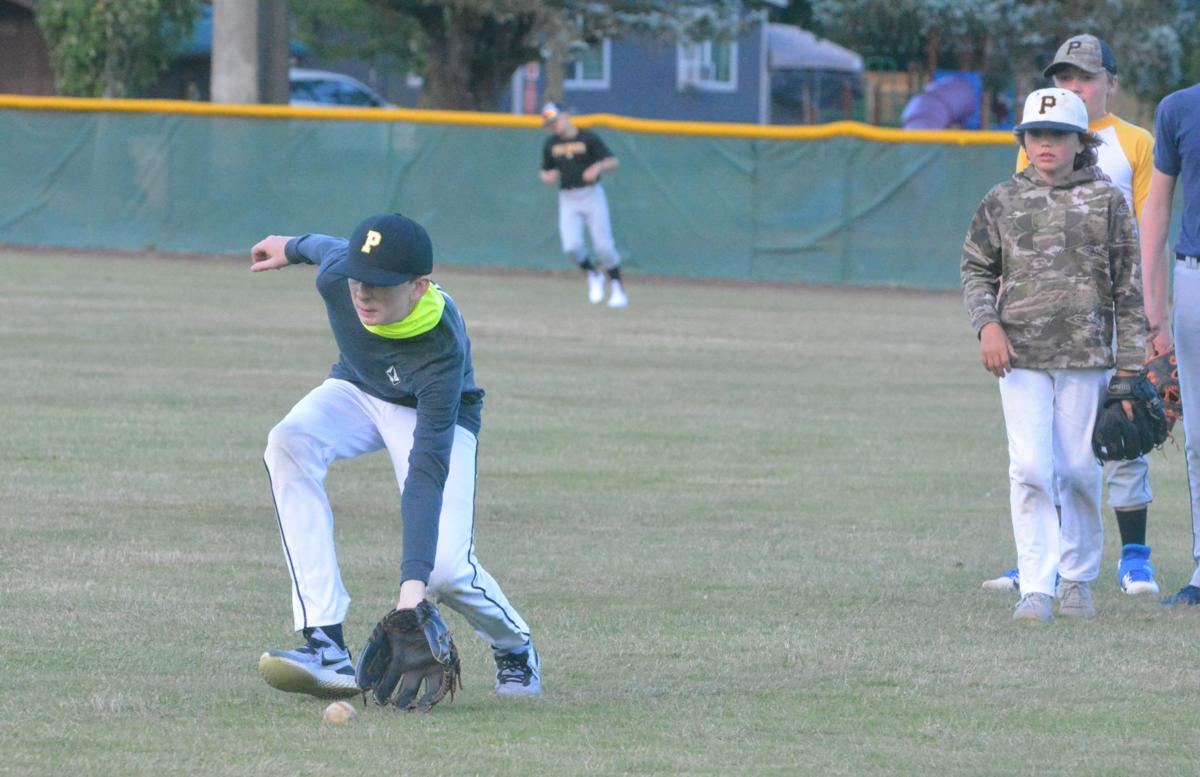 Logan Matthews makes a play on a ground ball during a recent Philomath baseball practice. 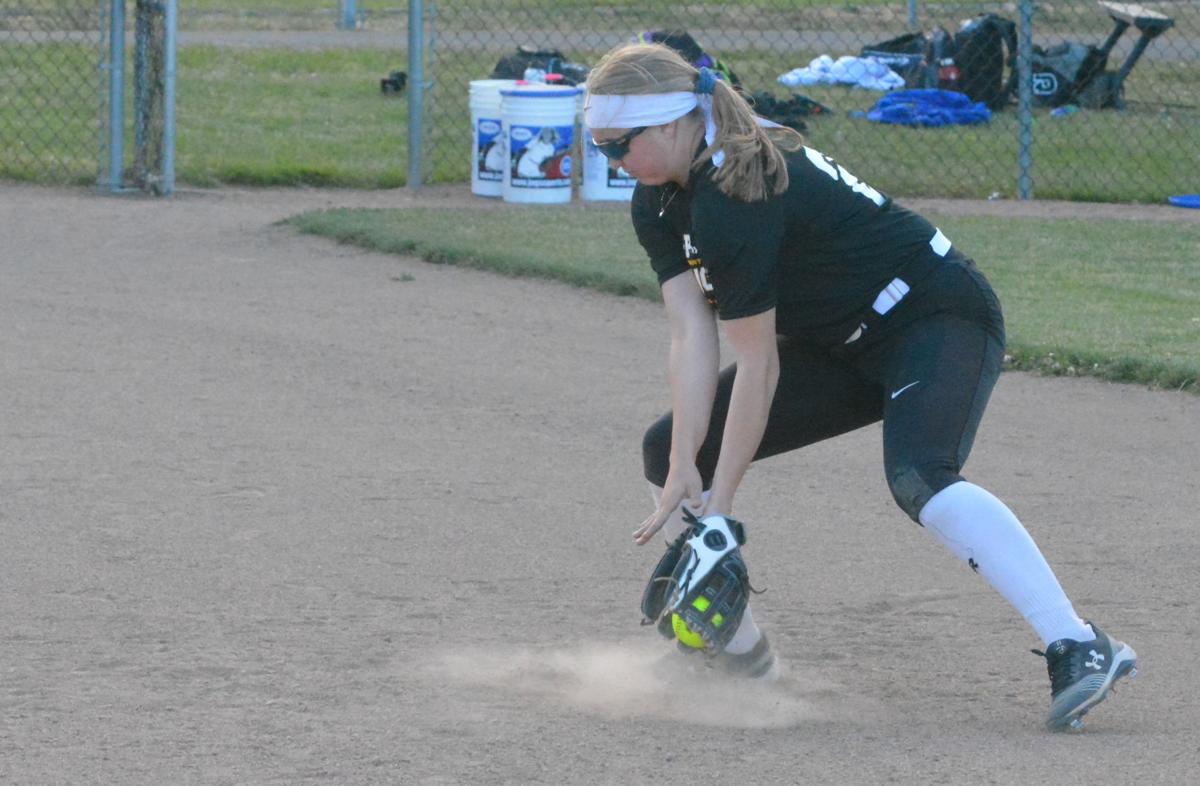 Philomath High junior-to-be Reagan Larson makes a play in the infield while a teammate takes swings in batting practice. 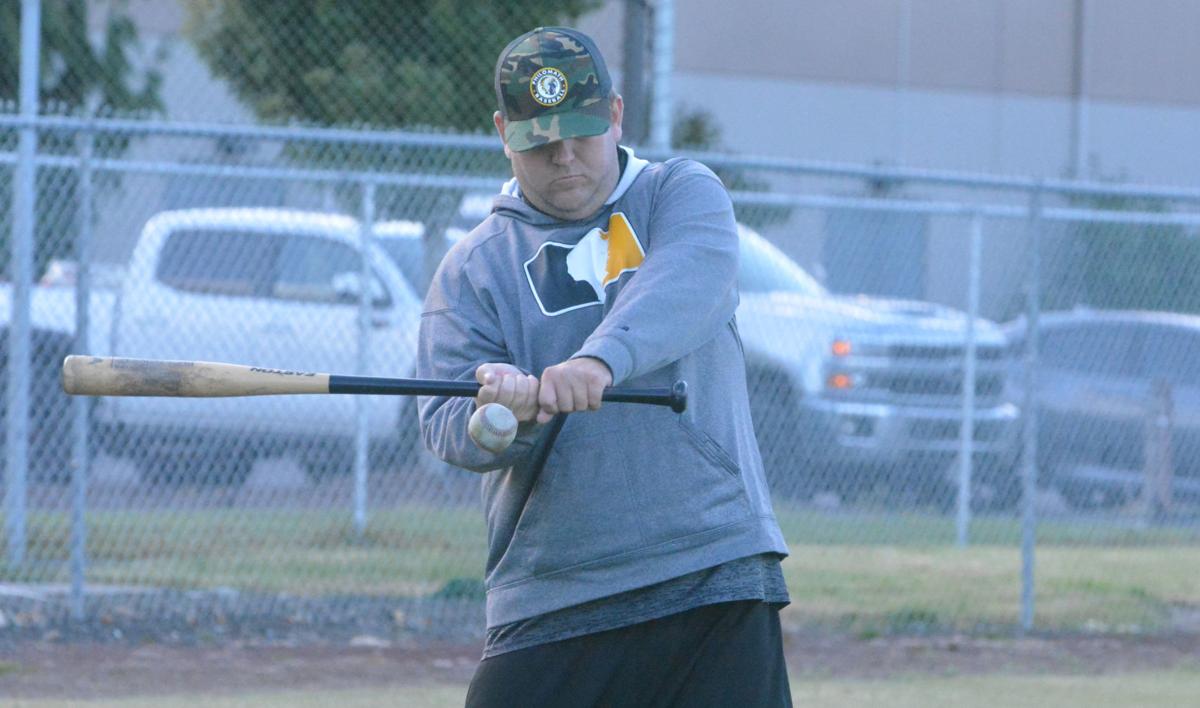 Philomath High School’s athletic fields have come to life over the past few weeks.

Several coaches from fall, winter and spring sports programs have launched voluntary workouts. Besides getting in some needed fundamental work, the practices provide an opportunity for students to get out of the house and participate in a physical activity.

“My goals for this are one, to get them out there and playing baseball again and two, to play as many stinking innings as we can this summer because everybody missed out in the spring and the summer season,” PHS baseball coach Levi Webber said. “So we’re just trying to get in as much baseball as we can.”

Coaches will go through the workouts and then hope that there will be actual seasons in the coming months.

“We prepare like we’re going to have one and get ourselves ready,” Girls soccer coach Mat Phelps said. “I’m not too worried about that for this group. It’s a big senior group that has very high expectations ... I think they’re going to put in the work that’s needed.”

The baseball team offers workouts on Mondays, Wednesdays and Fridays while boys basketball goes on Tuesdays and Thursdays. Volleyball started up July 6 with sessions for a couple of hours on Mondays and Wednesdays. Boys and girls soccer players have now been on the field for a couple of weeks in the evenings.

The football team has no formal workouts planned beyond voluntary weightlifting sessions. Athletic director and head football coach Tony Matta’s plans were to have four 45-minute weightlifting sessions — two in the morning and two in the evening. Athletes — not just football players but any student — sign up ahead of time. When the 45 minutes is up, staff spends time sanitizing the room and equipment.

“Depending on what it starts to look like, we may lengthen the session and spend some time outside,” Matta said in reference to football activities. “We won’t do any sort of blocking or anything yet ... we may work on some footwork stuff but because restrictions still limit physical contact, there are still some things we can’t do.

Matta and coaches met a few weeks ago to go over guidelines, such as questions that need to be asked before practice and when masks need to be worn. Coaches have to fill out paperwork for each session that goes to the Oregon School Activities Association.

“We have to keep them for four weeks,” Matta said. “We have our own form that coaches fill out every time after they meet that says, ‘yes, we’ve done the (OSAA) monitoring form, yes we sanitized the equipment and hard surfaces’ — they check those off and we keep those records as well.”

“You want to do it right,” she said. “There are a lot of restrictions and right now, coaches are liable and so there’s some hesitation on how we do this, especially if you’re inside.”

Each program can have no more than 50 athletes in all with individual groups limited to 10 each.

“We keep them in those groups the whole week and they don’t interact with the other groups, just interact in their own groups,” Phelps said. “In a new week, you can change the pods if you want.”

Additional restrictions include no restrooms or drinking fountains and athletes can’t hang around after practice.

Newton began last week with about 10 returning players and then planned to work with 20 or so freshmen later in the week.

“I’m just thinking I don’t want a bunch of kids to show up and then try to manage social distancing,” Newton said. “I feel more comfortable doing it with a smaller number until I see what this is going to be like and how it’s all going to work and then maybe we can up our numbers a bit.”

Coaches are required to wear masks inside the gymnasium and in the weight room but the athletes won’t need to wear one if the face covering is “inhibitive to their breathing,” as Matta said, while they’re participating in drills. It’s recommended that players not actively participating should put on a mask.

Phelps saw a dozen participants on the first day of practice on June 29, which he indicated was a normal number.

“We typically use summer as a time to slowly get the student-athletes a little bit conditioned and just used to using those muscles that they’re going to use heavily throughout the season ... build their way back into it,” Phelps said. “And then to get a lot of touches on the ball.”

Asked if the players seemed to be in poor physical shape, Phelps said he believes it’s the opposite.

“It seems like more of them have stayed active this year,” he added. “This is a really motivated group; I think they’ve got high goals for themselves if we’re able to have a season.”

Assistant coach Juleia Dooley and volunteer Shelly Brown are helping Newton with volleyball practices. Philomath has an assistant coaching vacancy that has gone unfilled so far.

Heading into summer workouts, Newton had hopes that the Warriors would be able to host its Gold Medal camp on Aug. 10.

“I’m just really trying to stay optimistic that we get to have that camp,” she said. “We have 27 girls signed up for it and it’s such an amazing camp. ... But I don’t know, there’s just so many more questions than there are answers and things are always changing — sometime for the better, sometimes going backward.”

Philomath was scheduled to go to Crook County for a team camp on July 10 but that was canceled.

“We’ll go to the end of June typically and that give us probably 25 to 30 games in a very short amount of time and we’re supper happy with that,” Ecker said. “The guys can get out and do fundamental work, which is really good. It’s just great for the kids.”

The basketball’s annual summer trip, which would’ve occurred a couple of weeks ago, was canceled.

“It’s a bummer for the boys,” Ecker said. “A few years ago, we went to Tahoe, Stockton, San Francisco, rafting, we did a ton of stuff, and it’s a lot of fun. That’s part of the reason why you play basketball, why you play a sport. It’s the camaraderie and you enjoy the experience.”

The team is scheduled to make its traditional every-other-year trip to Alaska this season, but it’s uncertain if that will happen.

Softball coach Travis King said 18 girls showed up on the first day, which he considered to be a good turnout.

“This is for girls that for the most part just want to get out there and get the work in and see if we can’t get them better and more fluent with the program,” King said. “The varsity girls — they want to play, so they want to be there just as much as us coaches. We want to be on the field, so it’s good to see that our upperclassmen are stepping up.”

Assistants Saff Evans and Adrienne Engle are helping with practices. The players are going through various infield and outfield drills along with time in the batter’s box with King throwing pitches.

King hopes to take the softball workouts into mid-August, although a definitive end date had not been decided.

For the baseball team, all players and coaches are asked to wear face coverings while in the batting cages.

“It’s way more of a challenge that I’d like it to be but it is what it is,” Webber said about the restrictions. “We’re doing what we need to do to make sure our kids are safe and have an opportunity to come out here and get something out of this summer.”

In the first week, the number of players numbered around 25 and Webber had them split up into three groups.

“We’ve got Lance (Faxon) and JJ (Faxon) and Ryan (Dillon) each running a group and I’m just floating around making sure everybody’s doing what they’re supposed to be doing,” Webber said. “We have a station where we’re working on some base running stuff and playing catch and then we have a defensive station and working on some infield-outfield fundamentals, and we’ve got a station in the cages where they’re hitting and rotating through.”

Webber’s baseball workouts started June 29 and will continue through the end of the month. It was the first time high school players had seen any baseball activity since spring practice was suspended on March 12.

The veteran Warriors coach opened up the practices to middle school players as well. Webber estimated a group of 13 or so high school players — which is typical for summer ball — along with a dozen or so players who will enter eighth or ninth grade this fall.

“The young kids didn’t have an opportunity to have a season this year so we wanted to open it up for them so they could get some kind of baseball if they wanted it,” Webber said. “You’ve got to be a bit creative with what you do but you can do just about everything. You’re just making sure you have the right people in the right groups.”

Webber’s practices will include modified scrimmages.

“The scrimmages are going to look a little bit different because we’re not going to be able to have a catcher and can’t hold any guys on base because of social distancing,” Webber said. “But we still have a way to make it functional and still play pretty much baseball other than those two things. The big thing is putting balls in play and guys having to move around and thinking and all of that kind of stuff.”

Teams don’t need to suspend activities in late July this year with the OSAA Executive Board eliminating the moratorium week.

Often regarded as the toughest and most challenging running event, the 400-meter dash requires competitors to master a combination of speed, e…

Competing on hallowed ground at Hayward Field in Eugene, track and field athletes want to finish their seasons in style by standing atop a pod…

A nine-run loss to Douglas in a play-in game marked the end of the 2011 season for the Philomath High baseball team. The Warriors had struggle…

You can’t spit, you have to wash your hands before and during games and if you’re not on the field, you need to wear a mask. But it’s baseball.

Philomath High's McKenzie Hauck gets in some work at the plate while head coach Travis King throws batting practice during a workout on July 2.

Logan Matthews makes a play on a ground ball during a recent Philomath baseball practice.

Philomath High junior-to-be Reagan Larson makes a play in the infield while a teammate takes swings in batting practice.