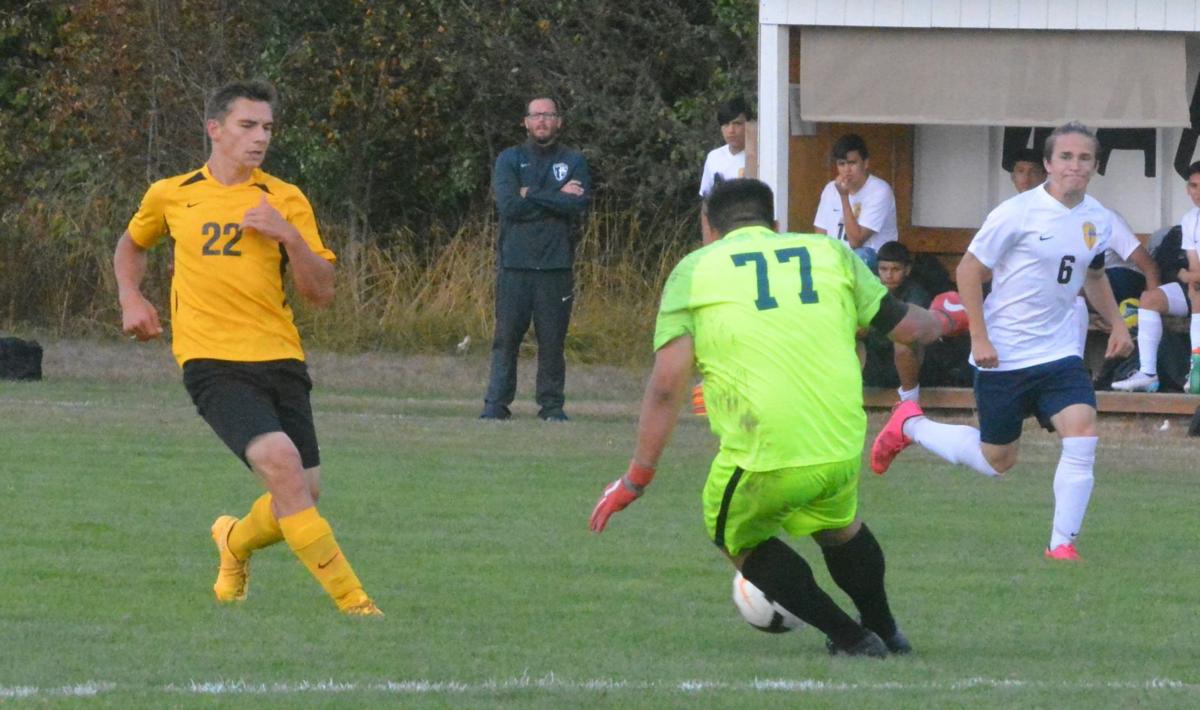 Philomath junior Andrew Mecham takes a shot on goal but Stayton goalkeeper Ivan Pelayo is in position to make a stop.

Philomath junior Judah Bacho goes to the ground for a stop Tuesday against Stayton. 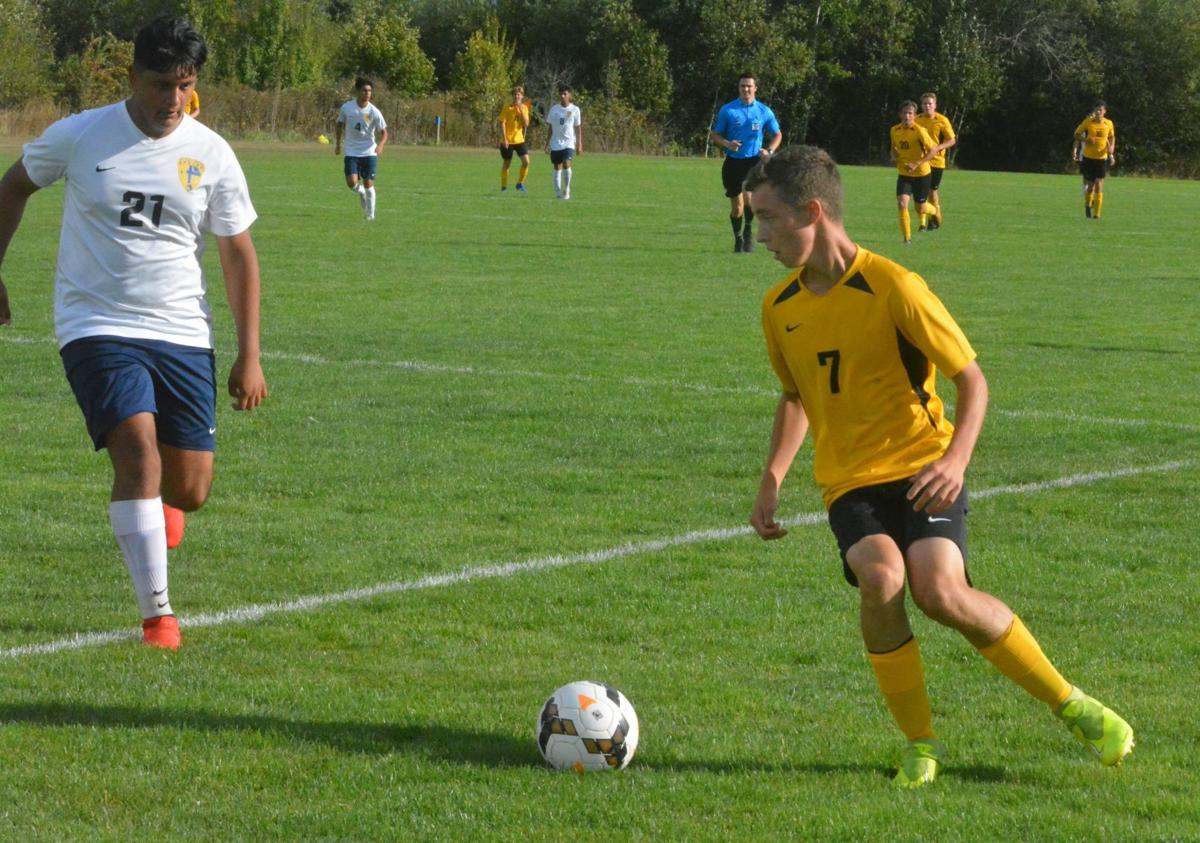 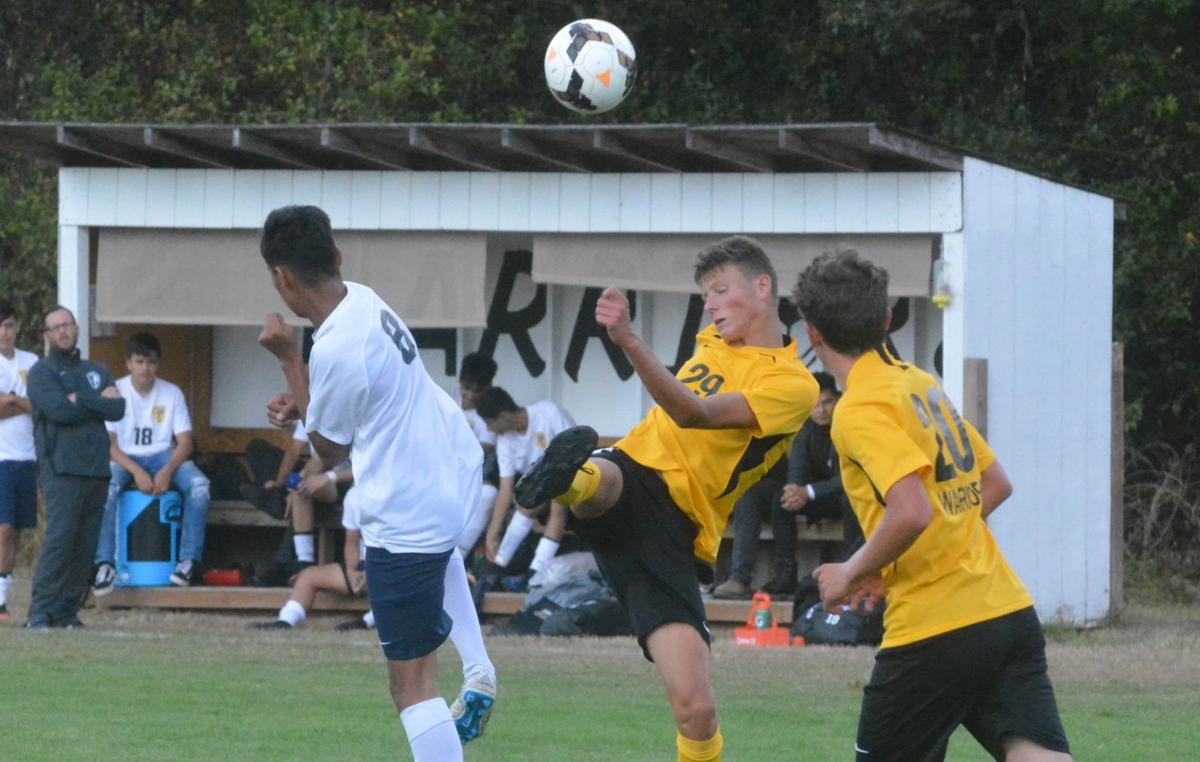 Julius Hoffman tries to get control of the ball against the Eagles.

Philomath High’s Judah Bacho hadn’t seen that many shots coming at him since last season on junior varsity.

In just his second varsity start at goalkeeper for the Warriors, Bacho certainly found his comfort zone. The junior and the defense in front of him had the challenge of trying to stop Stayton, a team that’s ranked No. 3 this week in a statewide coaches poll and considered to be one of the few contenders that might be able to challenge Woodburn for the 4A state title.

For 70 minutes late Tuesday afternoon, Bacho and the “D” had kept the Eagles out of the net. With 10 minutes remaining, sophomore Jayden Esparza snuck a ball off a rebound into the bottom corner of the net and the Eagles added a second goal a few minutes later in what ended up as a 2-0 win for the visitors.

“Personally, I enjoy it because I like having all the action,” Bacho said about the craziness that unfolded in his sights against the Eagles. “It is frustrating whenever they do score just because one got in lucky or whatever. But we have such as amazing defense and it makes it so much better. I can rely on them to get it out.”

And that’s how the game went for most of the afternoon. Stayton (2-1) came close on several occasions in the first half only to trot away in disappointment. Sophomore Isael Ramirez had a few chances from close range — one on a header in the 21st minute. His teammate, junior Julian Flores, appeared to possess the ability to find the net on well-placed free kicks and he nearly did on a few occasions. But Bacho’s 6-foot frame and outstretched arms and hands were causing problems.

“Defensively, I thought we were amazing,” PHS coach Dave Ellis said. “Judah blew me away — that was the best I’ve ever seen him play by a mile. My center-backs were monstrous again so I was thrilled with that.”

PHS junior Andrew Mecham had some chances of his own but they all ended in frustration.

“Like coach said, we really did well … he said that was the best game we’ve played in quite a while,” Mecham said. “Stayton is one of our biggest rivals and today we did really well. We held them, they were panicked, we were holding strong. It was just those last 10 minutes.”

Stayton broke the scoreless tie in the 70th minute when Esparza executed on a rebound shot.

“It bounced off the pole right into the other guy’s feet,” Bacho said about the play. “I got to it but I was inside the goal when I hit it.”

In the 73rd minute, Stayton added another goal but it came at a time when Philomath was trying to push hard offensively with the game’s minutes ticking away.

“I changed our formation to try to get the goal back in the last 10 minutes,” Ellis said. “It doesn’t matter how much you lose by … that directly led to their second goal. I had to gamble to try to get it back.”

When asked about what he takes away from the performance, Ellis didn’t hold back.

“I take away that Stayton was lucky to get out with a win,” Ellis said. Stayton had most of the possession, most of the territorial advantage. But I thought we effectively broke and created opportunities. We were a little unlucky not to do better, maybe some bad decisions here and there.”

But overall, an exceptional effort.

“I think that’s the best performance I’ve seen Philomath High School play since I’ve been here,” said Ellis, who is in his second year as head coach. “I’m not happy with the result, but the performance was amazing.”

If Philomath’s competitiveness against the Eagles serves as a sort of measuring stick, the Warriors just might be flying under the radar.

“As long as we do our best, I don’t think it matters if anyone else is wondering if we’re on their radar or not,” Mecham said. “I think we have a lot of potential this year. There are a few things that we can always improve on obviously. It depends on everyone, but I think we all have potential and we’re really working together this year.”

Philomath (1-2) gets back into Oregon West play Thursday with a jaunt over to Sweet Home. The Huskies are off to an 0-2 start with losses to Elmira and Woodburn.

Team notes: Philomath’s JV goes to 1-1-1 on the season. … Freshman Chase Ringwald’s goal halfway through the first half put the Warriors on top at halftime. … Trevin Del Nero joined the program after practice had started and his goal in the 50th minute put it out of reach for the visiting Eagles. … Philomath heads to Sweet Home Thursday.

Philomath set the tone in the opening seconds.

PHS boys battle back from 2-0 deficit but end up falling, 3-2, on road

Climbing off the bus after a three-hour ride down I-5, the Philomath High School boys soccer team would need execution, energy and enthusiasm …

Philomath junior Andrew Mecham takes a shot on goal but Stayton goalkeeper Ivan Pelayo is in position to make a stop.

Philomath junior Judah Bacho goes to the ground for a stop Tuesday against Stayton.

Julius Hoffman tries to get control of the ball against the Eagles.