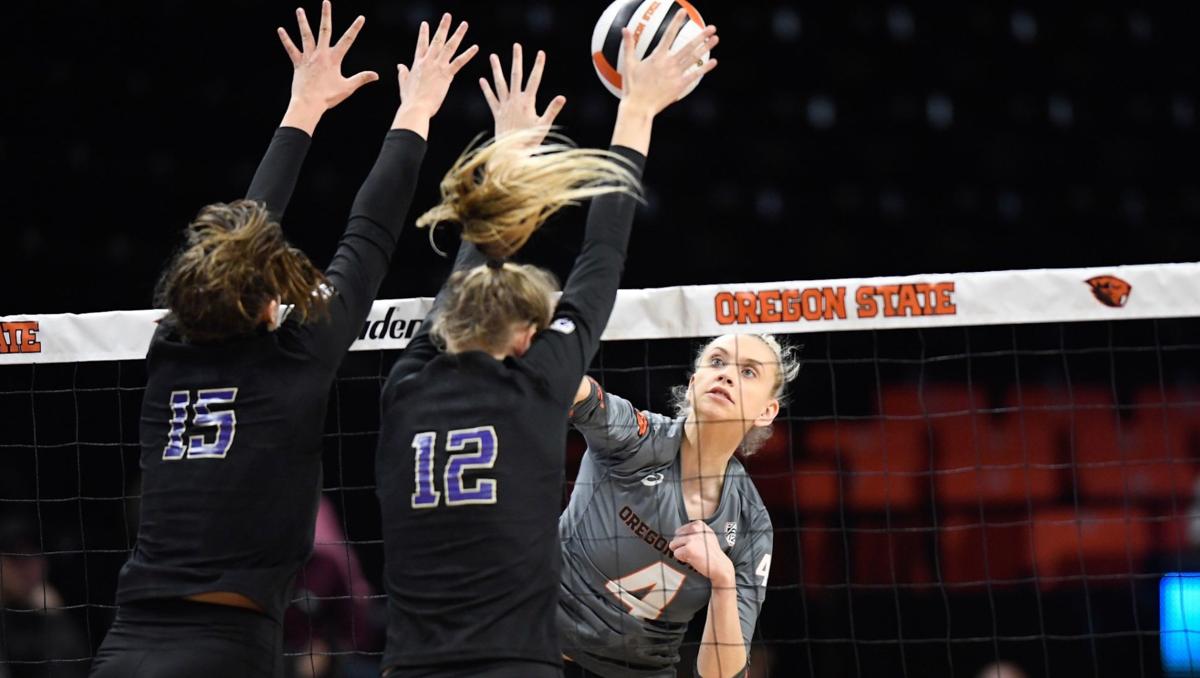 OSU junior Haylie Bennett tries to hit through a block during a match from this season. Bennett leads the Beavers in kills. 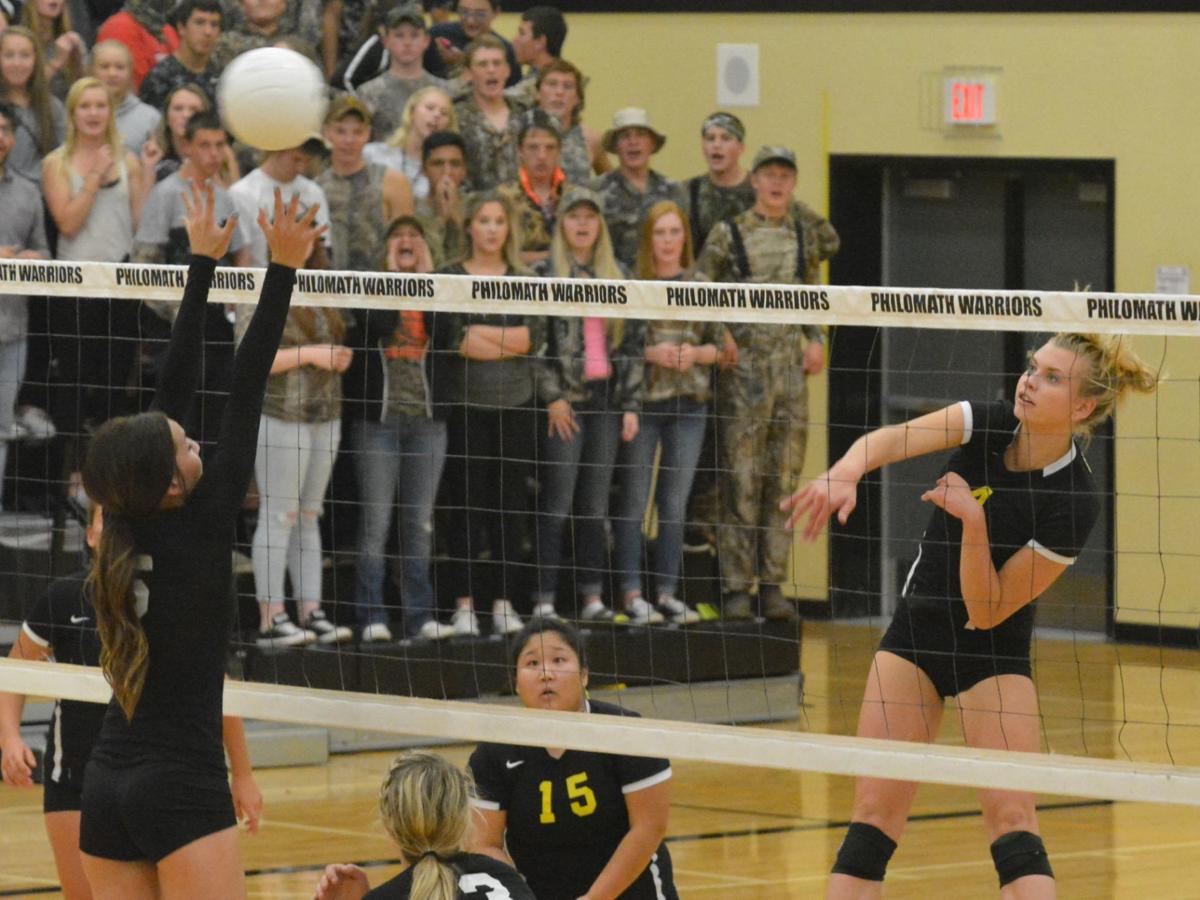 Haylie Bennett goes for a kill during her 2015 senior season with Philomath High.

Although it’s doesn’t seem possible, it’s been four years since Haylie Bennett challenged Class 4A high school opponents with powerful kills for the Philomath’s volleyball team. The 6-foot-1 outside hitter now wears the orange and black of Oregon State and the Beavers are close to wrapping up another season.

“I’m really confident with how I’m playing right now, it’s a lot of fun out there,” Bennett said this past weekend while on a California road trip. “I think as a team, we’ve definitely been facing a lot of adversity with injuries and illnesses and just changing the lineup. We’ve had a different lineup almost every single game, so a lot of different things to adapt to and to play with.”

With two matches remaining in the season, Bennett leads the team on the attack with 313 kills, or 3.07 per set, and is one of three players with 100-plus sets played. Bennett had a season-high 25 kills Nov. 17 vs. Arizona. She’s also proven to be effective on defense with 0.71 blocks per set and 62 ace blocks — both third-best on the team.

“Some of my favorite parts of the game are the 10 minutes after when we get to mingle,” said Bennett, who is the daughter of Helen and Don Bennett. “I love getting to talk with the younger girls and sign their posters and take pictures and do whatever.”

Although athletes love the thrill of competition, it’s those off-the-court interactions that complete the experience.

“I think in sports, especially collegiate sports, it’s always more than just the actual game,” Bennett said. “You have a whole community that you’re there trying to influence and support.”

Bennett arrived on OSU’s campus in 2016 and redshirted. As a freshman the following season, she started all 33 matches at opposite hitter and played in all 121 of the team’s sets. She got her name in the school’s record books in freshman categories such as attack percentage and blocks.

“In the very first Pac-12 game, I came down and I landed on a girl’s foot and I sprained my MCL in my knee, so that took me out for two or three weeks there,” said Bennett, who continued to wear No. 4 from high school into college. “And then I came back for a month or so and my foot had been hurting me for a while and it turns out when I went down with the knee, I also had torn cartilage in my foot.”

Bennett said that at first, the prognosis leaned toward a broken foot.

“I was in a boot for six weeks and then it ends up that I didn’t break it, I ended up tearing cartilage,” she said. “So then in February I had to get surgery on my foot and I was out until May or June with that.”

Although she had dealt with minor injuries like sprained ankles in the past, it was the first time she had to work through a major rehab since her early days with the Warriors.

“I got hurt in high school my freshman year, so I had to get surgery then and I was out for a while,” Bennett said. “But that (last season with OSU) was my first like major injury in a long time.

“It was a frustrating process because we couldn’t ever figure out what was wrong with it,” she added.

Asked to describe the type of player she tends to be on the court, Bennett said she tries to be pretty vocal.

“I try to have a lot of high energy on the court and I am a pretty enthusiastic person off the court, too, but I’d say I’m more of a vocal leader,” she said.

Bennett has been back to the Philomath campus to see this year’s edition of the Warriors play. In fact, she took the time to help Denee Newton and other coaches get players ready for a big match.

“I came in for a practice to help them prepare for Sisters and so that was fun,” she said. “I imitated one of Sisters’ players, the girl that gets a lot of sets and stuff, so I kinda whatever they needed me to do. I played a little middle, a did some outside stuff, I challenged them on serving — whatever Denee wanted me to do.”

Philomath pushed Sisters to five sets in a close loss on the road and then later on in the 4A state tournament, defeated the Outlaws in four sets.

“They deserve that, I wish I could’ve gone to that game,” Bennett said.

Oregon State has gone through a rough stretch in the Pac-12 with a losing streak that reached nine following losses Thursday at Southern Cal and Sunday at UCLA.

“All of our games, we’ve fallen short almost every time,” Bennett said. “We’ve been right there, we just need to finish.”

The Beavers (9-20 overall, 3-15 Pac-12) will try to right the ship Wednesday with a trip over to Utah before heading down to Eugene Friday to face the Ducks.

“That night’s always tough, but it’s always really fun. It’s super good competition,” Bennett said about playing Oregon. “The level of play is just so elevated almost in every atmosphere, but especially down there that night, there’s nothing like the Civil Wars — it’s kinda like a dogfight.”

With Bennett’s mother playing at Oregon State, growing up a Beavers fan and living close to the university, there was no doubt that she would play on the Corvallis campus. But are there any Ducks fans in the family?

“I don’t think so,” she laughed. “Maybe some of my cousins and whatever but immediate family — definitely not.”

For those who want to make the trip, the Civil War volleyball showdown begins at 5 p.m. Friday at Matthew Knight Arena.

In a dual against the No. 4-ranked team in Class 4A Wednesday night, the outcome remained in doubt until the final bout.

Philomath worked through an early deficit, pulled even by halftime and pulled away in the second half for a 57-50 win Tuesday night over Sweet…

TURNER — Down by a point late in the first quarter in enemy territory, Philomath needed an offensive boost to overcome a sluggish start. Throu…

OSU junior Haylie Bennett tries to hit through a block during a match from this season. Bennett leads the Beavers in kills.

Haylie Bennett goes for a kill during her 2015 senior season with Philomath High.