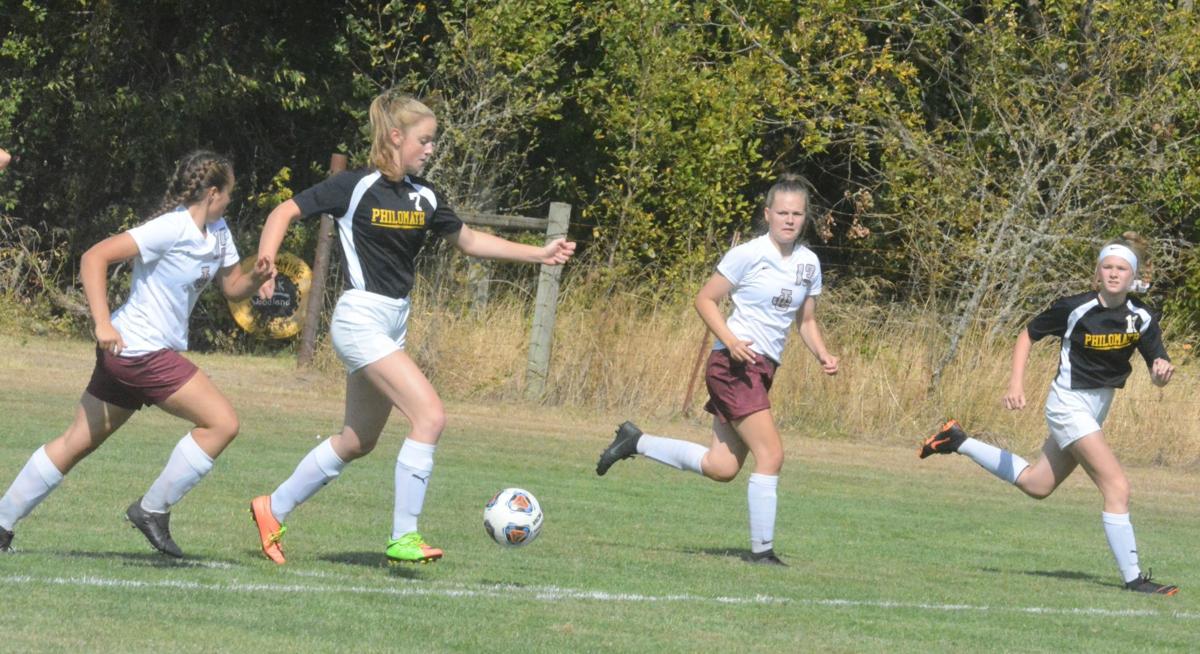 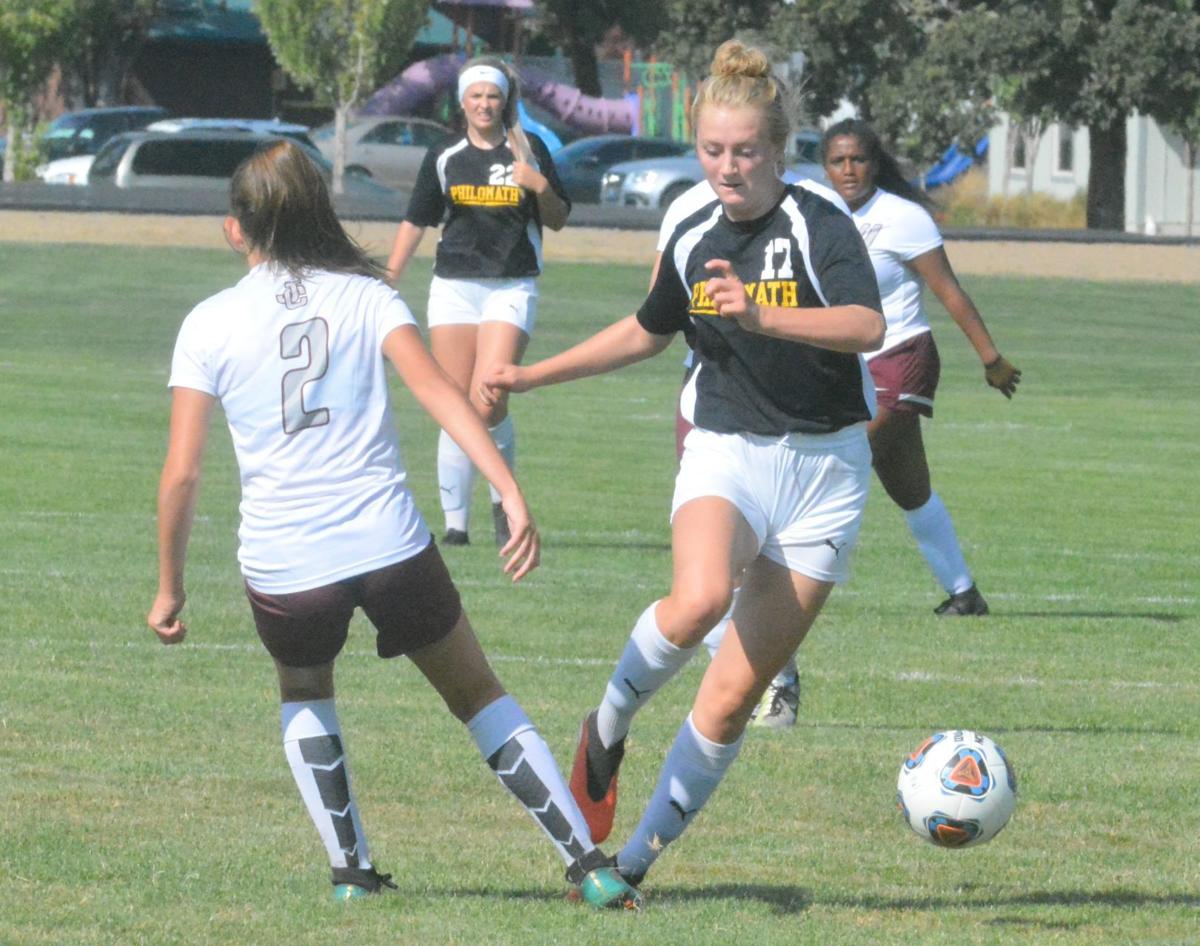 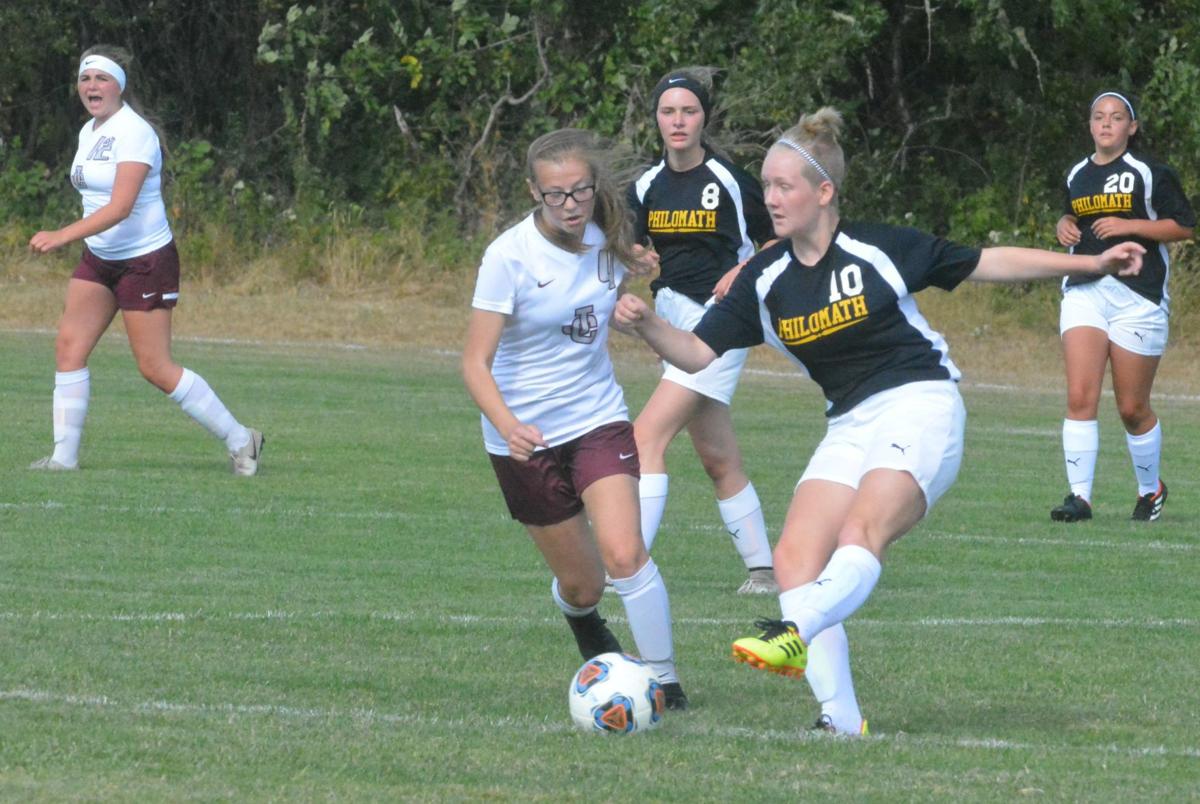 Philomath sophomore Reese Grube takes possession of the ball away from a Junction City player. 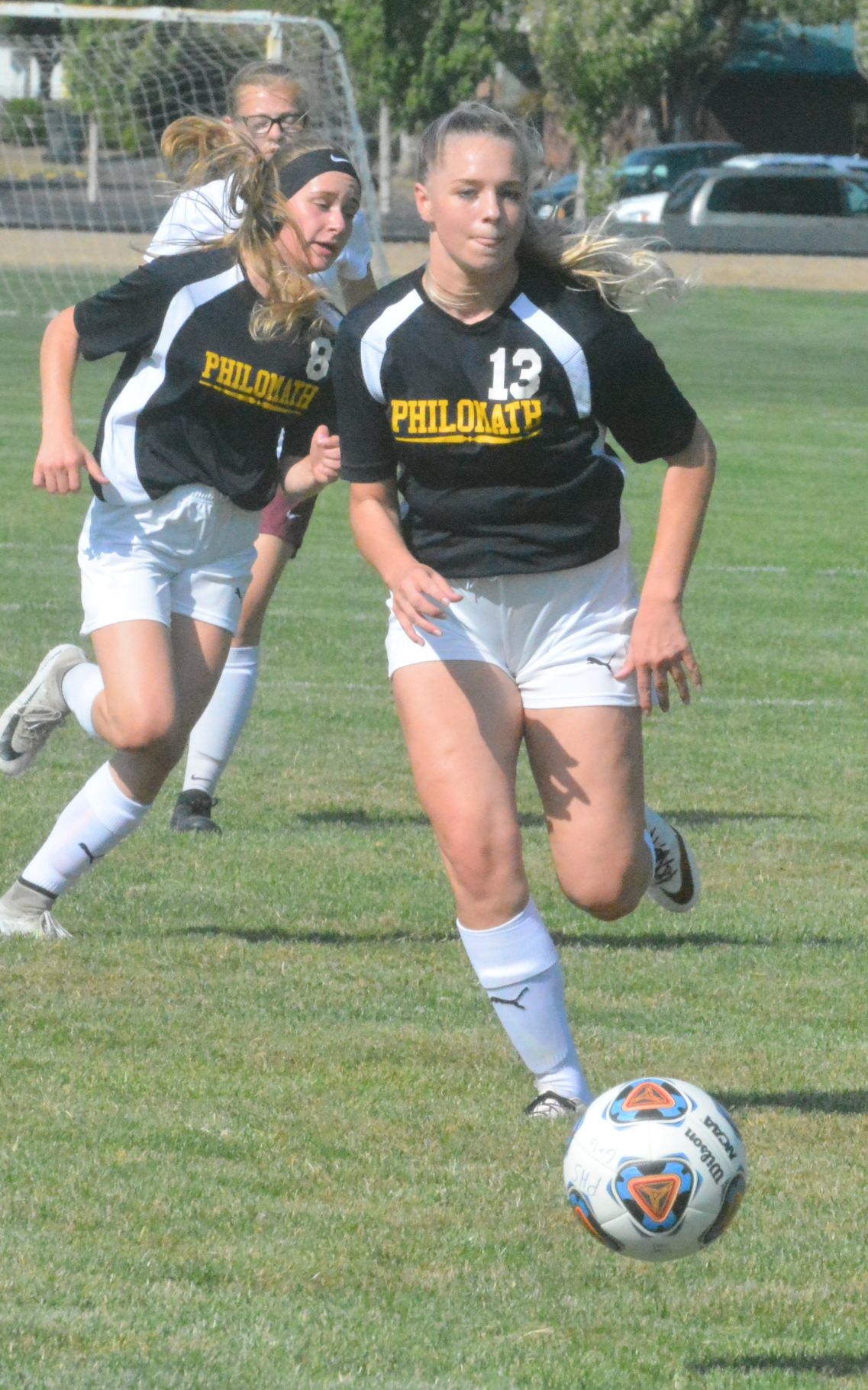 Arguably one of the top sports programs historically at Philomath High, the girls soccer team has become accustomed to making a little noise in the state playoffs.

The Warriors have advanced past the first round in each of the past three seasons — last fall exiting in the quarterfinals against eventual state champion Hidden Valley. Philomath emerged from the week-to-week battles in the Oregon West Conference and defeated Banks in the first round before running into the Mustangs.

It’s common to see the Warriors in such postseason battles year after year. Although the team would’ve enjoyed a deeper run this past year, Philomath continues to build upon its successes.

“I think anytime you get to play in the playoffs, it’s a positive experience for all the girls, especially those that are returning,” fourth-year coach Mat Phelps said Thursday after watching his team in a jamboree. “That experience, that understanding of the level of play that it takes to get there, and we’ve got a lot of returning players, so it’s good.”

Halle Hewitt, a first-team all-conference pick a year ago and one of just two seniors on the roster, said she and her teammates are working hard to find winning results on the field.

“We had not as many girls as we would like to but we’ve been working hard the past week and hopefully we will be better as a team eventually,” Hewitt said. “We’re hoping to get to a point where we can play together comfortably and know how each other plays and just be confident in the way we play and feel accomplished and hopefully get further than we did last season.”

Despite the on-the-field success, Phelps is not seeing good numbers overall with girls soccer participation. Only 19 players are on the roster, which means there will not be a junior varsity team.

“For whatever reason, we are down in our turnout this year but the girls we have here have a lot of experience,” Phelps said. “They’ve really been able to help the younger ones. I think we return eight all-conference players from last year.”

“I think one of the strengths that we have is speed,” said Phelps, who has a 32-13-6 coaching record at PHS. “We have some good speed with returning players. Our back line has always been pretty strong and we’ve got good returning players. Mia played center-back all year and she’s back for her junior year … We’re really strong in a lot of positions, there’s not a lot of weaknesses.”

Last season, Philomath finished 11-4-1 overall with a 9-2-1 performance in the Oregon West Conference. The Warriors had a couple of epic showdowns with league champion Stayton — falling 3-2 at home before battling to a scoreless tie on the road. A late-season slip against an improving Woodburn squad accounted for the other loss.

“We’ve been there every year and we have a lot of strong players returning,” Phelps said when asked about the conference. “We expect stiff competition — Stayton was right there last year, Woodburn was really strong at the end of the year. A lot of teams —Sisters, Newport — were making progress. I think the competition is good and we like that.”

Philomath experimented with formations and player combinations during the jamboree this past Thursday.

“Jamborees are great because you get to try new things,” Phelps said after a 3-0 win over Junction City. “In our second game today, we’ll try a different formation to see how that fits with the character of our team. We’ll kind of evaluate after today what works best for us.”

Hewitt said one of the options under consideration is “a different formation having four defenders instead of three.”

Philomath opens the season Wednesday against none other than Hidden Valley. It will be a true test right out of the gate. The Warriors then head to Gladstone Saturday before getting into conference play this coming Tuesday with a trip to Stayton.

When Philomath High football coach Tony Matta sits down to fill out his fall calendar, he includes November practices. If the Warriors are sti…

It doesn’t matter where Philomath’s athletes run — through shallow streams and mud pits, up and down hills, on golf courses, on the route that…

Volleyball coach Denee Newton believes her Philomath squad has the talent to compete with any Class 4A school in the state, including Sweet Ho…

The front three could be a problem for opposing defenses.

An early-season tour against some of the state’s top girls soccer teams in Class 4A continued Saturday with Philomath’s trek to Gladstone. For…

Philomath sophomore Reese Grube takes possession of the ball away from a Junction City player.