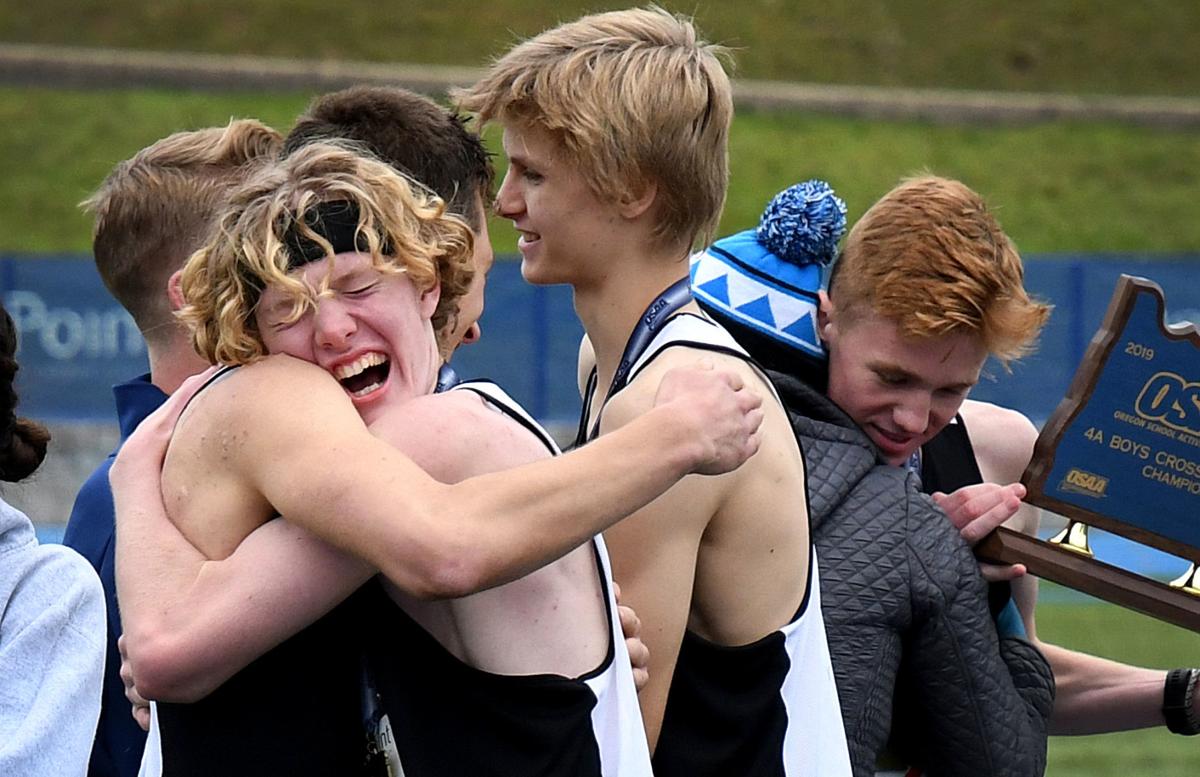 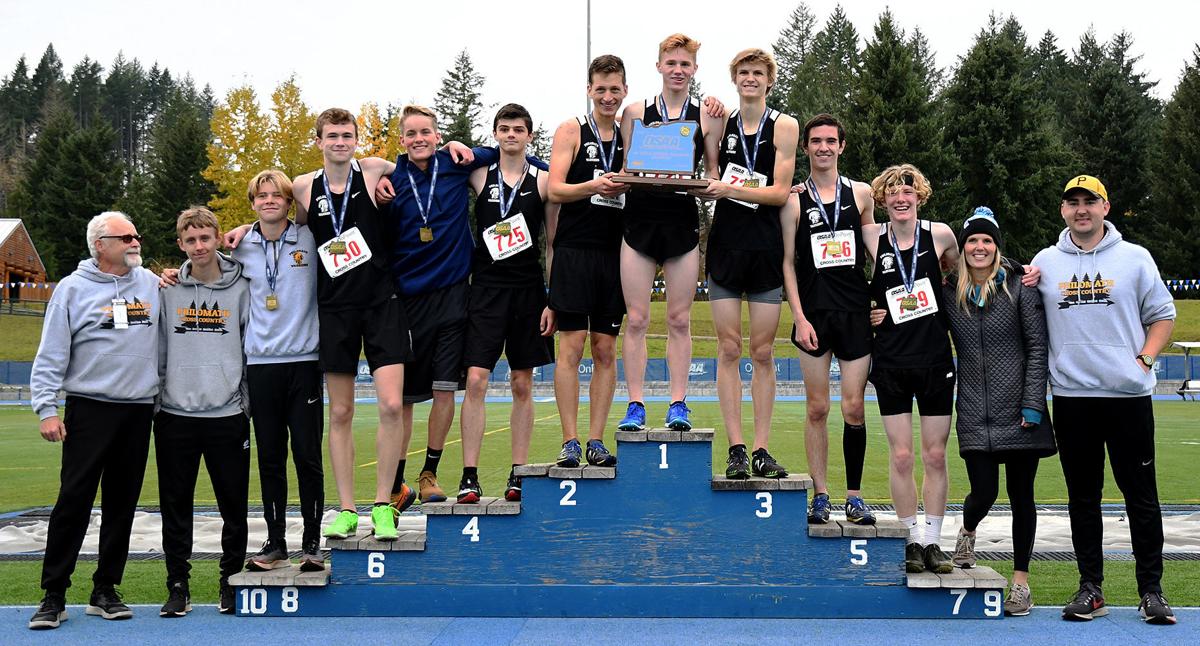 Philomath High's boys cross-country team stands on the podium at the state track venue Saturday in Eugene with the 4A championship trophy. 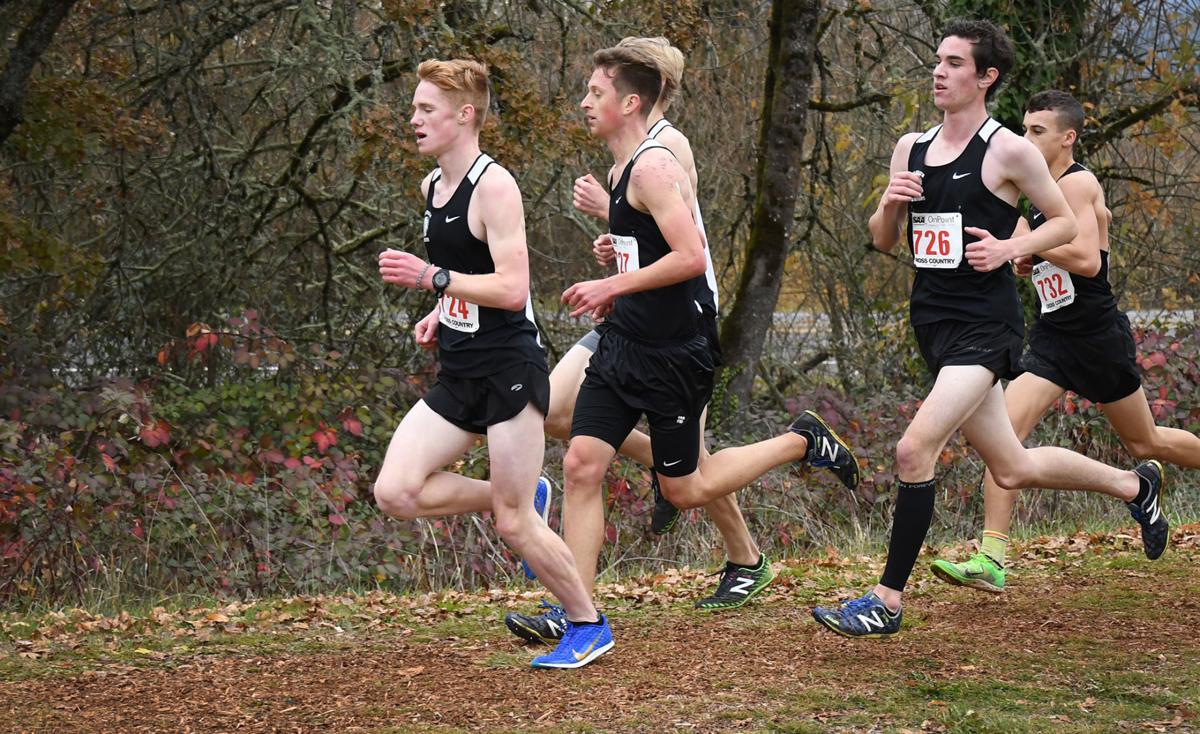 EUGENE — The team couldn’t wait for the first meet to arrive.

Over the summer months, the Philomath High boys cross-country team knew it had the potential to pull off something special this fall. At Saturday’s Class 4A State Championships at Lane Community College, the Warriors saw their hard work pay off as Philomath won the state title.

Brody Gerig, who joined the team midway through the season after his recovery from a stress fracture in his tibia, got the chance to hold a state title trophy in his final fall with the program.

“It means a lot — I can’t even put it into words, it’s unreal,” Gerig, a senior, said after his 15th-place finish. “We have improved tremendously; it’s been a huge team effort. We’ve been praying before each one of our races and giving God the glory and it’s just been awesome, it’s been so cool.”

“I was really happy with how I did because coming into the meet, the whole time we were just talking about how our team wanted to win,” said freshman Brody Bushnell, who came in as Philomath’s top runner in ninth. “We were nervous at districts — Sisters beat us so we just had to have a focused mindset to get the win.”

Veteran coach Joe Fulton said the No. 5, 6 and 7 runners really came through.

“We knew it was going to be hard for Sean (Cummings) and Levi and Noah (King), but they stayed close,” Fulton said. “I think there were 28 seconds separating our top five guys and that’s hard to beat, especially when they were running as fast as they did.”

“I am so pleased with how we did,” junior Grant Hellesto said. “It was a phenomenal race and we all worked together and had a great finish.”

Coaches from around the state voting in a preseason poll believed Marist Catholic or Newport would take the championship although Philomath received enough points for third.

“Just getting beat by Sisters at districts made us want it more,” said King, a senior at Kings Valley Charter School student who runs with the Warriors. “It made us come back harder — it did for me at least.”

Junior Justin Enghauser was one of the team’s biggest success stories with huge chunks of time coming of his PR in the final month.

“Oh my gosh, we were ecstatic,” said Enghauser, who placed 18th. “We’ve been thinking about it all summer and now it’s finally here. We were mentally in it — we felt great this morning.”

Coaches worked with a team with runners that pushed one another.

“I think we knew we had the talent, we just needed to put it all together and get the guys to believe they could do it,” assistant coach Tyler Thomas said. “The second the season started, they just exploded. They all were extremely good training partners, which helps a lot. They were each other’s best ally almost the entire season.”

“These guys really like each other,” he said. “They race for each other and that makes a big difference.”

Philomath returns most of its team next season and has an extremely talented group of junior varsity runners in the mix. Could it be the beginning of a string of title runs?

EUGENE — Finishing second to Sisters in the Oregon West meet a week earlier did not sit well with the Philomath boys cross-country team.

Philomath High's boys cross-country team stands on the podium at the state track venue Saturday in Eugene with the 4A championship trophy.