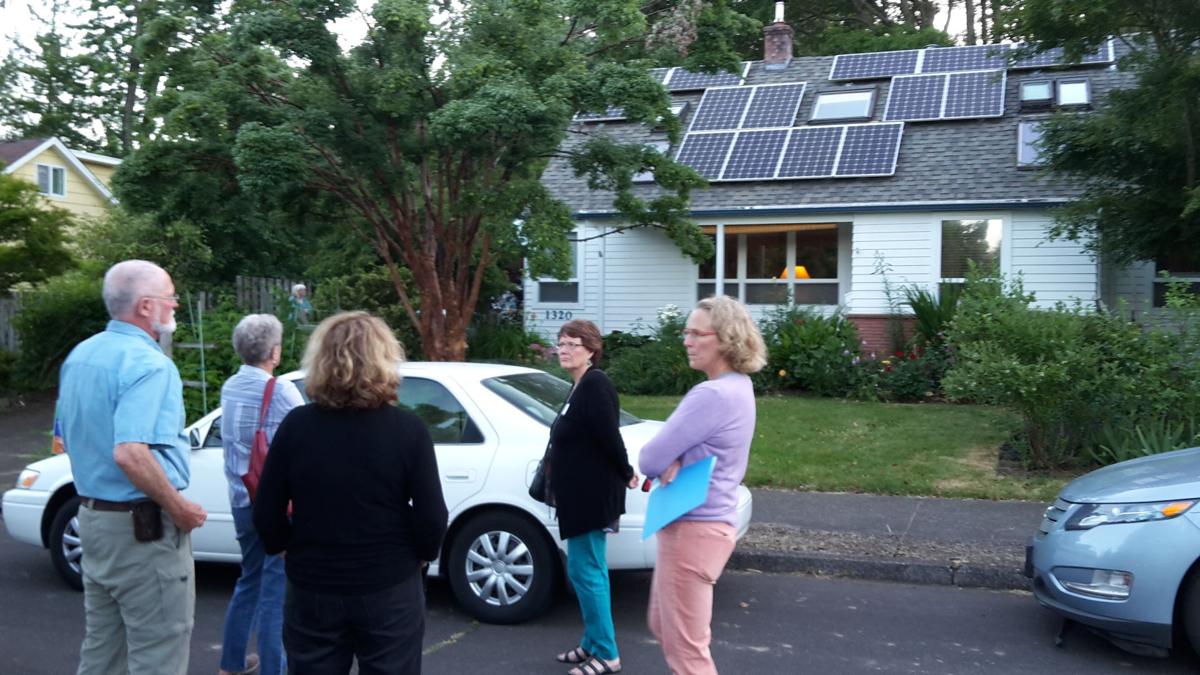 Charlie Miller, left, discusses his rooftop solar panels at a solar house party Wednesday in northwest Corvallis. At right is Julie Williams, whose nonprofit Seeds for the Sol works to arrange financing for homeowners who want to add solar. 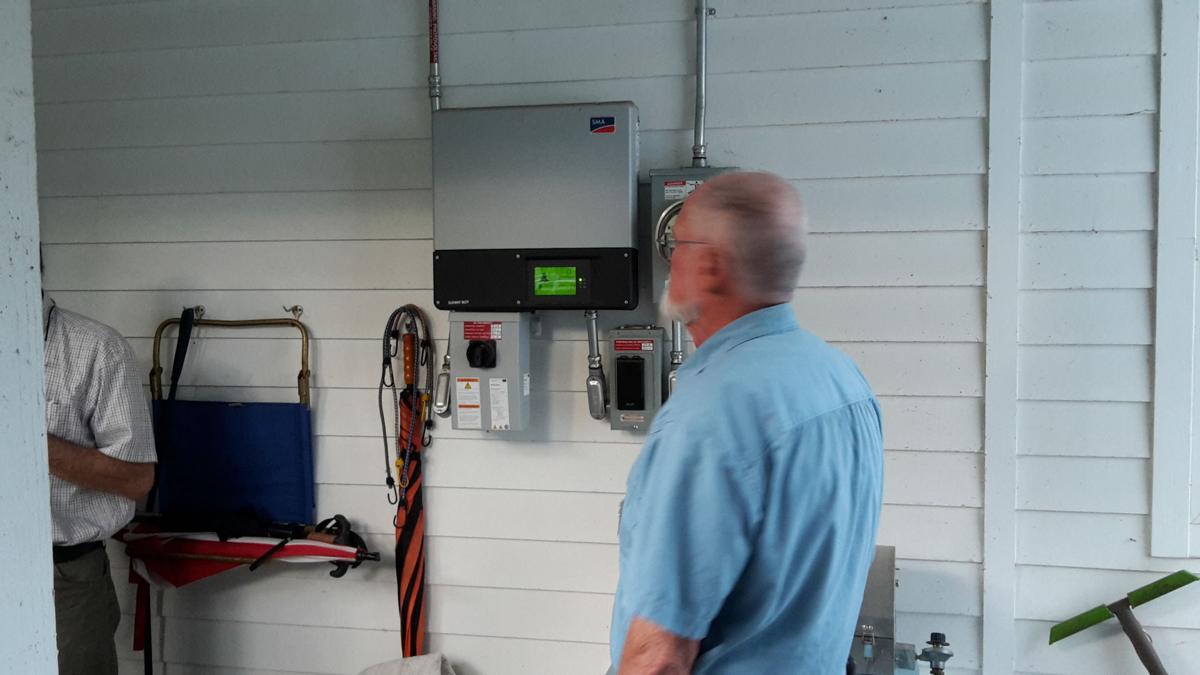 Charlie Miller explains how the power from his rooftop solar panels is routed into his home's electricity grid.

“You people are the guinea pigs,” said Annette Mills. “This is our first solar house party, and we’re going to keep having them monthly until we run out of hosts or everybody has solar on their roof.”

Mills, facilitator of the Corvallis Sustainability Coalition and three other members of the coalition’s Harvest Sunshine team, held an informational event on solar power at the northwest Corvallis home of Charlie Miller and Martha Clemons.

More than 20 people participated Wednesday and heard presentations on financing and other issues. And the guests came loaded with questions.

The basic model discussed was a 4.7 kilowatt system that costs $12,400. After rebates and tax incentives, the homeowner usually is out just $2,600 — and then reaps the future benefit of drastically reduced energy costs.

Clemons, Mills and Julie Williams of the nonprofit Seeds for the Sol all noted that their electricity bill is essentially zero, with their only payment being the standard hookup fee.

“We generate more than we use,” Clemons said. “The power company keeps track, and we use in winter what we gain in the summer. Every time we generate 3KW per day we are banking electricity for later. I’m disappointed when I wake up and it’s foggy.”

Miller noted that adding solar “helps you learn to cut back what you use. I’ve learned to keep my washing machine unplugged.”

Party participants came from as far away as Albany and South Corvallis and the questions ranged widely, from the influence of trees, to insurance, reliability issues, how many panels should be used and which direction they should face.

Tree cover can be tough to work around, said Cassandra Robertson, a member of the Harvest Sunshine team and co-owner of Abundant Solar. Robertson said that the tax credits require that an installation be at least 70 percent efficient.

Another challenge for solar is the politics of tax credits. The federal credit, which is worth about $3,000 per year, is set to run for another five years, but the $6,000 state tax credit sunsets at the end of this year unless the Oregon Legislature acts to continue it.

Homeowners who install by Dec. 31 would get the full state tax credit even if legislators do not renew it, but those installing after Jan. 1 would be out of luck.

Harvest Sunshine is an initiative of the Corvallis Sustainability Coalition, which has a goal of doubling the amount of rooftop solar by the end of 2020. In year one, the project increased the solar electricity production to 4,643 megawatts, a 13 percent increase. The group hopes to get to 10MW by 2020.

"This is a significant increase," Mills said, "but we need to dramatically step up the pace of shifting to renewable energy in order to meet our goal and to combat climate change."

Miller showed the participants the DC to AC inverter box just outside his back door, and everybody gathered in the street to look at the rooftop panels. The roof has a number of skylights that forced installers to be a bit creative with placement.

Also, the roof faces east. A southern exposure is best for solar, but Clemons and Miller have had no trouble generating the juice that they need.

The Corvallis Sustainability Coalition plans to hold the solar house parties on a monthly basis. If you would like to attend or host one, please email info@sustainablecorvallis.org

For more information on how to arrange for an installation through the nonprofit Seeds for the Sol, go to www.seedsfothersol.org

To Your Good Health: Lung cancer screening only recommended for those at high risk

DEAR DR. ROACH: For over six decades, I have lived with smokers. My parents smoked around their children inside our family home and inside the…

Charlie Miller, left, discusses his rooftop solar panels at a solar house party Wednesday in northwest Corvallis. At right is Julie Williams, whose nonprofit Seeds for the Sol works to arrange financing for homeowners who want to add solar.

Charlie Miller explains how the power from his rooftop solar panels is routed into his home's electricity grid.