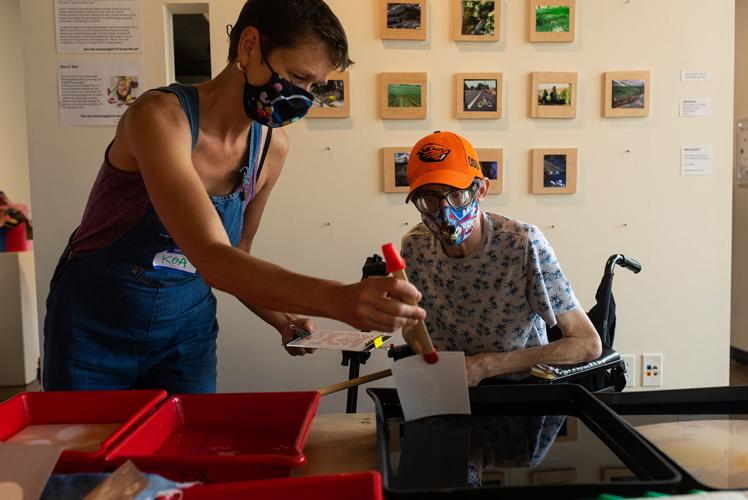 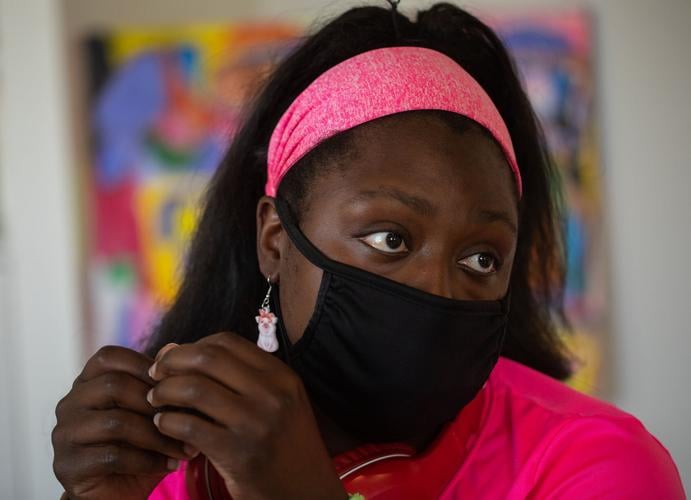 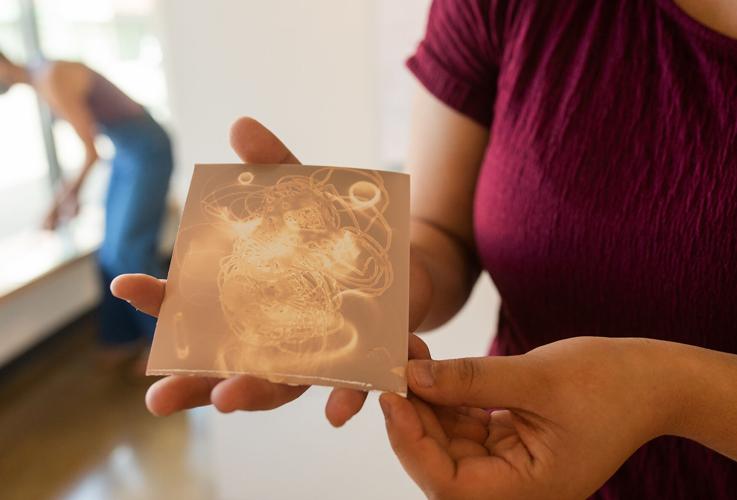 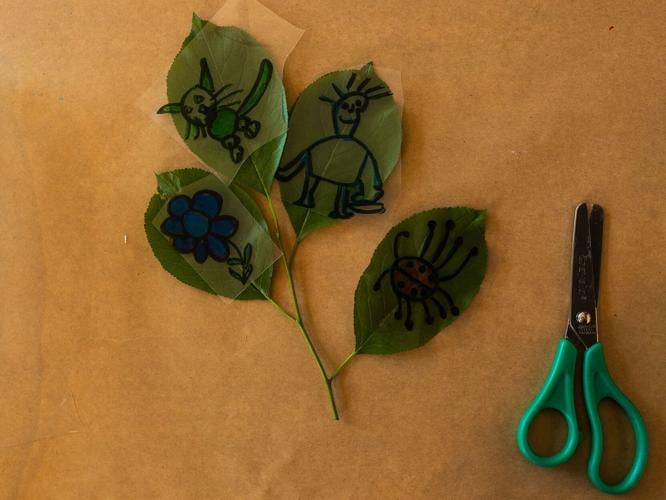 Mixed-media artwork is arranged on a table at the Joan Truckenbrod Gallery in Corvallis. 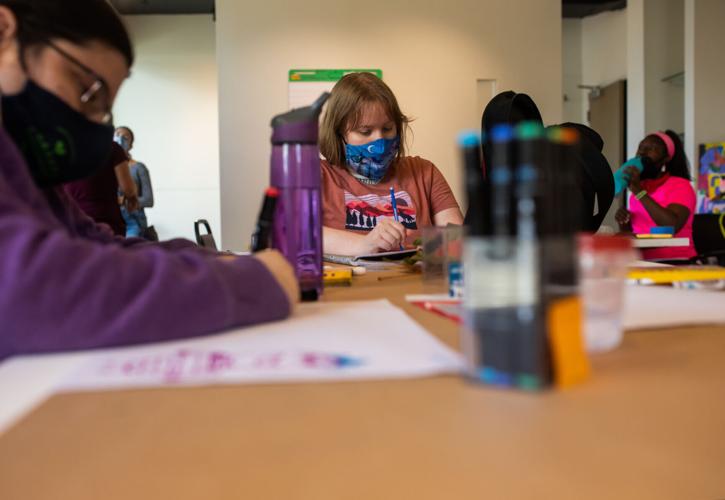 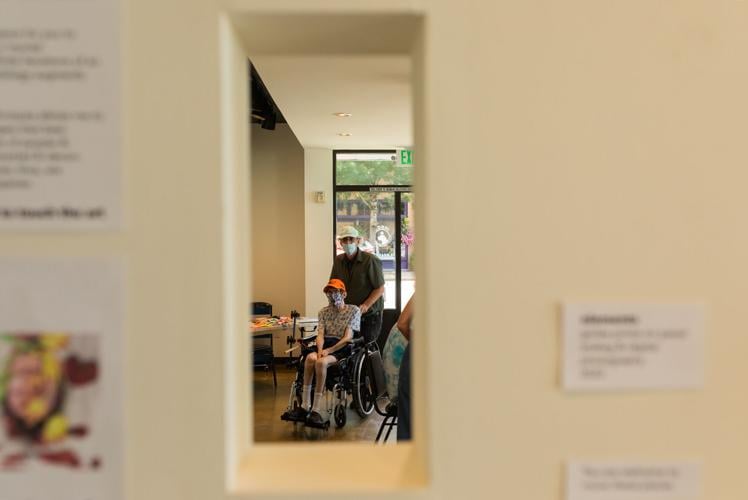 Photographer Greg Persons is visible through an interior wall during a Living Studios Design Cafe workshop at the Joan Truckenbrod Gallery in Corvallis.

Living Studios started out in 2020 as a way for neurodiverse artists in Corvallis to connect over Zoom, and has since grown into a program for the artists to exhibit their work professionally and gain national recognition.

“It’s to really look back and think about what we’ve done, because it’s really been quite broad and amazing,” program director Bruce Burris said. “We don’t teach — we’re acting as cheerleaders and artists who are encouraging others.”

The artists with Living Studios are in residence at the Joan Truckenbrod Gallery, 517 SW Second St. in downtown Corvallis, for the month of July. During this period, they are hosting a Design Café, in which the artists will create new artworks, participate in daily workshops and host a Corvallis Art Walk event on July 21.

Burris said he is eventually trying to move Living Studios downtown from its current location in Southtown, so the Joan Truckenbrod residency has provided a taste of what it will eventually be like.

“It’s easier to be a part of your community when you’re at the heart of it,” he said. “We really try to connect people to community and community to people.”

Living Studios is an arts and culture program under Cornerstone Associates Inc., an organization that creates employment opportunities for people with disabilities. Executive Director Ken Smith said he is extremely proud of this particular arts program.

“What Bruce has done to that program in the last few years has been a stellar feat,” Smith said. “He’s a wonderful curator for our population, and he sees potential and builds on it.”

The artists create all kinds of art: painting, drawing, crocheting, sculpting, writing and more. At the gallery, Rachel Grant worked on converting a journal into one of her 60 fantasy novels, while Lin Musick created photographic scenes on a leaf.

“One time I made a Black Lives Matter zine,” Musick said. “I drew Black life heroes, like Michelle and Barack Obama, Rosa Parks and Harriet Tubman, and included quotes.”

All of the artists with Living Studios exhibited in 2021 at the Schneider Museum of Art in Ashland. Burris said they’ve also exhibited all over the country, from New York to Lexington, Kentucky, to Miami Beach and places here in Oregon.

Each week in July has a different theme: The first week was history and celebration of self-taught artists, the second is book- and zine-making, the third is language and culture, and the fourth is fiber arts, stickers and multimedia.

A fundraiser is set for 3:30 to 6 p.m. July 28 at the gallery. Smith said the fundraiser is a step toward the goal of eventually getting a ceramics program going.

Julianna Souther has worked for Living Studios since the beginning, and runs the daily Zoom workshops. Artists from Eugene to Portland participate in these sessions, and she said it’s a great way for people to meet each other and connect over shared interests.

Burris said it is important to transition the program downtown so the artists can volunteer or take field trips to the museum, go to the farmers market and walk along the river.

“I don’t think people understand how successful the artists in this program are,” he said. “I don’t think they get it. It is really incredible.”

Joanna Mann (she/her) covers education for Mid-Valley Media. She can be contacted at 541-812-6076 or Joanna.Mann@lee.net. Follow her on Twitter via @joanna_mann_.

"We really try to connect people to community and community to people.”

Big-band music on summer evenings in this Corvallis park

The Hilltop Big Band is once again performing in the park this summer.

Don't fear them! They're burning for you.

Spotlight: An open house at a beautiful old house in Corvallis

Local residents and visitors are invited to come inside the 1855 Fiechter House at William L. Finley National Wildlife Refuge south of Corvallis this summer.

Mixed-media artwork is arranged on a table at the Joan Truckenbrod Gallery in Corvallis.

Photographer Greg Persons is visible through an interior wall during a Living Studios Design Cafe workshop at the Joan Truckenbrod Gallery in Corvallis.