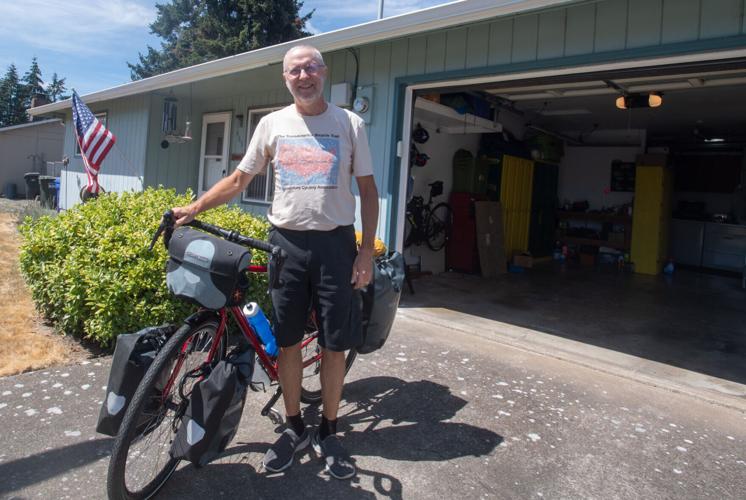 Dick Hagan with the bicycle he took across the country while riding the TransAmerica Bicycle Trail. 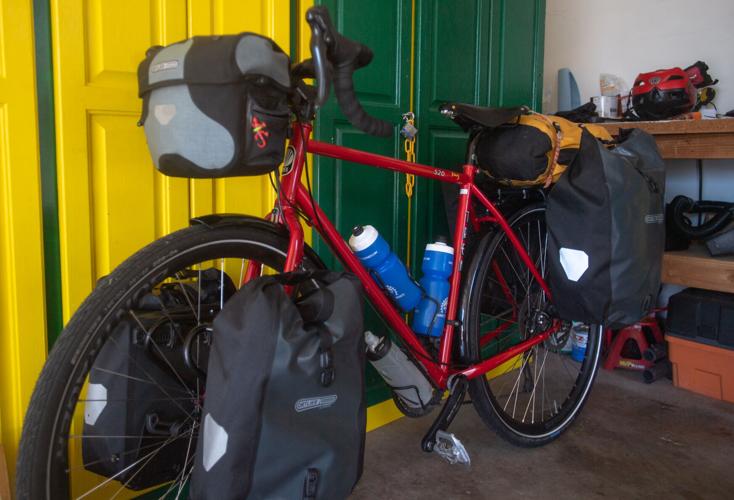 Hagan’s bike that he named “Lucy” in the garage of his home in Jefferson. 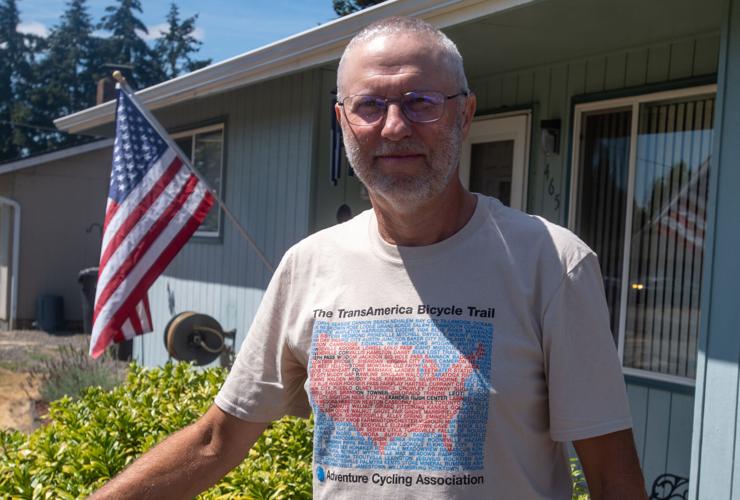 Dick Hagan thought about buying a TransAmerica Bicycle Trail jersey but opted for the T-shirt because he knows his days left cycling outdoors are numbered.

For many cyclists, the prospect of biking nearly 5,000 miles from Yorktown, Virginia to Florence, Oregon is a daunting enough affair.

Known as the TransAmerica Bicycle Trail, this tour intimidates even the most experienced riders with its sheer distance, elevation gains and heavy equipment in tow.

“I didn’t do the tour to raise awareness about my conditions. I did it because it was my passion,” said the 61-year-old at his home in Jefferson.

Growing up in Albany, Hagan cycled often as an adolescent. He dreamed of doing a self-supported bike tour and even rode to Idaho and back with his cousin at one point.

It was not until 10 years old that he began to notice that he struggled to see in the dark. Shortly after, he realized his peripheral awareness of small, fast-flying objects was slipping.

Concerned about his visual acuity, Hagan saw a retinal specialist and was told that there was nothing that could be done for him.

Retinitis pigmentosa is a degenerative disease that kills the cells sculpting the retina, weakening the ability to filter light. Night blindness begins at youth and progresses to severe vision loss through midlife, accompanied by various other impairments.

Despite the prognosis, Hagan would work a job in information technology for 33 years and cycle all the while. He joined a bike club in 2012 and would bike to the Oregon coast, the Washington coast, the Canadian border and San Diego over the next five years.

He kept working for two years following the diagnosis, until retiring from medical leave in 2019.

But his cycling days were far from over.

Hagan heard of the TransAmerica bike tour through a fellow cyclist in April. Learning that the tour took riders through mostly rural areas, Hagen knew he could focus clearly on the scenery at bicycle speed. He entered the event to fulfill his lifelong ambition.

“It was a good route with meeting so many helpful, friendly local people and really experiencing their cultures during our 4,228-mile ride,” Hagan said.

Hagan said each day “had its own pros and cons,” ranging from the steep hills of Kentucky and Missouri to the historic site of Williamsburg, Virginia.

“I can get lost on a road, because I can barely see the line,” he said. “Also, with hearing aids, there’s no sound direction. It gets kind of scary.”

Tracking just over 50 miles per day, Hagan would frequently stop to sleep in hostels or pitch tents on city hall lawns. Many businesses offered lodging to cyclists for free, he said.

Toward the end of the journey, Hagan took a nine-day break to recharge in Pueblo, Colorado. Now, he vows to never take another rest day again.

“When you stop for that long, it’s hard to get going again,” he said.

Upon completion of the tour, Hagan said he thought he did “OK physically” but was “more mentally tired.”

“These guys live and breathe cycling,” he said. “But I had fun on this tour. When I got back, it didn’t seem like that much time had passed.”

Hagan said he plans to continue outdoor cycling for at least a few more years. When his vision problems present too big of a barrier, he will transition to indoor cycling, so he does not have to give up his favorite pastime.

Lamps and overhead lights brightly lit the space of his living room as he spoke of his experiences. He explained that it was due to his increased illumination requirement, one of the many effects from his progressive blindness.

“On a clear, full moon night, I can only see the moon and everything else is black,” he said. “I can’t even find one star.”

When asked what he wants people to know about his capabilities as an athlete, Hagan responded with a simple but empowering statement.

“I may be deaf-blind, but it didn’t stop me from doing this TransAmerica ride.”

Dick Hagan with the bicycle he took across the country while riding the TransAmerica Bicycle Trail.

Hagan’s bike that he named “Lucy” in the garage of his home in Jefferson.

Dick Hagan thought about buying a TransAmerica Bicycle Trail jersey but opted for the T-shirt because he knows his days left cycling outdoors are numbered.