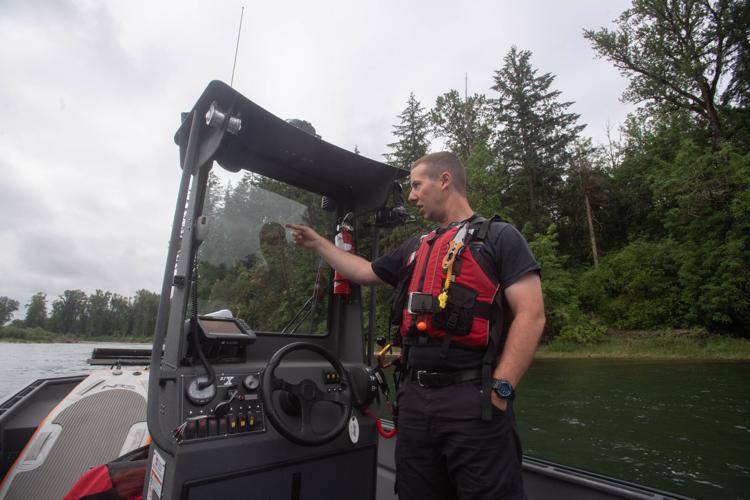 Division Chief for the Jefferson Fire Department Louis Gisler points to an area of the Santiam River that has recently changed routes due to heavy rainfall. 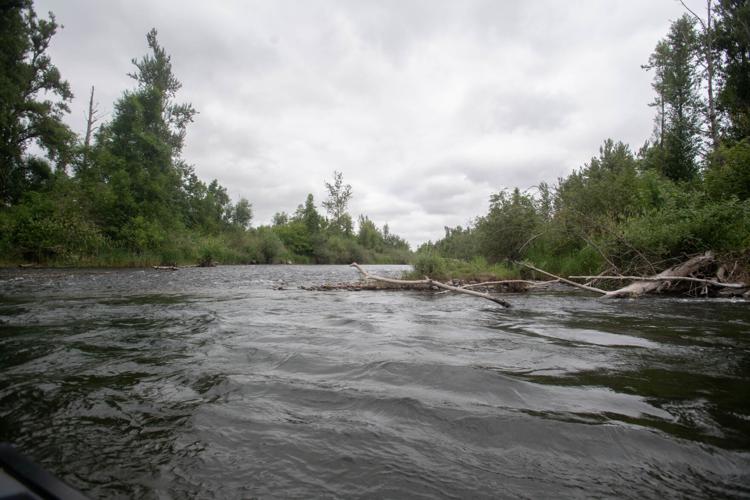 Water temperatures are still cold enough to send a swimmer's body into shock. 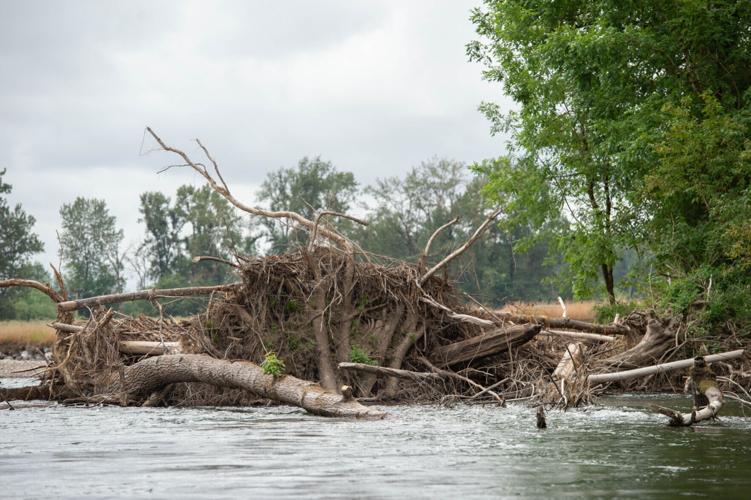 The Oregon State Marine Board has a Boating Obstruction Reporting Tools dashboard that offers information and pictures of current river hazards such as log jams and strainers. 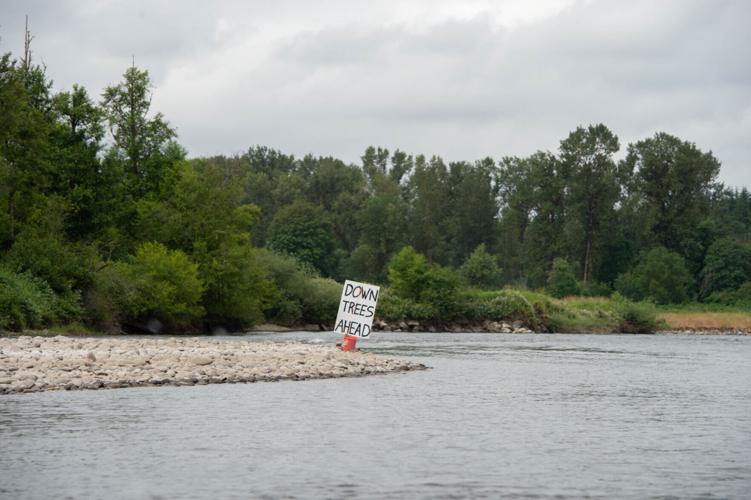 A sign warning boaters of fallen trees in the Santiam River was put up by community members.

Temperatures are rising, and it feels like summer has finally arrived to the mid-Willamette Valley. A popular way to beat the heat is to spend time on the river.

But how safe are the local rivers? Fire officials say there are plenty of hazards river-goers need to be mindful of.

“When people go swimming, they can go into shock,” Benton County Sheriff’s Lt. Toby Bottorff said. “If you don’t have a life jacket on, it’s going to be a lot harder to get one on when your body is in shock or experiencing hypothermia.”

Bottorff is in charge of the department's marine deputies. The marine deputy program is seasonal and generally runs from May to mid-September.

Jefferson Fire District Division Chief Louis Gisler echoed Bottorff in saying the water is still cold enough to be dangerous. He anticipates the water temperatures will increase once the water levels go down.

Life jackets are a must

One of the easiest ways to stay safe on the rivers is to wear a life jacket. Not only is it the law in some cases, but it’s a preventive measure that pays off.

“Over the years, I would say in at least 90% of drownings, people did not have life jackets,” Bottorff said.

Throughout his years on the job, Bottorff said pulling deceased people out of the water has made an impact on him.

“It brought home the fact that it’s really important to wear that life jacket,” he said.

Depending on someone’s age and the type of boat they are on, not wearing a life jacket can be costly in more ways than one.

“Word spreads around when we’re out giving tickets,” Bottorff said. “But we don’t care about the money; we care about compliance and people being safe.”

Even if you have a life jacket, if it doesn’t fit properly, it’s not going to do its job, Gisler said.

One of the problems he sees out on the river is people not wearing the proper size. For example, a child should not be wearing an adult life jacket.

To find out more about life jacket regulations and safety tips, go to the Oregon State Marine Board website.

River users can also tap local agencies' stashes if they don’t have their own life jackets. For example, Albany Fire Department, the Osborn Aquatic Center and Lebanon Fire District all have life jacket loaner programs.

Water rescue officials say one of the most important tips for safe river usage is knowing the water. Just because someone has floated the same river for years doesn’t mean new hazards or flow patterns aren’t safety threats.

In late April, two kayakers from Eugene went missing on the Long Tom River near Monroe and were ultimately found deceased. Although it’s unclear exactly what happened, officials said their deaths appeared to be water-related.

“Make sure you have a plan,” Bottorff said. “Be familiar with the river you’re using. Scout the river for hazards beforehand.”

Knowing what to expect on the river before floating on it is crucial, but knowing your own abilities is just as important.

He added that the water is always going to be dangerous, regardless of conditions or someone’s experience level.

“People assume because they’re on a float or inner tube that they can kick and move and outwork the water,” Gisler said. “Water does not get tired.”

Hazards on and beneath the surface

Water levels are expected to retreat and river temperatures should increase in the coming weeks, but dangers still exist.

The Oregon State Marine Board has a Boating Obstruction Reporting Tools dashboard that offers information and pictures of current river hazards, such as log jams and strainers.

For example, the North Santiam River has a major log jam across the river, a few miles downstream of Buell Miller.

This log jam can’t be removed due to a fish habitat, Gisler said. If someone finds themselves encountering the log jam, they’ll be stuck.

As the water levels begin to recede, Gisler said some areas of the river will become unpassable. This is why he suggests checking on river conditions before floating.

Between log jams, strainers and a swift-moving river, hazards can catch unprepared floaters and boaters off guard. A healthy fear of the water is necessary, according to Gisler.

“If you’re not afraid of the water, you shouldn’t be in it,” he said. “People need to respect it.”

No power at Reser, for 6,500 customers ahead of Oregon rivalry game

Editor's note: This is a developing story.

Corvallis candlemaker's business is 'on fire'

After working at a law firm for a bit after graduation, she decided her time would be better spent pursuing her real passion.

It turned out, it wasn't exactly a gun, even though it looked like one.

The Oregon State Board of Nursing placed an Albany nurse’s license on probation for two years after he was reportedly terminated for on-the-job impairment.

Manju Bangalore isn’t just another pretty face: the actor and model is a multitalented pageant winner and scientist hoping to reach new heights on earth and beyond.

It works so well, they landed a U.S. patent.

Highway 34 near Corvallis closed due to crash, downed power lines

Highway 34 was closed 1 mile east of Corvallis at Electric Road on Monday morning, Nov. 21 due to a crash, an Oregon Department of Transportation news release said.

Linn County Sheriff's deputies have arrested an Albany man on suspicion of an assault with a weapon.

Division Chief for the Jefferson Fire Department Louis Gisler points to an area of the Santiam River that has recently changed routes due to heavy rainfall.

Water temperatures are still cold enough to send a swimmer's body into shock.

The Oregon State Marine Board has a Boating Obstruction Reporting Tools dashboard that offers information and pictures of current river hazards such as log jams and strainers.

A sign warning boaters of fallen trees in the Santiam River was put up by community members.