Oregon State's Cooper Hjerpe was named the national pitcher of the year by Perfect Game/Rawlings and the College Baseball Foundation. Hjerpe finished the 2022 season with an 11-1 record and a 2.53 ERA. He also set the Oregon State single-season record with 161 strikeouts.

Hjerpe is a finalist for the Golden Spikes Award and Dick Howser Trophy, which are both given to the nation’s top player.

For Hjerpe and Melton, it is the second All-America honor following first-team selections by Collegiate Baseball. For Boyd, it is his first career All-America recognition.

Melton was also named an ABCA first-team all-region selection. The Pac-12 Player of the Year, he batted .360 with 17 home runs, 22 doubles and 83 RBIs, which tied Adley Rutschman (2018) for the most in a single-season by a Beaver. He also swiped 21 bases and scored 66 runs.

Boyd led the Beavers with a .373 batting average, adding 14 doubles, four triples, nine home runs and 53 RBIs. He led Oregon State and the Pac-12 with 24 stolen bases, which rank tied for seventh in a single season at Oregon State. Boyd was also named all-region second team by the ABCA on Wednesday.

Bazzana batted .306 in his first season in Corvallis, collecting 16 doubles with four triples, six home runs and 44 RBIs while stealing 14 bases. He’s also been recognized by Collegiate Baseball and the NCBWA.

Kmatz posted an 8-2 record in his first season as a Beaver, posting a 4.19 ERA while limiting opponents to 73 hits in 77⅓ innings with 65 strikeouts. The honor is the second for Kmatz, who was also recognized by Collegiate Baseball.

Right-handed pitcher Ben Ferrer, who was 4-0 with a 1.72 ERA and three saves, was also named an all-region first-team selection by the ABCA. He held opponents to a .176 batting average and struck out 78 in 62⅔ innings.

Right-handed pitcher Mitchell Verburg, who was one of 10 finalists, also earned first-team All-America honors by the Senior CLASS Award on Wednesday. Verburg’s collegiate career came to a close Monday, and he was 9-3 with a 3.27 ERA in 74 appearances, which included one start. He also tallied seven career saves. 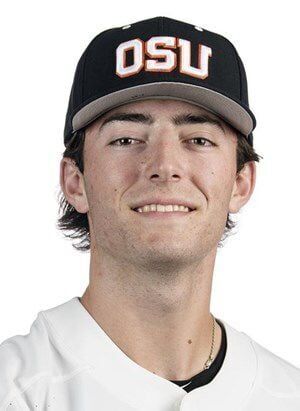 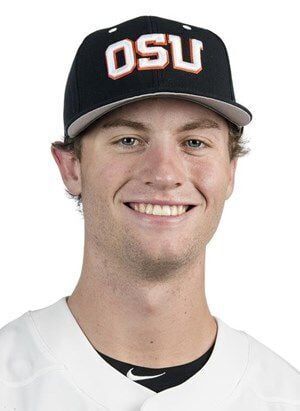