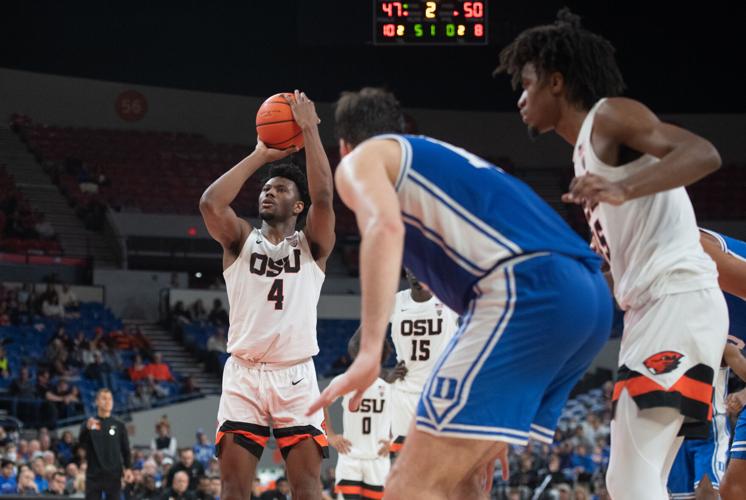 Oregon State's Dexter Akanno (4) had 12 points and was 4 of 6 at the free-throw line Thursday in the Beavers' 54-51 loss to Duke at the Phil Knight Legacy tournament in Portland. 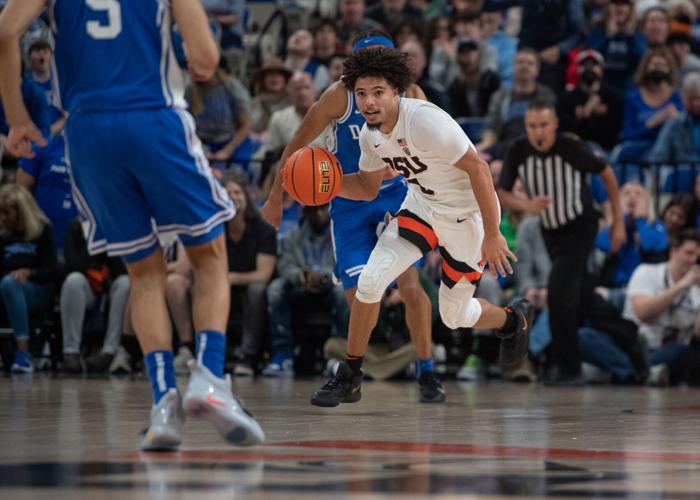 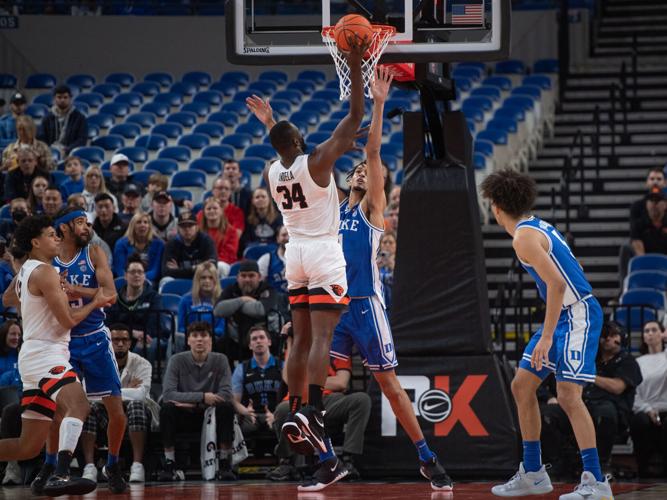 Oregon State's Rodrigue Andela (34) scores in the first half. The senior forward had six points and five rebounds off the bench. 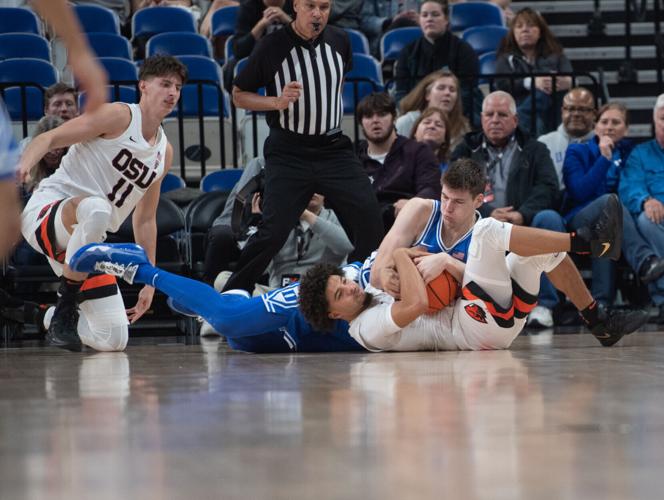 Oregon State's Jordan Pope (white) wrestles with Duke’s Kyle Filipowski (blue) for a jump ball. Filipowski had a game-high 19 points and five of the Blue Devils' 22 offensive rebounds among his 14 total boards.

PORTLAND — A valiant performance in what Oregon State coach Wayne Tinkle called one of his program’s best defensive efforts in a while Thursday afternoon just wasn’t enough.

Too many second-chance opportunities for No. 8 Duke and not enough offense for the Beavers.

Oregon State frustrated the blue-chip Blue Devils into 16-of-60 shooting from the floor. But it was 22 offensive rebounds and 18 points off those extra chances that proved to be a big factor in Duke’s 54-51 win in the opener of the Phil Knight Legacy men’s basketball tournament at Veterans Memorial Coliseum.

“Proud of our guys. It was a hell of an effort. But obviously we’re very disappointed that we didn’t come out with a win,” said Tinkle, whose team was coming off a home loss to Portland State five days earlier in a game that was far from a complete effort. “This young group, we challenged them, told them it was going to be a fight and they were willing to accept it, and I thought battled their tails off.”

Both teams struggled on offense down the stretch, but it was Duke (5-1) that came up with a pile of offensive boards to extend possessions. Despite shooting 6 of 29 in the second half, the Blue Devils came up with 13 offensive rebounds after halftime.

Jordan Pope had 14 points, five rebounds, two assists and two steals to lead Oregon State (3-2), which will try to bounce back Friday with a 3 p.m. tipoff at Moda Center against the loser of Thursday’s later game between Florida and Xavier. The Beavers will also play a Sunday game at University of Portland’s Chiles Center.

Pope, a true freshman point guard, was asked how he’ll personally build off another strong game, his fifth in double-figure scoring in as many games this season.

“Keep relying on my teammates to give me confidence. Be myself. Let coach Tinkle push me, let me teammates push me,” Pope said. “Take the good from the game and apply it to the next game and work on stuff I might have made a mistake on and just move forward. Just keep being myself and playing with confidence.”

Pope sparked a 6-0 run to open the second half as the Beavers turned a two-point deficit into a four-point lead.

The freshman point guard scored off a steal in transition and hit a jumper to sandwich a pair of free throws by teammate Chol Marial.

In the meantime, Duke came out of halftime missing its first nine shots to get to 10 of 40 for the game.

OSU would hold the lead and continued to flex its defensive strength. Bilodeau scored inside on a step-through move to put the Beavers up six and fellow freshman forward Tyler Bilodeau blocked Duke 7-footer Kyle Filipowski to force a jump ball.

OSU came out of that stretch with a six-point lead, but Duke soon gathered momentum to regain the edge.

The Beavers missed five straight field goal attempts before Pope found Andela for a layin to close end a 6-0 Blue Devils run and close the deficit to one with 5:03 left.

But OSU couldn’t muster a push to get back in front.

Akanno later closed the gap to one on a pair of free throws, but he missed from the front end of a 1-and-1 opportunity with 55 seconds left that could have put the Beavers in the lead with two makes.

Filipowski got an offensive follow and Akanno answered with two more at the line with 16 second to go.

Duke’s Jacob Grandison made two foul shots with 16 seconds remaining, and on the other end Pope and Taylor missed potential game-tying 3-pointers before time expired.

Despite the result, Akanno said he was encouraged by the result.

“Everybody gave it their all,” the junior guard said. “That’s all we ask for on a day-to-day basis. Going into practice, going into games, and especially this one.”

But with the loss, Tinkle wasn’t ready to call it a step forward for his team.

“The big test now is how do we respond,” the Beavers’ ninth-year head coach said. “If we’ve got anybody feeling sorry for themselves or we can going to wake up, take the game plan and not get after it tomorrow. That’s the challenge. We need to be patient, but we also know we need to move this group forward.”

Gill Coliseum was packed to the rafters for Thursday’s women’s basketball game between Oregon State and Southern University.

Oregon State went on a 19-6 run in the third quarter to take control against Jackson State on Saturday afternoon in a nonconference women’s basketball game at Gill Coliseum.

Cheered on by thousands of students, Oregon State dominated Southern 89-36 on Thursday at Gill Coliseum.

Wayne Tinkle said his team took another step forward Thursday night in understanding what it needs to do and be to find success.

USC outscored Oregon State 21-13 in the final six minutes to complete the comeback for a 63-62 win in a Pac-12 men’s basketball game at Galen Center in Los Angeles.

Sunday’s game at USC marked the second time in as many contests that Oregon State saw a double-digit lead completely disappear.

PORTLAND — “It came down to, really, who wanted it more,” Oregon State men’s basketball coach Wayne Tinkle said late Sunday night after a second loss in eight days to the Big Sky Conference’s Portland State. “You add the fact that they did from the jump, and then we found a group that responded. We’re just not there yet. We’re a long ways off.”

Kennedy Brown and Jelena Mitrovic have spent many hours battling in the post against each in practice over the years.

Oregon State's Dexter Akanno (4) had 12 points and was 4 of 6 at the free-throw line Thursday in the Beavers' 54-51 loss to Duke at the Phil Knight Legacy tournament in Portland.

Oregon State's Rodrigue Andela (34) scores in the first half. The senior forward had six points and five rebounds off the bench.

Oregon State's Jordan Pope (white) wrestles with Duke’s Kyle Filipowski (blue) for a jump ball. Filipowski had a game-high 19 points and five of the Blue Devils' 22 offensive rebounds among his 14 total boards.