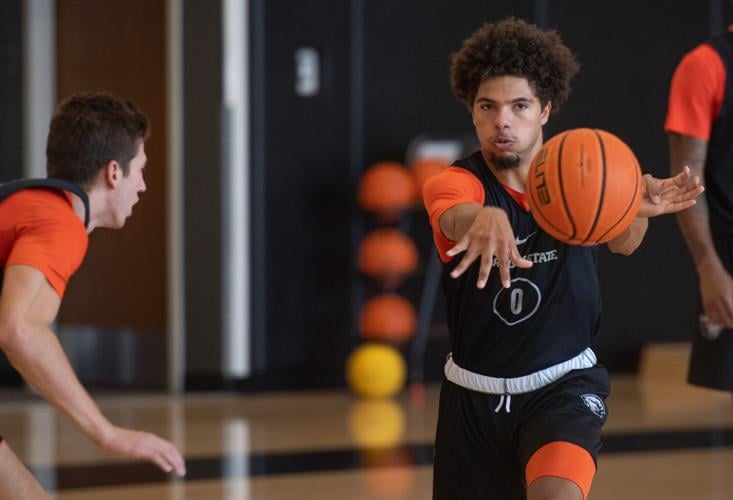 Oregon State freshman Jordan Pope is a point guard who has displayed long-range shooting abilities in recent practices. He chose OSU because he believes it's a good place to thrive and develop his game. 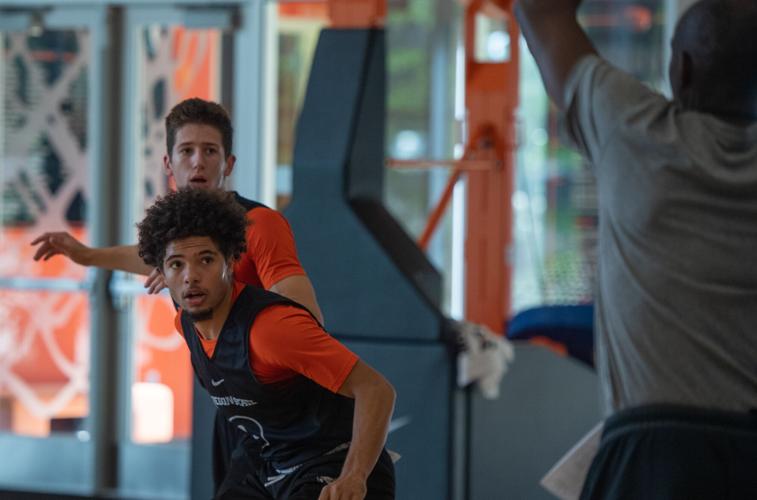 Freshman Jordan Pope watches assistant athletic director Stephen Thompson as he prepares to throw a ball in for a drill. Behind Pope is fellow newcomer Nick Krass. 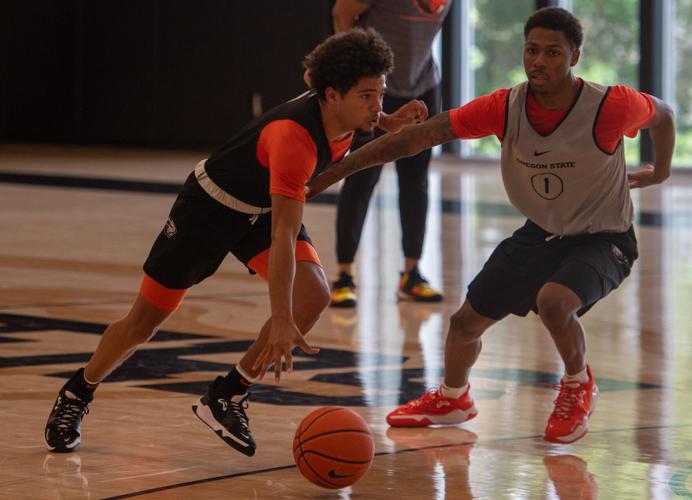 Jordan Pope has been influenced through basketball by his father and two brothers, who all played collegiately at some level.

Pope watched them closely on the court and idolized them as players. He tried to mimic everything they did, and they encouraged him to continue improving and chase his dreams.

He’s doing that now as he begins his college career on the Oregon State men’s basketball team.

While his father and brothers have had a significant impact on his development into a Division I player, it was Pope’s oldest brother, Rodney, in particular who inspired him by teaching him work ethic and mentality.

“So as I grew up, I keyed in on being a dawg and (understanding) without the work, there’s not going to be any result,” Pope said. “Everyone can be God-blessed with talent, but what are you going to add to that?”

A 6-foot-2, 165-pound freshman guard from Oakley, California, in the north Bay Area, Pope considers himself a “combo point guard,” and he understands the confusion in that statement.

“On offense I can get guys open and make life easy for other people,” he said. “But also if I need to I can get my own shots, create shots and put pressure on the defense.”

One of eight first-year scholarship players with the Beavers, Pope said OSU has felt like home since the program started recruiting him.

He knew he wanted to stay on the West Coast, having grown up a fan of multiple Pac-12 schools, including Oregon State as well as California in Berkeley, about 40 miles southwest of his hometown.

Beavers coach Wayne Tinkle said at the time of Pope’s signing in April that Pope is a “true leader” at point guard and plays with a passion that will make Oregon State fans proud.

“He brings a level of competitiveness on both ends of the floor that sets the tone for the team. He's not afraid to guard the opponent's best players and never backs down from a challenge,” Tinkle said. “Offensively he is a willing playmaker who can also shoot and score the ball.”

Pope spent the past three years at Prolific Prep in Napa. He considers the move one of the best decisions of his life because the high-level competition he faced helped prepare him for college and the moment he finds himself in now.

He decided Oregon State would be a good fit because of what he heard from the coaches.

“They put out a foundation and a blueprint that I can envision myself being successful in, and I think it was just a great environment to develop my game and develop as a person as well,” Pope said.

His recent focus has been on getting bigger and stronger in an effort to help absorb the impacts of the physicality at the college level.

On the court, Pope has shown off his long-range shooting ability in recent practices as the Beavers get ready for a trip to Italy that will include three games in a two-week span.

New teammate and fellow OSU newcomer Christian Wright has seen what Pope can do putting the ball up from deep.

“A sniper, a sharp-shooter. You can’t leave him open, he’s going to make the shot,” Wright said. “Good guard, good shot-maker and smart player, especially coming in as a freshman. He’s definitely going to be impressive this year and he’s going to impress a lot of people.”

Defensively, Pope said some people consider him a smaller guard but that he makes up for his size on that end of the court with heart and has never been a liability. He plans to continue improving and be a factor for his new team.

Off the court, the business major wants to stay ahead in the classroom and make sure he’s handling that part of being a student-athlete.

Come this winter, he just wants to win games as the Beavers try to rebound from a five-win season.

Tyler Bilodeau has athletics in his blood.

College basketball provides a challenge that Nick Krass says he’s ready to take on as he makes the transition from the high school game.

Dzmitry Ryuny left a place where he felt he wasn’t valued as he was in the past and looked for somewhere new.

Christian Wright had no hard feelings when it didn’t work out after one season at the University of Georgia.

The size of Corvallis, with about one-eighth the population of Jayden Stevens’ hometown of Spokane, Washington, didn’t push him away from pursuing Oregon State as a place to begin his college basketball career.

Oregon State freshman Jordan Pope is a point guard who has displayed long-range shooting abilities in recent practices. He chose OSU because he believes it's a good place to thrive and develop his game.

Freshman Jordan Pope watches assistant athletic director Stephen Thompson as he prepares to throw a ball in for a drill. Behind Pope is fellow newcomer Nick Krass.