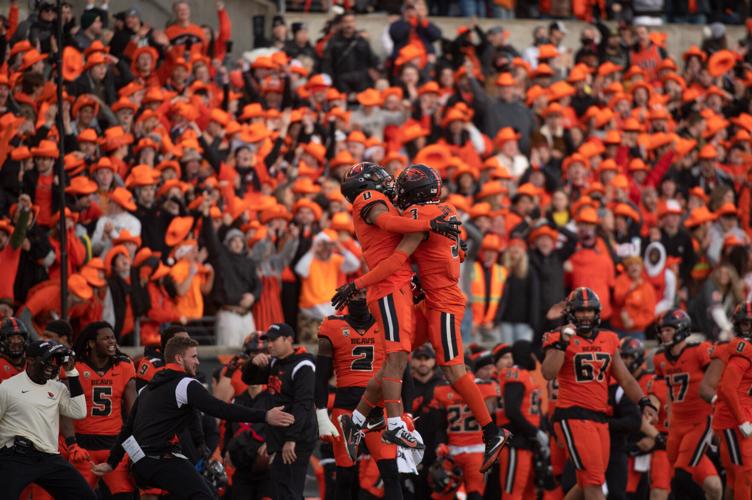 Oregon State defensive backs Akili Arnold (0) and Jaydon Grant (3) celebrate after making a stop on fourth down in the fourth quarter of the Beavers' 38-34 win over Oregon on Saturday at Reser Stadium. 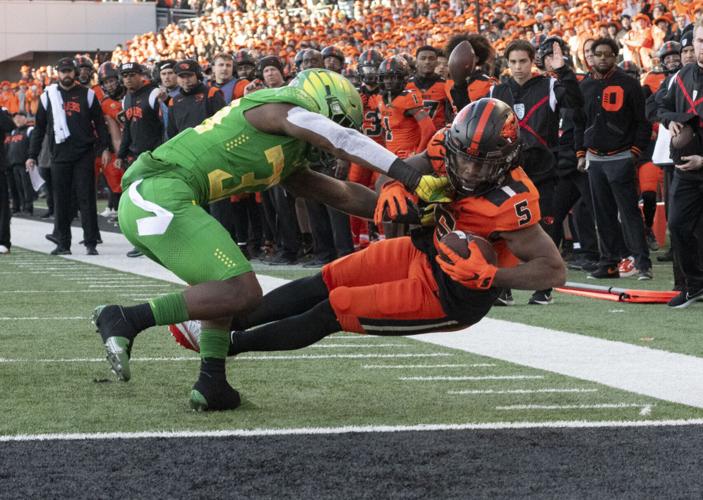 Oregon State running back Deshaun Fenwick (5) scores a touchdown during the rivalry game against Oregon on Saturday. Fenwick helped Oregon State grind out 268 rushing yards in the victory. 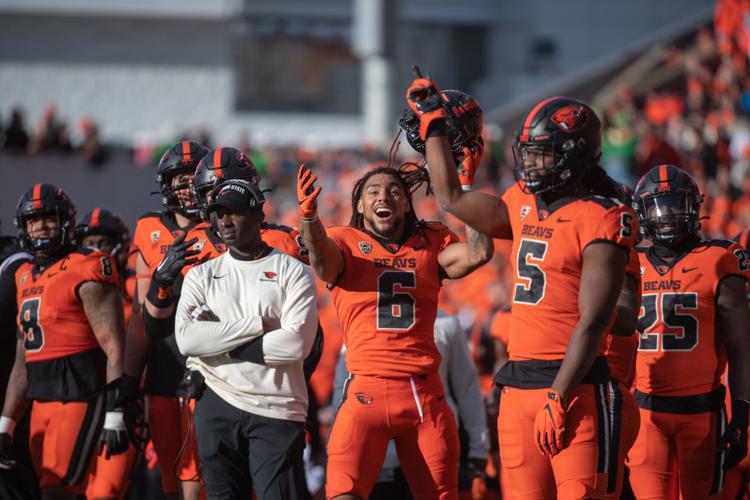 Oregon State players react to a replay of a third-down spot that didn't go their way late in the first half. The officials reviewed and confirmed the spot.

Oregon State rallied from a 34-17 deficit to defeat No. 10 Oregon 38-34 on Saturday at Reser Stadium in a game which lived up to the best of this rivalry’s long history.

Oregon scored 24 unanswered points in the second and third quarters and appeared to be fully in control before the Beavers turned the game around with a series of big plays. The loss may knock the Ducks out of the Pac-12 Conference championship game, depending upon the result of the Washington at Washington State game Saturday night.

For the 22nd-ranked Beavers (9-3, 6-3 Pac-12), the victory keeps alive the possibility of a rare 10-win season. Both teams will learn their bowl destinations on Sunday, Dec. 4, but first, here are three thoughts on the Beavers’ historic victory.

Oregon State got off to a strong start and held a 10-7 lead deep into the second quarter. But the game seemed to change momentum just before the half when a questionable spot by the officials on a potential first down was followed by a failed fourth-down attempt by the Beavers at the Oregon 5. After taking over on downs, the Ducks marched down the field on a 13-play, 95-yard scoring drive to take the lead.

Oregon (9-3, 7-2) then took advantage of two OSU turnovers in the third quarter to take a 31-10 lead. With Oregon State’s passing game largely ineffective, a comeback in the remaining time seemed unlikely.

And it wasn’t just the scoreboard which was tilted in Oregon’s favor. For the game, Oregon out gained Oregon State 470 yards to 328 including a 327-60 advantage in passing yards. The Ducks had 27 first downs to 19 for the Beavers. And Oregon State had three turnovers and Oregon none (which is technically true, but not the whole story).

Despite all of that, the Beavers continued to play hard on defense, offense and special teams, and ultimately the tide turned.

One reason Oregon State was able to overcome the three turnovers was by making big plays on special teams. A 48-yard kickoff return by Silas Bolden gave the Beavers a short field for a scoring drive which cut the deficit to 34-24.

Oregon State forced a three-and-out on the next Ducks drive. Oregon punter Alex Bales muffed the snap and the Beavers tackled him at the 2. That set up another quick touchdown for Oregon State as quarterback Ben Gulbranson scored on a quarterback sneak.

Oregon State had one more special teams play go its way late in the game. A kickoff by Everett Hayes bounced just short of the goal line and forced Oregon returner Kris Hutson to attempt the return. He was brought down at the 10, setting up one of the key sequences in the game.

In addition, a 50-yard field goal by Hayes in the first quarter helped stake the Beavers to the early lead.

That late drive by the Ducks in their own territory ended up in a fourth-and-1. The Ducks chose to go for it and Oregon State safety Jaydon Grant stopped quarterback Bo Nix short of the first down, giving the Beavers possession at the Oregon 28. This is one play fans of both teams will long remember when thinking back to this edition of the rivalry.

Once again gifted a short field, the Oregon State offense pounded the ball into the end zone with Isaiah Newell scoring on a 6-yard run to give the Beavers a 38-34 lead.

Oregon went for it on fourth down five times on Saturday and the Oregon State defense held them without a conversion each time. These plays deeply shaped the outcome of the game. The Ducks passed up opportunities to attempt field goals in the first half and the final fourth-down attempt was one of the decisive plays of the game.

Trailing late, Oregon faced a fourth-and-goal at the 3. Nix’ pass into the end zone was incomplete and the Beavers took over on downs and were able to run out the clock.

It was a gutsy performance by an Oregon State defense which played better than the scoreboard showed as two OSU turnovers led directly to 10 Oregon points during the Ducks’ big run.

NEXT: Bowl matchups will be officially announced on Dec. 4.

Oregon State defensive backs Akili Arnold (0) and Jaydon Grant (3) celebrate after making a stop on fourth down in the fourth quarter of the Beavers' 38-34 win over Oregon on Saturday at Reser Stadium.

Oregon State running back Deshaun Fenwick (5) scores a touchdown during the rivalry game against Oregon on Saturday. Fenwick helped Oregon State grind out 268 rushing yards in the victory.

Oregon State players react to a replay of a third-down spot that didn't go their way late in the first half. The officials reviewed and confirmed the spot.