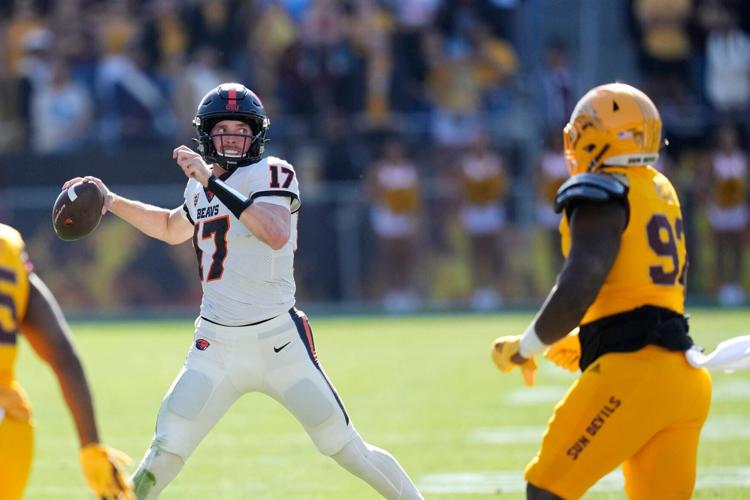 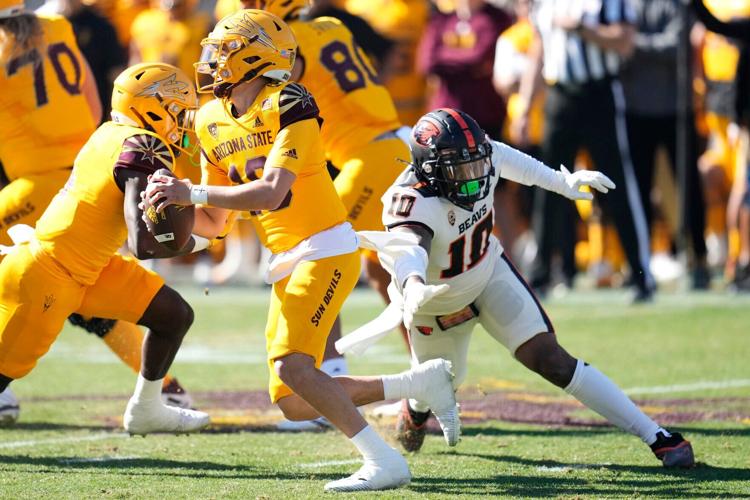 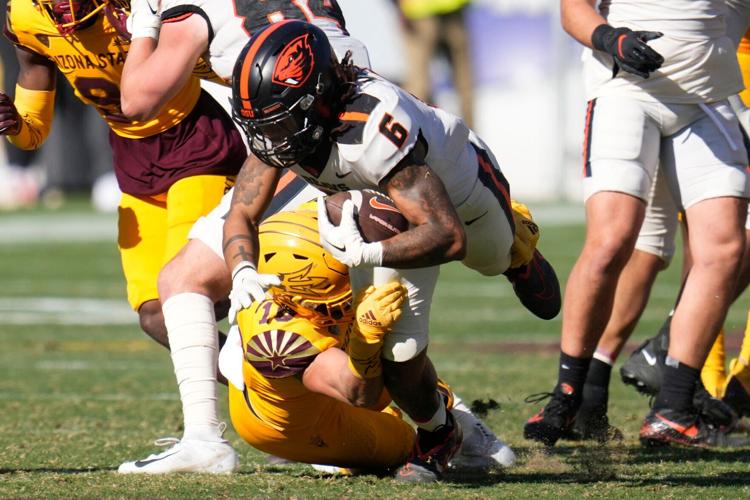 Oregon State running back Damien Martinez (6) gets tackled by Arizona State linebacker Connor Soelle during the second half. Martinez went over 100 yards for the fifth consecutive time this season.

There were several potential reasons to worry about No. 25 Oregon State having an off day Saturday at Arizona State. The Beavers might have looked past the Sun Devils in anticipation of next week’s rivalry game against No. 12 Oregon. The Beavers also went into the game with a hideous road record in the series, going 1-19 against the Sun Devils in Tempe since 1972.

None of that mattered as the Beavers took control of the game with a touchdown on their opening drive and went on to a convincing 31-7 victory. The win assures the team of its first eight-win season since 2012 and keeps alive the possibility of the third 10-win season in program history.

To reach that goal, the Beavers will have to defeat rival Oregon next week in what will be a Top 25 matchup in Corvallis. Before turning our attention to rivalry week, here are three takeaways from the win over Arizona State.

The outcome of the game never felt in doubt because the Oregon State defense was in control throughout. The Beavers gave up one touchdown drive late in the second quarter and then shut out the Sun Devils in the second half. Oregon State had a massive advantage in total yards, 443 to 276.

Despite the absences of Grant and Austin, the Beavers limited Arizona State quarterback Trenton Bourguet to 122 yards passing on 32 attempts. OSU won the battle on third down, as the Sun Devils converted just 5 of 14 and were 2 for 4 on fourth down.

The Beavers were credited with just one sack (by Easton Mascarenas-Arnold) but that doesn’t reflect the amount of pressure they put on Bourguet. OSU also recorded five quarterback hurries and that pressure was a big part of the defense’s success on third down.

Quarterback Ben Gulbranson had one of his best games. He completed 15 of 21 attempts for 188 yards with one touchdown and no interceptions. Offensive coordinator Brian Lindgren called passes on the Beavers’ first three plays from scrimmage and Gulbranson completed two throws to Tyjon Lindsey and one to Jack Velling.

Gulbranson went 5 for 5 on that game-opening touchdown drive and played with confidence the rest of the way. He continued to throw the ball well on the back-to-back touchdown drives in the third quarter that put the game out of reach.

He also ran the ball effectively, making good decisions on when to tuck the ball away and gain a few positive yards rather than forcing a pass. He ran for 36 yards on nine carries and scored an 8-yard touchdown in the third quarter on a quarterback draw.

Gulbranson doesn’t need to run the ball regularly, but a few scrambles a game gives defenses one more thing to think about.

Freshman running back Damien Martinez ran for 138 yards on 22 carries with two touchdowns. This is his fifth consecutive 100-yard game, the most by any OSU player since Steven Jackson posted six straight 100-yard games in 2003.

Martinez’ emergence is of added importance because of the injuries in the OSU backfield. Deshaun Fenwick was once again held out, Trey Lowe is being worked back into the rotation slowly and had no carries on Saturday, and Jam Griffin was knocked out of the game with an ankle injury. There was a time when Martinez was a luxury in a deep group. Now he is becoming a workhorse back.

Redshirt freshman Isaiah Newell looked good in training camp and with the reduced depth at that position he may have to take on a bigger role over the final games of the season.

Editor's note: This item has been updated as information became available.

OSU football: Beavers made plays on fourth down and special teams in win over Ducks

Oregon State rallied from a 34-17 deficit to defeat No. 10 Oregon 38-34 on Saturday at Reser Stadium in a game which lived up to the best of this rivalry’s long history.

OSU football: Beavers take next step in rebuild of the program

With one last kneel-down, Oregon State coach Jonathan Smith could let it all out. So, too, could the other coaches, players and fans.

CORVALLIS — Isaiah Newell ran for the go-ahead touchdown with 8:11 remaining, and No. 22 Oregon State took advantage of critical mistakes in the fourth quarter by No. 10 Oregon to rally for a 38-34 victory on Saturday.

Commentary: Pac-12 officiating once again in the (bad) spotlight

Trent Bray received a contract extension that takes him through the 2024 season.

Emotions always run high during the week of the Oregon/Oregon State rivalry game. It is the final game of the regular season, the opponent is the in-state rival and this year there is a lot on the line for both teams.

OSU football: 'Explosive' Oregon offense the next challenge for Beavers

It will be strength on strength when Oregon has the ball Saturday afternoon at Reser Stadium.

It’s no coincidence that the Oregon State offense has found some traction the past two weeks as quarterback Ben Gulbranson continues to get more comfortable and in a groove as the starter.

Oregon State coach Jonathan Smith confirmed Monday that Ben Gulbranson will be the starting quarterback for the rest of the season.

OSU football: An improved defense is evident on the field, by the numbers

Oregon State has largely the same veteran group filling key defensive roles as it did in 2021, but the overall statistical numbers are better this season.

Oregon State running back Damien Martinez (6) gets tackled by Arizona State linebacker Connor Soelle during the second half. Martinez went over 100 yards for the fifth consecutive time this season.