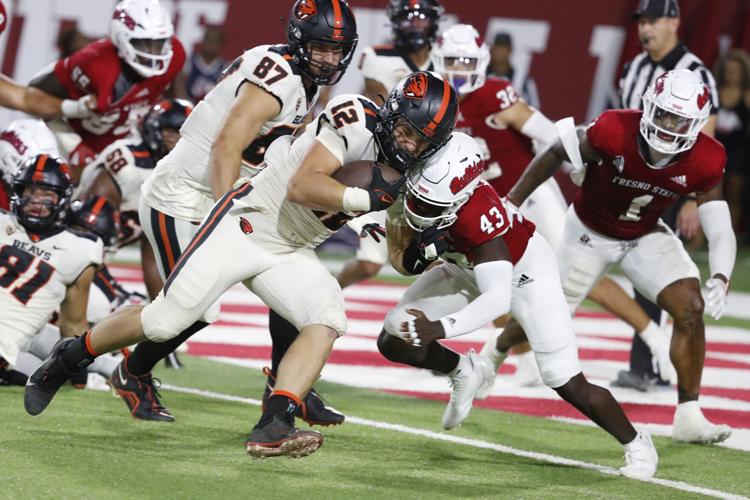 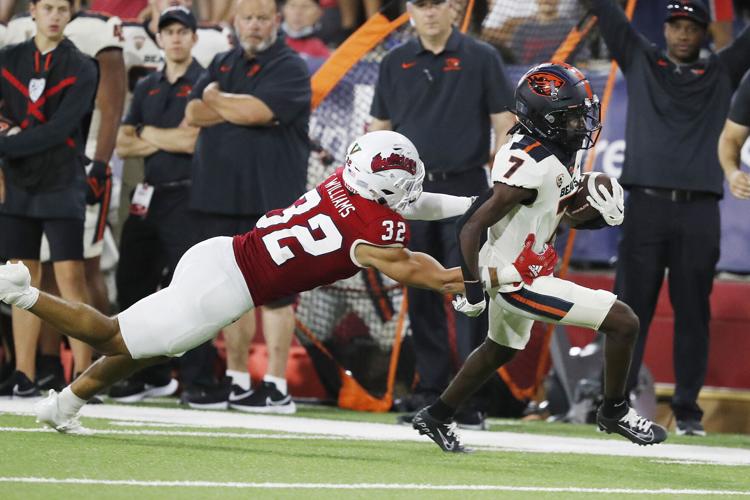 Jack Colletto scored a touchdown on the final play of the game to give Oregon State a 35-32 win at Fresno State on Saturday night in a nonconference football game.

The Beavers trailed 32-29 with 3 seconds left on the clock and the ball at the Bulldogs’ 2-yard line. Oregon State coach Jonathan Smith had the option of sending out the field-goal unit and playing for overtime, but elected to put the ball in the hands of his versatile redshirt senior.

Colletto took the direct snap and found space on the right side of the offensive line. Tight end J.T Byrne made his block to secure the edge and Colletto bowled over a Fresno State defender at the goal line.

The victory is the first in program history for Oregon State at Fresno State. The Beavers were 0-6 in road games against the Bulldogs entering Saturday night’s game.

The Beavers (2-0) got off to a strong start, taking the lead midway through the first quarter on a 2-yard scoring run by Colletto. The Bulldogs answered, tying the game on a 42-yard run by Jordan Mims.

Oregon State regained the lead in the second quarter on a five play, 80-yard drive. Deshaun Fenwick and Damien Martinez ran the ball effectively and Anthony Gould got past a defender and drew a defensive pass interference call.

Oregon State sophomore receiver Silas Bolden capped the drive with a 36-yard touchdown run on an end-around. That gave the Beavers a 14-7 lead with 8:57 left in the second quarter.

Fresno State dominated possession for the rest of the half and through much of the third quarter. The Bulldogs kicked two field goals late in the second quarter to cut the lead to 14-13 at halftime.

Fresno State kicked a field goal on its first possession of the second half to take the lead, 16-14. The Bulldogs forced Oregon State to punt on the next possession and then drove for a touchdown to stretch their lead to 23-14.

It appeared the hosts had taken control of the game, but the Oregon State offense stepped up on its next drive. Quarterback Chance Nolan found Gould for a 42-yard gain on first down and four plays later Fenwick pushed into the end zone for a 4-yard scoring run to cut the Beavers’ deficit to two points, 23-21.

Fresno State kicked another field goal early in the fourth quarter to stretch its lead to 26-21.

The final minutes of the fourth quarter were an offensive frenzy as both defenses began to sag at the end of a very warm night. Oregon State took the lead with just under two minutes left to play on a 17-yard catch and run by Tre’Shaun Harrison. The wideout caught a flanker screen on the right side and cut across the middle, eluding multiple defenders on his way into the end zone. Bolden caught a pass from Nolan for the two-point conversion and the Beavers took a 29-26 lead.

That set up the Beavers’ game-winning drive. Nolan connected with Harrison on two passes to get the drive going and then found Jesiah Irish for a 23-yard gain. On the next play, Nolan completed a 28-yard pass to tight end Luke Musgrave.

A defensive penalty in the end zone gave Oregon State the ball at the 2, setting the stage for Colletto’s scoring run.

OSU football: Three thoughts on the Beavers' loss at Utah

The Oregon State football team fell to 0-2 in Pac-12 Conference play with a 42-16 loss at No. 12 Utah on Saturday. The Beavers drew a tough opening slate in conference play and over the past two weeks have shown the ability to compete at the highest level.

Utah’s defensive numbers speak for themselves.

CEDAR FALLS, Iowa — Is this real?

OSU football: Practice will determine if Nolan starts at Stanford

Oregon State football coach Jonathan Smith said Monday the team will see how quarterback Chance Nolan responds in practice this week before making a decision about who will start on Saturday when the Beavers play at Stanford.

OSU football: Offense looking in the mirror to correct mistakes of past two games

Taking on quality opposing defenses the past two games has given Oregon State’s offense some mistakes to learn from and improve on going forward.

OSU football: Transfer RB Griffin making the most of his opportunities

Having his parents in the Reser Stadium stands for the first time last Saturday night provided Jam Griffin with a little more motivation, or “edge” as the Oregon State redshirt sophomore running back puts it.

Oregon State and No. 7 USC did not play the game the oddsmakers were expecting on Saturday night at Reser Stadium in Corvallis. The over/under for total points entering the game was 69.5, which seemed realistic given that the game featured the top two scoring offenses in the Pac-12 Conference.

OSU football: Slowing down Williams, No. 7 USC next challenge for Beavers

Ready or not, here come quarterback Caleb Williams and the Trojans.

A meeting between a team in college football’s highest division and an opponent that is one of the best in the Football Championship Subdivision always brings intrigue.

OSU football: Defense improves on third down and in the red zone

Last season, Oregon State finished last in the Pac-12 Conference in third-down defense, allowing opponents to convert just over 50% of their third-down plays.