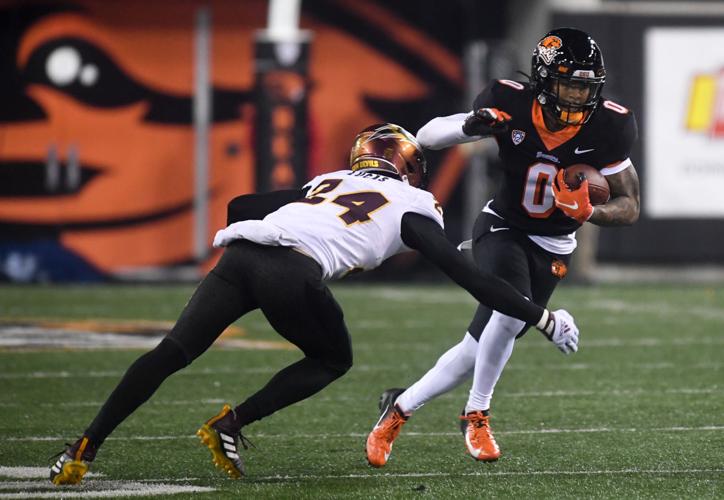 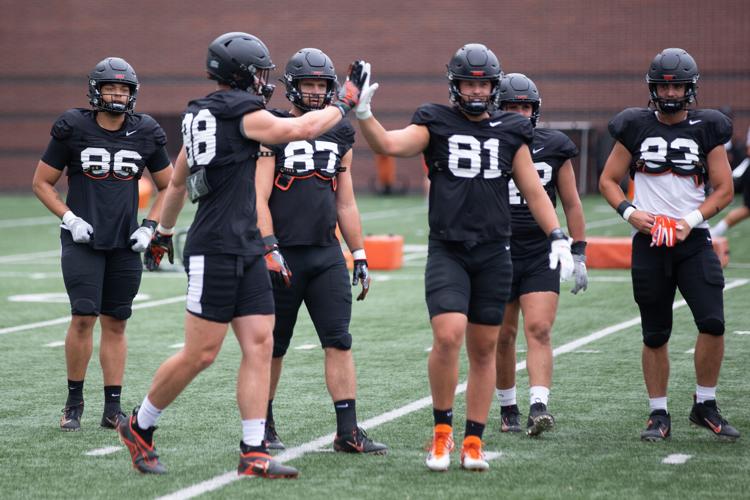 Oregon State's Jake Overman (81) could be among those asked to contribute more this Saturday against Montana State with fellow tight end Luke Musgrave (88) unavailable due to injury.

As the minutes ticked away in the fourth quarter of last Saturday’s game at Fresno State, Tre’Shaun Harrison had faith in Chance Nolan because the Oregon State quarterback had shown before that he could successfully lead the offense.

But Harrison, the Beavers’ leading wide receiver with eight catches through two games, had also maintained confidence in himself because Nolan and OSU coach Jonathan Smith stuck behind him despite some dropped passes early in the season.

That backing played a part as Harrison made a big reception — a 17-yard touchdown grab — with less than two minutes left in the Beavers’ 35-32 win to get to 2-0.

“It means a lot, just knowing that they believe in me to get it done,” said Harrison, a senior in his third season at Oregon State after playing two years at Florida State. “That’s just on me, a lack of focus. I just need to be more locked in to what I need to do, which is catch the ball.”

In an attempt to avoid the dreaded drops, he’s taken extra repetitions before and after practices and worked on watching the ball all the way into his hands.

On the touchdown play, Harrison lined up on the right side and took several steps forward before cutting left, catching a short pass from Nolan and finding room to run thanks to blocks by teammates Anthony Gould, a fellow wide receiver, and lineman Taliese Fuaga.

Harrison then sidestepped one potential tackler and spun away from another while continuing left across the field. He then got one final block from tight end Luke Musgrave that gave Harrison room to find the front corner of the end zone.

A product of Garfield High School in Seattle, Harrison had 35 total touches (29 receptions) for 424 yards and three touchdowns last year. He approached every day this past offseason “doing something to get 1% better, whether that’s routes, catching the rock, route break, route depth, getting with my quarterback, catching balls with him.”

Harrison had trouble with dropped passes in the season opener against Boise State and added another in the first half versus Fresno State. But he says the second half was different because he zeroed in on what he could do to help the team … and had a short memory.

“It’s like a new-play mentality. Knowing that there’s always going to be another opportunity to prove yourself. If there’s not, there’s always next week,” Harrison said. “There’s always something you can work on after the game going into next week’s practices.”

Musgrave suffered an injury in the final minute of the Fresno State game and won’t be available this Saturday against Montana State in Portland. Smith said Monday he is “hopeful to get him back in a few weeks.”

Musgrave leads the Beavers in catches with 11 for 169 yards and a score. But his absence means more opportunities for others, which could include tight end Jake Overman.

Overman, a sophomore, has played in all 22 games in his three seasons with the Beavers. He has one career catch, a 19-yarder against Arizona State as a true freshman in 2020.

Overman said he believes he’s prepared, having worked with Musgrave and Teagan Quitoriano, who has moved on to the NFL.

“My responsibilities are still the same. In the tight end room we’ve all got to step up. Obviously Luke’s a big part of our offense and our tight end room. I think we’ll all step up, including myself. We’ve got young guys ready, so we’re good to go,” Overman said. “We have a great offensive staff and a great tight end coach (Brian Wozniak). Being prepared by coach Woz the last few years has made me ready for this and I’m excited to go.”

The Beavers’ running game is averaging 4.8 yards per attempt, and OSU has allowed just two total sacks in two games.

“We have too many busts here or there or we just need to finish a little bit better. That’s normal, but I think we can play a lot better,” Michalczik said.

Even with a veteran group, the inconsistency can be expected early in the season.

He wasn’t pleased with one missed block in pass protection against Fresno State that caused the Beavers some problems. But he says there have been strides made in protecting the quarterback, a point of emphasis in the offseason.

Michalczik was asked specifically about center Jake Levengood, a redshirt junior who made the move to center after playing primarily at left guard in 2021.

“That’s a hard position to play. We ask him to do a lot of things, to see the whole field, to make a lot of calls and direct the blocking schemes. I think he’s done a great job,” the coach said. “Still a little work in progress to get comfortable at that position. He’s played guard, and I don’t know if his comfort level is there yet but he’s getting better.”

Oregon State and No. 7 USC did not play the game the oddsmakers were expecting on Saturday night at Reser Stadium in Corvallis. The over/under for total points entering the game was 69.5, which seemed realistic given that the game featured the top two scoring offenses in the Pac-12 Conference.

OSU football: Slowing down Williams, No. 7 USC next challenge for Beavers

Ready or not, here come quarterback Caleb Williams and the Trojans.

OSU football: Defense improves on third down and in the red zone

Last season, Oregon State finished last in the Pac-12 Conference in third-down defense, allowing opponents to convert just over 50% of their third-down plays.

OSU football: Transfer RB Griffin making the most of his opportunities

Having his parents in the Reser Stadium stands for the first time last Saturday night provided Jam Griffin with a little more motivation, or “edge” as the Oregon State redshirt sophomore running back puts it.

Oregon State and USC met on the gridiron for the first time in 1914 with the Beavers winning 38-6 in a game played in Tacoma, Washington.

The Oregon State football team accomplished its primary mission in its three nonconference games and is unbeaten going into this week’s Pac-12 Conference opener against No. 7 USC (3-0).

PORTLAND — Oregon State’s return to the Rose City for the first time since 1986 was a triumph. The Beavers scored touchdowns on their first five offensive possessions and ran away with a 68-28 victory over Montana State on Saturday evening at Providence Park.

A meeting between a team in college football’s highest division and an opponent that is one of the best in the Football Championship Subdivision always brings intrigue.

The final minutes of Oregon State’s 35-32 victory over Fresno State on Saturday highlighted the importance of time management in a close game.

The Oregon State defense created five turnovers in a season-opening win over Boise State, but didn’t force any turnovers in Saturday’s win over Fresno State.

Oregon State's Jake Overman (81) could be among those asked to contribute more this Saturday against Montana State with fellow tight end Luke Musgrave (88) unavailable due to injury.