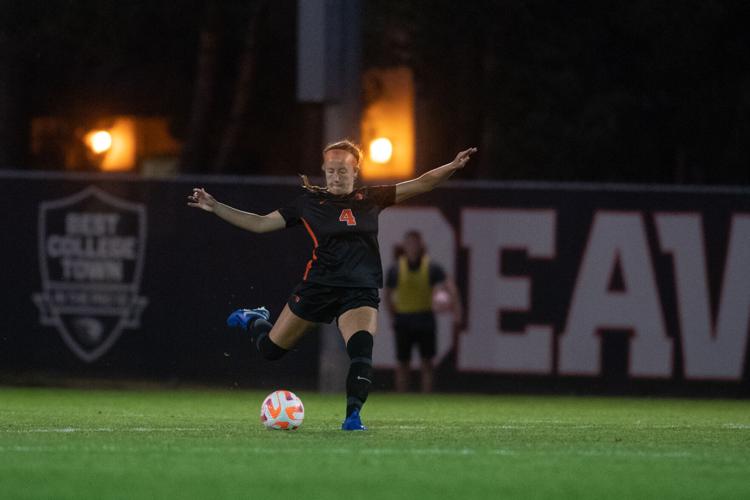 Oregon State defender Reese Moffatt takes a free kick during the Beavers' home game against Boise State. A transfer from LSU, Moffatt has quickly become a foundational piece on the Beavers' back line. 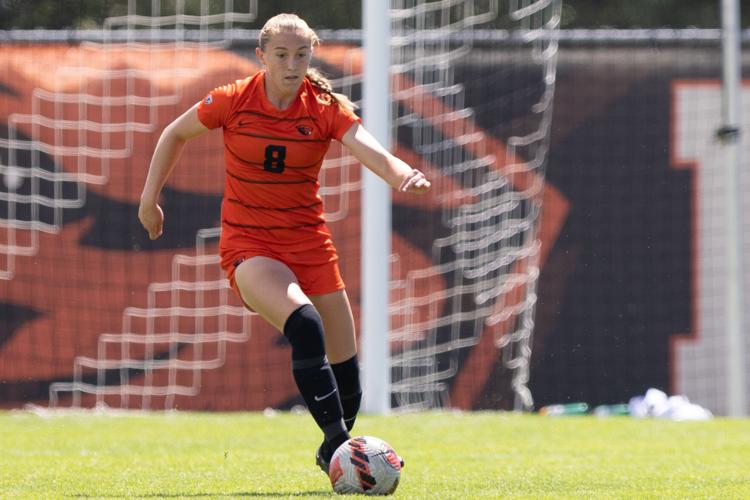 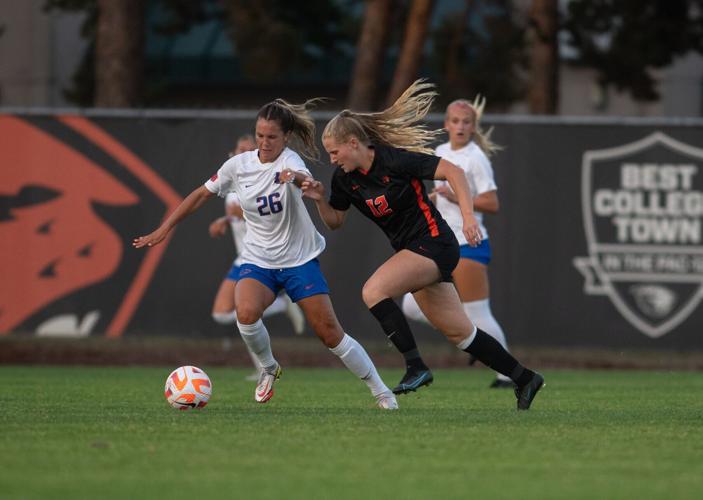 Oregon State’s Abby Schwartz (12) is working her way back into top form following a lengthy recovery from a knee injury.

Oregon State women’s soccer coach Lauren Sinacola dipped into the transfer portal during the offseason to add depth and experience to the roster.

The Beavers (4-2-2) added a top-notch scoring option in midfielder Ava Benedetti, and brought in two experienced defenders: Reese Moffatt, who transferred from LSU, and Caroline Duncan, who played four seasons at Memphis.

Communication is critical on the back line and it has taken some time for the newcomers to get to know each other and their new teammates.

“I feel like it was a little difficult at first, but we get along well,” Moffatt said.

There is an additional factor which Oregon State players have to take into consideration. Duncan is hearing impaired, so communication must be even more timely and direct than usual.

“It was hard adapting with my hearing loss. I struggle to hear a lot. We’ve connected quite well,” Duncan said. “It’s not easy coming into a new environment and saying ‘Hey, this is what I need from you.’ But I think the team easily adapted and helped me every day.”

Moffatt said playing with Duncan has helped her become a better player.

“I feel like I’ve had to step it up … and it’s helped me along,” Moffatt said.

Moffatt played on two LSU teams which reached the NCAA tournament and has quickly emerged as a dependable workhorse for Oregon State. She has started every game and leads the team in minutes played. Moffatt knows what it takes to be successful at the highest level.

“With every game we’re getting better and heading into Pac I’m really excited,” Moffatt said. “I feel like we’ve had our ups and downs, but now I feel like going through those ups and downs, we know exactly what we need to fix.”

The Beavers are working to diversify their offensive attack, but at this point McKenna Martinez is clearly the forward who will draw the most attention from opponents. Martinez has a team-high six goals entering conference play.

Sinacola thinks the pieces are coming together for the team to share the scoring load.

“Obviously, you add someone like Ava Benedetti in there, you have Amber (Jackson) getting back into the attack, which is our goal. Abby Schwartz now coming back fully from her ACL. Soph Conrad, Maddie Tetz, players that found the back of the net for us last year, I think this is the time where they are starting to really feel confident. It’s a good time to be going into the Pac,” Sinacola said.

Oregon State has had more than a week off since its last game, a 1-0 win over James Madison on Sept. 11 in Harrisonburg, Virginia.

“We’ve had a week or so off, not competing against someone else. Good timing for us to kind of recover, recuperate, sharpen things up. I’m excited, we’re in a good spot,” Sinacola said.

The win over James Madison was an important bounce-back game for the team following a difficult 5-0 loss at Virginia on that same trip. The Cavaliers are among the best teams in the country and are ranked No. 2 in the United Soccer Coaches poll. But the Oregon State players were not satisfied with their performance in that game and it showed with a strong road effort against the Dukes.

“Last week we were able to find our fire a little bit,” Duncan said.

A 70th-minute goal by Washington State's Sydney Studer was the difference on Friday night as Oregon State lost its Pac-12 Conference opener to the Cougars 1-0 at Lorenz Field.

The Oregon State men's soccer team wrapped up its nonconference schedule with a 2-1 road win over No. 11 Denver on Tuesday.

Dante Williams scored his second goal of the season to give the Oregon State men's soccer team a 1-0 win over Seattle University on Thursday at Lorenz Field.

Oregon State defender Reese Moffatt takes a free kick during the Beavers' home game against Boise State. A transfer from LSU, Moffatt has quickly become a foundational piece on the Beavers' back line.

Oregon State’s Abby Schwartz (12) is working her way back into top form following a lengthy recovery from a knee injury.