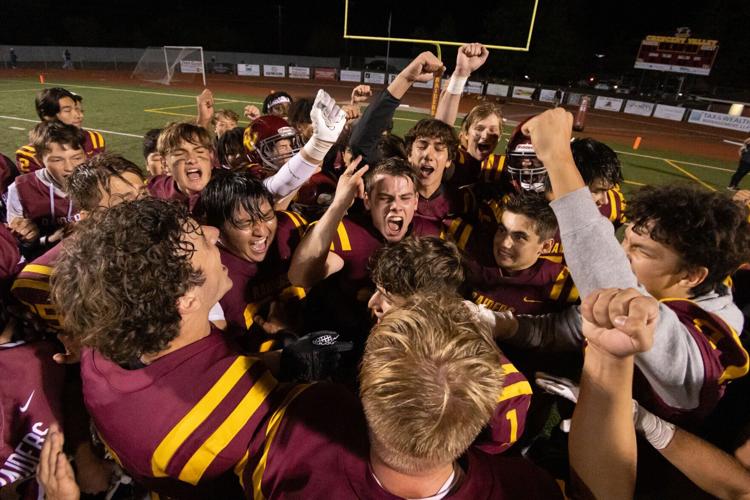 Crescent Valley players celebrate their victory over Corvallis on Friday, Sept. 16 at the Field of Dreams. 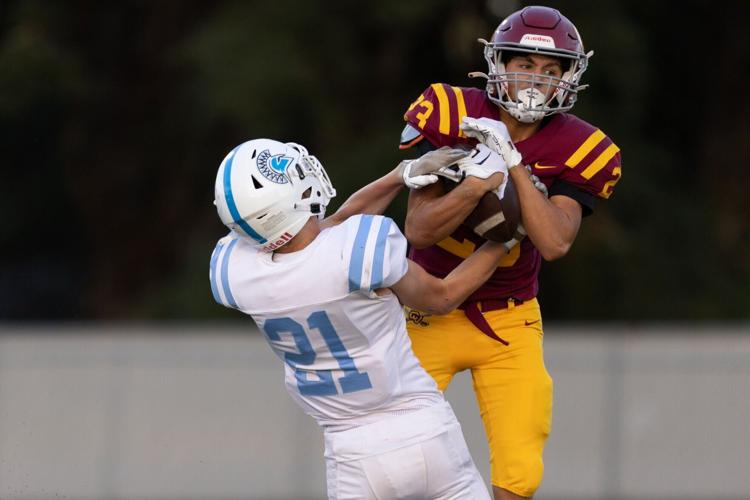 Crescent Valley's Luey Campos (23) makes a touchdown catch over the Spartans Ryder Clow (21) on Friday, Sept. 16 at the Field of Dreams.

It is important to note that this streak includes some extenuating circumstances. An artificial turf field was installed in the fall of 2019 and as a result Crescent Valley had to play six road games that season. Two “home” games were played at Corvallis High and the Raiders won both. Then in 2020, the season was postponed due to the pandemic and a shortened season was played in the spring.

With those circumstances noted, it was still rewarding for the team to celebrate a true home victory. The Raiders came close to ending the streak in a season-opening 27-26 home loss to Willamette.

“It’s a monkey-off-your-back kind of thing,” said Crescent Valley head coach Andrew McClave. “I knew this team was going to be pretty good and we found a way to lose that first game, which would have felt a lot better. So it was huge. Obviously, in league it puts us at 1-1 and we didn’t win a league game last year.”

While it was disappointing not to end the streak against Willamette, there was something special about earning the breakthrough victory against their rivals.

“We took CHS’s best shot. Winning that rivalry game, it just tends to always be a fun contest regardless, so it was huge,” McClave said.

The Raiders jumped out to a 24-7 lead in the first quarter on Friday night as quarterback Rocco McClave threw three touchdown passes to Luey Campos. The Spartans fought back and took a 27-24 lead midway through the third quarter.

But the Raiders answered with a final scoring drive which once again ended with a touchdown pass to Campos. Crescent Valley then made a stand on fourth down to end a Spartans’ drive and were able to run out the clock for the victory.

For Campos, the win was significant because it showed the progress the Raiders have made. They lost to the Spartans 40-15 a year ago.

“It felt great. From last season to this season, it felt great to win against CHS,” Campos said.

Coach McClave said the players have worked hard and been committed. Getting this win shows the team what it takes to win a close game.

“It comes down to making the plays when you have to make the plays. Just the details,” McClave said.

Other highlights from last week’s games:

West Albany High’s fourth-quarter comeback came up short on Friday night in a 26-21 loss to Dallas at Memorial Stadium.

South Albany High dominated the line of scrimmage on Friday night in a 42-8 win at Crescent Valley in a Mid-Willamette Conference football matchup.

The South Albany High football team made several big plays to build a halftime lead and then turned the game over to its defense on Friday night in a season-opening 17-7 victory over visiting Central.

Santiam Christian High has a new football coach this fall, but Justin Carley has made it his goal to make the transition as seamless as possible for a veteran team that has big goals for this season.

Crescent Valley players celebrate their victory over Corvallis on Friday, Sept. 16 at the Field of Dreams.

Crescent Valley's Luey Campos (23) makes a touchdown catch over the Spartans Ryder Clow (21) on Friday, Sept. 16 at the Field of Dreams.