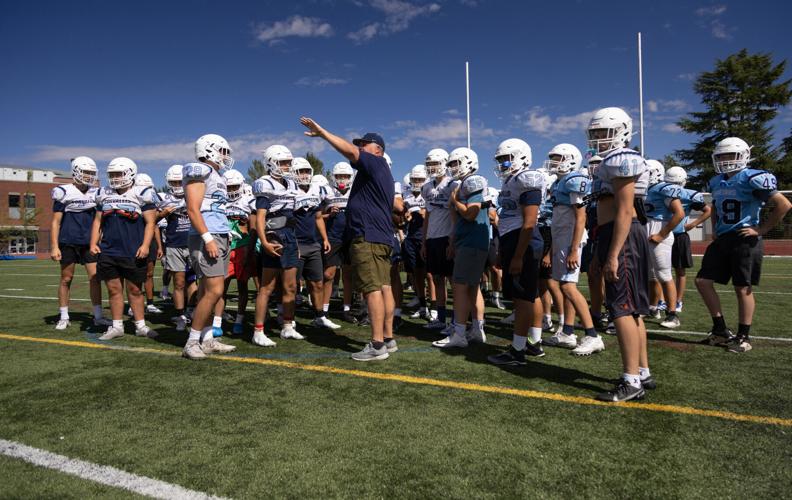 Chris McGowan (center) directs his team during a practice this past August. This season was McGowan's last as Corvallis High School football coach after he decided to step down to pursue other interests. 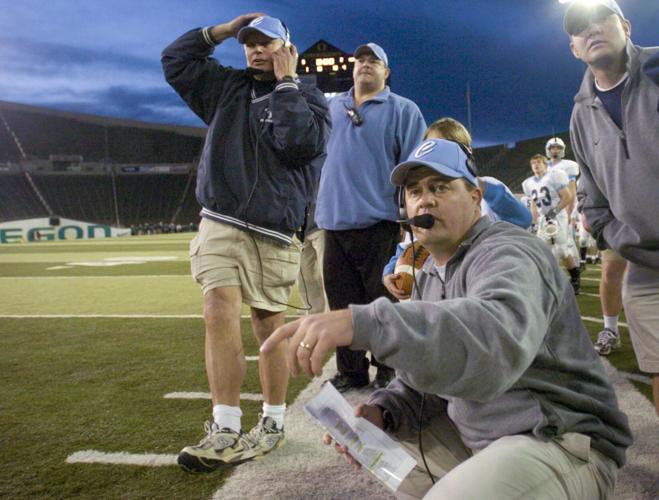 Chris McGowan (kneeling), Ron Sather (standing, with headset) and other Corvallis coaches watch as Wade Penner lined up for the winning kick against West Albany in the third overtime in the 2006 5A football state championship game. 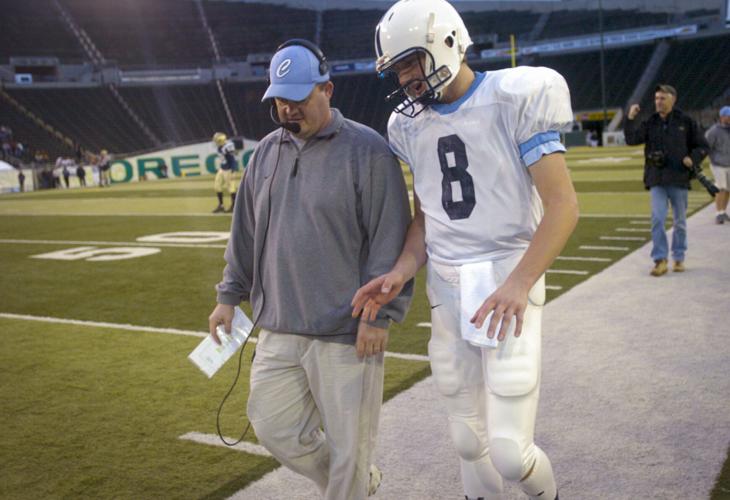 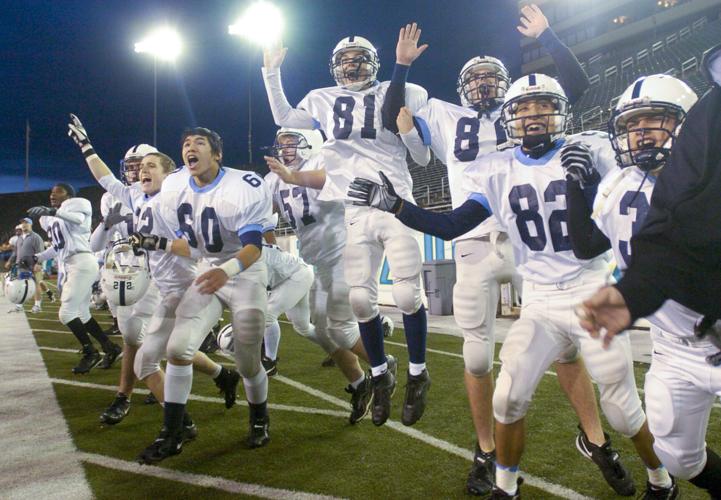 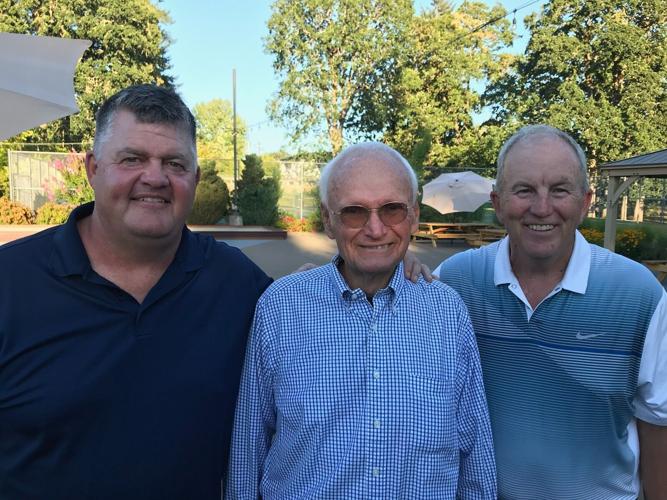 Chris McGowan’s 21 seasons as Corvallis High School’s varsity football coach, and nearly 30 years in all involved with the program, have been filled with positive memories.

But he’s ready to move on and pursue other interests, in particular spending more time with his wife Eden and family.

McGowan’s son Caden is a Corvallis senior and football player, and he wanted to see his son through this past season.

“Personally it was a good time. Just a lot of factors coming together,” said McGowan, who plans to continue teaching social studies at least one more year at the school where he graduated in 1985 and has been on staff since 1999. “Just where I’m at professionally and ready to try something new. Just do some other avenues.”

McGowan, 55, got his start in coaching at Corvallis as a football and wrestling assistant. In 2002, he took over the Spartans’ football program from Gary Beck, whom McGowan had played under and helped CHS win a AAA state title as a junior in 1983. McGowan was also a state champion wrestler.

But the Spartans had won just 14 total football games over the previous nine seasons when McGowan became head coach. The Spartans won three times in his first year, and McGowan knew that was a good sign.

“I really felt like we were going to be competitive and the kids were great and we were in games,” he said.

The next year, Corvallis went 9-2 and won a 4A playoff game. Three seasons later, the Spartans avenged a regular-season loss to Mid-Willamette Conference rival West Albany, as Wade Penner’s 29-yard field goal gave Corvallis the 5A state championship with a 17-14 win in triple overtime at Autzen Stadium.

Another high point for McGowan came in 2014, when the 16 seed Spartans won at top seed Mountain View in Bend in the first round of the 5A state playoffs.

“I knew we had a good team. That was really, really cool,” the coach said.

A personal highlight for McGowan was the 2020-21 season, which was played in the spring due to the pandemic. Corvallis went 3-2 in a truncated schedule.

Everything normally in your control as a football coach wasn’t, McGowan said, and once the green light to move forward was given, preparations were started and everyone involved made the best of the situation.

“Never went inside a locker room all season. The kids were awesome. Our tiny, little team. We were pretty successful. Given the circumstances, just being able to play was such a highlight. It was so good for the kids,” McGowan said. “That year, just to be on the field, was so cool. The fact that they were able to have this memory, compete, was pretty special.”

He won 99 varsity games in all and his teams had nine winning seasons and made eight state playoff appearances. Corvallis went 0-9 this past fall.

McGowan forged many friendships during his coaching career. He’s stayed in contact with Beck and Chuck Solberg, who preceded Beck as the Spartans’ football coach, as well as Ron Sather, a former CHS wrestling head coach and football assistant coach under Beck and McGowan.

Nyquist said he considers his friendship with McGowan a gift of coaching.

Nyquist said he also knew he had to be ready in all facets of the game.

“Because if I didn’t have all those things taken care of with our kids, he was going to find it and expose it. I think that’s the sign of a really good coach,” he said.

Nyquist said that if he had a child who wanted to play football and McGowan was the head coach of the program, he would feel good about the situation.

McGowan’s ability to lead by example is something that stands out to Nyquist.

“He’s made a positive impact in a lot of people’s lives, and Corvallis can be proud of Chris because he did it right,” Nyquist said.

Bob Holt, a former Corvallis High athletic director and coach, said one of McGowan’s strengths was being able to relate to his players as well as his approach with the athletes.

“I think he worked very well with the kids. They liked him. I think he communicated well with them. I just like the way he handled the kids. He did a great job. Of course, I’m not into the yelling and screaming-type coach, and Chris was not that kind of a coach,” Holt said. “I think he treated them well and they understood they were being treated pretty well.”

As his calendar becomes a little more open, McGowan said he looks forward to being able to make extended plans in the summer and fall, something that wasn’t possible the last few decades. He and his wife enjoy traveling. They have a trip to Italy slated in June to visit Eden McGowan’s sister, who is stationed in Naples.

McGowan said he plans to continue to help with the Spartan program in the future. He said he’s always been proud to lead the program, one that’s had just three head coaches since 1969. Work to find the next is underway.

“It is a special thing. You’re a steward of the program for a while. It’s not yours or anything, it’s ours,” McGowan said. “That’s been fun to kind of carry some traditions along. Some of the things we’re doing or things we say go all the way back to Solberg years. Kids don’t recognize that but it does.”

McGowan was a four-year wrestler at Oregon State and went through ROTC and an officer basic course.

He was an assistant football and wrestling coach at McKay High School in Salem for five years and then the wrestling head coach for a year at Keizer’s McNary High, a school where he thought he would “end up there forever.”

But Crescent Valley came calling, and he was the Raiders’ head coach in wrestling for one season before returning at Corvallis, starting a 25-year run back on home turf.

But it’s someone else’s time to be the Spartans’ football leader. It feels right, he said, and he has no regrets despite the emotional ties to the program.

“It’s been such a big part of your life,” McGowan said. “It’s mixed. There’s a lot of things I’ll miss about it. The kids, obviously. The moments. The competition. The relationships. The annual optimism. To be able to get ready, go compete. There’s nothing like it. That’s tempered with, it’s definitely time.”

PHILOMATH — There are some big games ahead and an anticipated shot at redemption at the 4A state tournament for the Philomath boys basketball team.

PHILOMATH — A combined 43 points for Cole Beardsley and Ty May in the boys game highlighted Philomath’s sweep of North Marion on Tuesday in a pair of Oregon West Conference basketball games.

Haley Bland had 14 points to lead Crescent Valley to a 73-71 overtime home win against Corvallis in Mid-Willamette Conference girls basketball.

Karsen Angel had 16 points and five rebounds Monday to lead fourth-ranked South Albany to a 50-45 win at No. 9 Corvallis in a Mid-Willamette Conference girls basketball game.

Losing five seniors to graduation off a state playoff team and returning limited varsity experience hasn’t kept the Corvallis boys basketball team from being in the hunt for a postseason berth again this winter.

Lebanon had eight pins Wednesday night in its 68-12 win against South Albany in a Mid-Willamette Conference wrestling dual.

Some extra work on free throws paid off for Truman Brasfield on Thursday as the Corvallis sophomore made two at the line with 3.9 seconds left to give the Spartans a 65-64 win against visiting West Albany in a Mid-Willamette Conference boys basketball game.

Chris McGowan (center) directs his team during a practice this past August. This season was McGowan's last as Corvallis High School football coach after he decided to step down to pursue other interests.

Chris McGowan (kneeling), Ron Sather (standing, with headset) and other Corvallis coaches watch as Wade Penner lined up for the winning kick against West Albany in the third overtime in the 2006 5A football state championship game.