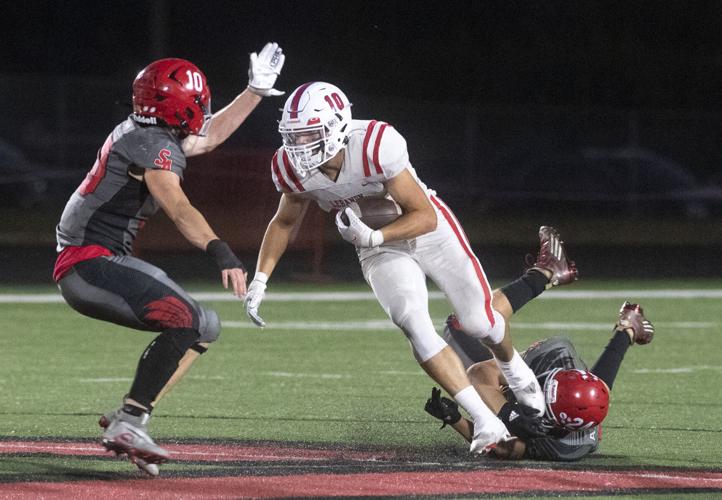 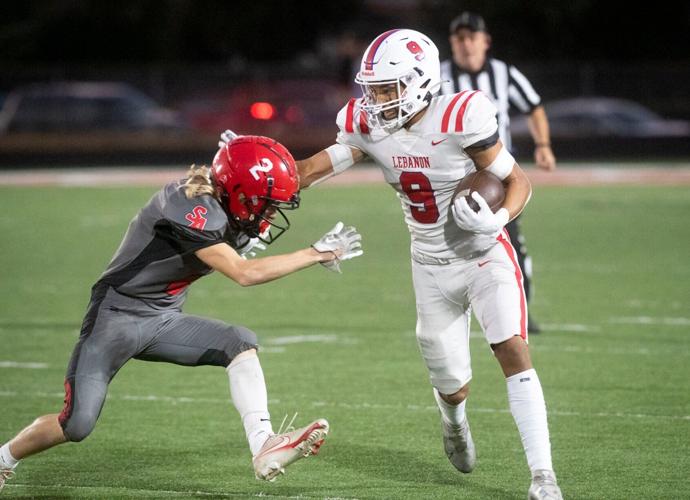 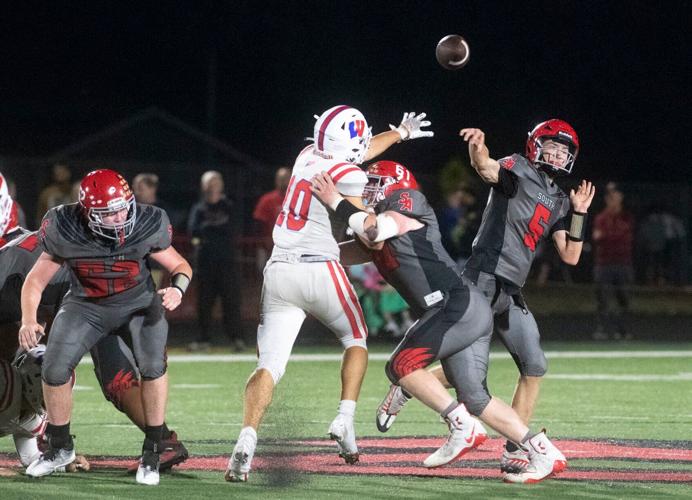 South Albany's Kaden Younger (5) gets off a pass as Lebanon's Wyatt Wessel closes in. Younger completed five passes and also ran for a touchdown.

South Albany was determined to not let Silverton beat the RedHawks two weeks in a row as they moved on from a disappointing defeat to prepare for Lebanon.

Mission accomplished, as ninth-ranked South got a dominating performance from its defense and pounded the ball on the ground Friday in a 21-0 Mif-Willamette Conference football home win at RedHawks Stadium.

South was charged with getting past a 39-35 loss at current No. 4 Silverton seven days earlier and went back to practice to work on that.

“The first couple days were a struggle, but Wednesday, Thursday we really dialed in and we came out here and played how we should play,” said Johnson, a sophomore running back and defensive lineman. “We could have played better, but our defense was absolutely amazing tonight.”

Darius Freeman led the Warriors with 29 yards rushing, while teammate Colton Vandetta had two catches for 21 yards and Ryan Rivers a 20-yard reception.

The game turned immediately in South’s favor when the RedHawks recovered the opening kickoff at the Lebanon 26 after the Warriors were unable to corral the ball. Johnson scored nine snaps later on a 1-yard run.

Lebanon had a prime opportunity early in the third quarter after jumping on a fumble at the South 8. But the Warriors turned the ball over at the South 3 when a fourth-down pass fell incomplete.

The RedHawks then drove 97 yards, sparked by a 32-yard Kollaer run and another for 39 by Johnson that set up Kollaer’s 3-yard touchdown run. South missed a point-after try on the first score, but Younger connected with Maxwell Louber on a two-point pass after the second to make it 14-0.

South had a chance to add to the lead just before halftime after reaching the Lebanon 10. But the RedHawks went backwards on a sack and a holding penalty and came up empty.

After a defense stop to open the second half, the Warriors took possession at the South 47. But again they turned the ball over on downs, this time at the 23.

The RedHawks’ final score came at the end of a 77-yard drive as Younger ran wide left to find the end zone in the opening minute of the fourth quarter.

South plays at No. 10 West Albany next Thursday, while Lebanon hosts Central next Friday.

“We’re still searching to put a great week of practice together. But the kids came back on Monday focused,” RedHawks co-head coach David Younger said. “They wanted to be sharp tonight. Our defense played lights out getting the shut out.”

Santiam Christian’s Maddie Fields and Elise Linderman were named to the 3A volleyball all-state second team, as voted by the state’s coaches.

Central Linn’s Gemma Rowland was selected to the 3A/2A/1A girls soccer all-state first team by a vote of the state’s coaches.

Sweet Home had 26 pins Wednesday on its way to a 4-0 record at the season-opening Weisbrodt Invitational wrestling tournament at Lebanon High School.

Santiam Christian senior Elise Linderman was named the PacWest Conference volleyball player of the year, as voted on by the league’s coaches.

The South Albany High football team played 10 games this season and six of them were against teams that made it to the 5A state playoffs. The RedHawks went 3-3 against playoff teams and 7–3 overall, with their season ending last Friday with a loss in the state quarterfinals at Bend.

Central Linn senior defender Gemma Rowland was named the 3A/2A/1A Special District 3 girls soccer player of the year by a vote of the league’s coaches.

West Albany truly had a roller coaster of a football season.

FOREST GROVE — When Crescent Valley High junior Danielle Street stepped to the service line in the third set of the 5A state volleyball championship match, the Raiders were still in a battle against Bend.

EUGENE — Emily Wisniewski was expecting to be behind through the first mile because that’s how it’s played out for the Crescent Valley sophomore in some of her bigger races.

South Albany's Kaden Younger (5) gets off a pass as Lebanon's Wyatt Wessel closes in. Younger completed five passes and also ran for a touchdown.