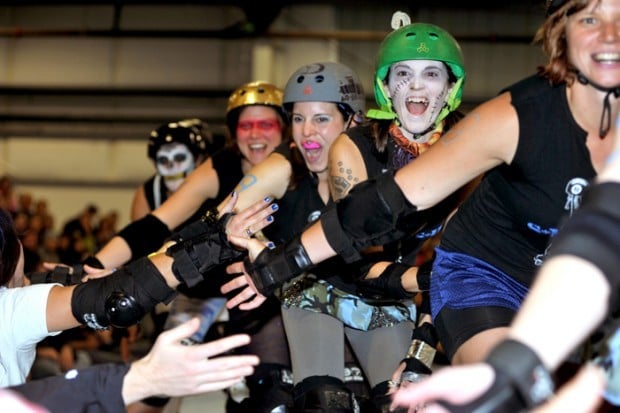 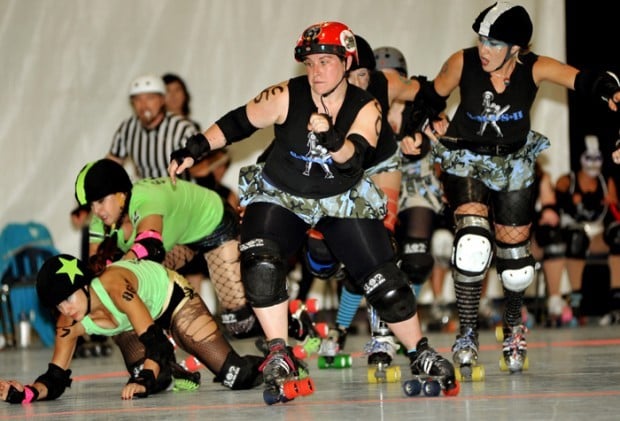 Amy Mumford (aka Back Alley Bruiser) of the SMASH Unit skates her way past a fallen foe in a bout against the Atomic City Roller Girls last September. (Casey Campbell | Contributed photo) 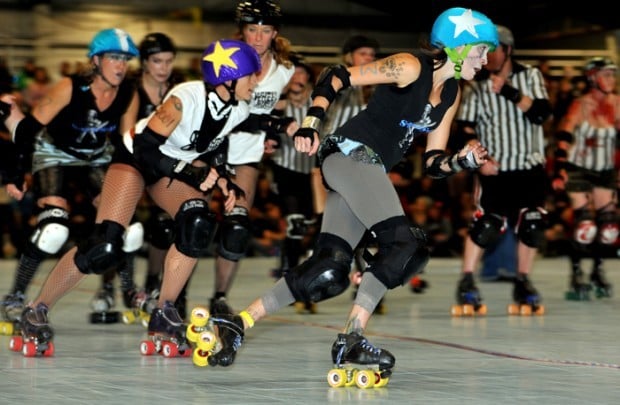 Keri Cribbs (aka Stitches N Bones, in the blue helmet) works as the jammer for the SMASH Unit in a bout last October. (Casey Campbell | Contributed photo)
By Tyler Hansen | The Entertainer

ALBANY — It is a Thursday night, and Genee Hasek is starting a 12-hour shift as an emergency room nurse in Albany. She loves her job, serving as the first link in the medical care chain, treating wounds and running tests and providing comfort.

Within a matter of hours, Hasek’s endearing demeanor will vanish like vapor in the night, and the caregiver will give way to hell on wheels, striking fear into grown women as she lives up to her reputation as the “scariest” character in two counties.

It is a Friday afternoon, and Andi Zeh Condit is at home in Lebanon, knee-deep in fun with her 4-year-old tornado of a son, Cole. Zeh Condit, like other stay-at-home moms trying to stay afloat in the toughest job on earth, is the selfless provider of round-the-clock TLC.

In a short while, Zeh Condit will trade in a car seat and a smile for a helmet and a wicked scowl as she breaks ground on her second career, one in which she will no longer regulate rowdy behavior but instead embrace it.

Behold, the four sweetest words to be typed this winter: Roller derby is back.

For the average person, roller derby is excitement squared. For skaters like Hasek and Zeh Condit, fun barely enters the picture when assessing its value.

“Once you cross that door to the track, you shed your real life,” said Zeh Condit, who will skate in her first bout Saturday with the Derby Dames’ SMASH Unit. “I can hang up my responsibilities for two hours and be free and clear and not have to worry about someone getting proper nutrition or if the car has gas.

“There have been times when I’ve had the crappiest day ever, but then I get to skate and it’s therapeutic — even though you’re hitting people and getting hit and leaving blood on the track.”

The dichotomy of real world vs. derby world, coupled with its all-out physical nature, has helped the Derby Dames’ roster grow from seven when the team formed in summer 2008 to upward of 60 these days.

And half the fun in following the team is learning their alter egos. Zeh Condit skates under the name Land Tuna. (Shark status will come later, perhaps.) Diana Ryan, a children’s art teacher in Corvallis, operates under the alias The D Train. Keri Cribbs, also of Corvallis, works at a yarn shop by day and then skates as Stitches N Bones by night.

And then there’s the nurse Hasek, aka Cruel Anne Unusual, who last year was voted “scariest derby girl” — one teammate said she’s also the nicest — and relishes her role as the intimidator.

“They say it’s like hitting a wall when they hit me,” said Hasek, the oldest member of the SMASH Unit at age 43. “I’m not aggressive. I just really like hitting, and I can take a hit, so it kind of came naturally when I started doing derby. Plus, I’m in the best shape of my life.”

No one ever intends to inflict pain, Hasek said, but it happens. Those who think roller derby is a staged display of faux action are seriously misinformed. Albany’s Meghan Kyllo (CosMo Pain) returns to the track this year after breaking her back — not a fingernail, but her friggin’ back — in a bout last season.

The prospect of injury apparently is not a deterrent to new skaters as the league continues to grow. What’s more, this season the SMASH Unit’s bouts will count in the West Coast Region standings in the Women’s Flat Track Derby Association.

With their roots planted, the Derby Dames have become a mid-valley fixture.

“Skating in bouts that count toward rankings will definitely raise the excitement level. It changes the entire dynamic,” said co-captain and original team member Amy Mumford (Back Alley Bruiser). “This is what we’ve been working towards, a level where we can hold our own against other, older leagues.

“This is going to be our best year yet.”

COST: $10 in advance; $13 at the door; kids 5 and under are free. Tickets available at Uprise Skate Shop in Corvallis, Cash House in Albany or online at www.brownpapertickets.com

Derby Dames co-captain Amy Mumford, aka Back Alley Bruiser, offers up a countdown of the five coolest things about roller derby:

5. Having an excuse to see some of your best friends three or more times a week.

4. Being hit harder than you imagined possible and laughing about it when you land on the floor.

3. Learning that you are more capable than you ever gave yourself credit for.

2. Getting the chance to check your “civilian life” at the door and forgetting about everything but roller derby for two hours at a time.

1. The knowledge that you’re strong enough to hold your own. Against anything.

The Corvallis Repertory Singers will return to live performances with their customary “Candlelight and Carols” concerts on Dec. 18 and 19 at F…

Nominations for the 2022 Grammy Awards were announced Tuesday. Here's a list of nominees in top categories.

This Thanksgiving weekend is offering a box office feast with two genres that have been lacking on the menu so far this year: family movies and non-franchise films aimed at adults.

Afghan girl from famous cover portrait is evacuated to Italy

ROME (AP) — National Geographic magazine’s famed green-eyed “Afghan Girl” has arrived in Italy as part of the West’s evacuation of Afghans following the Taliban takeover of the country, the Italian government said Thursday.

Dwayne "The Rock" Johnson recently created an unforgettable moment for one special, and deserving, fan.

Joe's Root Beer from Marcotte Distilling is featured in our latest episode of the Mid-Valley Dish.

HONG KONG (AP) — A renowned Chinese fashion photographer has apologized for her past work after online critics called it insulting to the Chinese people and fashion house Dior removed one of her photos from a show in Shanghai.

MILAN ` (AP) — Bryan Adams tested positive for COVID-19 upon arrival at Milan’s Malpensa Airport on Thursday, ahead of the unveiling of the 2022 Pirelli calendar that he photographed.

An appreciation: Perfectionist. Genius. Icon. That was Stephen Sondheim

The theatrical giant, who died Friday at 91, was as complex as his lyrics, dogmatic in his rules and not generous with praise about his work.

What was Meghan Markle’s first impressions of Kate Middleton?

What was Meghan Markle’s first impressions of Kate Middleton?

Amy Mumford (aka Back Alley Bruiser) of the SMASH Unit skates her way past a fallen foe in a bout against the Atomic City Roller Girls last September. (Casey Campbell | Contributed photo)

Keri Cribbs (aka Stitches N Bones, in the blue helmet) works as the jammer for the SMASH Unit in a bout last October. (Casey Campbell | Contributed photo)
© Copyright 2021 Gazette-Times, 1835 NW Circle Blvd Corvallis,OR | Terms of Use | Privacy Policy | Do Not Sell My Info
Powered by BLOX Content Management System from TownNews.com.
You don't have any notifications.