Homage to Corvallis: ‘Oregon Experiment’
0 comments
Share this
{{featured_button_text}}
1 of 2 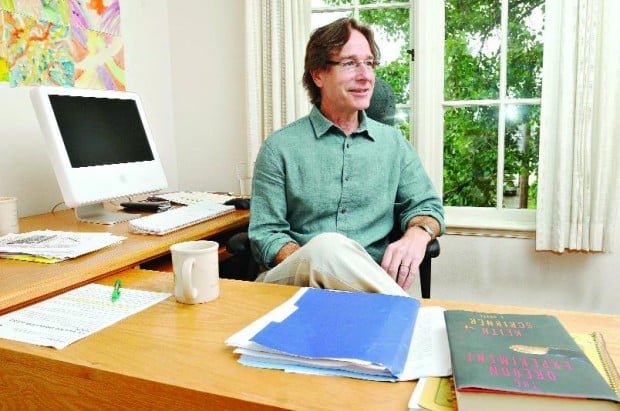 Keith Scribner, an associate professor of English at Oregon State Universtiy, spent seven years writing ‘The Oregon Experiment.’ He is shown at his office in the Autzen Building. (Andy Cripe | Corvallis Gazette-Times) 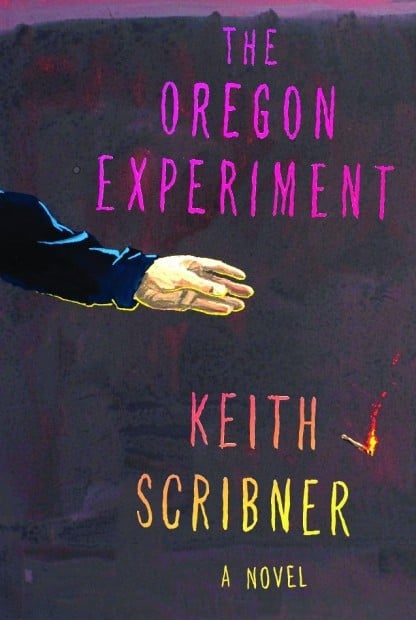 'The Oregon Experiment' by Keith Scibner

By MIKE McINALLY, THE ENTERTAINER

CORVALLIS — In the first few pages of his new novel “The Oregon Experiment,” two of author Keith Scribner’s characters are driving, for the first time, to a city that’s supposed to be, more or less, Corvallis.

It’s nighttime, and on their approach to Corvallis (it’s named Douglas in the novel), one of the characters, Naomi, “cracked her window, and the smell of mint filled the car. Fecund earthy mint carried on moist night air. … She’d never known an entire night to smell of mint.“

It’s a powerful image, and so it’s no surprise that it mirrors one of Scribner’s earliest memories of Corvallis.

“As I was starting this novel,” he said in a recent interview with the Gazette-Times, “I was thinking about my early impressions of Corvallis.” And the night drive, with the car smelling of mint, is one of those strongest impressions.

“I just noticed the terrific smell of the place,” said Scribner, an associate professor of English at Oregon State University.

The sense of smell — which Scribner believes offers “the most direct connection to our past” of all our senses — figures prominently in “The Oregon Experiment,” which was published this month by Knopf.

Naomi is a professional “nose” — a perfumer — who has lost her sense of smell. She’s married to Scanlon, a political science professor who starts teaching at the university in Douglas under a bit of an academic cloud: His most recent paper for the journal Domestic Policy drew harsh reviews, and so he’s feeling the pressure to make a splash with his next publication.

Intrigued by the possibilities offered by radical politics, Scanlon makes contacts with an anarchist and a secessionist in Douglas.

Scribner’s research included diving deep into the world of secessionists and perfumers.

He found that the idea of secession runs deep in the history of the United States. “In so many ways, I think, our country is defined by secessionism,” he said, pointing to events such as the Revolutionary War and the Civil War.

But it’s also a tradition with strong West Coast ties. (The 1999 protests in Seattle against the World Trade Organization helped fuel his early thinking about the novel.)

In fact, his research uncovered a 1941 incident when parts of southern Oregon and northern California seriously flirted with the idea of seceding from their states to form their own state, to be named Jefferson. The movement was serious enough that a provisional capital was named in Yreka, but the movement derailed after the Japanese bombing of Pearl Harbor.

The secessionists believed that state governments in Sacramento and Salem weren’t responsive to their needs.

That’s a familiar strain in secessionist circles, Scribner said. “The arguments have not changed at all.”

For his research into the art and craft of perfume making, Scribner met with a professional perfumer in San Francisco, Yosh Han, and worked with her to actually create a new fragrance.

The themes collide and intersect in different ways for the book’s four main characters, all of whom are “afraid that they can’t

escape their pasts. That’s a major theme of the novel.” And the idea of finding ways to reconcile your past with the present also looms large in “The Oregon Experiment.”

Scribner has been working on “The Oregon Experiment,” his third published novel, for more than seven years. The draft he finally showed his agent was No. 18.

“I tend to write long and then cut,” he said.

After he writes the first hundred or so pages, he keeps track of characters and plot developments through a series of index cards affixed to bulletin boards. (The office he’s been occupying in the Center for the Humanities at Autzen House has two bulletin boards filled with the cards.) It’s a device that’s particularly useful in keeping track of cuts and major changes, such as his decision three years ago to expand the number of “point of view” characters. Originally, the entire novel was told from Scanlon’s point of view, but expanding the canvas required major revisions.

But Scribner said he’s “really happy” with the finished product — and early reviews have been strong.

Corvallis readers likely will enjoy making the frequent connections between the real-life city and the fictional Douglas, although Scribner said his Douglas works in some elements of Eugene as well, particularly the courthouse there: “I did want the kind of courthouse with a steady supply of drummers and dreadlocks and demonstrators,” he said.

But, overall, he said, “I really hope the novel is an homage to Corvallis and an homage to Oregon. There’s so much I love about being here.”

PREVIOUS BOOKS: In addition to “The Oregon Experiment,” Scribner is the author of “The GoodLife” and “Miracle Girl.“

NEXT BOOK: Scribner is at work on a fourth novel, tentatively titled “Connecticut Shade.” (“I will certainly change this title,” he said.) Connecticut Shade is a type of tobacco that’s grown in Connecticut; the novel takes place both there and in Oregon. “I feel so tied to Oregon now,” he said. “It’s hard for me to imagine not writing about it.”

FAMILY: He is married to the poet Jennifer Richter. They have two children, 11 and 10.

Keith Scribner will read from and sign copies of his new novel, “The Oregon Experiment,” from 7 to 9 p.m. Wednesday, June 29 at Grass Roots Books and Music, 227 S.W. Second St. in downtown Corvallis.

‘As I was starting this novel, I was thinking about my early impressions of Corvallis.’

And the night drive, with the car smelling of mint, is one of those strongest impressions.

Hank Azaria, who voiced Apu on 'The Simpsons', apologizes for playing character

"I apologize for my part in creating that and participating in that," Azaria said. "Part of me feels like I need to go to every single Indian person in this country and personally apologize."

Keith Scribner, an associate professor of English at Oregon State Universtiy, spent seven years writing ‘The Oregon Experiment.’ He is shown at his office in the Autzen Building. (Andy Cripe | Corvallis Gazette-Times)

'The Oregon Experiment' by Keith Scibner