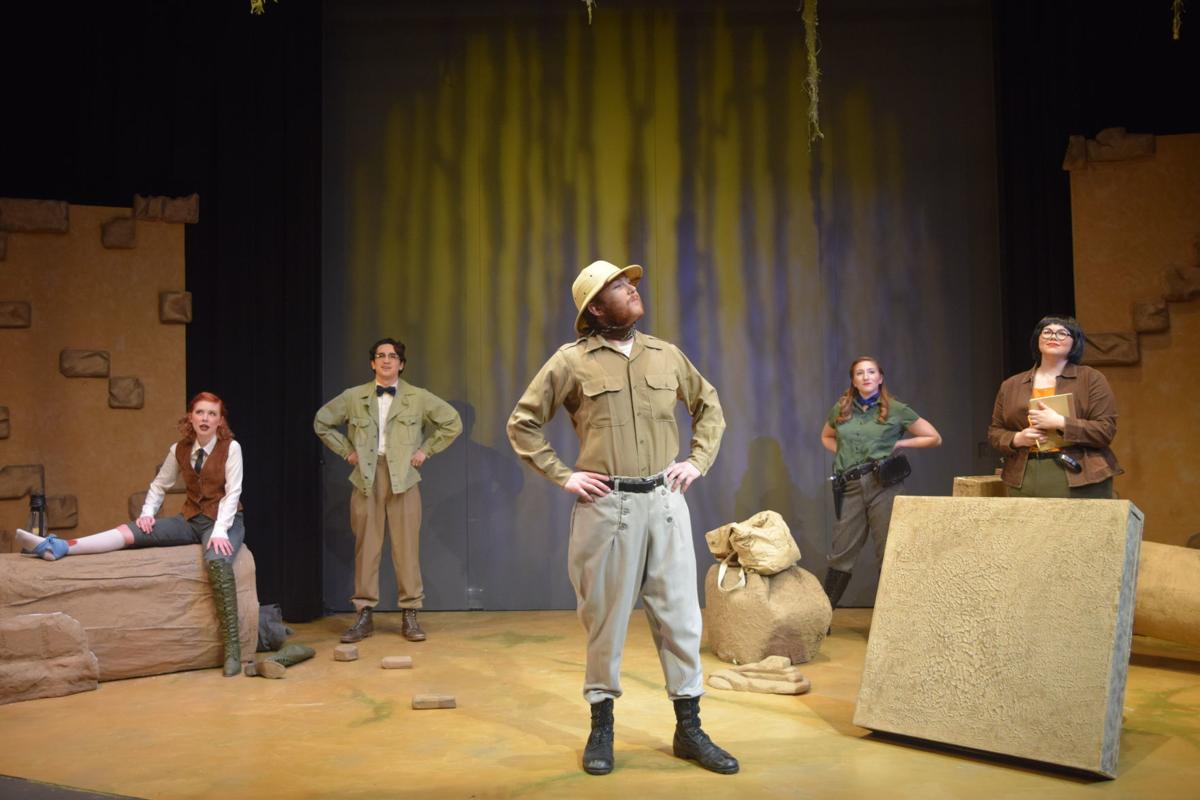 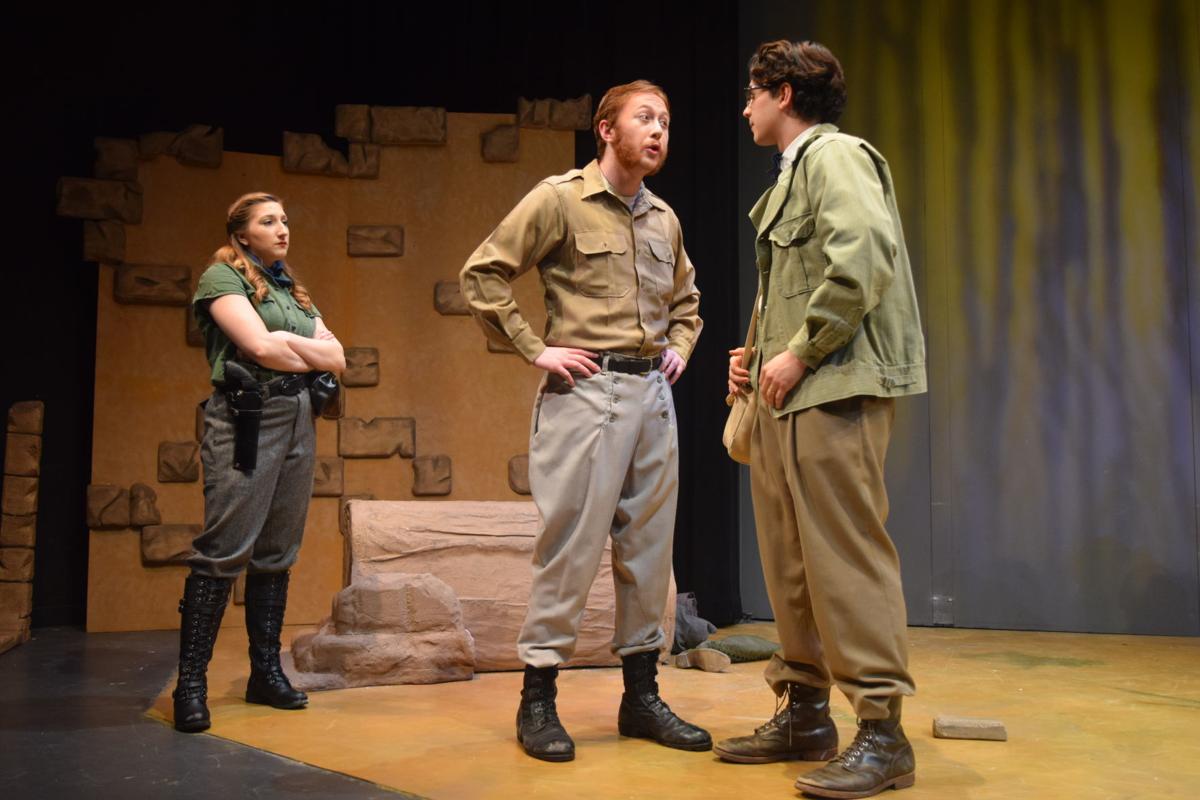 From left: Alessandra Ferriso (Talia), Noah Fox (Hadrian) and Kian Mitchell (Sam) rehearse a scene from "The Expedition of Whispers." 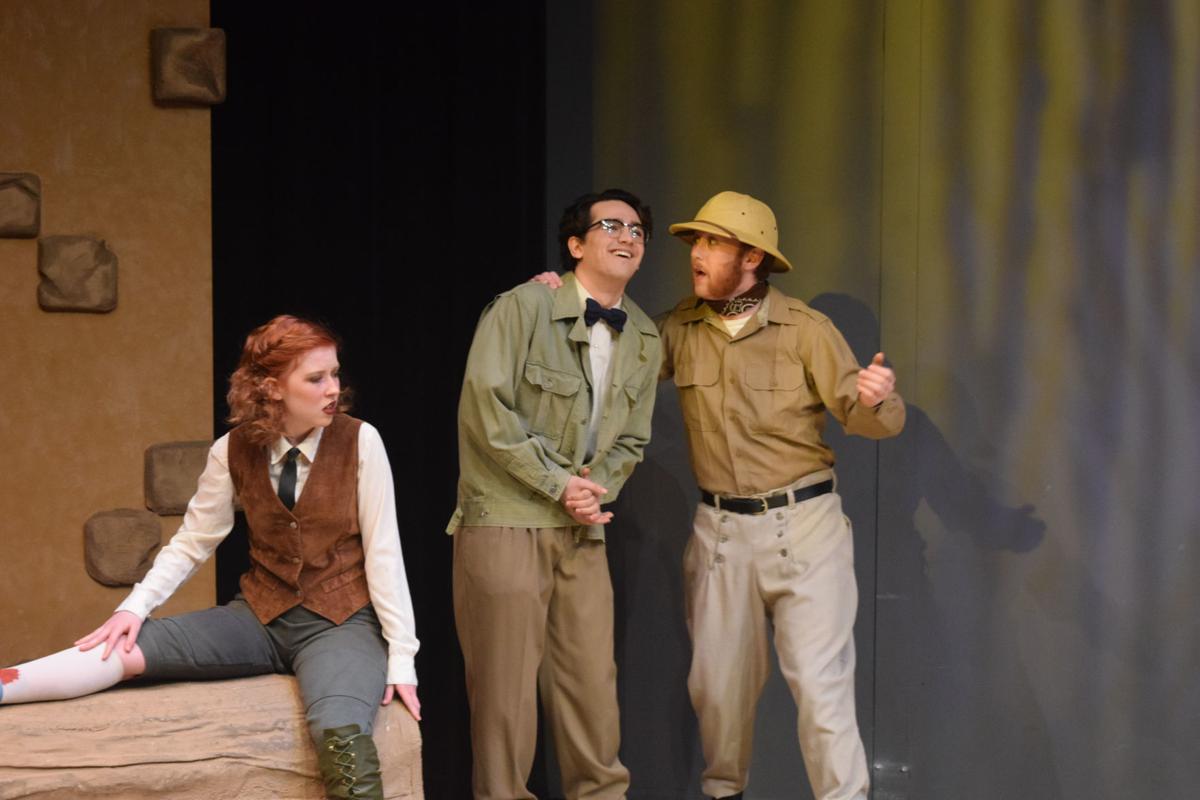 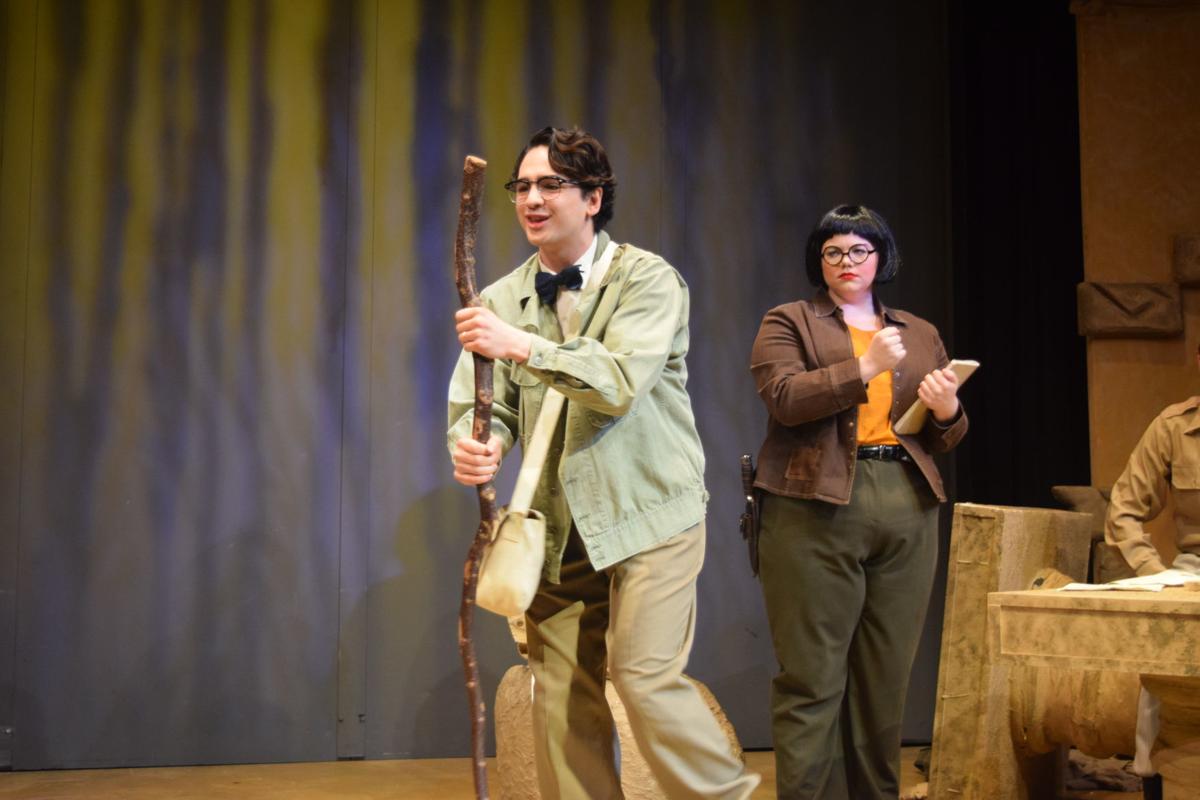 But, he said, nothing will be better than the moment he sees it performed.

It all may feel surreal to Pereira, as it did the first time he attended rehearsals for his action-adventure melodrama. The stage was transformed into an old temple, with vines hanging from the ceiling. Rocks, pillars and rubble lay everywhere and the costumed student actors became the characters.

“It was almost like walking into my own mind,” he said. “I can’t describe it.”

Pereira, who grew up in Portland, is a fifth-year OSU student and a double major in theater arts and digital communications arts with a Spanish minor. He has acted in several OSU productions, including “1984” and Bard in the Quad, and directed a play last spring for the One-Act Festival. He also recently held a role in “The Curious Incident of the Dog in the Night-Time” with the Oregon Contemporary Theatre in Eugene. This is his final term at OSU.

He decided to write the full-length play for his Honors College thesis with help and encouragement from OSU Theatre Arts faculty member Elizabeth Helman, Ph.D. Helman, who is directing the play (no student was available), has worked with him on the script since he began the first draft over the summer.

She said she was glad to support original work from an OSU student, and it was fun to be part of the process from the ground up.

“This play is very Nate, if you know him at all. He definitely likes action-adventure plays,” Helman said. “The play reminds me of a perfect combination of an Indiana Jones film and a D&D ['Dungeons & Dragons'] campaign.”

“The big premise is nobody is who they say they are, and everyone is lying to each other about that,” Pereira said.

The plot, which is set in 1937 in India, follows five explorers as they search for a valuable relic in the ancient and mysterious Valnidi Temple, built by the Dhazgar Empire. (Both are fictional.)

“I went to Cambodia last year and was thinking of the temples there. It gave me a lot of inspiration,” Pereira said.

The team’s mission goes sideways in a cave-in. Its members must work together to escape their predicament while confronting their own hidden truths and working to trust each other amid twists, turns, fights, romance, jokes and secrets to be uncovered.

The expedition is led by museum curator Hadrian Radley (Noah Fox), who wants to add the valuable artifact to his collection. Fiona Langley (Hannah Schwartz), an anthropologist and temple scholar, is his longtime assistant. Talia Macon (Alessandra Ferriso), a tough mercenary and demolitions expert, travels with them for security purposes. Medic Sam Shaw (Kian Mitchell) makes sure no one is injured too badly. And sassy archaeologist Paige Wallace (Libby Brennan) carries a very big secret.

“Not everybody makes it out alive,” Pereira said.

While the winter play is usually a student-led production, Helman said this is the first time she can recall one being written by a student.

“I don’t think it’s something we’ve done before for our winter show,” she said. “It’s totally within the spirit of what we like to do here.”

She said the cast has enjoyed shaping these original characters into their own.

“It’s been fun to watch that organic process, and the ad-libs that come up during rehearsals. Undergrads have a hand in this kind of playmaking,” she said.

Pereira, who hopes to attend grad school for playwriting, said "Expedition" has more than lived up to his expectations.

“Dr. Helman is doing an amazing job directing, and all the actors and crew are fantastic,” he said.

Helman believes audiences will be pleased when they see the effort students have put into the production.

“It’s just a really fun night at the theater,” she said.

Pereira agreed but noted the play does carry a message: “Don’t pretend to be something you’re not. That’s what gets these characters into a boatload of trouble."

'THE EXPEDITION OF WHISPERS'

WHAT: Oregon State University Theatre: “The Expedition of Whispers”

HOW MUCH: Tickets are $8 for general admission, $6 for seniors, $5 for youth and students, and $4 for OSU students. Tickets are available through the OSU Theatre Box Office at 541-737-2784, or online at https://liberalarts.oregonstate.edu/sac/theatre/university-theatre/box-officetickets.

WARNING: This production includes the use of a prop firearm and the sound of three gunshots.

The West Albany High School cafeteria is usually the site of lunchtime gossip, but on Tuesday night, it saw teens in 1930s clothing sitting on…

How can we resist ya? 'Mamma Mia!' sings, dances, loves in CSD production

Show me a person who's never heard "Dancing Queen," and I'll show you ... well, that's the question, isn't it? Who actually falls into this ca…

First published in 1910 — originally in serialized form over nine months in The American Magazine, then as a novel the following year — France…

"When you're staying in a place like Squirrel Lake," proclaims Phillip Olsen with an amused sigh, "you've got to expect a few nuts."

The dimensions of 'Home': 'Ten Tiny Dances' comments on space for Majestic performance

From left: Alessandra Ferriso (Talia), Noah Fox (Hadrian) and Kian Mitchell (Sam) rehearse a scene from "The Expedition of Whispers."