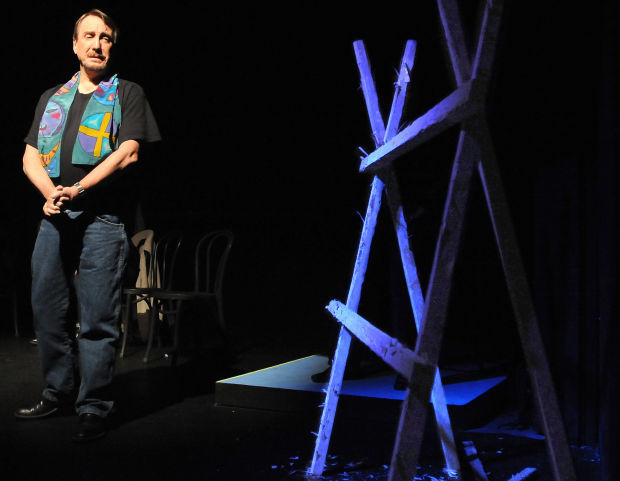 Stephen Mead Johnson (Sam Sappington) talks about visiting the fence Matthew Shepard was tied to the night he was left to die in 'The Laramie Project,' opening this week at Albany Civic Theater. 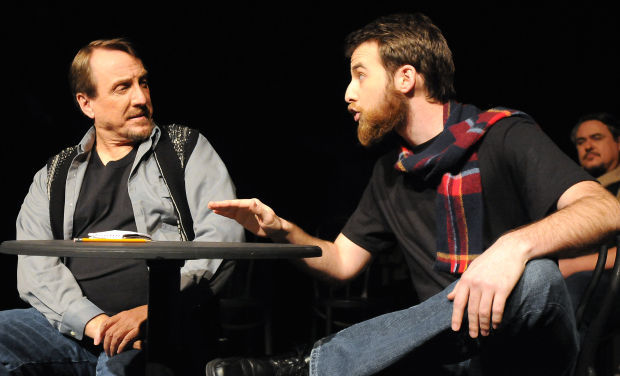 The murder of Matthew Shepard in 1998 stunned the nation and the town of Laramie, Wyoming. He was tortured, brutally beaten and left to die tied to a fence. He was a gay student.

The New York-based Techtonic Theater Company went to Laramie shortly after Shepard's murder to talk to people and find out how Shepard's murder affected them. The company spent hours conducting interviews with friends of Shepard, religious and university leaders, townspeople and law enforcement.

Their story is told in "The Laramie Project," opening Feb. 13 at Albany Civic Theater and directed by Kay Roth.

Christi Sears, another ACT director, handed Roth "The Laramie Project" script and told her she needed to direct it.

"I read the script and reread it several times and realized she was right," Roth said. "This is the second time I had submitted it, so when it was chosen, I was very excited. It is a story that needs to be told."

During the rehearsal process, Roth got a hold of the Matthew Shepard Foundation. They were able to talk to Susan Burk, Laramie Project Specialist. As they learned more about the play, Burk also provided contact information for some of the people the actors would be portraying.

Tom Martin was able to get a hold of his character, Rob DeBree, the detective who interrogated Aaron McKinney, one of the men who tortured Shepard.

"We don't get a lot of direction in the script. I wanted to know what the mood was like and what McKinney was like during the interrogation," Martin said. “What was interesting is that DeBree said that he was very relaxed. He didn't ever want to put McKinney on the defensive. Personally, he was very intense inside, but kept it cool. He planned for a full day and the night before with questions he was going to ask McKinney."

Prior to talking with DeBree, Martin played the scene more like a television interrogation with a bit more tension back and forth. In rehearsals afterward, he portrayed it more like the real event.

The play is set up so that each person plays five to 10 characters. This also meant that when one actor was sick, many roles were missing from rehearsals.

"We had almost a month when at least one cast member was missing due to sickness," Roth said. "Thank goodness I have an amazing production assistant in Becky Berglund who has been with us from the beginning and was able to read lines for those missing."

The challenge for Kay as a director has been to help the actors create so may unique characters.

"While everyone has at least one recurring character, they also have many that the audience will see only once," Roth said. "Giving these characters life is hard, but we have been able to do that by spending time early in the process talking about the characters and sharing ideas and insights."

For most plays the actors get to create their own characters, but in this play they are portraying real people. Roth says it's important that they don't just paraphrase the lines from the play, but get every line correct.

"This cast has done an amazing amount of research into the people they are portraying," Roth said. "At almost every early rehearsal, an actor would come in with something new to share about one of the characters in the play."

Jason Howell plays 10 characters in the second act. In one scene, he plays three different characters with no breaks in between.

"The toughest part is making every one of the characters unique," Howell said. "Some are very easy to make them unique, but with Matt Galloway and Doc O'Conner, the only change is that Matt wears a hat and Doc has a cigar. The real change comes from my physical and vocal assertions."

One of the characters Howell plays in the second act is Fred Phelps from the Westboro Baptist Church.

"People are going to come see this play and see me as Fred Phelps, a very vile human being," Howell said. "I know that this was a real person who hurt, with his words, real people. When I am up there spewing his words, holding his signs, that is never out of my mind. He was a real person hurting real people. It hurts me, but his part of his story needs to be told and told well."

Roth said the audience should expect raw emotions at times, laughter at times and, in the end, a sense that Matthew Shepard's death made people think about their own actions and how they can affect others.

"I would like to warn people that this show is certainly not for children," Roth said. "There are adult themes and some vulgarity, but please keep in mind these are the real words of the people who lived through Matthew's murder and the aftermath."

"We would like to invite audience members to join us in the auditorium after meeting the cast in the lobby," Roth said. "We will be happy to share our thoughts on the experience and answer questions from the audience."

There will also be an American Sign Language interpreted performance on Feb. 26.

"We hope the deaf community will come see our show," Roth said.

WHAT: Albany Civic Theater’s Production of “The Laramie Project,” directed by Kay Roth

Joe's Root Beer from Marcotte Distilling is featured in our latest episode of the Mid-Valley Dish.

Figgy Pudding by Block 15 is a holiday treat and a sort of landmark beer for the mid-Willamette Valley.

Video: Mid-Valley Legendary: ‘The Fabulous Wailers at the Castle’

This album is a time capsule that captures an early garage rock band at the peak of their powers.

Julie Green — artist, teacher, human, friend — spent their life honoring the lives of others through art.

Fans of Albany artist Melissa Babcock Saylor can now carry around a wallet-sized piece of her work, thanks to the Albany Public Library.

Stephen Mead Johnson (Sam Sappington) talks about visiting the fence Matthew Shepard was tied to the night he was left to die in 'The Laramie Project,' opening this week at Albany Civic Theater.