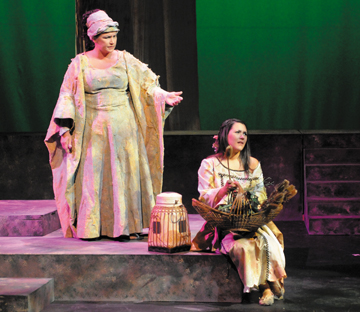 Prospera (Tinamarie Ivey, left) tells daughter Miranda (Kelsea Vierray) about their lives as they were before being stranded on a far-away island in the Willamette Theater Festival’s production of Shakespeare’s ‘The Tempest.’ (David Patton | The E) 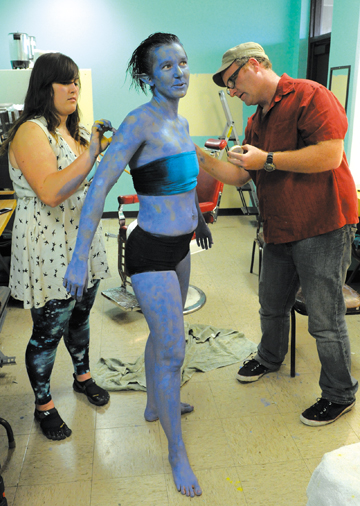 Makeup artist Jarae Lumbert, left, and Director Dan Stone get Dari Lawrie of Corvallis into makeup to be the air spirit, Ariel, during a rehearsal. (David Patton/Democrat-Herald)

What has summertime in the mid-valley done for you lately?

Sure, you got your Linn and Benton county fairs, your River Rhythms concerts, your Oregon Jamboree and Willamette Country Music Festival. But when’s the last time you got to see a blue, pointy-eared air spirit, or had a chance to hear “Hamlet” recited backwards?

Yeah, that’s what we thought. Get thee to the Russell Tripp Theater at Linn-Benton Community College sometime this weekend or next, because directors Dan Stone and Leslie Hammond are ready to put a little more Shake in your summer.

Stone will be directing Shakespeare’s “The Tempest,” and Hammond, “The Complete Works of William Shakespeare (Abridged)” as part of the Willamette Theater Festival’s inaugural repertory theater season. The shows will alternate over the two weekends and tickets are good for either.

With the exception of “Bard in the Quad,” now in its eighth year at Oregon State University, Shakespeare tends to be a scarce quality in the summer, at least in Albany. (Incidentally, “Bard” is going on this weekend, too; Stone says he’ll give you a discount on the Willamette shows if you bring a ticket stub from “Comedy of Errors.” Pinky swear.)

That east-side scarcity is part of of what makes The Bard’s work a perfect choice for the fledgling Willamette Theater Festival group. Bonus: It’s in the public domain, so scripts are free.

Says Stone: “We won’t always be doing Shakespeare. We’re doing it this year because we have no money.”

What the group does have is a large number of talented actors willing to spend a summer sweating in Elizabethan-style getups (exceptions: Dari Lawrie as Ariel the blue air spirit, and Michael Beaton as her earthy counterpart Caliban, the witch’s son, who get to cavort in full body paint and not a lot else).

Stone’s “Tempest” tightens the story from three plots to two, focusing most on the relationship between the wizard Prospera (Tinamarie Ivey of North Albany) and her only daughter, Miranda (Kelsea Vierray of Lebanon). The casting was a deliberate change from the usual male wizard and brings an entirely new energy to the show, he says.

Ivey’s Prospera is “a control freak,” she says; someone who has made a lot for herself out of very little on the deserted island, but who never lets others forget just how much she’s sacrificed on their behalf.

That said, Prospera knows when to relinquish control when it’s in her daughter’s best interest to do so. She can even give up her magical ability if that will help Miranda’s future.

“She’s a very loving mother,” Ivey explains, “but it’s very important to her that her daughter be strong and well-educated.”

Adds Stone: “There’s this whole motherly aspect that I find far more interesting that with a male Prospero. It’s completely different.” Generally speaking, “Tempest” is Shakespeare at its classical height. “The Complete Works,” on the other hand ... well, put it this way. When you get three guys to do 37 plays in an hour and 45 minutes, some of the classical bits are not to be.

Benjamin Sell and Michael Winder of Albany and Eric Nepom of Corvallis take on the challenge, inviting audience participation and weaving in a good bit of improvisation as they go. You don’t need to know a word of Shakespeare to appreciate it — although it helps, especially if you want to get all the best jokes.

“It’s a fast-paced, chaotic show that in the end I think is informative,” Nepom insists. “Thirty-seven plays in less than two hours, how could it not be informative? It’s like a crash college course. And we’re so much more interesting, because we have amazing costumes, amazing sets, amazing technical, and the acting is phenomenal.”

The cast is confident Shakespeare himself would have approved. In fact, they urge the paper to say he had. What’s the guy gonna do, sue? “I’m rolling over in my grave — with laughter!” director Hammond cracks.

OK, so it’s “borderline blasphemous,” she says, but that’s what makes the show worth coming to see.

“I’m very much about people enjoying live productions and live theater,” Hammond says. “A lot of theater is very heady and very talky, and kind of a bummer. Summer is OK for laughing out loud.” •

WHAT: The Willamette Theater Festival presents “The Tempest”

Prospera (Tinamarie Ivey, left) tells daughter Miranda (Kelsea Vierray) about their lives as they were before being stranded on a far-away island in the Willamette Theater Festival’s production of Shakespeare’s ‘The Tempest.’ (David Patton | The E)

Makeup artist Jarae Lumbert, left, and Director Dan Stone get Dari Lawrie of Corvallis into makeup to be the air spirit, Ariel, during a rehearsal. (David Patton/Democrat-Herald)