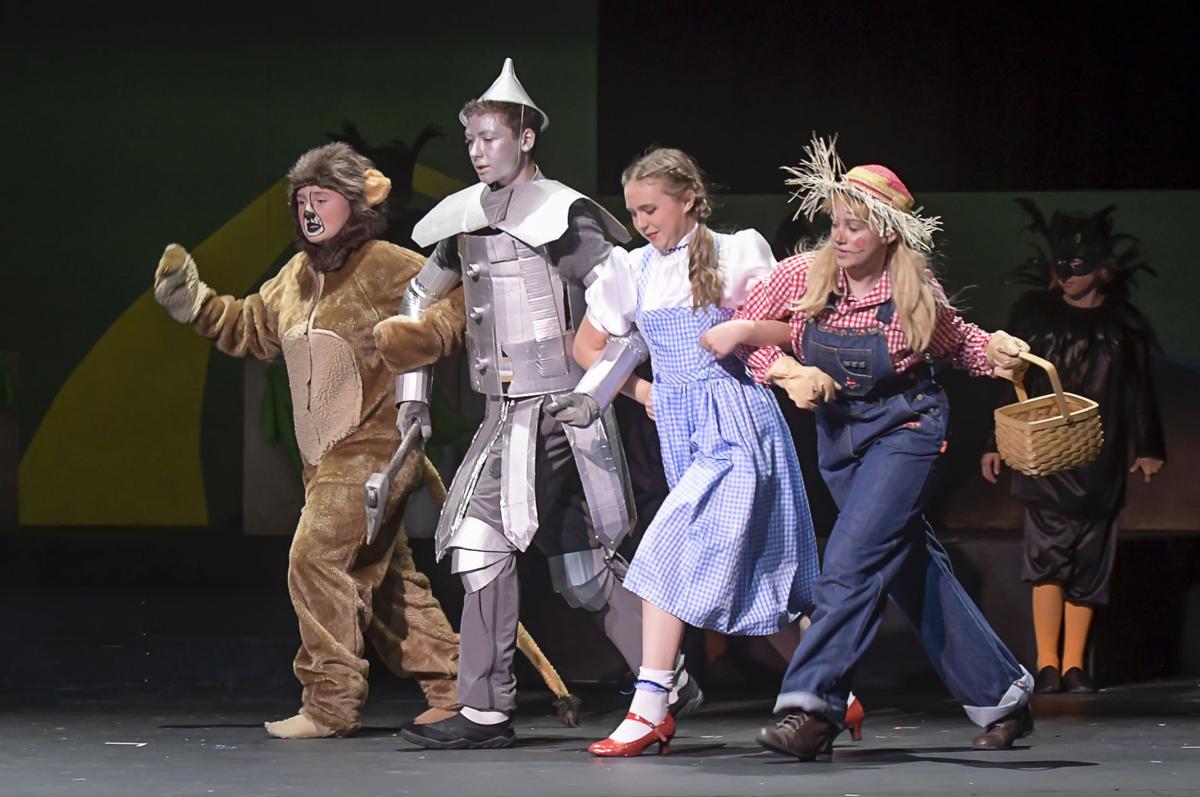 From left, Fiona O'Daniel, Sam Mutschler-Aldine, Sydney Hoffman and Madelyn Clark are off to see the wizard on Wednesday morning during the final rehearsal day for Majestic Theatre's summer camp production of "The Wizard of Oz." The show runs Thursday through Saturday. 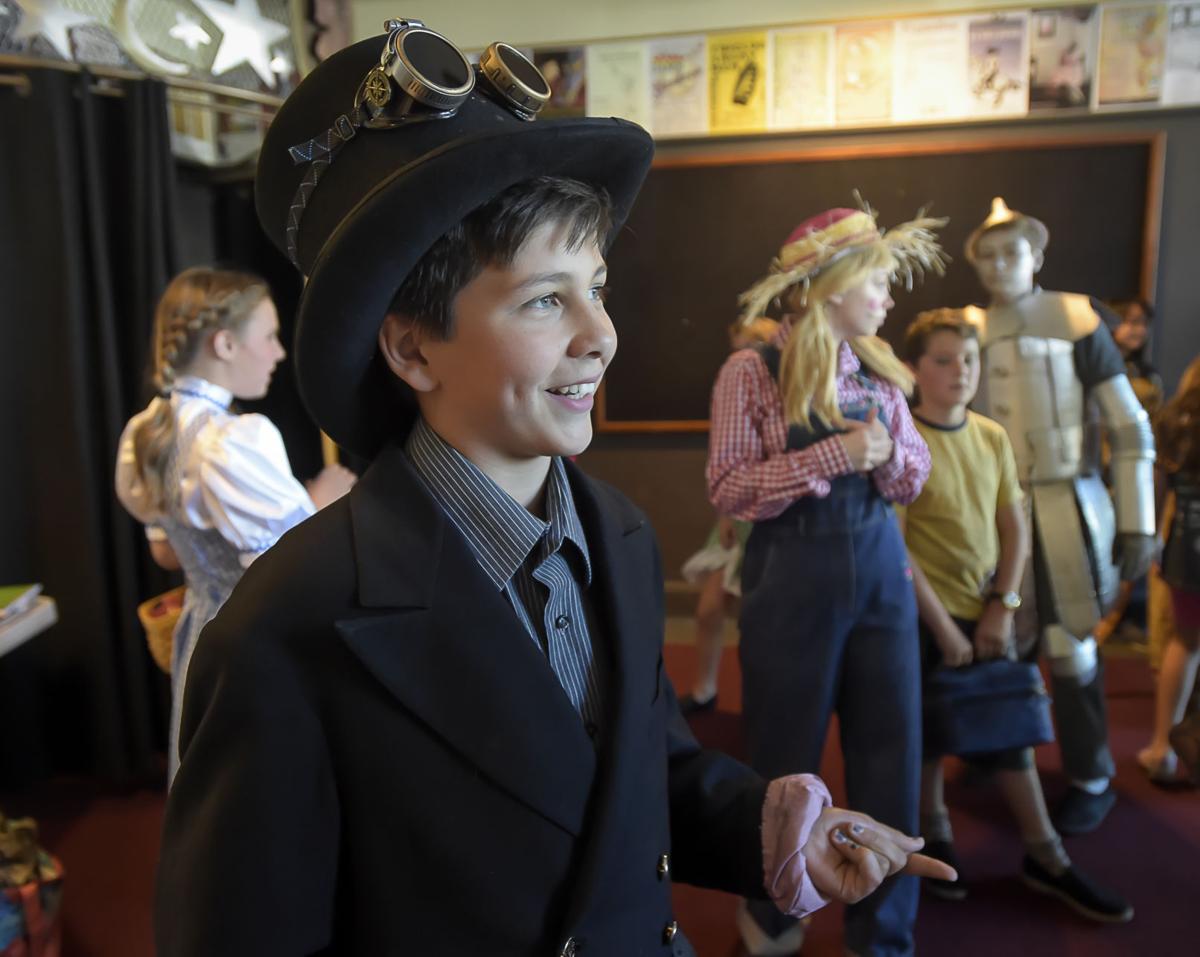 Thomas Guenther, 12, talks about the Wizard and Tin Man roles he is playing in the Majestic Theatre's summer camp production. 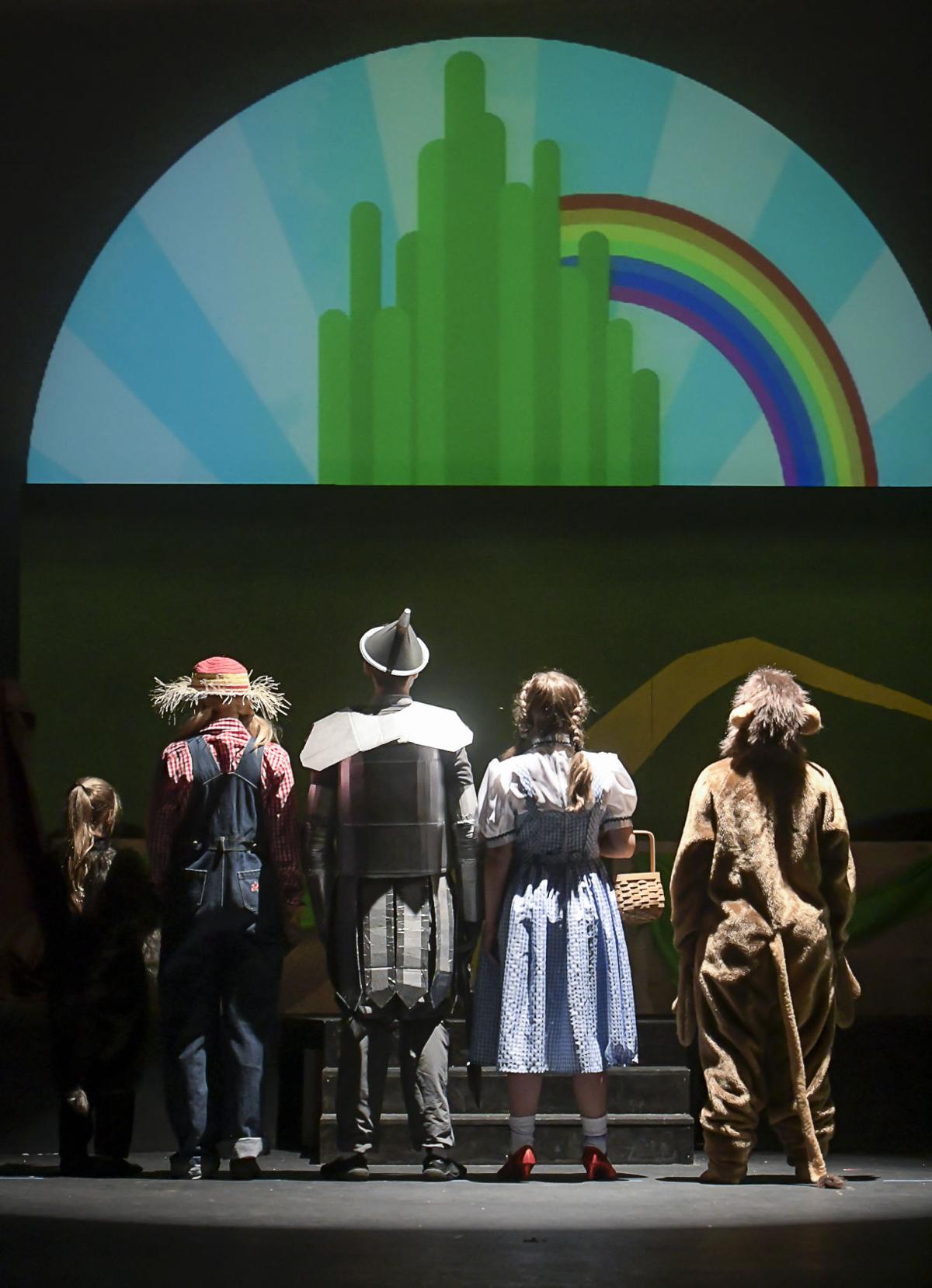 The main characters get their first look at the Emerald City during rehearsals Wednesday. 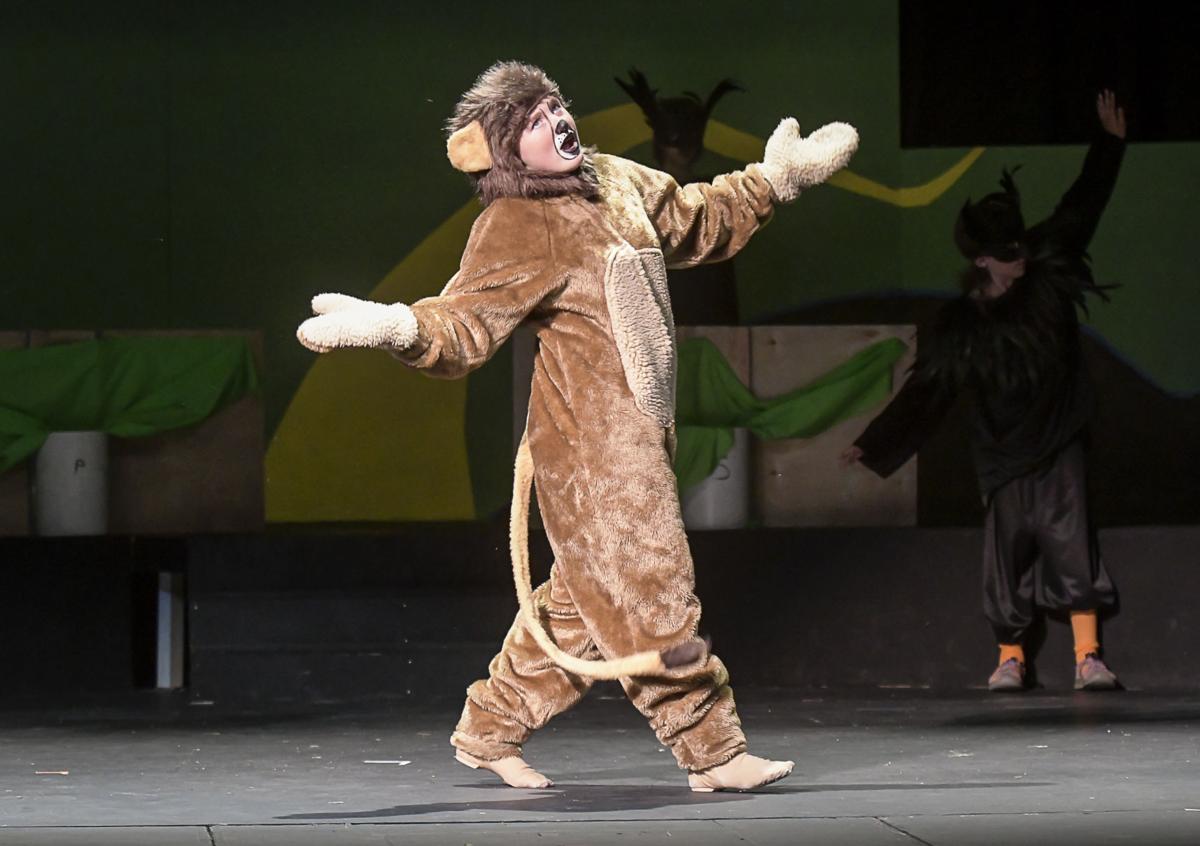 Fiona O'Daniel performs during rehearsals Wednesday morning for the Majestic Theatre's summer camp production of "The Wizard of Oz." McDaniel will be seeking her courage for the next three days of performances.

“It’s a challenge,” said Chuck Skinner, who is the sharing directing duties with camp founder Cherie Gullerud. “This is really a special effects show, but the actors have been spot-on. These are pretty amazing kids. Everyone was very willing to put in the time to be part of the show.”

“They’re pretty committed,” Gullerud said. “They are here from 9 to 4 every day, with a break for lunch. We keep them well-fed and entertained.”

Gullerud and Skinner have added the jitterbug scene that is alluded to in the movie but wound up on the cutting room floor.

“The movie is so iconic,” Skinner said, “but we tried to add some elements that aren’t in the movie.”

Gullerud also echoed Skinner’s comments on the technical aspects of the show.

“We have 540 lighting cues,” she said. “It’s hugely technical, with the witch melting and all the songs. It’s really lovely.”

One of the toughest challenges facing the acting crew is the dual role played by 12-year-old Kings Valley Charter School student Thomas Guenther, who will play the wizard tonight and Friday and then switch to the Tin Man on Saturday.

“When you change characters there is new blocking, lines and cues,” said Guenther, a theater veteran who played a number of roles in “Singin’ in the Rain” when he was living in Colorado and tackled Ginny Weasley in the Kings Valley production of “A Very Potter Musical.”

“That was my first female role,” Guenther said. “I learned a lot about makeup and it was a good test for me.”

How do you play Scarecrow when the audience knows so much about Ray Bolger’s performance? That was the key question for Madelyn Clark, 16, who will be a junior at Corvallis High School in the fall.

“They let me build my character. It was a fun process,” said Clark, who said she started to watch the movie during her preparation … but then stopped.

“I wanted to learn how he walked,” she said. “But I’m a different scarecrow. I worked a lot on my accent … I wanted it to be different.”

“Kind of like a Southern belle. Ditzy, like Reece Witherspoon in ‘Legally Blonde.’ Fun, but a little bit dipsy.”

In other key roles, Sydney Hoffman is Dorothy, Fiona O’Daniel is the Lion, with Sam Mutschler-Aldine as the Tin Man on Thursday and Friday, Olga Tuttle as the Wicked Witch, Raina Wetzel as Auntie Em, Adam Franks as Uncle Henry and Emma Doty as Toto.

Choreography is by Amy Clark and Sue Aldine, sets were designed and built by Roman Guenther and John Doty and Sarah Sullivan is the lighting designer. Gregory Leathrum, meanwhile, is the Sound Wizard.

Leathrum, 15, is schooled online at the Connections Academy. He is responsible for the sound and projections in the show and his fellow campers, recognizing his computer mojo, dubbed him Sound Wizard early in rehearsals.

A key challenge for Leathrum was the entrance of the good witch Glinda. “I wanted to make it magical,” Leathrum said. “I spent quite a bit of time on it.”

Leathrum also burned a lot of electrons fashioning entrances and exits for the Wicked Witch.

“The success of a play or a movie depends entirely on how you present the bad guy,” Leathrum. “That’s where I spent most of my time and effort.”

This is the second summer camp for the Majestic. Last year’s campers performed “Jungle Book.”

Show: The Wizard of Oz

Kim Kardashian is in a legal tussle over new brand name

There are a few concert series starting up in August, providing live music for area residents.

Take a journey to Timberline Lodge, which is the most quintessentially Oregon building ever.

Deanna White's "Emotions as my Guide" art show will be on display at The Arts Center in Corvallis August 3 to September 18.

Mid-Valley Live: Return to the Darkside

Paul Turner was a little nervous as the big day approached.

A day-hiking vacation took an abrupt turn within the first mile of the first trail, all thanks to a sprained ankle.

The River Rhythms concert series kicks off Thursday evening with a performance by Super Diamond, a Neil Diamond tribute band.

William F. Finley National Wildlife Refuge is an ornithologist’s dream, and a great place for a walk in the great outdoors, too.

The Gothard Sisters will play a concert at the Whiteside Theatre on July 23.

From left, Fiona O'Daniel, Sam Mutschler-Aldine, Sydney Hoffman and Madelyn Clark are off to see the wizard on Wednesday morning during the final rehearsal day for Majestic Theatre's summer camp production of "The Wizard of Oz." The show runs Thursday through Saturday.

Thomas Guenther, 12, talks about the Wizard and Tin Man roles he is playing in the Majestic Theatre's summer camp production.

The main characters get their first look at the Emerald City during rehearsals Wednesday.

Fiona O'Daniel performs during rehearsals Wednesday morning for the Majestic Theatre's summer camp production of "The Wizard of Oz." McDaniel will be seeking her courage for the next three days of performances.