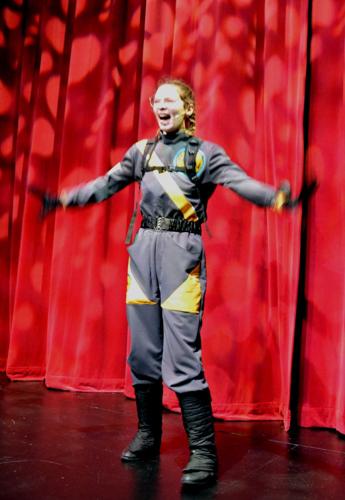 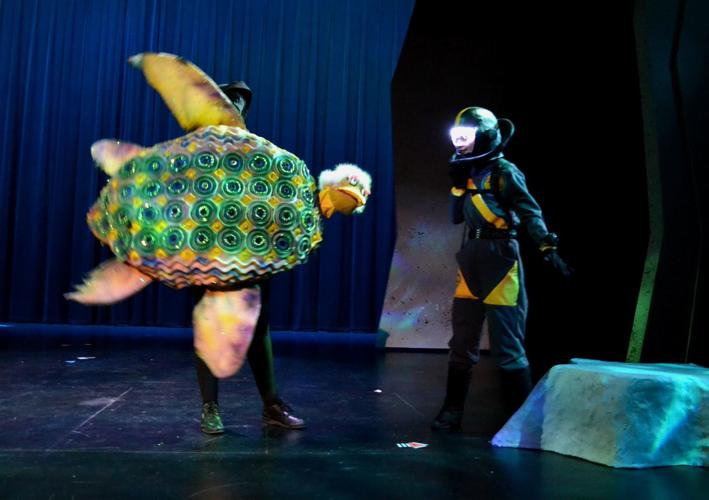 Linn-Benton Community College's theater program has a long tradition of producing an annual children's show — in fact, after nearly a half-century, those shows have become "our bread and butter," says Dan Stone, head of the program.

Under Stone, LBCC theater also has developed another tradition, of creating what he calls "community-engaged theater," locally created works that deal with social issues.

So it makes sense that, this year, those two traditions meet in LBCC's 44th annual children's show: "Josephina Jordan, Junior Underwater Explorer, and the Mystery of the Plastic Fish!” The show, which Stone wrote with the assistance of staff members at the Oregon Coast Aquarium, tackles the issue of plastic garbage in the oceans, but it does it in a manner appropriate to its younger audiences: "We're not trying to hit people over the head with a hammer," Stone said. "You don't want it to be preachy."

"Josephina Jordan" was created through much the same process that led to previous LBCC productions for adults, shows that dealt with topics such as veterans with PTSD, immigration and extreme politics. The process starts with identifying a topic of interest, talking it through, conducting interviews on the topic and then searching through that material for common denominators that can come to life on the stage.

"We just took that process and applied it to our children's theater this year," Stone said. It marks the first time that LBCC has staged a locally written children's show.

"Josephina Jordan" features just one human character — LBCC student Shyanne Bolton plays Josephina, the 12-year-old heroine, who is the youngest member of the International Association of Underwater Explorers. In her submarine, the Big Tuna, Josephina and her sidekick, Archibald Otter (a sea otter, naturally) explore the wonders of the deep.

Josephina and Archibald are called out to help a sea turtle in distress. It turns out that the turtle has ingested a plastic shopping bag. (This happens frequently in the real world, Stone noted, as turtles mistake the bags for sea jellies.)

But that opens the door to another issue: All around them, the sea life is becoming petrified. Josephina and Archibald, with the help of the audience, set out to get to the bottom of the mystery and to set matters right.

Stone said he worked closely with staff members at the Oregon Coast Aquarium and also consulted briefly with people at the Hatfield Marine Science Center in Newport: "That's why I say 'sea jelly' now," he joked; most of us still use the incorrect term "jellyfish."

To bring the play to life required a variety of puppets, created out of found and recycled materials by Stone's colleague Tinamarie Ivey, and an elaborate set for the Big Tuna, which includes working lights and video screens. (Richard Elvin, LBCC's theater manager, played a big role in building the Big Tuna.)

Stone said the play offers lessons about the ocean other than just the issue of plastics pollution, and it doesn't skimp on entertainment and old-fashioned stage magic: "The entertainment part makes the education part easy to swallow."

There's some talk about getting "Josephina" out of the confines of the Russell Tripp Performance Center and taking the show on the road, but Stone said he wants to be certain that the show will travel well: "Our theater is blessed with all sorts of toys to play with," he said, and other locales might not have the same advantages.

In the meantime, hundreds of mid-valley children will be checking out "Josephina Jordan" during weekday field trips to LBCC that are staged in addition to the two Saturday performances that are open to the public.

Stone said it's not unusual for student performers to tell him about their memories of attending LBCC children's shows: "Our children's theater program is kind of a hidden gem in that we have such a long tradition."

WHAT: "Josephina Jordan, Junior Underwater Explorer, and the Mystery of the Plastic Fish"

HOW MUCH: Tickets are $8 for adults, $6 for under 18. They can be bought online at www.linnbenton.edu/tickets or at the door one hour before performances.

'I GOT GUNS!' GETS HONORS

The recent Linn-Benton Community College theater production "I Got Guns!" has been selected as one of three shows to be performed at the regional Kennedy Center/American College Theater Festival to be held later this month at the University of Oregon.

LBCC's play was one of only three plays chosen from the region, which includes colleges in Oregon, Washington, Idaho, Northern California, Nevada, Colorado, Montana, Wyoming and Alaska.

LBCC's "I Got Guns!" will be performed along with shows from Humboldt State University and the University of California-Davis. One of the three shows will be selected to be performed at the national festival, to be held in April at the Kennedy Center in Washington, D.C.

"It's a great honor," said Dan Stone of LBCC's theater program, who wrote and directed the play.

"I Got Guns!" takes satirical aim at extreme political viewpoints and gun-control issues, and is staged in the improvisational slapstick style of commedia dell'arte.

LBCC theater students will perform "I Got Guns!" twice on Feb. 20 at the regional festival.

Since it played last year at LBCC, the show has gone on the road for a Jan. 19 performance at Mount Hood Community College, where it attracted a full house.

"People like the idea of gun control and comedy," Stone joked.