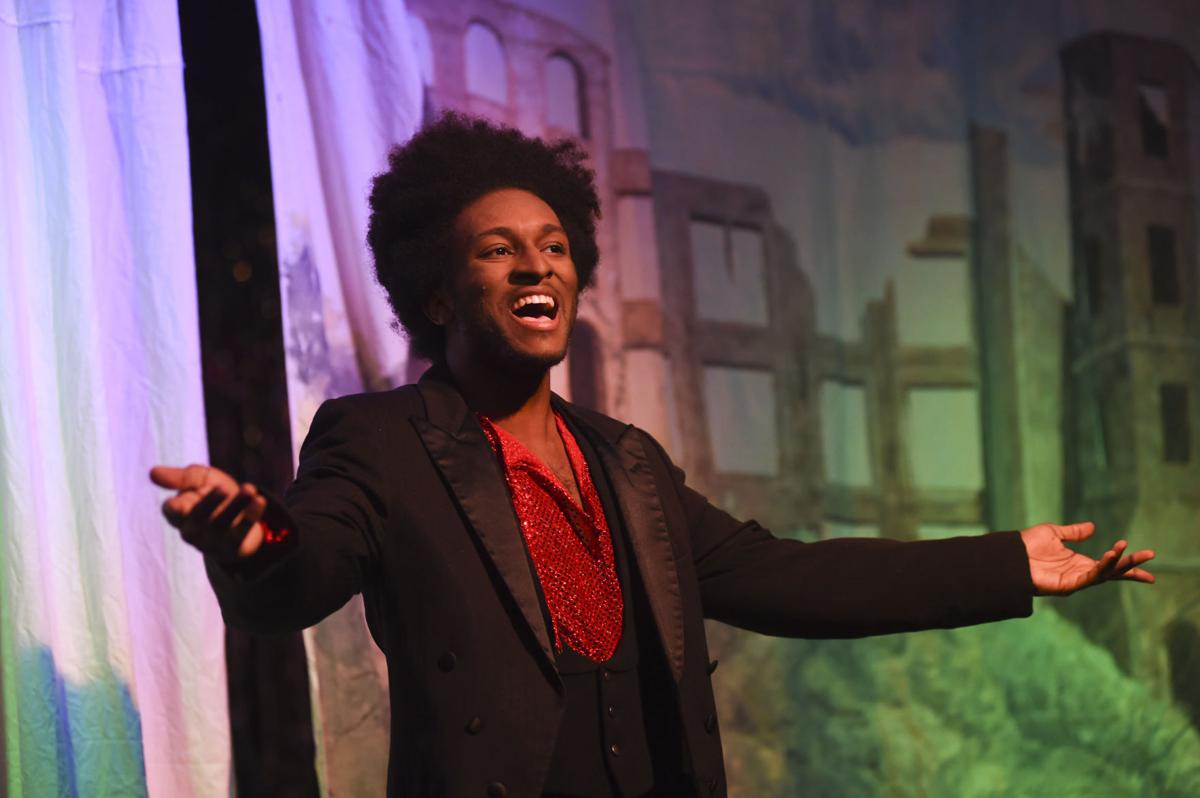 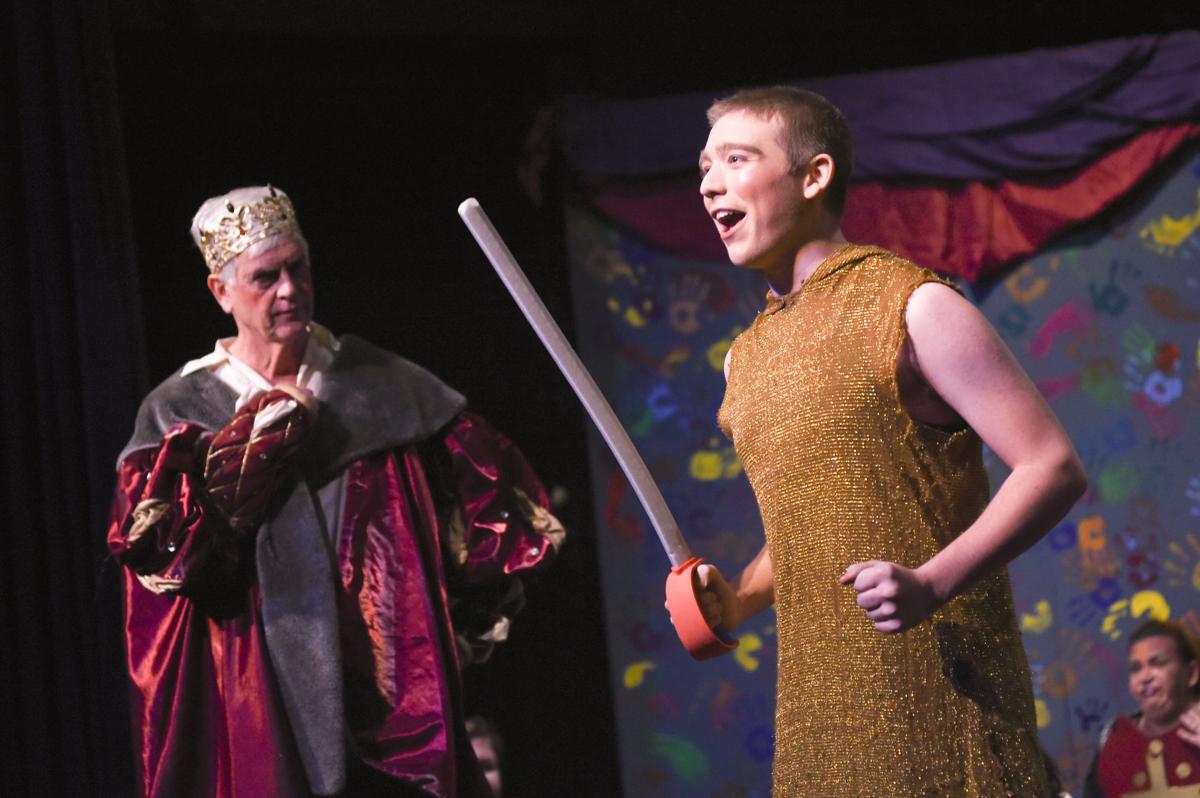 Jarred Sheffield as Pippin, right, and Ron Seymour as King Charles perform a scene from "Pippin." The musical traces Pippin's search for his "Corner of the Sky." 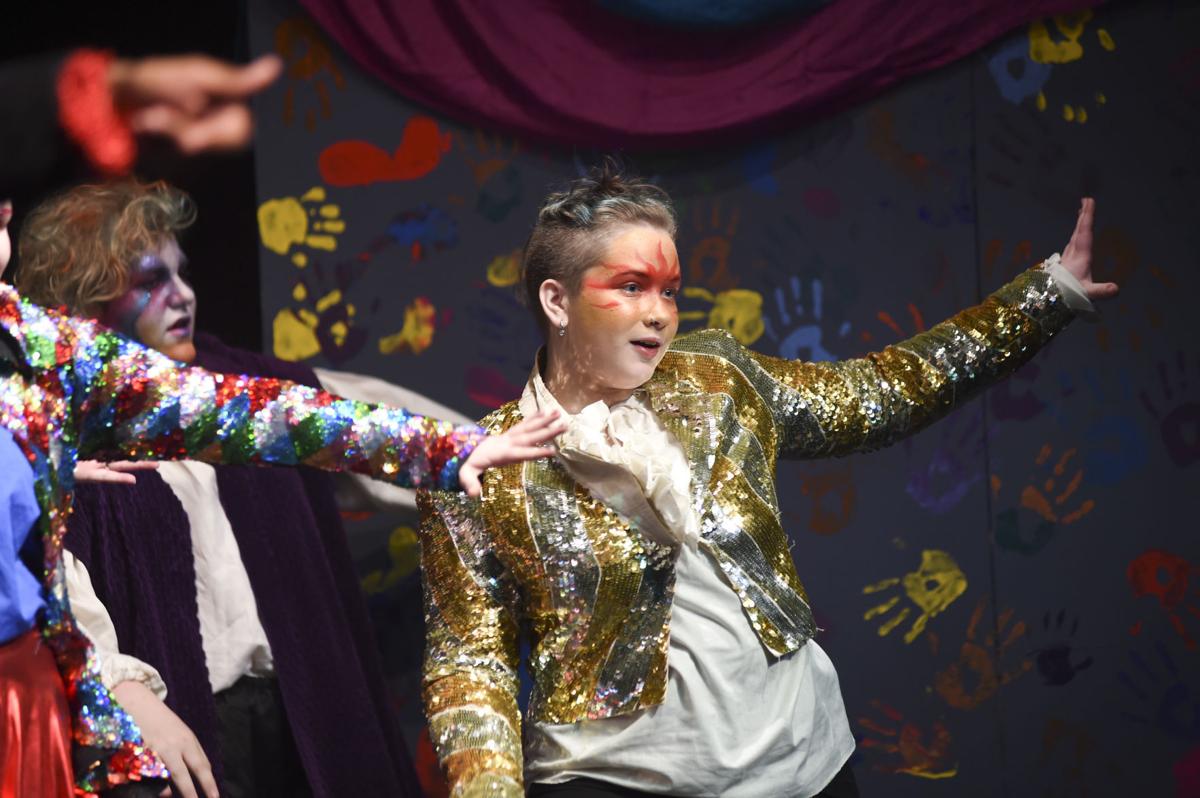 Luce Ayers, one of the musical's troupe of actors, sings the opening song from "Pippin" during a rehearsal this week. The show opens Friday night at the Albany Civic Theater. 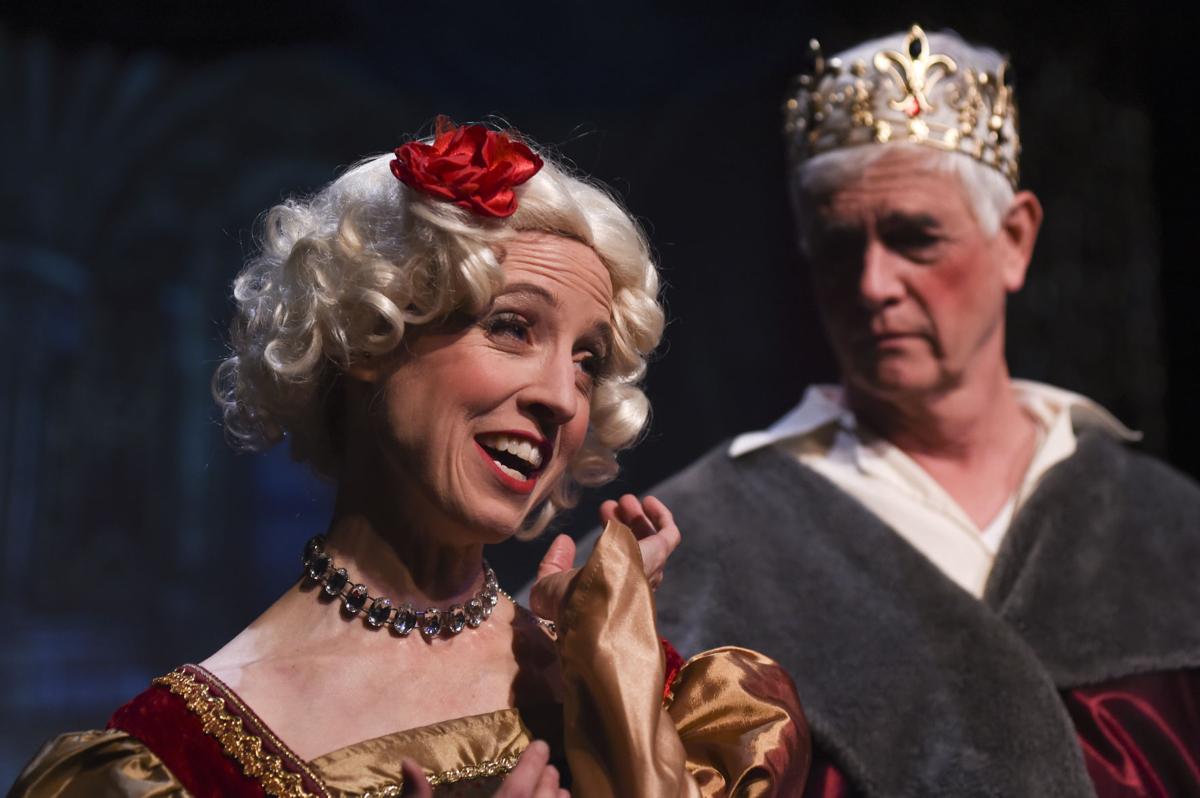 Cathleen Hockman-Wert as Fastrada and Ron Seymour as King Charles perform a scene during the dress rehearsal this week for "Pippin" at the Albany Civic Theater. 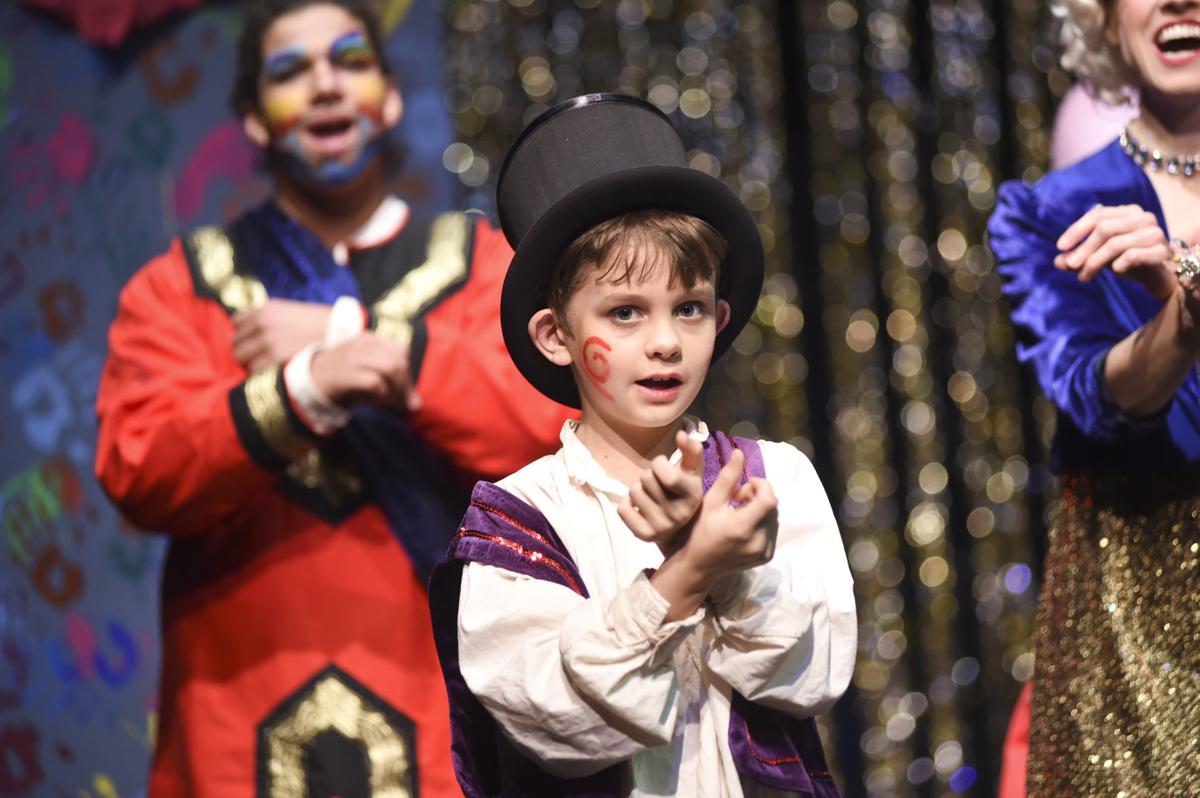 Sebastian Dill participates in the opening song during the dress rehearsal for "Pippin" at the Albany Civic Theater.

When the Albany Civic Theater's production of "Pippin" debuts Friday night, it's possible no one will be happier to see it than director Kay M. Roth.

"It has been on my bucket list for over 40 years," she said.

Roth said she has wanted to direct the Tony Award-winning musical since she was a stage manager during its first performances on the West Coast. That was in 1978 at Mountain Hood Community College in Gresham.

"My college director is going to be in the audience opening night. I'm very excited about that," she said.

The musical, with music and lyrics by Stephen Schwartz and book by Roger O. Hirson, will run the next four weekends at Albany Civic Theater.

The production is the original 1972 version of "Pippin," not the 2013 revival version, which had more of a circus setting, Roth said.

"It's more to do with magic. We do have some magic tricks we will be performing," she said.

The musical begins with the Leading Player, played by Noah Nieves Driver, a newcomer to Albany Civic Theater, and a traveling troupe of colorful and sparkly-costumed actors introducing the audience to the story of Pippin with the song "Magic to Do."

Pippin, played by Jarred Sheffield, is a young prince who is looking for his place in the world — his "Corner of the Sky," in the words of one of the show's songs.

The Leading Player and the troupe break the fourth wall frequently throughout the musical by speaking to the audience, Nieves Driver said.

"We're acknowledging that it's a play, because this is something that the Leading Player and the acting troupe have put together for Pippin, like a play within a play," he said.

The Leading Player serves as a narrator and tries to direct Pippin on what he should do next.

Pippin has just returned from university and is coming home to see his father, King Charles of the Franks (Ron Seymour).

"I really like my father, but we're kind of awkward because he hasn't seen me in a long time," Sheffield said.

Pippin isn't able to talk with Charles much because of interruptions by his stepmother, Fastrada (Cathleen Hockman-Wert) and her brawny, dimwitted son Lewis (Scotty Bowman).

The Leading Player suggests Pippin accompany his father and Lewis into war.

"Pippin thinks he wants to be a soldier, but changes his mind after seeing the war," Seymour said.

The young prince then goes to visit his grandmother, Berthe (Georgiana Rodriguez), in the countryside. She tells him about the "Simple Joys" of life.

Pippin also tries his hand in politics and later falls in love with a widow, Katherine (Jasmine Hancock), who has a small son named Theo (Sebastian Dill and Dallas Headley).

Basically, Pippin moves on from one thing to the next, but nothing is ever enough for him, Sheffield said.

All 17 cast members, except for the Leading Player, portray at least two characters in the musical.

The cast includes a mix of ages from 10 and 11-year-old boys to Seymour, a retired Oregon State University professor who hasn't been on stage in decades.

"I always thought, even when I taught, some day I'm going to do another musical. And this is some day," Seymour said. "Kay gave me a chance, and it's been very fun."

Much like Roth, "Pippin" was also a bucket list musical for Nieves Driver. He moved to Oregon just three weeks before auditions to attend Western Oregon University.

"Pippin is one of my all time favorite shows, like top three," he said.

His favorite part of working on the musical has been the process of putting everything together.

"And I get to make The Leading Player my own," he said.

Nieves Driver, who was in his first musical as an eighth grader, has impressed his director in another way as well.

"One of the things that's really nice is Noah is a dancer, so he has some really cool dance moves that he's able to do," Roth said.

The musical has exceeded Roth's expectations, she said, because her cast has worked so well together.

"I'm excited for them to have an audience. They're ready for it," Roth said.

HOW MUCH: Tickets are $15 for adults, $12 for juniors and seniors. Tickets are available online at albanycivic.org. Help with reserving or purchasing online is available from Sid Stevens Jewelers, 541-967-8140.

Video: Quite a Magic To-Do

The small but bedazzled cast of "Pippin" fill the air with music and magic during a dress rehearsal Tuesday night at the Albany Civic Theater.…

Jarred Sheffield as Pippin, right, and Ron Seymour as King Charles perform a scene from "Pippin." The musical traces Pippin's search for his "Corner of the Sky."

Luce Ayers, one of the musical's troupe of actors, sings the opening song from "Pippin" during a rehearsal this week. The show opens Friday night at the Albany Civic Theater.

Cathleen Hockman-Wert as Fastrada and Ron Seymour as King Charles perform a scene during the dress rehearsal this week for "Pippin" at the Albany Civic Theater.

Sebastian Dill participates in the opening song during the dress rehearsal for "Pippin" at the Albany Civic Theater.