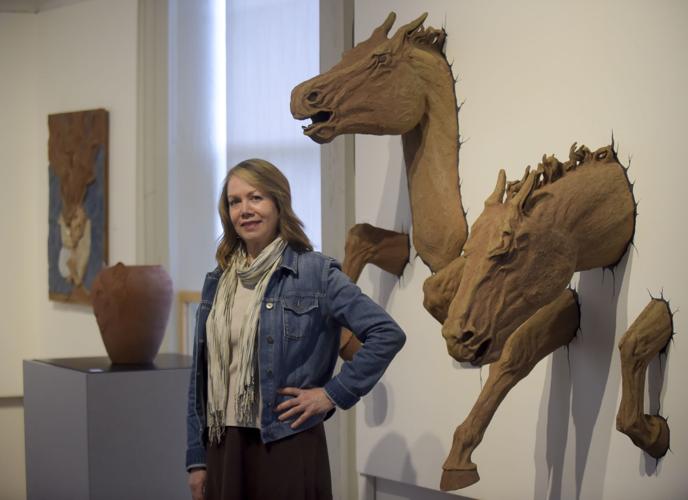 Artist Leslie Green is pictured with her "Wild Horse" sculptures, part of her "Clay and Canvas: A 50-Year Retrospective," now on view at the Benton County Historical Museum in Philomath. 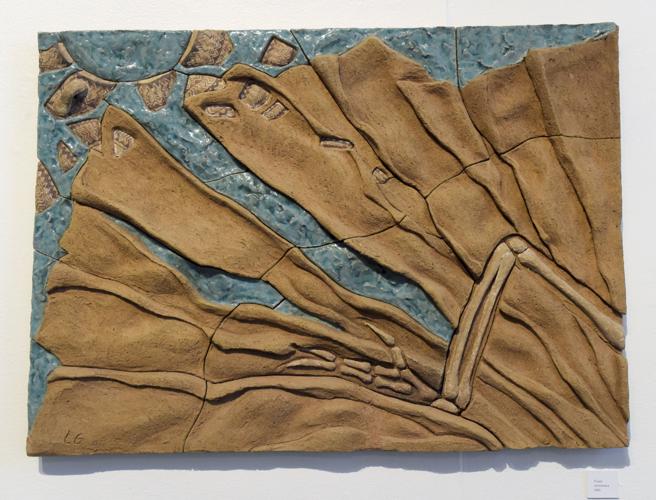 "Fossil Stoneware 1982," by Leslie Green is on display in the Philomath artist's 50-year retrospective exhibit at the Benton County Historical Museum. 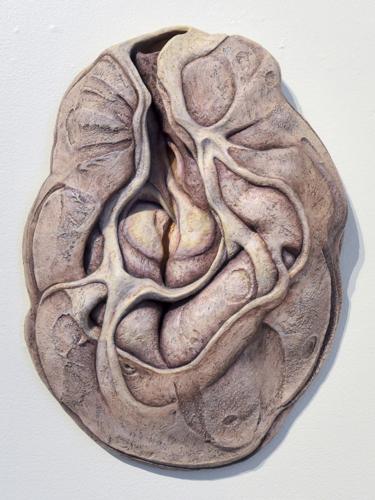 All Art is About the Body stoneware/acrylic 1997 by Leslie Green. 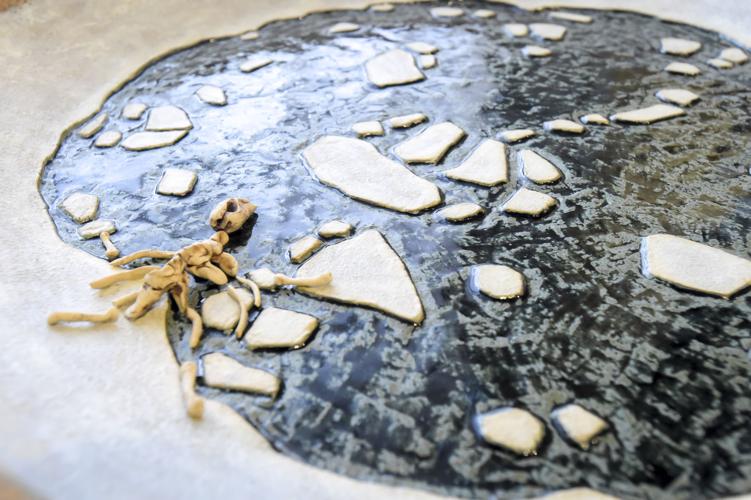 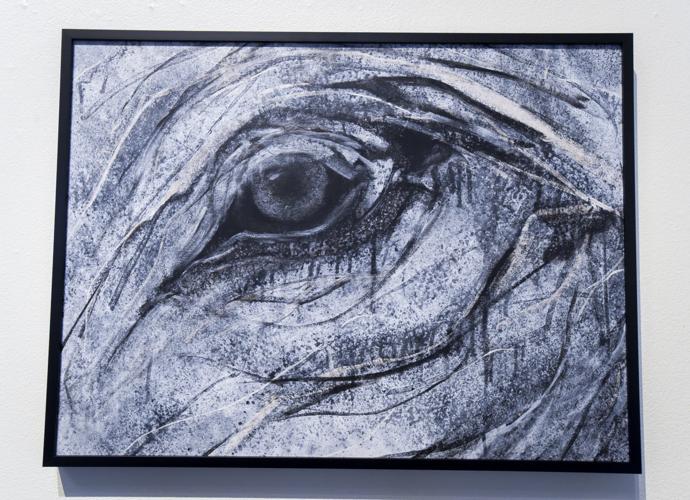 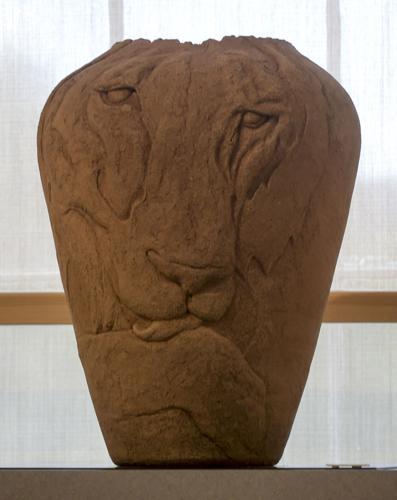 It has always been important to Leslie Green that her artwork show our deep connection to nature and animals.

For five decades, the Philomath potter and painter has followed through on her inspiration.

Green was concerned about animal rights during the mid-1980s and wanted to get involved in the cause.

"I thought I can use the power of art to say something about what's happening to animals, and how they're being exploited," she said.

Green chose the most powerful animal she could think of as her subject, the horse.

She created "Wild Horse," a life-size clay sculpture of a horse head and legs that are portrayed bursting through the wall as if escaping from something.

The sculpture, along with 60 other pieces of her animal and nature-inspired pottery, ceramic sculptures and paintings, are on view in "Clay and Canvas: A 50-Year Retrospective," now on display in the Moreland Auditorium at the Benton County Historical Museum in Philomath. An opening reception is set for Friday night.

The retrospective features bears, elephants, wolves, trees, cave art, and landscapes. It has everything from the first pot Green ever made and early drawings, to abstract paintings she's worked on the past few years.

Each decade is represented by works the 66-year-old artist has done in her career.

"I think there is a consistency in the room for I what I care about, and how I've done it," Green said.

Green became interested in art at 16, when she met ceramics teacher Esther James at a music and art camp run by the University of Southern California. James became her lifelong mentor and friend.

"She was such a strong role model, a master potter, a really intellectual woman and a creative force. After studying with her I knew that's what I wanted to do," Green said.

Green returned to the camp the next three summers, becoming James' assistant the final year she attended.

"It was really important for me to become proficient at throwing pots, because Esther taught it like an art form," she said.

Green went on to earn her bachelor's degree in painting, sculpture and graphic arts from UCLA, and worked as a production potter in her early 20s.

In her late 20s, she came across a large studio space in Santa Monica, where she lived. The studio was 2,400 square feet, had 25-foot high ceilings, a 600-hundred cubic foot kiln and a forklift, she said.

"I saw that and realized, 'This is the next step in my life,'" Green said.

She took out the lease, made some payments on the equipment, and established Terraclay Studio in 1979.

But after six months of working there, Green was overwhelmed. Luckily, a woman who was a screenwriter and fellow sculptor, offered to come in and buy half of the studio, which enabled her to keep it.

"It was a big deal to take this place on, and then realize I had to make this work. I was committed to it," Green said.

In a dozen years at Terraclay Studio, Green made the "Wild Horse" sculpture, which is on display in the exhibit. She originally created three of the pieces and sold them. Over three years, she made around 10 more horse sculptures. She also produced large, architectural scale ceramics including murals and vessels, as well as pots for different clients all over the country.

During that time, she also worked as a legal secretary to support herself.

Green moved to Portland in 1991 and worked at a small studio called Thurman Street Studios for a couple of years.

She and her partner Gary Gibson, a retired biologist and photographer, found their home in Philomath in 1993.

"We live in the woods and there is a beautiful studio here in a separate building, so I'm very fortunate," she said.

Green teaches ceramics classes in her 1,000-square foot home studio, and has taught classes in raku, a type of Japanese pottery, part-time at Linn-Benton Community College since 1996.

She has exhibited her works in galleries all over the country and state. Green's shown locally at the historical museum and a few times at The Arts Center, including in the "Around Oregon" annual exhibit.

Green was one of the early members of the annual Philomath Open Studios Art Tour, but hasn't participated in the past six years. (Many of the artists from the Open Studios tour are featured in a new exhibit at Oregon State University; see the story on C1 for details.)

Four years ago, Green set aside the clay in favor of a new medium.

"I was feeling some real limitations of working with clay, because once you fire something you can't change it," she said. "I thought, what I'm trying to say, I can say in paint too."

She found a mentor in Corvallis painter Bill Shumway.

Green said her first paintings, focused on capturing black and white close-up images of the eyes of elephants and rhinoceros that felt threatened. Shumway suggested she move into color and explore abstraction.

"His feeling was I can do black-and-white really well, but I needed to push myself," she said.

Green admits she didn't have a theme or groove for a long time, until she looked out of her window and really studied the branches of a nearby wild hazelnut tree.

"The branches are incredible and do all sorts of unpredictable things," she said.

Green uses the lines of the hazelnut tree limbs as a guide to define space in her paintings.

"I'm playing with that and bringing it in a landscape perspective. At some point, I will get back to animals, but right now I'm on another road," she said.

"It's always been important to me to just keep growing and changing. I never just settle in doing one thing all of the time," Green said.

And she credits Esther James, who died May 2 at 91, for helping her commit to a creative path 50 years ago.

"I feel now, looking around the room of the show that she was right. I did the right thing by following her," Green said.

WHAT: "Clay and Canvas: A 50-Year Retrospective," by Leslie Green

WHEN: Exhibit is on display through July 7. A reception is scheduled Friday, June 1, from 5 to 7 p.m.

The winter season can pose a challenge for artists. Festivals and farmers markets come to a close, and it’s difficult to find a physical space to sell art out in the rain and cold.

Artist Leslie Green is pictured with her "Wild Horse" sculptures, part of her "Clay and Canvas: A 50-Year Retrospective," now on view at the Benton County Historical Museum in Philomath.

"Fossil Stoneware 1982," by Leslie Green is on display in the Philomath artist's 50-year retrospective exhibit at the Benton County Historical Museum.

All Art is About the Body stoneware/acrylic 1997 by Leslie Green.