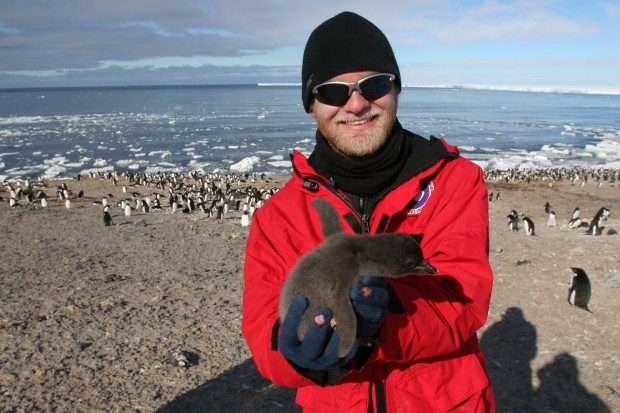 Noah Strycker holds a young Adélie penguin during a three-month stay on Cape Crozier in Antarctica. The OSU grad wrote about his experience in a book, "Among Penguins: A Bird Man In Antarctica," out this month via OSU Press. (Contributed photo) 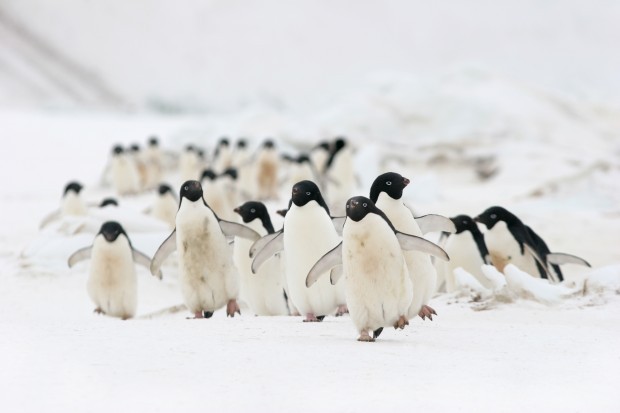 A group of Adelie penguins marches along the ice on Cape Crozier in Antarctica. (Noah Strycker | Contributed photo)
By TYLER HANSEN | The Entertainer

CORVALLIS — Noah Strycker is one of those people whose exploits cause you to take a long, somber look in the mirror and say, “What the hell am I doing with my life?”

Here’s a guy — an Oregon State University graduate — who has traveled to and studied birds on four continents. He lived with penguins on Antarctica for three months. On his first attempt, he wrote a book so good that even people with zero interest in avian research can’t put it down.

Strycker did all this before he turned 25. It’d make you want to puke if he weren’t so nice and if the things he writes about weren’t so engrossing.

As it is, his debut book, “Among Penguins: A Bird Man in Antarctica,” is out this month via OSU Press and is available at various locations. (See box at left.) It’s a 201-page, first-person narrative of his time on the coldest and most isolated place on Earth.

Strycker’s life is perpetually in “go” mode, which makes the task of sitting still long enough to write a book a foreign concept to the Creswell native and resident. He ran his first Portland Marathon at age 13, was the No. 1 singles player on OSU’s club tennis team and counts skiing among his hobbies.

It’s the last item that, by chance, propelled Strycker to pen “Among Penguins.”

“I survived three months in Antarctica without a scratch, and then I got home to Oregon, went skiing two weeks later on Mount Bachelor, jumped a cliff and broke my leg,” he said.

For the first time in perhaps his entire life, Strycker, who prides himself on his ability to pack up and move anywhere on a moment’s notice, was stuck in place.

“I was in a cast and on crutches for three months and found myself at home with my parents,” he said. “Then I got an email from a woman (Mary Braun) at OSU Press, who had been reading my blog while I was in Antarctica. She asked if I’d be interested in writing a book.

Traveling to Antarctica is an opportunity so rarely afforded anyone that writing a book about the adventure seems a natural response. Where Strycker succeeds —  and where many others undoubtedly would fail — is in giving such a book an across-the-board, entertaining appeal while also staying true to the purpose of his journey: conducting intense research for the National Science Foundation, as well as OSU and other organizations.

“Among Penguins” starts like an adventure novel might, with Strycker and his two research companions waiting out a 36-hour, subzero hurricane of a blizzard inside a 9-foot by 15-foot hut. The blizzard’s wind gusts of over 100 mph ravaged Strycker’s one-person tent, where he slept on a sleeping pad on solid ice, with no heat source other than 20 pounds of extreme-cold-weather clothing.

(Side note: Changing clothes requires removing clothes, which isn’t a fun activity in Antarctica, so Strycker once wore the same set of underwear for five straight weeks. He also was unable to shower for the duration of his stay on Cape Crozier.)

The author’s style is intelligent and fun, and the short, lively chapters make the 201 pages a quick read. He tosses in some silly commentary here and there, perhaps in an effort to make his college buddies laugh, but he’s quick to bring the focus back on the penguins. They are, after all, his obsession.

Strycker left for Antarctica five months after graduating from OSU, a decision that puzzled many of his friends who didn’t understand the appeal of penguins.

“Why don’t you go to the zoo?” one friend asks in the book. Strycker finally settles on the best answer:

“Because I’m addicted to birds.”

Most college-aged guys are addicted to chasing girls or Bud Light (or both). Strycker, while not necessarily averse to either of those two, indulges his avian addiction at every chance. He recently finished a four-month internship in Costa Rica, and he’s also studied birds in Panamá, Hawaii, the Galápagos Islands, Australia and elsewhere.

But Antarctica, with colonies of more than 270,000 Adélie (pronounced uh-deli) penguins to research, resonated on a level most other places did not.

“Being out in totally remote wastelands of ice and having every day be totally isolated was a really amazing experience,” said Strycker, who was there from November 2008 to February 2009. “You wake up and you know what you’re going to do: You’re gonna go outside and look at penguins all day. I really liked that lifestyle.”

Interwoven with interesting facts about his subjects, the book relates many of his interactions with the Adélies, curious creatures largely unafraid of humans. On Strycker’s first day in the field, one penguin sized him up, took a look at his boots and untied the laces with its beak. Moments later, a younger penguin rushed at Strycker and pummeled his shins with its flippers.

“Penguin flippers are stronger than they look,” the author writes, lamenting the bruises the one-sided battle caused.

Strycker has birding experience well beyond his years, having seen about 2,000 bird species in his lifetime. But the trip to Antarctica provided a glimpse of something that caught him off guard.

“It was interesting to see all the dead penguins on the ground, frozen and mummified, some that were hundreds and even thousands of years old,” said Strycker, whose book contains a glossy, 16-page color insert of photos. “They’re really everywhere. You crunch your way over them as you’re walking. I didn’t expect to see so much death.”

The survival of the Adélie penguins, in fact, was the purpose of his excursion south. The ongoing study aims to determine how the Adélies are adapting to Earth’s climate change, and Strycker said the population he studied is doing quite well and its place on “The Ice,” as it’s called, is secure for now.

That’s good news all the way around. It also gives Strycker the green light to return to the place he fell in love with.

“Hardly anyone gets to go to Antarctica, and they say those who do often get bit by the ‘polar bug,’ ” he said. “That might’ve happened to me. I’m already looking for a way to go back down there.”

WHAT: “Among Penguins: A Bird Man in Antarctica,” a book from Oregon State University Press by Noah Strycker

Billie Eilish: People don't know anything about me

Billie Eilish: People don't know anything about me

Demi Lovato reveals what led to their 2018 overdose

Demi Lovato reveals what led to their 2018 overdose

Elizabeth Olsen has secretly been married for months

Elizabeth Olsen has secretly been married for months

Noah Strycker holds a young Adélie penguin during a three-month stay on Cape Crozier in Antarctica. The OSU grad wrote about his experience in a book, "Among Penguins: A Bird Man In Antarctica," out this month via OSU Press. (Contributed photo)

A group of Adelie penguins marches along the ice on Cape Crozier in Antarctica. (Noah Strycker | Contributed photo)
© Copyright 2021 Gazette-Times, 1835 NW Circle Blvd Corvallis, OR | Terms of Use | Privacy Policy
Powered by BLOX Content Management System from TownNews.com.
You don't have any notifications.