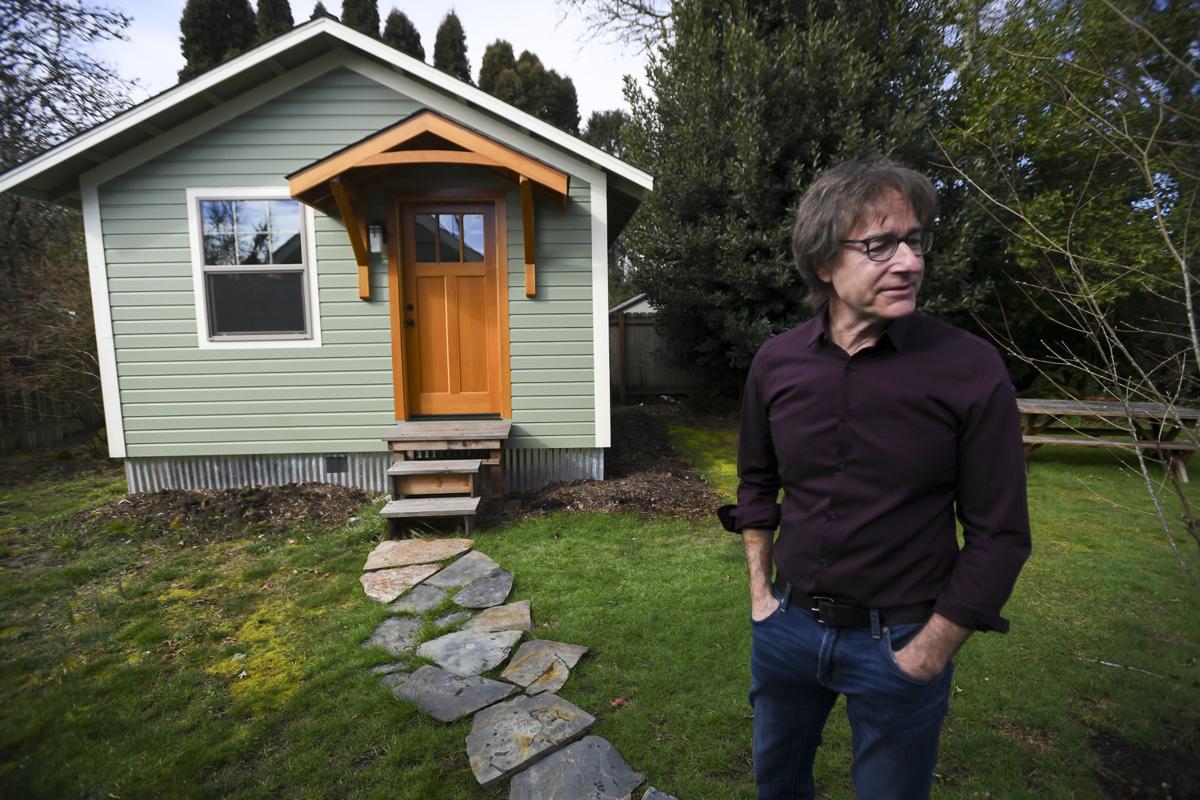 Keith Scribner stands outside the new writing shed he and his family built at his Corvallis home. His previous novels, including his new one, "Old Newgate Road," were written in his children's playhouse, which is much smaller than the new shed. 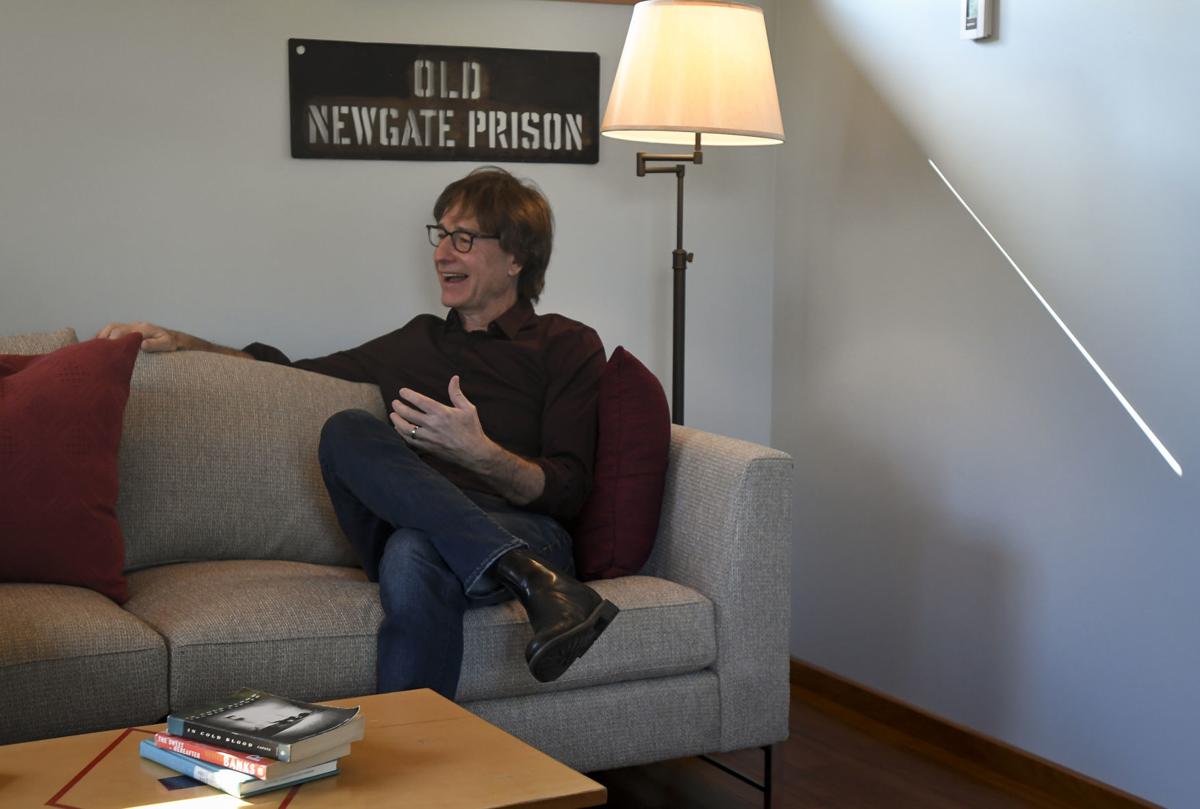 Keith Scribner talks about his new novel, "Old Newgate Road," in the writing shed he built in the back yard of his Corvallis home. The sign behind him is a relic from the Old Newgate Prison, located near where Scribner set his novel and where he spent part of his childhood. The sign was a gift from his father.

Keith Scribner grew up in Connecticut, where he worked for a bit on a truck farm and where some of his friends worked in the nearby tobacco fields, so he had that background to draw upon for his new novel, "Old Newgate Road."

And Scribner's resume includes stints as a carpenter, so he knows something about wood — information that was useful as he created his protagonist, Cole Callahan, an Oregon contractor who returns to his family home in Connecticut, ostensibly to reclaim some of the valuable wood in a tobacco shed.

But to fully research domestic violence, which plays a prominent role in the novel, Scribner, thankfully, was not able to draw on personal experience.

So he hit the internet, reading accounts from domestic violence survivors and learning about how that violence can scar generation after generation in a brutal cycle, a key theme in "Old Newgate Road."

It was a sobering experience — first, to realize how much material about domestic violence is on the internet.

"The research for that is easy to find," Scribner said in a recent interview with The E.

But that led to the second lesson: "It's not easy to read."

All those strands come together in "Old Newgate Road," as Callahan returns to his family home for the first time in 30 years — and finds that, in many ways, he's not prepared for the homecoming.

Scribner, a professor of creative writing at Oregon State University, will read a brief excerpt from the novel at an event Friday night at OSU. (See the related story for details of the event.)

He'll also be joined by his editor, Gary Fisketjon of Alfred A. Knopf, for a broader discussion about writing and editing.

Despite the harrowing subject matter, Scribner said he also set out to write a "fast-paced, exciting novel," with plenty of twists and turns.

"It takes you into some dark places, for sure," he said, "but it's not just that we burrow down into a dark place and stay there. ... I didn't want to write a dark book."

And, in fact, he noted, "Old Newgate Road" was a surprisingly easy sell: His agent, Kimberly Witherspoon, liked the swift pacing of the novel and the editor, Fisketjon, bought it immediately.

And Scribner said Fisketjon's edits helped with that pacing: One of his suggestions was to remove a thread in the novel that wasn't essential to the plot. Scribner at first resisted, but a second opinion weighed in: Scribner's wife, the poet Jennifer Richter, agreed with Fisketjon. The thread came out.

Fisketjon made another suggestion that Scribner more readily embraced: Even though the past haunts the pages of "Old Newgate Road," he advised, remember that its characters are nevertheless living in the present: "An author does need to be reminded in a novel that's about the past to not forget that these characters are living present lives too," said Scribner, 57.

The book, with its tricky time transitions between 2009 and 1979, required meticulous plotting, and so Scribner lined the walls of the playhouse where he did most of the writing with 3-by-5 inch note cards. And he wrote and rewrote, creating 14 drafts of the book. He reworked certain passages some 50 times.

As for that tiny playhouse, it was built years ago by Scribner and his children. The same crew recently finished work on a larger writing shed in his Corvallis back yard, where the author is tackling projects for OSU's creative writing department and starting to think through his next book, which will place an American protagonist in the Ukraine. It's a project that grew out of Scribner's fascination with Ukrainian indie music.

But in the meantime, he has "Old Newgate Road" to promote, and is grateful to readers who have praised its authentic details of life growing tobacco in rural Connecticut. In fact, he recently appeared on a podcast devoted to the subject of cigars run by a magazine in Miami and was startled when the Cuban-American host told him: "This book is a Cuban story."

Scribner pressed for an explanation, and the host obliged: "All Cubans left trauma and devastation behind. When we go back to Cuba, it's there waiting for us. Nothing has changed."

"I was thrilled to hear that," Scribner said — in part, because that's exactly what happens to his protagonist in "Old Newgate Road."

"When you leave trauma behind, and you go back 30 years later, guess what? It's still waiting for you."

WHAT: Author and Oregon State University professor Keith Scribner will read from his latest novel, "Old Newgate Road," and discuss his work with his editor, Gary Fisketjon of Alfred A. Knopf.

HOW MUCH: The event is free.

OF NOTE: A book-signing will follow. The reading and conversation are part of the 2018-2019 Literary Northwest Series, which brings accomplished writers from the Pacific Northwest to OSU. This series is sponsored by the MFA Program in Creative Writing at OSU, with support from the OSU Libraries and Press, the OSU School of Writing, Literature, and Film, the College of Liberal Arts, Kathy Brisker and Tim Steele and Grass Roots Books and Music.

Keith Scribner stands outside the new writing shed he and his family built at his Corvallis home. His previous novels, including his new one, "Old Newgate Road," were written in his children's playhouse, which is much smaller than the new shed.

Keith Scribner talks about his new novel, "Old Newgate Road," in the writing shed he built in the back yard of his Corvallis home. The sign behind him is a relic from the Old Newgate Prison, located near where Scribner set his novel and where he spent part of his childhood. The sign was a gift from his father.